There are certain things that our body needs in large quantities in order to function. Conversely, there are certain substances that run the show simply by being present in small amounts. One such type of substances are hormones. Commonly referred to as chemical messengers, hormones are substances that control or influence a large number of our processes by being present in small quantities in our blood.

Exocrine And Endocrine Glands And Differences Between Them

Before proceeding, we should familiarize ourselves with these 2 terms. In essence, exocrine glands are those glands that directly release their secretion into the target organ or tissue. The target organ/tissue is the one that will react to the secretion of the gland.

Alternatively, endocrine glands are those that release their secretions into the bloodstream. The blood then carries the substances throughout the body until it reaches its target organ. These secretions are useless or will have no effect on organs or tissues that don’t possess specific receptors for the secretions, i.e., those that aren’t the target organs.

Another way of differentiating between the two terms is that exocrine glands have ducts for the transport of their secretions, whereas endocrine glands are ductless. Sweat glands, for instance, are exocrine glands, and have specific ducts. Alternatively, the pituitary gland is an endocrine gland, and lacks these ducts.

Hormones are the secretions of endocrine glands. The endocrine system works along with the nervous system in bringing balance to our body and controlling various actions. While the latter employs the use of electrical impulses, the former uses hormones.

Let’s take a look at some of the major endocrine glands and the functions of their hormones.

Examples Of Endocrine Glands And Their Functions

Located in the skull, in a crevice of the sphenoid bone, the pituitary is a pea-shaped gland and is one of the most important endocrine glands. It can broadly be divided into the anterior and posterior pituitary. Both of these regions secrete different hormones that have different effects. The anterior part of the pituitary is controlled by signals from the hypothalamus, whereas the posterior part works on nervous stimulation.

The anterior pituitary secretes growth hormone (GH). This controls the growth of our muscles, bones, etc. As expected, this hormone can drastically affect an individual’s appearance. Too much or too little of GH leads to dwarfism or gigantism, respectively. 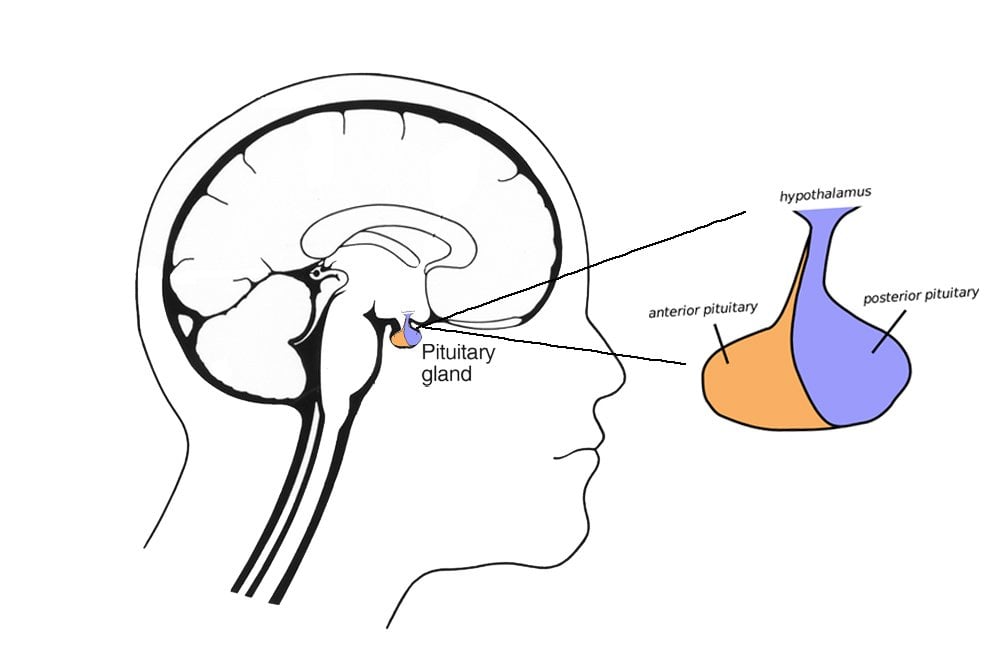 Also Read: What Is The ‘Master Gland’ In Our Body?

The anterior pituitary also secretes a class of hormones known as tropic hormones. These affect the growth and functioning of other endocrine glands. For instance, it secretes TSH (thyroid-stimulating hormone), which affects the secretion of thyroxine by the thyroid gland. Similarly, it secretes Adrenocorticotropic hormone (ACTH), which controls the secretions of the adrenal gland, and gonadotropic hormones, which affect the development and maturation of the gonads, or the sex organs.

The posterior pituitary secretes ADH or anti-diuretic hormone. This determines the amount of water that is reabsorbed by the nephrons of the kidneys during the process of urine formation. Therefore, it controls the concentration of urine. The posterior pituitary also secretes oxytocin. This hormone is responsible for causing contractions in the uterus during childbirth.

Often said to be butterfly-shaped, this popular gland is located in the neck, and is situated roughly above the Adam’s apple. It secretes two hormones – thyroxine and triiodothyronine. Thyroxine is the inactive form of the hormone. It is said to control the basal metabolic rate and play important roles in digestion, brain functioning, maintenance of our bones, etc.

The body requires sufficient amounts of iodine to produce the hormones of the thyroid gland. A lack of iodine causes major problems. When this situation occurs, the anterior pituitary releases TSH. This causes the thyroid gland to grow in size, but the production of the hormone doesn’t increase due to insufficient iodine. This is why a swollen neck is the most common symptom of thyroid malfunction. 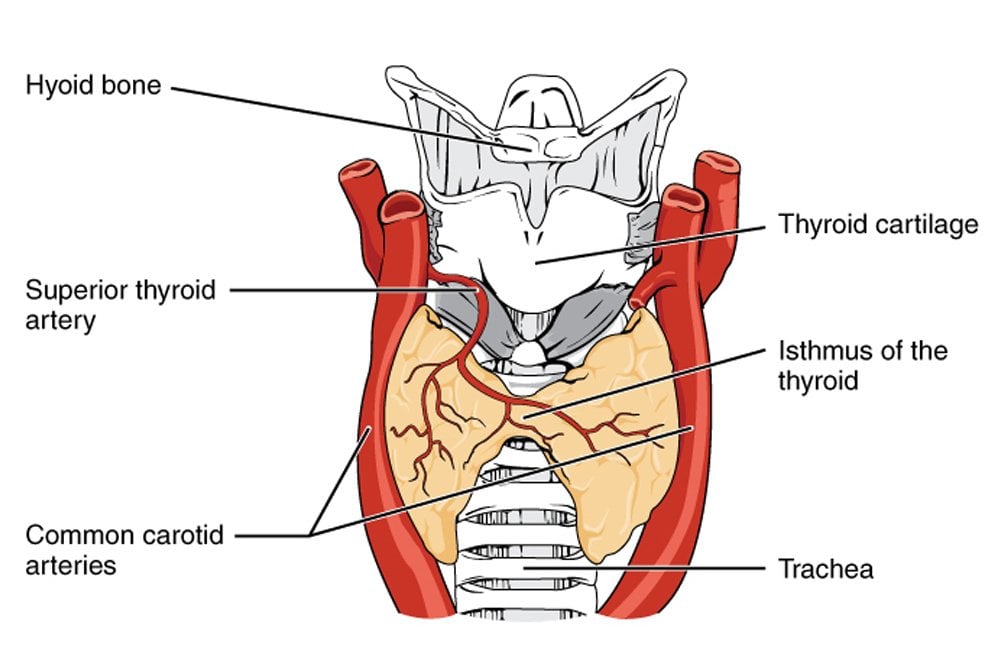 These are paired glands that sit like caps on kidneys. The adrenal gland can be divided into a medulla and a cortex, both of which secrete different hormones. From a survival perspective, the adrenal cortex is more important than the adrenal medulla. The cortex secretes certain hormones, such as mineralocorticoids, glucocorticoids, etc. These are responsible for the maintenance of the concentration of certain substances, like sodium ions, glucose molecules, etc. in our bloodstream. The adrenal medulla secretes epinephrine and norepinephrine. These hormones prepare our body for the fight-or-flight response, i.e., they induce changes like increased heart rate and dilated pupils, which are required to fight a situation or run from it. 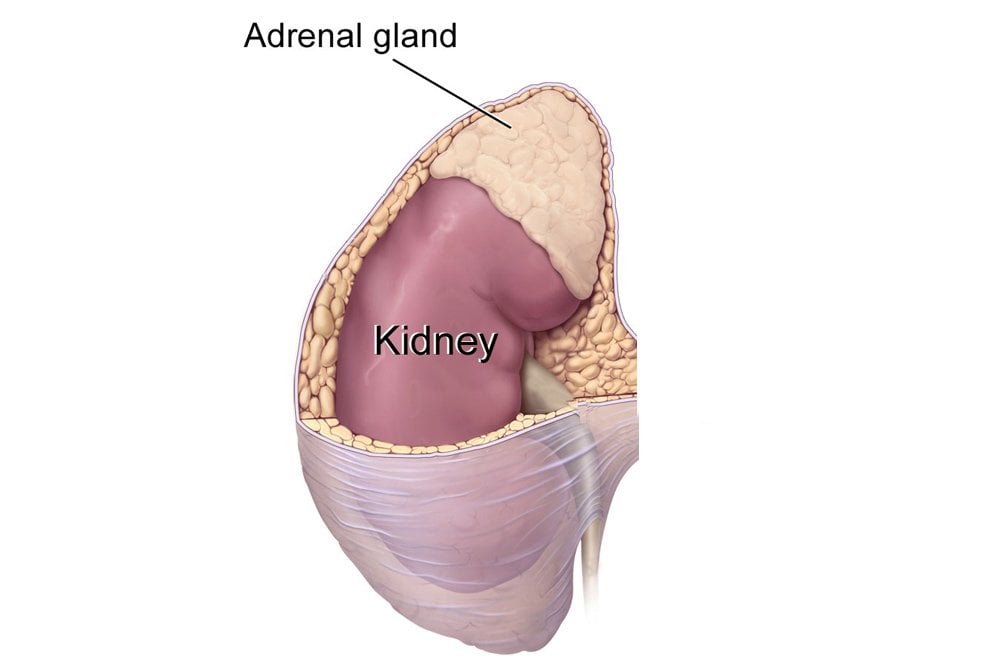 The pancreas is a special gland that functions as both an exocrine and an endocrine gland. They secrete enzymes that break down proteins, lipids and other molecules as part of their exocrine function. Their endocrine aspect is called the Islets of Langerhans. This region secretes insulin, glucagon and somatostanin. Insulin converts free sugar molecules in our blood to glycogen – their stored form – thus reducing our blood sugar levels. Glucagon does the reverse of this, thereby converting glycogen molecules to glucose and increasing our blood sugar levels. Somatostanin controls the cells that secrete these 2 hormones. 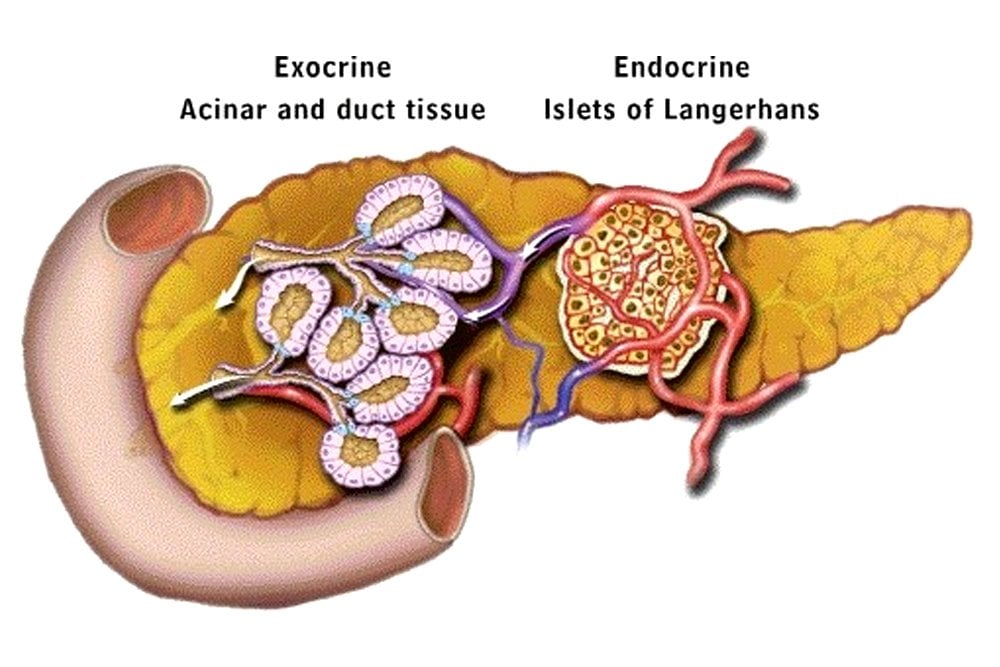 Also Read: What’s The Difference Between Hormones And Enzymes?

Gonads, which are the reproductive organs in humans, also secrete hormones to help with their various functions. In males, it is the testes, while in females it is the ovaries. The hormones of the testes are called androgens, with the most commonly known one being testosterone. These hormones are responsible for key male characteristics, such as the development of the male reproductive system, sex drive, growth of body hair, etc. In females, the ovaries secrete oestrogen and progesterone. These hormones are responsible for the development and expression of female characteristics, such as the development of breasts, regulation of the menstrual cycle, maturation of the female reproductive organs and structures, etc.

While these are the major endocrine glands, our body has others, such as the placenta, thymus, etc. Most of the regulation of these hormonal secretions is done through the negative feedback mechanism, although there are some exceptions to this. Hormones are extremely important for our normal functioning, and hormonal imbalances can lead to various problems starting from minor ones like extra hair growth, to extreme ones like mental retardation.