It is indeed possible to convert base metals like lead into gold, but you won’t get much gold out of it!

Have you ever dreamed of becoming rich overnight? Well, what if you could make gold out of other metals like lead?

That’s what alchemists of the Middle ages were trying to achieve. Their target was a substance that went by many names, “Philosopher’s Stone”, “Elixir”, or “Tincture”, that could confer immortality, youth, and mercy from all illnesses, as well as untold riches to those that possessed it. The Elixir’s could convert any base metal, such as lead, into a precious piece of glittering gold. Converting one element into another is called transmutation.

The Elixir was the stuff of legends and no alchemists could convert lead into gold truly since no ordinary chemical reaction can transmute one element into another. 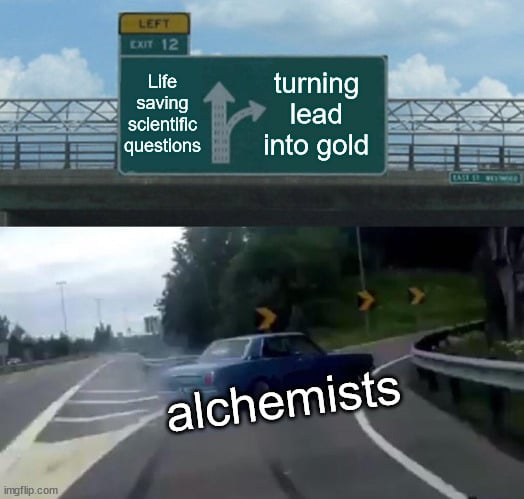 The alchemists were up to some suspicious stuff in the middle ages.

However, could scientists of the modern world, with our increased chemical knowledge and superior tools, be able achieve this chemical feat?

What is an element?

Transmuting lead into gold means converting one element into another. Each element is defined by the number of protons (called the atomic number) and neutrons (protons + neutrons = mass number) that make up its nucleus; the number of electrons aren’t as crucial to an element’s identity.

To change one element into another, one must change the number of protons in the nucleus.

Changing the number of neutrons (while keeping the number of protons constant) in the nucleus results in different flavors of the same element, called isotopes. Lead has four naturally occurring isotopes and a plethora of others that have been created in the lab.

An explanation of an element’s composition. (Photo Credit : Tom29739/Wikimedia commons)

Converting one element into another

These subatomic particles are bound by strong nuclear forces that keep the nucleus stable. Trying to overcome these forces requires tremendous amounts of energy.

Both these actions release an inordinate amount of energy in the process.

But what if you did succeed in changing the composition of the nucleus? Unfortunately, this gives the element an identity crises by disturbing the equilibrium of forces within the element. The element starts sneezing out subatomic particles to achieve a more stable state, like what happens in radioactive decay.

What Is The Smallest Particle We Know?

Most elements after Bismuth in the periodic table are radioactive.

Radioactive decay isn’t a great way to produce gold. First, radioactive elements take months, if not years or millennia, to decay into more common elements. Radium-226 takes 1600 years to decay half of itself. Second, radioactive emissions can cause illnesses like cancer and thyroid problems.

Third, uranium, thorium, and radium all finally turn into lead after they’ve finished decaying. Lead is stable and doesn’t decay any further, which is sad considering that gold has only 3 protons less than lead.

Nuclear transmutation in a nuclear reactor

With radioactivity ruled out, what other method could be used to convert lead into gold? Well, there are a few options.

The earliest experiments in transmuting a base metal into gold come from 1924. Independently, researchers Nagoaka in Japan, and Miethe and Stammreich in Germany converted mercury into gold by subjecting mercury to high electrical currents. Later researchers who performed such experiments achieved negative results, throwing these findings into controversy. Thus, electrocuting mercury might not be the answer.

If you have a large stock of lead that you need to use, a 1996 experiment found gold after subjecting lead to 600 MeV of protons.

How much gold can you make?

If you’ve started daydreaming about getting rich by making gold, allow me to crush your dreams.

First, most of the gold was radioactive, which means that it will probably decay. Unfortunately, there is no chemical way to convert radioactive gold into normal gold.

Second, all these experiments obtained gold in quantities of less than 1 mg. The gold was often detected only in trace amounts. One account writes that the gold obtained by Miethe and Stammreich’s was only worth 1 dollar, but cost them 60,000 dollars to make! You’d be extremely deep in debt by the time you got any usable gold out of such experiments. 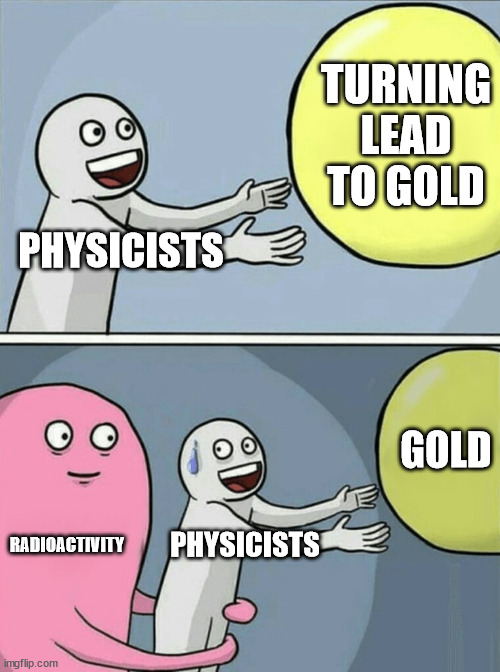 The researchers that performed these experiments were more interested in the behavior of atoms and their subatomic particles, as opposed to actually making a fortune in gold. Even if some of these researchers were money-minded, they’d be more likely to make it rich by discovering something of some actual use (like an infinite and sustainable source of energy).

Scientists have used their transmuting technologies to create new elements. Elements like Promethium, Technetium and many elements in the lanthanide and actinide series are manmade. In 2020, researchers reported creating a new element with an atomic number of 113 by smashing zinc atoms with bismuth atoms. One researcher working on the project reported that it took more than 4 billion collisions to make the element only three times.

Basically, who cares if we can’t make gold out of lead? Scientists are working on even cooler projects—hopefully, some will benefit all of us!