The reduction of urine, achieved in search of the philosopher’s stone, led to the discovery of phosphorus, an element with an eerie glow—and one of the fundamental elements composing life on Earth.

The art of Alchemy and the legend of the Philosopher’s stone is no mystery to us. Everywhere from ‘The Alchemist’ to ‘Harry Potter’, we come across references to the Philosopher’s stone—the elixir of life that can transform any metal into pure gold. In the 17th century, many scientists and philosophers, including Sir Isaac Newton, were engrossed in this mystic art of spirituality and science. 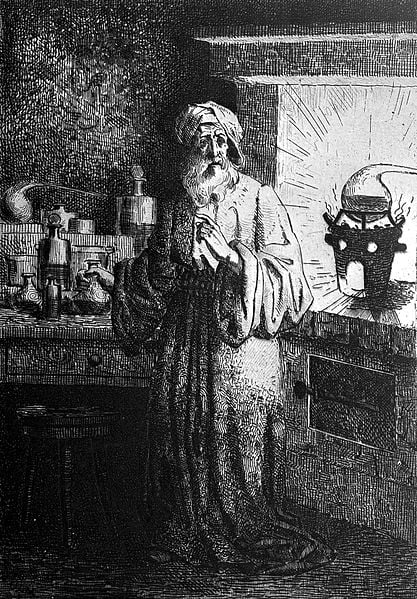 The magic ingredient in Hennig’s quest for the stone was urine. Back then, urine was called the ‘golden stream’ due to its resemblance to the color of gold. The golden yellow color of urine made it an interesting choice among alchemists who were in search of gold.

Brandt collected almost 50 buckets of urine, in the belief that the philosopher’s stone could be extracted from it.

Brandt’s Recipe for the Philosopher’s Stone

Firstly, Brandt let the urine putrefy for days in his cellar. Later, he boiled the rancid urine to get rid of all the water, which resulted in the formation of a thick, smelly, yellow syrup.

Brandt discarded the salt and mixed the black syrup with the red oil again. He heated the mixture strongly for about 16 hours, hoping that it would materialize into the philosopher’s stone.

Finally, after a long struggle, he observed white fumes filling up the retort, which then burst into bright flames with an enthralling glow. He later passed the substance to a receiver with cold water and noticed a white, waxy substance solidifying within it.

The substance he had discovered was enchanting. In the dark, the white solid seemed to glow with a faint green light, and when left out in the air, it seemed to liberate a white fume and burn with a bright glow.

He described the phenomenon as “cold fire” and named the substance ‘Phosphorus,’ which meant “The Bearer of Light” (In Greek, ‘phôs’ means ‘‘light’’, and ‘phoros’ means “bearer”). 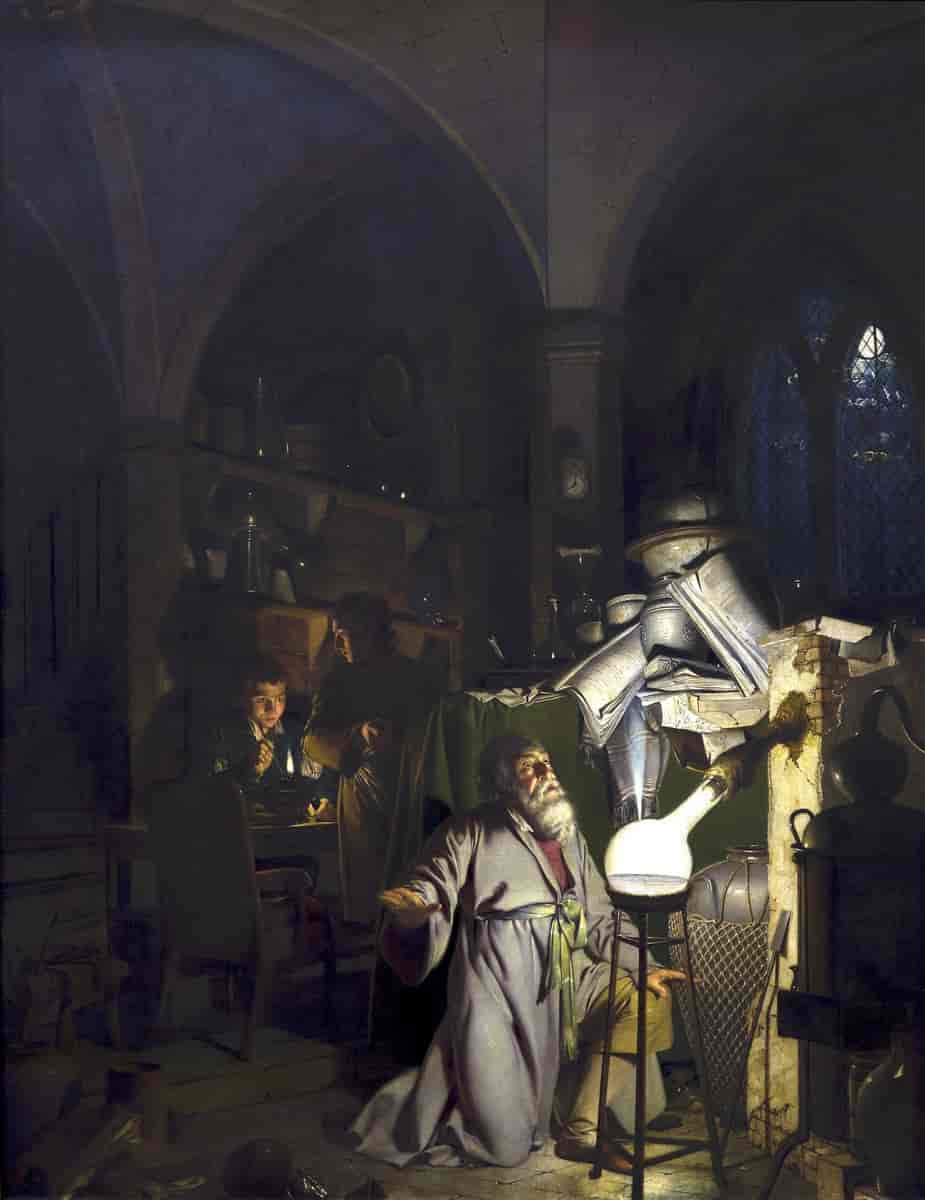 Brandt was certain that he had discovered something majestic, but little did he know that his discovery would later transform the world and all the life in it.

How did Brandt Extract Phosphorus?

Yes, Henning Brandt did in fact discover phosphorus from urine, but how? 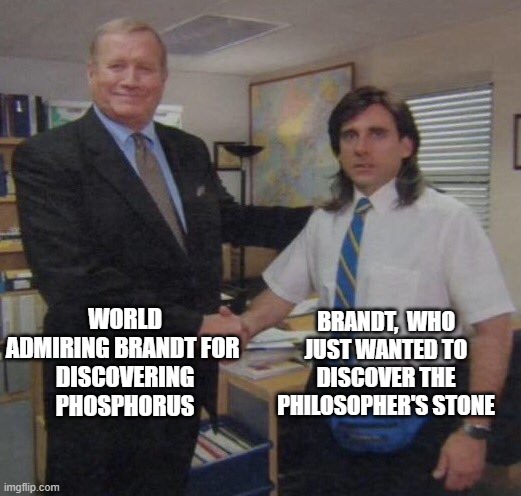 The human body contains small amounts of phosphorus, mainly in our bones, teeth, and urine.

When Brandt evaporated the urine, it resulted in the formation of something called ammonium sodium hydrogenphosphate. Upon further heating, this reduced into sodium phosphite.

Later, upon strongly heating the substance with charcoal, the sodium phosphite decomposed to give white phosphorus and sodium pyrophosphate.

This white phosphorus is what was deposited as the waxy white substance.

A Brief Note on Phosphorus

Phosphorus is a strange element. It is one of the fundamental elements making up life on Earth, but it doesn’t exist as a free element in nature. Just as carbon exists as diamond or graphite, phosphorus also exists in nature as allotropes, namely red, white, and black phosphorous.

Among these, white and red phosphorous are non-metals, whereas black phosphorus is a semi-metal. Here, we are dealing with white phosphorus, so let’s discuss it in detail.

White phosphorus is a white, waxy solid that is extremely toxic and highly reactive. It consists of 4 phosphorus atoms held together by bend-shaped bonds called “banana bonds”. 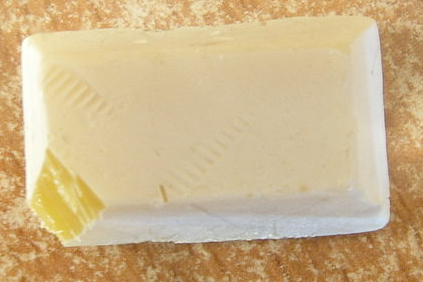 Sometimes, white phosphorus may look slightly yellow due to the presence of impurities; giving it the name ‘yellow phosphorus’. (Photo Credit : BXXXD/Wikimedia commons)

What’s With All the Glow?

Two notable features of phosphorus during Brandt’s discovery were its faint green glow and the bursting bright flame. What causes these?

Why Does Phosphorus Glow in the Dark?

One of the most amazing properties of white phosphorus is its mesmerizing glow.

Whenever we hear the term ‘glow in the dark’, the image of a bright neon radiance pops to mind, but the glow of phosphorus isn’t that distinct. In the dark, it merely exhibits a faint, bluish-green glow. 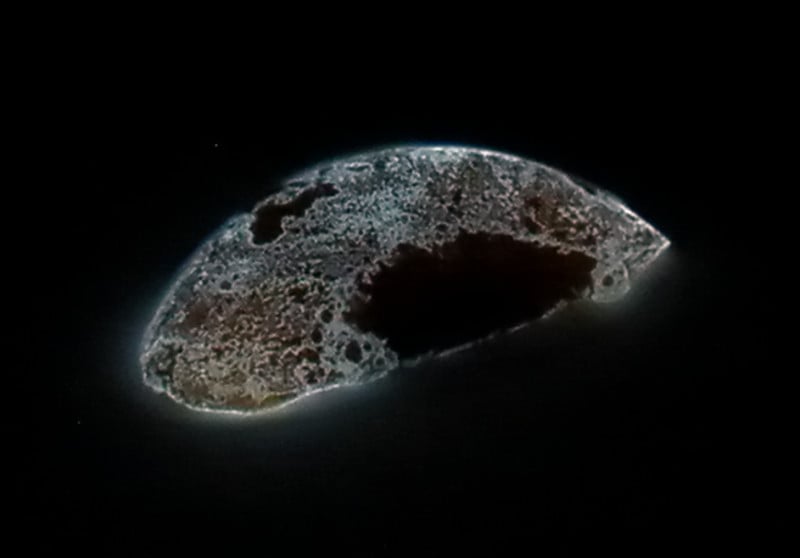 This glow is due to a chemical reaction happening between phosphorus and oxygen. When exposed to moist air, white phosphorus undergoes slow oxidation and reacts with the oxygen molecules to release intermediates like P2O2 and HPO. These molecules are responsible for the faint blue-green glow of phosphorus.

When energy is released in the form of light during a chemical reaction, the phenomenon is called chemiluminescence.

Why does Phosphorus Burst into Bright Flames?

When Brandt heated his urine concoction, he observed a dazzling bright glow instead of the faint light, but why?

As mentioned earlier, the faint glow of phosphorous happens in the presence of water vapor, i.e., it requires a moist atmosphere at room temperature.

But during Brandt’s experiment, he heated the mixture strongly for over 16 hours, which removed most of the water vapor.

The combustion of phosphorus releases a good amount of heat and light, resulting in the formation of phosphorus pentoxide, which is observed as a thick cloud of white smoke over the container. This gas is corrosive and irritating.

In short, white phosphorus is an extremely reactive element that reacts spontaneously with air at room temperature. As the temperature increases, the reaction becomes more vigorous and transforms from a light fume to a blazing flare.

Water inhibits the combustion of phosphorus, which is why we store phosphorus in water.

What Happened After Brandt’s Discovery?

Comprehending that he had uncovered something magnificent, Brandt kept his discovery a secret until 1675. Soon, the news of his discovery spread, and many alchemists and scientists like Daniel Kraft, Johann Kunckel, and Robert Boyle put their own twists on Brandt’s recipe and started producing phosphorus.

Finally, a century after Brandt’s discovery, Antoine Lavoisier, The Father of Modern Chemistry, accepted phosphorus as an element.

Soon, it was discovered that bones and teeth were a better source of phosphorus than urine. Thus, the commercial production of phosphorus began by using animal bones, which finally led to the manufacture of phosphorus matches.

Increased commercial use and the mass manufacturing of phosphorus gave it an important role during the Industrial Revolution.

Upon long-term usage, the toxicity of phosphorus came to light when people working with phosphorus began developing a jaw deformity called “phossy jaw”. This was later found to be caused by the long-term inhalation of phosphorus vapors, which led to the leaching of phosphorus into the bones. This caused swelling of the jaw and loosening teeth. 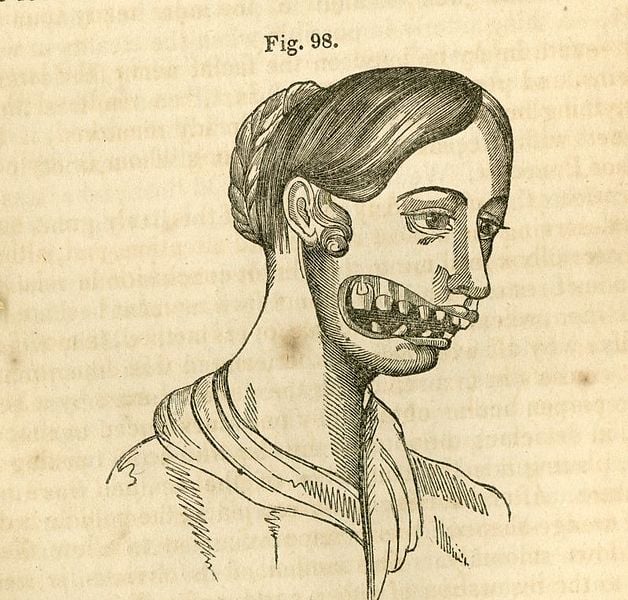 The discovery of the toxicity and danger caused by phosphorus led to the flourishing of two other markets—Weaponry and War. Phosphorus bombs and chemicals were a major part of World War I and II. Thus, phosphorus got the nickname “The Devil’s Element”.

Phosphorus is an indispensable element that is necessary for sustaining life. From our DNA to the water and soil on Earth, phosphorus is present everywhere. Plants also need phosphorus for good growth and high yield. This is why phosphorus is one of the major components of fertilizers. ‘The Green Revolution’, which was primarily driven by fertilizers, was only possible thanks to phosphorus. Hence, it is safe to say that phosphorus has been a pivotal element in countless momentous events around the world.

We can all agree that through his accidental discovery of phosphorus, Henning Brandt achieved something monumental, and far more significant than his original quest. Just as Bob Ross famously reminds us, “We Don’t Make Mistakes, Just Happy Little Accidents.”