At the end of their life cycle, stars collapse due to the imbalance of forces and explode, which aids the nuclear fusion that forms gold-like heavy elements.

If stars truly loved gold, then they would be star-crossed lovers! This is the most fitting explanation to the question of whether stars can fuse to form gold.

Actually, it gets even better… a star only makes gold and other heavy metals as it is dying. So, in quite a dramatic way, humans are fascinated with the ashes of some ancient star! Stars are born, just like humans, and also eventually die. The tiny difference is that a star’s life can actually be billions or trillions of years in length, and they can form rather important elements when they die—or even become black holes!

Stars Are Born, And Then They Die…

We know that stars are formed from stray gas and dust accumulations in space. Essentially, due to a momentary disturbance in a cloud of dust, the distribution of gases is compromised, which leads to gases collapsing due to their own gravitational force. This gives birth to a ‘protostar’, which has a heated center and a gaseous lump that will eventually become a star. The pressure, temperature and gravitational waves that happen to pass by create a force field that causes these gases (mostly hydrogen and helium) and the dust particles to continue collapsing until a star is formed. The star eventually develops into a main-sequence star, which has a higher mass and fuels itself by nuclear fusion. The gravity pulls the star inwards, while the fusion reactions push outwards. Hence, a star is almost always in precarious balance. 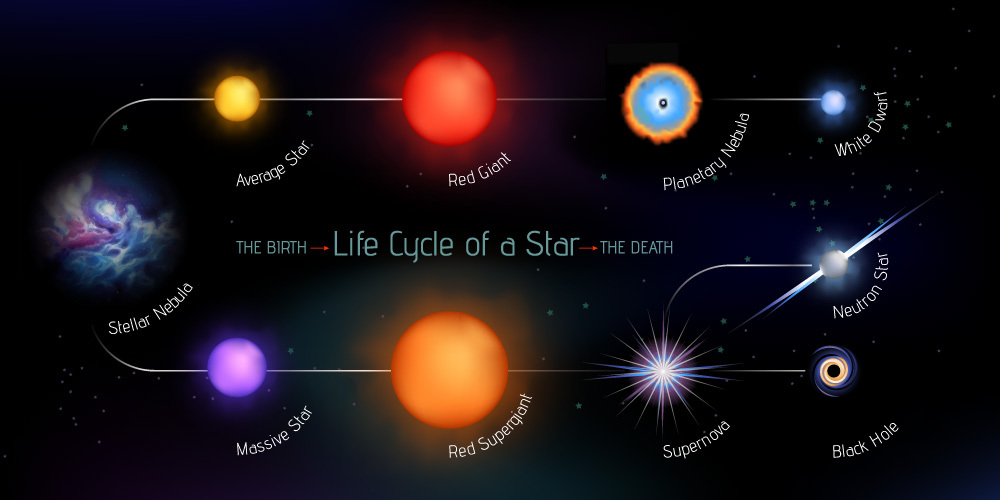 Also Read: How Were The Elements Created?

A star is fueled by the decomposition of hydrogen to form helium. After all the hydrogen is used up, the star utilizes the helium to fuel itself. This process continues until the star reaches a stage where it has formed iron in its core. Each element that has been created forms a layer around the star, giving it the spherical shape that we are accustomed to imagining. The outer layer has the elements that were formed first, but as we near the core, we find heavier elements. Hydrogen gives way to helium, which helps prepare carbon and similarly oxygen, nitrogen, and silicon. All of these elements form a layer around the core, although these layers may sometimes blow out in space due to various cosmic effects like shockwaves or wind waves formed when two stars collide/interact. 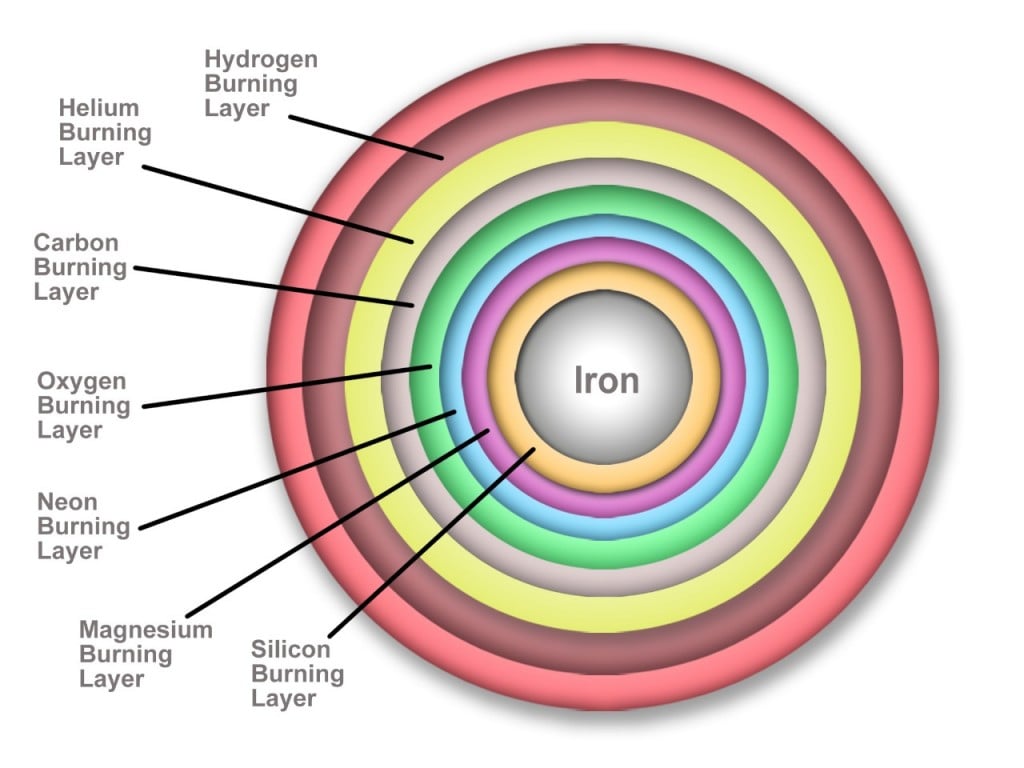 The formation of iron at the core is the harbinger of doom for a star!  After the formation of iron, there is no way a star can continue the process of nuclear fusion. As the end nears, the core compacts until there is simply no more space to cram in. This imbalance of energies causes the layers to compress towards the core.  Big stars are able to handle this kind of strong energy, but sometimes the pressure and temperature rise is so massive that the star bursts with the force of 107 atomic bombs blasting at the same time! These mighty explosions are the source of various elements of the periodic table. The star, during this explosion, bombards the atoms of the elements that have already formed with neutrons. This bombarding exchange does not go well with the released elements. They get supercharged and take up the neutrons, converting them to protons and electrons; this nuclear action gives birth to heavier metals like gold and platinum. This nuclear fusion is accelerated by the presence of the intense heat released by the explosion. Supergiant stars a dozen times the mass of our sun die by these supernova explosions. Recently, two neutron stars collided that were thought to be in a balanced gravitational pull of one another. This collision most likely formed multiple elements, and it has been estimated that an amount of gold equal to the size of Earth may have been formed. This terrific observation further validates the research of hundreds of scientists. Space-time ripples formed by the explosion enabled scientists to observe and note this golden phenomenon.

So, exotically speaking, human beings celebrate the death of a star, since we’re so gold-hungry!

Many people talk about the flow of energy in the universe, but the stars seem to have taken that to the next level! All the gold we have today was likely helium a few billion years ago, and even today, scientists are trying to fabricate newer elements using the same process that takes place in stars (bombardment with neutrons). They’ve successfully formed some radioactive metals with lifetimes of only microseconds, but the day can’t be far off that we begin fabricating gold on this planet, rather than waiting for any more stars to explode!