The metric system is a decimalized system of measurement that was originally established by the French in 1795. The system was designed so that units could be mathematically connected to each other, making conversions and calculations much easier. The system quickly spread throughout Europe and the rest of the world due to the influence of the French Revolution and Napoleon Bonaparte. The United States is one of the only three countries in the world that still does not use the metric system.

The whole world loves the metric system; in fact, all of our lives seem to be filled with it! From calculating exactly how much weight you need to lose after that amazing vacation to measuring the amount of alcohol you need to carry for the next trip, the metric system aids you every step – or in this case, misstep – of the way.

However, the metric system comes so naturally that you probably never stop to think about how it came to be in the first place. I mean, how did the whole world agree on what the length of a meter should be? And how is it that we have all come to accept this standard of measurement?

Furthermore, why a few countries (like US) still refuse to bow down to international peer pressure and accept standardized measurement? 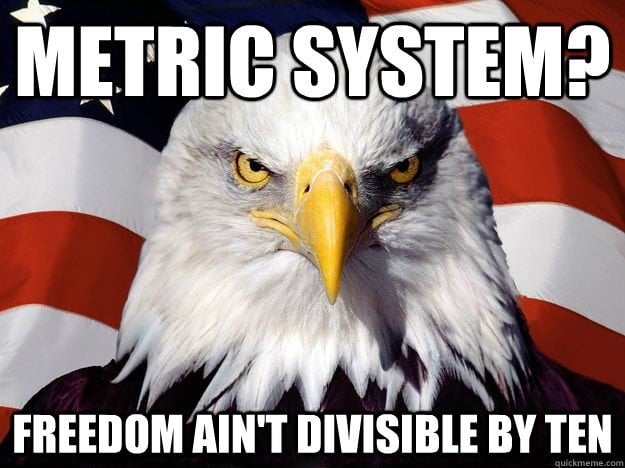 Before the metric system, the world was a very fragmented place, at least mathematically. Units for measurement, calendars, etc. were different everywhere in the world! Even the number systems were quite different in the ancient world. However, after the failed desperate attempt to continue using Roman numerals, the world finally adopted the Hindu-Arabic decimal system in the medieval age.

Even so, the problem of measuring anything in this newly standardized number system was still hotly debated. People around the world use basic units to give value to everything they observe. To do that, their basic units need to be something that they can visualize, such as the length of a foot or the weight of a piece of metal. Unfortunately, this differed from culture to culture. Obviously, you can’t expect all cultures to have the same average foot size, right?

Also, here’s a little fun fact for you. It was due to these fluctuating measurement units that the myth of Napoleon Bonaparte’s diminutive height spread across the world. As it happens, Napoleon was not actually short at all! Many history books refer to his height as being 5 feet 2 inches. But he was only measured at 5 feet 2 inches according to the French understanding of feet. The British heard this and began to besmirch his name by calling him short due to their own personal agenda against Napoleon and the French. In reality, by today’s measurements, Napoleon was actually 5 feet 7 inches tall!

Measurement systems are not something that you can simply change overnight. It is something that a generation grows up with and will be hard-pressed to change. No matter what the advantages of standard units, it is an old habit that stubbornly refuses to die. The only way to achieve this would be to literally break a society down to its basics and then build it back up again. Fortunately for France, they had a perfect opportunity – a properly anarchic environment – to give birth to the Metric System. This opportunity, as you might have already guessed by now, was the French Revolution.

The French Revolution marks the beginning of the modern world for various reasons. It gave the world an average understanding of democratic parliaments and taught us the importance of human rights. It propelled industrial growth in Europe. It separated the Church and State. Most importantly, it gave us the one thing that unites most countries of the world today – the metric system.

The revolutionaries thought a standard system would help France. This was because the tax collectors were cheating common people by taking advantage of the arbitrary units of measurement. The fact that different parts of France had different systems of measurement didn’t help their case. The revolutionaries wanted society to be more fair and more rational for everyone.

Therefore, the Academy of Science convened and decided to create a system in which units were mathematically connected to each other, rather than being used purely out of tradition. To do so, they chose one base unit that did not change cross-culturally – the distance of the Earth’s equator to the North Pole. They took this distance and carved a 1/10,000,000th piece out of it. They called this the meter. Lo and behold, the metric system was introduced to the world.

The transition from traditional units to the metric system was quite confusing for the already politically disillusioned French population. For a while, they used both the traditional and the standardized units.

Fortunately, this transition was made easier by the subsequent ruler of France, Napoleon Bonaparte. Yup, his role in this story doesn’t just end with the vile gossip about his vertical inadequacies. He also played a huge role in providing the metric system with a platform to flourish. He gave small town businesses the choice to continue using the old system. But for official use, the businesses were forced to convert to the metric system.

Napoleon also conquered most of Europe and held his power for eight years. Despite his short reign, his influence on Europe was immense. Other European countries started seeing the sense in using a standard system for measurement. Soon they began officially acknowledging the metric system within their own borders.

The French influence didn’t just stop with Europe. As the French began spreading to and occupying other countries, they also started using the metric system. Why wouldn’t they? It made all the conversions and calculations so much easier! Scientific fields were the first to embrace it with open arms. To this day, all academicians, scholars and scientists use the metric system in their own respective fields of research. Being France’s long time rivals, Britain was not as easily impressed. For a long time, the British resisted this system and continued to use units like stones and pounds and feet. However, even they couldn’t argue with the metric system’s usefulness. They did reluctantly give in. It took them centuries to do so, but hey… better late than never!

Imperialism, in the 19th century, had penetrated every corner of the world. Now that the British had been roped into the system, the metric system inevitably “went viral” all over the world. It became so widely accepted, in fact, that today we know the metric system as the ‘International System of Units’. However, there was one corner that the light of the British Empire didn’t touch. That, of course, was the land of the free and the home of the brave, the United States of America.

The 13 former British colonies in the USA had already gained independence from the British by the time the metric system was created. Being geographically distant from other countries, US citizens hardly had any incentive to change the way they functioned based on the metric system. Therefore, they continued to use their traditional units. 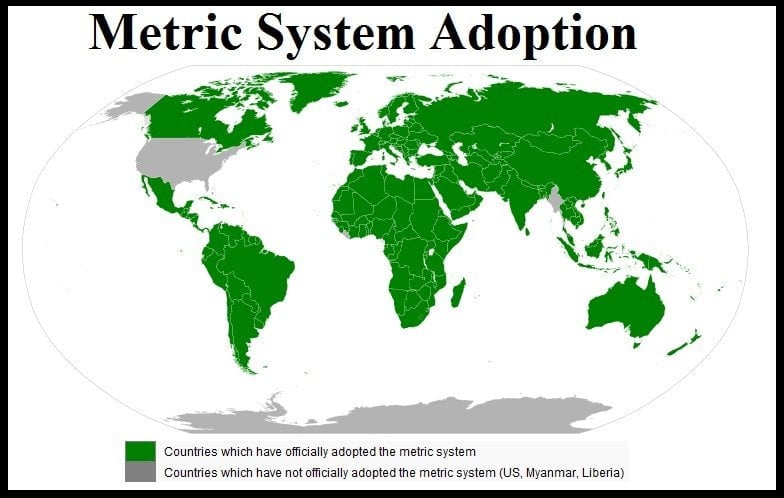 Even to this day, many Americans oppose the metric system, seeing it as a symbol of global conformity. The USA is now one of only three countries in the world that don’t use the metric system, the other two being Myanmar and Liberia. Seriously, America, are you really going to continue avoiding using ‘meters’ instead of ‘feet’ to measure distance?