Heavy water or deuterium oxide is a liquid with similar chemical properties to regular water but has different uses due to its greater mass and density.

Everyone has heard of water or H2O, but far less people are aware of naturally occurring heavy water—D2O.

What is heavy water?

In order to decipher the mystery of heavy water, one must first understand the concept of isotopes. When atoms of an element differ by the number of neutrons in their nucleus, they are known as isotopes. Hydrogen has the following isotopes. 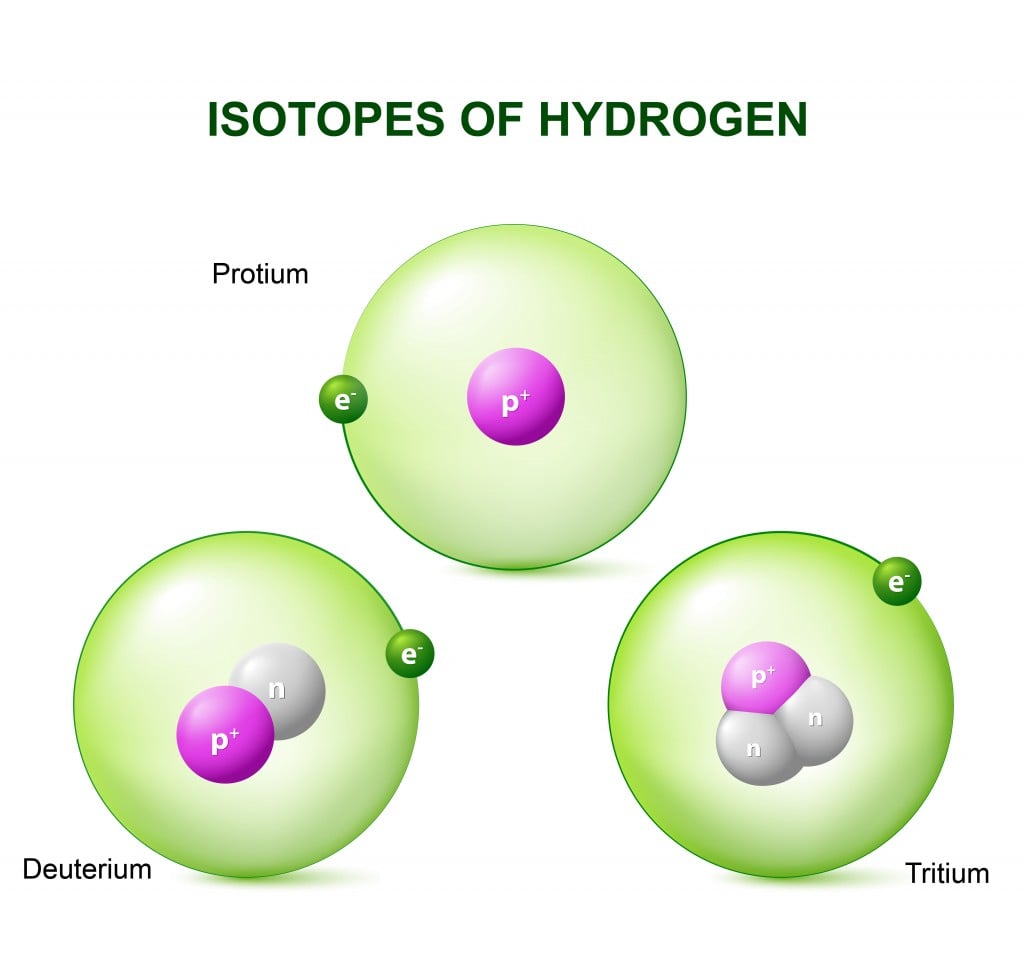 Deuterium is an isotope of hydrogen that contains one neutron more than a standard hydrogen atom. Due to this additional neutron in each deuterium atom, it essentially weighs twice that of a normal hydrogen atom.

Similar to the chemical structure of water (H2O), heavy water or deuterium oxide (D2O) also has two atoms attached to one atom of water. Instead of normal protium atoms, heavy water consists of two deuterium atoms. 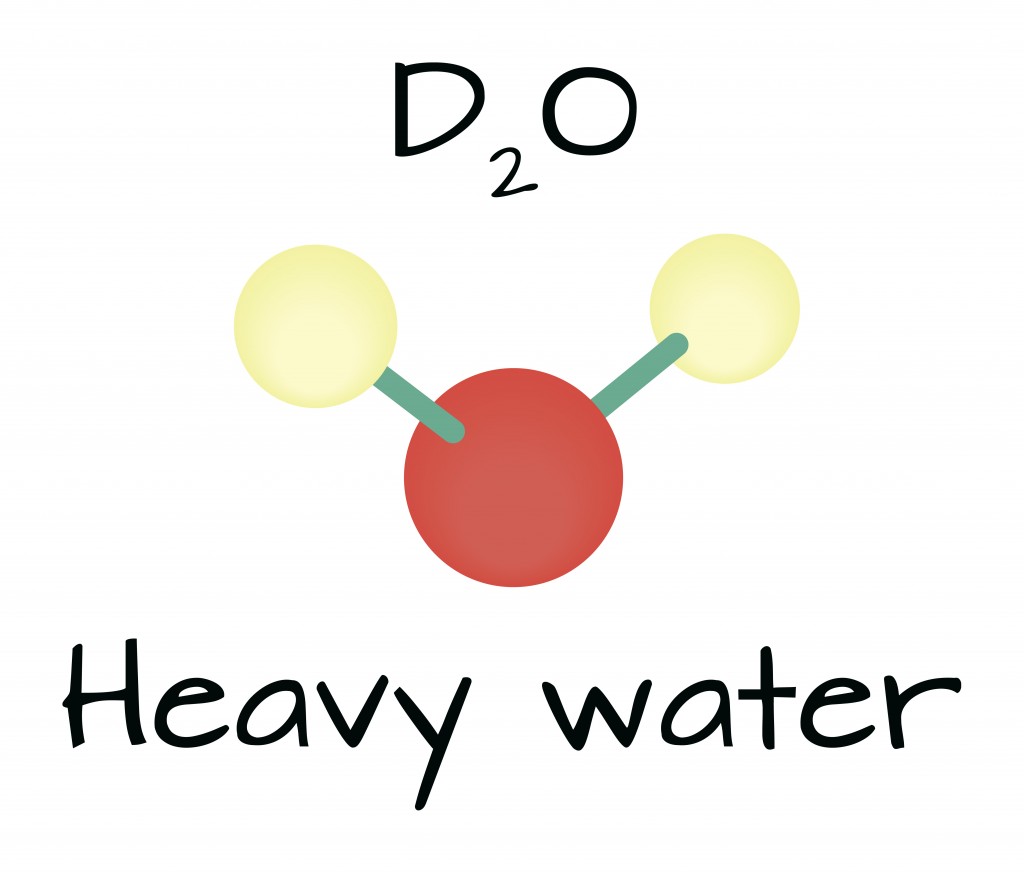 Like normal water, heavy water is an odorless liquid at room temperature. Moreover, deuterium, tantamount to protium, is also a stable isotope. This ensures that heavy water is not radioactive. The molecular weight of each deuterium atom is 20, whereas an H2O atom weighs has a molecular weight of just 18. Due to its higher weight, deuterium is more dense than water. In a solid state, a block of D2O will sink in water, rather than float. 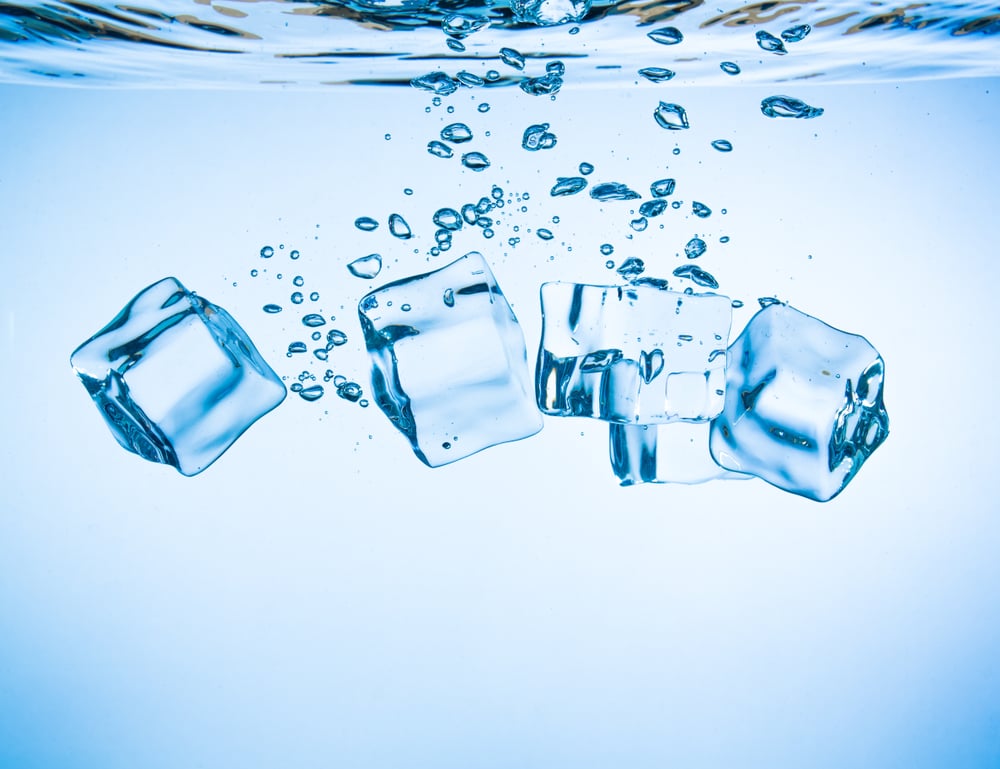 This is different to the how a block of ice (H2O) would behave. An easy way to differentiate between D2O and H2O is the weight and density of the two compounds. Heavy water does occur naturally, but is not anywhere close to as common as water. The ratio of naturally occurring heavy water to regular water is somewhere around 1:20,000,000 molecules. (url – https://energyeducation.ca/encyclopedia/Heavy_water)

What is heavy water used for?

Heavy water can be used in the preparation of certain compounds, such as deuterium and tritium. Heavy water is also utilized in nuclear reactors. A fission reaction with Uranium-235 must occur in these reactors. A fission reaction is when a neutron is fired at a large nuclei, which subsequently splits apart. A large amount of energy is released as a result of this splitting. 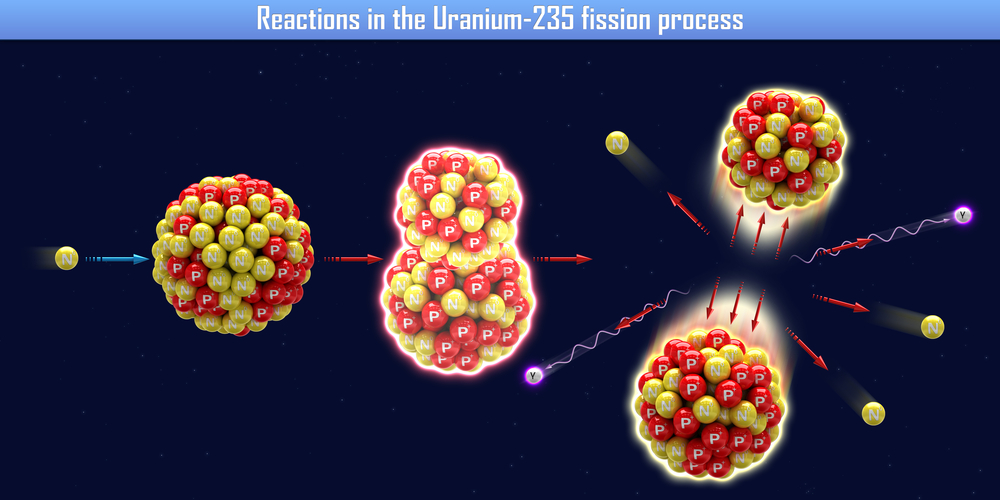 In these reactors, neutrons move at an incredibly fast pace and must be slowed down. Slower neutron movement in the reactor ensures that the fission reaction materializes efficiently. Heavy water acts as a neutron moderator in this reaction, as it is able to slow down the neutron. This allows the fission chain reaction to work with Uranium-235.

Heavy water can also be used as a tracer compound. An isotopic tracer is any atom that can identified when added to another mixture. Such an atom allows scientists to ‘trace’ the progress of a mixture. An isotopic tracer must be compatible with a mixture, but it can also be differentiated in the mixture; heavy water provides this unique combination.

Can you drink heavy water?

In small quantities, drinking heavy water won’t affect you in any way. Consuming D2O won’t harm you because deuterium isn’t radioactive, so you don’t need to worry about radiation poisoning. Deuterium atoms occur naturally in small proportions. There is one deuterium atom for every seven thousand hydrogen atoms, making it quite a rare occurrence. In these proportions, consuming D2O won’t cause any bodily harm to humans. In terms of taste, heavy water has a somewhat sweeter taste than regular water. 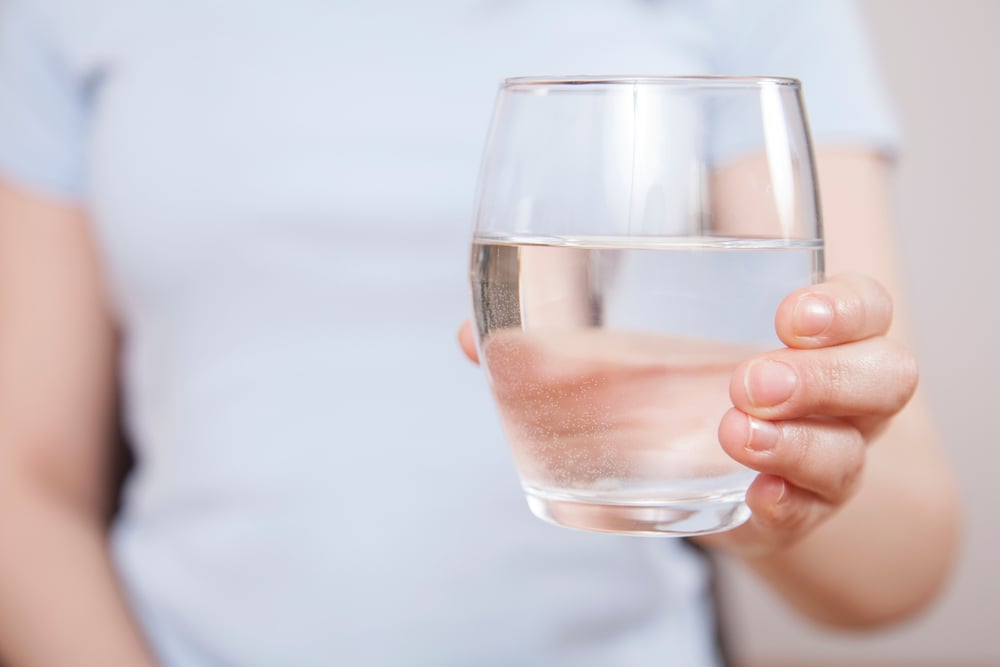 If you consume a significant amount of heavy water, you may feel some uneasiness due to the change in the density of the liquid. You might feel a slight change in the pressure in the fluids present in your ears. However, this amount should still not cause any major damage to your body, and it’s rare that one would be able to consume enough heavy water to cause any major distress. However, if one does consume heavy water in large proportions, it will be very injurious to your health. 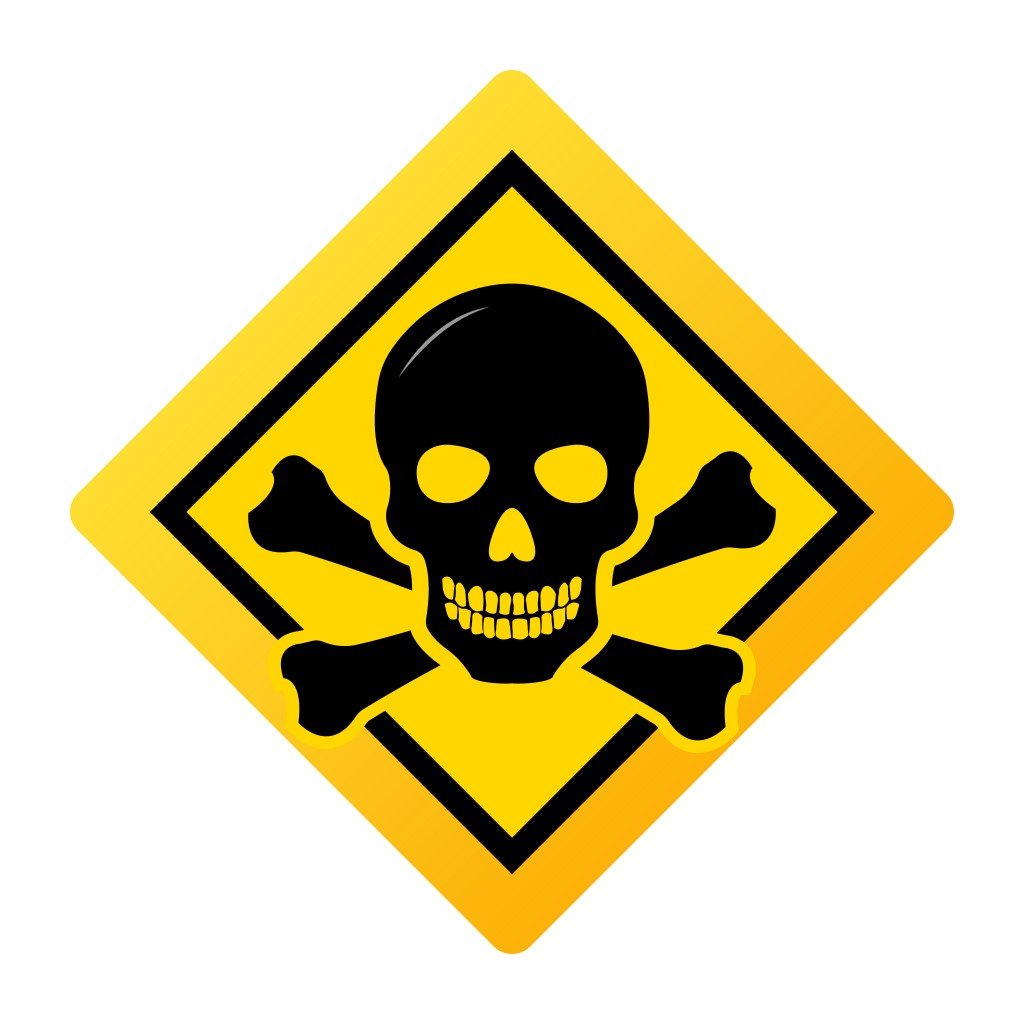 The greater mass of the deuterium atoms, as compared to the hydrogen atoms, will affect chemical reactions that occur in the body. The heavier D2O molecules will slow down naturally occurring chemical reactions that regularly happen in the human body. If the amount of heavy water reaches a point of 20% of the total water present in your body, it could prove fatal. Certain types of heavy water include tritium atoms, instead of deuterium atoms. This variety is even more harmful, since tritium is heavier and, more importantly, radioactive. Any intake of such liquids will cause bodily harm and can affect the DNA integrity of humans.

Thankfully, we rarely hear of people overdosing on any type of heavy water, mainly because obtaining D2O is very difficult and expensive. By using electrolysis, one can obtain pure heavy water, but most people don’t have access to these resources. Purchasing D2O is also very expensive, with prices upwards of $100 for 100 grams of the liquid. (fact – https://shop.isotope.com/productdetails.aspx?itemno=DLM-4-PK)