Our understanding of quantum phenomena is woefully impeded by our classical conception of the world. Unlike the objects we encounter in everyday life, quantum entities are driven by whimsy; they manifest at multiple places simultaneously and are able to connect over vast distances without directly communicating with each other.

Being a witch or a wizard has its merits. For starters, it exempts one from having to put up with the mundane. Why walk when one can magically fly through walls in the blink of an eye?

However, Potterhead or not, who wouldn’t like to sneak through walls? After all, most of us wouldn’t be able to resist the convenience of never having to wait outside a locked door again.

As it turns out, electrons do this all the time too! Due to its intrinsic wave nature, an electron directed towards a barrier may turn up on the other side of that barrier, having never passed through the barrier itself.

This phenomenon, known as quantum tunneling, is relegated to quantum entities that don’t follow the rules governing the classical world (of books, walls and cars).

Our understanding of quantum phenomena is woefully limited by our classical conception of the world. Unlike the objects we encounter in everyday life, quantum entities are driven by whimsy; they manifest at multiple places simultaneously and are able to connect over vast distances without directly communicating with each other. They behave like particles, yet display wave-like properties too; therefore, it is understandable if quantum physics seems a trifle too bizarre, as it diverges sharply from a “classical” view of reality.

Classical physics presupposes that at any instant, an object has a definite value of position and velocity, regardless of whether these properties are being measured.

However, on the atomic or subatomic scale, an inherent uncertainty pervades, so exact measurement—and therefore, knowledge of both the entity’s position and momentum (product of mass and velocity)—is forbidden. A quantum entity has a range of possible positions and velocities. Until a measurement is made on the object, it exists as a superposition of various momenta; it is everywhere and nowhere in particular. 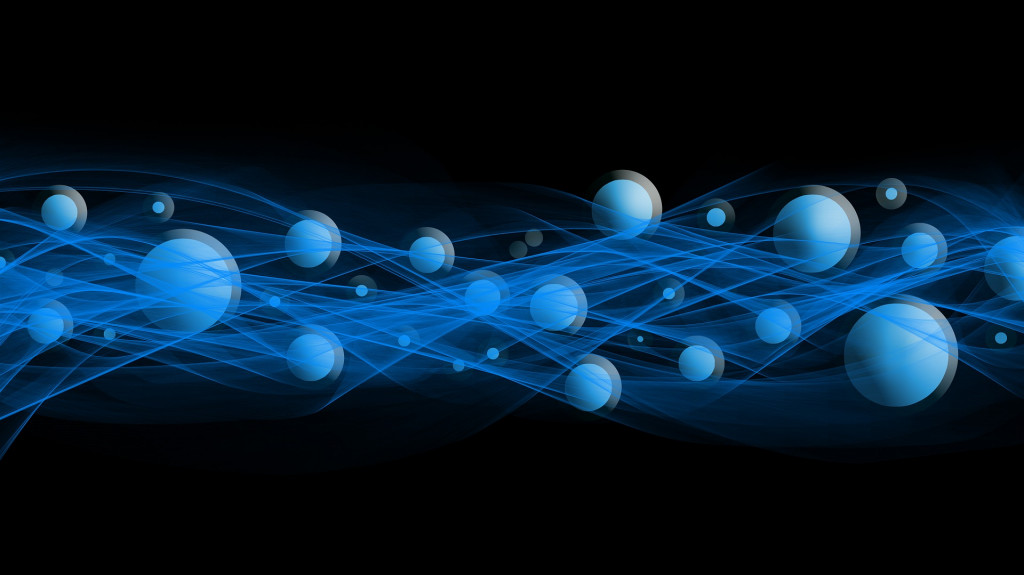 Pygmy puff in a box

Let’s say that Ginny has fashioned a house out of a box for her pet pygmy puff to happily wobble around in. Here, the pet represents a quantum entity and the wave function associated with this pygmy puff tells us about the spots he likes to hang out the most, i.e., it expresses the likelihood of finding the quantum pet at a particular location.

While Ginny is most likely to find the pygmy puff in the middle of the house (i.e., where the waviness is most intense), he may also sometimes be found at the far sides of the house. However, since a quantum entity exists as a wave of probabilities, it’s not possible to have an accurate position for the quantum pet, just as it’s not possible to tell where a wave is on the water. 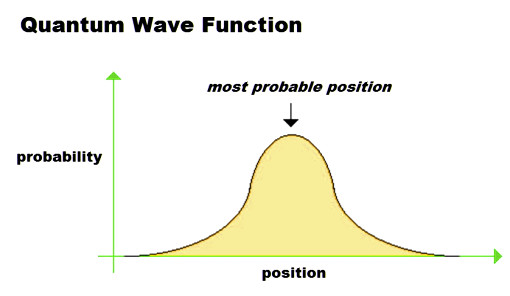 Here’s something even more befuddling: there is a possibility that when Ginny goes back to check on her pet, she will not find him in his house at all. This can happen because even though the wave function describing the pet becomes exponentially decayed upon encountering the walls (barrier) of the box, it does not abruptly vanish.

Instead, it extends beyond the walls, so there remains a probability, albeit small, that the particle may be found beyond the barrier.

There is no burrowing involved here; a quantum entity can be found outside the box simply because it can exist that way – one moment inside and the other outside — without needing to also take up a position at every point in between.

The relation between wavelength and momentum 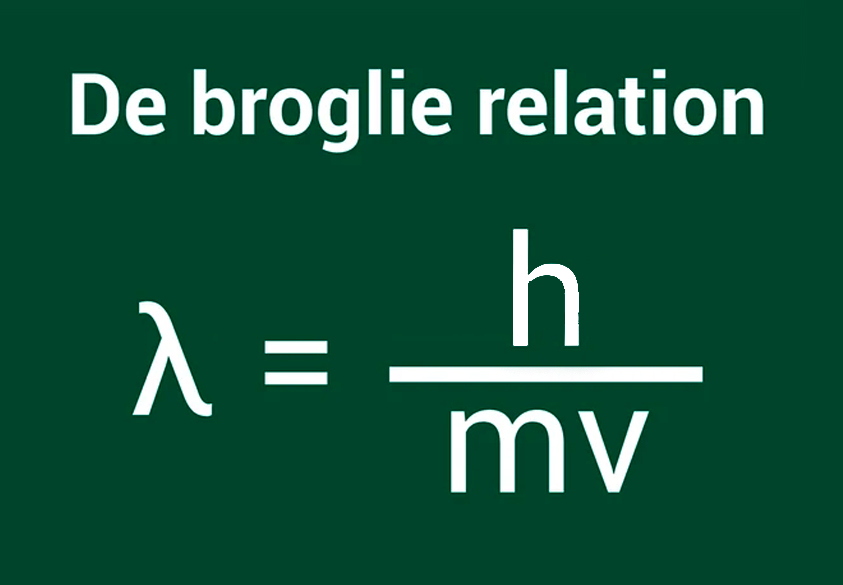 Since wave-particle duality isn’t restricted to light, there exists a wavelength for everything (even humans), but there is a limit imposed on the length of the wave at which an entity’s wave aspect becomes significant.

This means that for wave nature to be evident, an object’s size must be comparable to its wavelength or its wave must interact with other objects about the same size as its own wavelength. For objects significantly larger than their own de Broglie wavelength, wave-like properties are undetectable; however, for quantum particles like electrons, which exist as fuzzy clouds in atoms, their wave nature is what enables them to tunnel.

Can you tunnel through the barrier?

“You hear the occasional train whistle blaring at a distance as you hurriedly make your way through the packed station towards the wall between platforms 9 and 10. Evident only to the trained eye, witches and wizards can be spotted bustling about in muggles’ clothing so as to avoid drawing attention to themselves.” 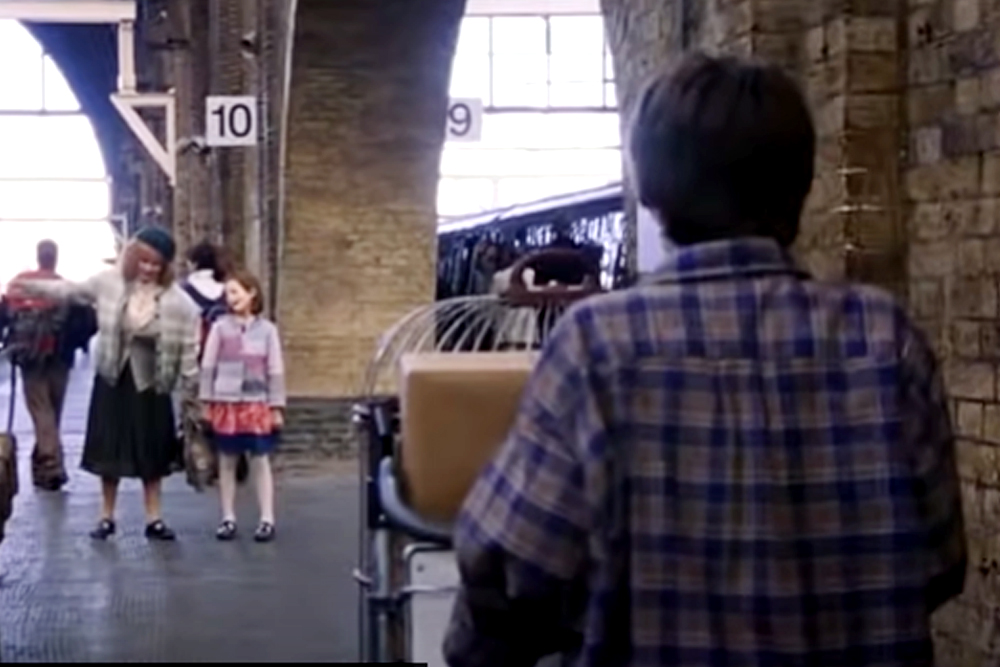 Harry Potter about to go through the wall between platforms 9 and 10 (Photo Credit : Wizarding World/Youtube)

Though you might have imagined this scene countless times, it’s a rather poor substitute for the actual experience. So, you decide to do something very brave and rather stupid. Gathering all your wits about you, you dash towards the brick wall between platforms 9 and 10, determined to make it through to the other side.

Now, having crashed into the wall and convinced the onlookers that you’re fundamentally unsound, you wake up a few moments later, only to discover that you are still on the same side of the wall.

The more massive an object is, the shorter its de Broglie wavelength will be. For everyday objects traveling at normal speeds, this wavelength is so ridiculously small that quantum behavior is not visible. This is why, unlike Harry and the rest of the magical community, ordinary humans wouldn’t be able to tunnel through platform 9 ¾.