There are numerous ways in which information regarding the molecular structure and composition of a chemical compound can be exhibited. These include the commonly used molecular formula, which shows the number of atoms of each element in the compound, as well as the structural formula, which illustrates the arrangement and bonds of the different atoms in a compound.

How To Calculate Empirical Formula?

Step 1: Find The Mass (Amount) Of Each Element In The Compound

We start the procedure by finding the exact amount (in grams) of each element that makes up the compound being studied. Let’s assume that the compound whose empirical formula is to be found is XaYbZc. Chemical analysis of the compound XaYbZc yields information regarding the amount of each element (X, Y and Z) in percentage form. We convert these percentage values into simple numbers by assuming that we have 100g of the sample compound.

We only need to perform this step when the composition of the compound is provided in percentage form. If the amount of each element is already available in grams, this step doesn’t need to be performed.

Step 2: Convert The Amount Of Each Element To Moles

In Step 2, we find the number of moles of each element using the mass values found in the previous step. In case you’ve been living under a rock, moles are a unit of measurement used to measure the quantities of small particles, such as atoms, molecules, electrons, protons, neutrons, etc. One mole of an element means that about 6.022×1023 atoms of the element are present. The formula to find the number of moles of an element from its amount is:

We can find the mole ratios of each element by dividing the individual mole values by the smallest mole value found. Here, the smallest value is 3.33 moles. Thus, we find:

The penultimate step in the procedure is converting the mole ratios to whole numbers, in case they aren’t already. The mole ratios we found in the previous step are 1, 2 and 1, all of which are whole numbers. Thus, we can skip this step and proceed to the final step.

Note: Make sure you multiply all the mole ratios by the integer, and not just the non-whole number mole ratio.

Now that we have all the required data in our hands, it’s time to write the empirical formula for the compound XaYbZc. Write down the symbol of each element in the compound, followed by its mole ratio as a subscript.

For our sample compound, the empirical formula is X1Y2Z1 or simply XY2Z.

The sample compound XaYbZc that we’ve been using as an example was actually glucose. The molecular formula for glucose is C6H12O6, but as we just concluded in the final step of the procedure, its empirical formula is CH2O. 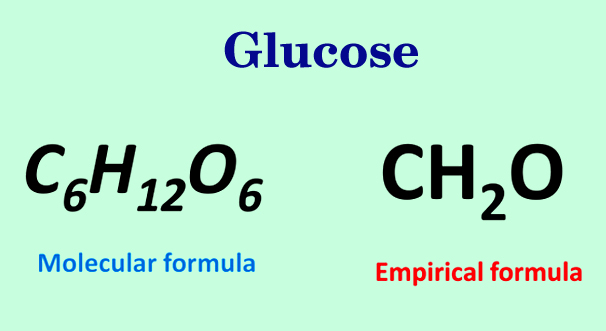