To balance a chemical equation, start by counting the number of atoms of each element on both sides of the arrow. Next, balance the primary elements (leaving hydrogen and oxygen for last) by multiplying them with appropriate numbers, and finally balance hydrogen and oxygen in the same manner.

How would your food taste if the ingredients weren’t added in the correct proportions?

Similar to food, the ingredients of a chemical reaction (reactants) must be present in the correct proportions to form desirable products.

Also, the law of conservation of mass states that mass can neither be created nor destroyed, but can only be rearranged. This is exactly what transpires in a chemical reaction. The reactant atoms get rearranged to produce products and the quantity (the number of atoms) of each element does not change when it undergoes this rearrangement (reaction).

Thus, when writing a chemical equation for a reaction, it is of the utmost importance to ensure that the law is followed and the number of atoms of each element is equal on both sides of the equation. If this is achieved, the reaction is said to be balanced. 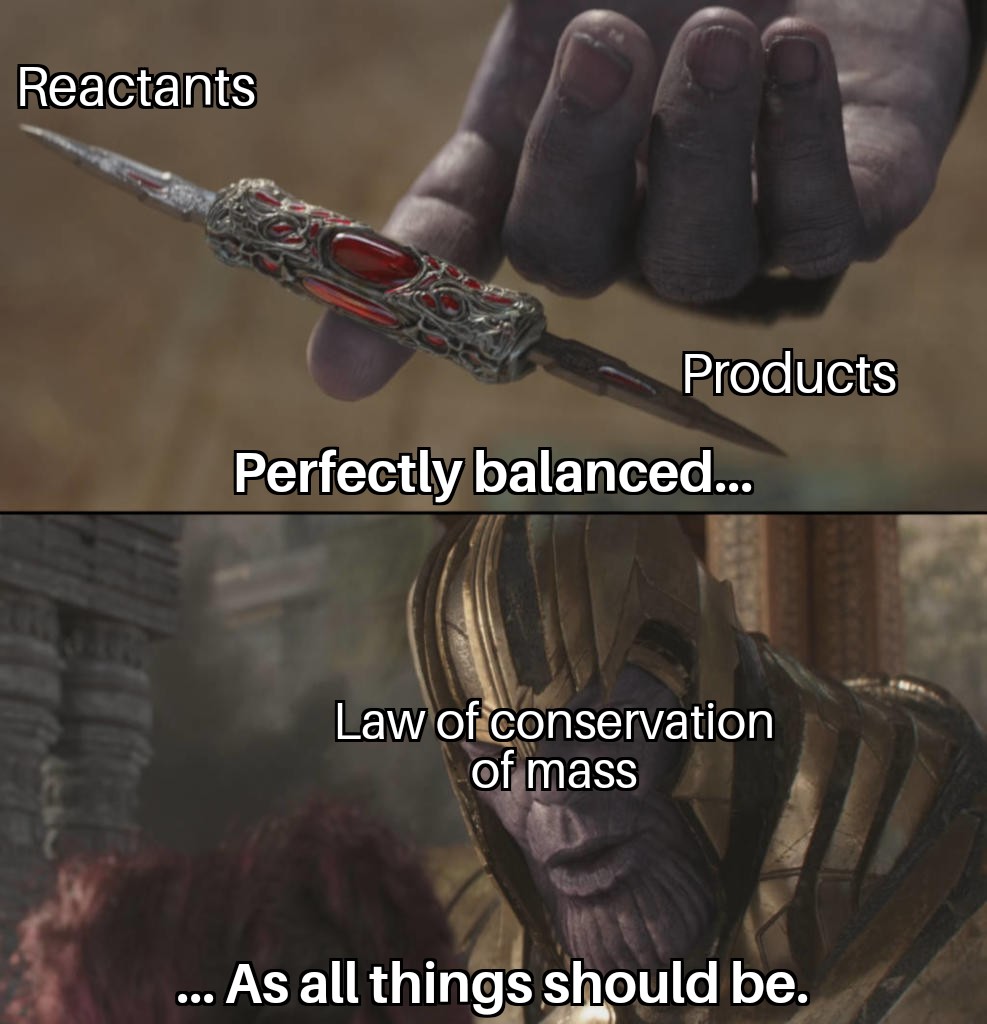 Just like Thanos, the law of conservation of mass demands that every chemical equation be perfectly balanced.

What Are The Different Atomic Models? Dalton, Rutherford, Bohr and Heisenberg Models Explained

What is a chemical equation?

Before we go through the procedure, let’s dissect a chemical equation and get a bit more familiar with its various components. Chemical equations are neatly packed and presented arrangements of chemical symbols and numbers to describe a chemical reaction.

Components of a chemical equation

Furthermore, the physical state of each element is also noted after their chemical symbols/formulas in a subscript format. Talking about subscripts, the numbers written in subscripts after a chemical symbol indicate the number of atoms of the element that are present.

The coefficients affixed before each chemical symbol result from the act of balancing the equation and convey information regarding the number of molecules of each element/compound.

How to balance a chemical equation?

Balancing an equation is far from brain surgery. All it takes is having some talent with numbers and the ability to follow basic steps. The procedure starts with an inspection of the reaction equation. The atoms of each element on either side of the arrow are counted; if they aren’t the same, the following steps are performed to balance them out.

Step 1: Note the number of atoms of each element

As mentioned, start by counting and noting down the number of atoms of each element on both sides of the reaction. Let’s consider the reaction of atmospheric nitrogen with hydrogen. The two react to yield ammonia (NH3) and the reaction is called ‘The Haber-Bosch process’. The unbalanced equation for this reaction is:

Inspection reveals that the equation has 2 atoms of nitrogen combining with 2 atoms of hydrogen to produce a single molecule of ammonia. However, ammonia has 3 hydrogen atoms, while the reactant side has only 2. Also, the reactant side has 1 nitrogen atom more than the product side. Clearly, the equation isn’t balanced and does not obey the law of conservation of mass. Thanos wouldn’t approve of this, so let’s get to balancing the equation before he snaps!

Step 2: Start with the primary element

When balancing a chemical equation, always leave hydrogen and oxygen atoms for last (as they are often present on both sides). Start with an element that appears in only one of the reactants and one of the products.

In our example, the only element other than hydrogen is nitrogen, so let’s balance it out. The reactant side has 2 atoms of nitrogen, while the product side has a single atom. Simply multiplying ammonia by 2 would balance the number of nitrogen atoms. The equation now stands:

Now we have 2 nitrogen atoms on either side, so nitrogen is balanced. Let’s move to hydrogen next.

In the terminal step, we balance the hydrogen and oxygen atoms. As per our table, the number of hydrogen atoms has increased to 6, while the reactant side still has only 2 hydrogen atoms. How can we convert 2 to 6? By multiplying it by 3. So let’s do that!

We now have 6 atoms of hydrogen on both sides. Thus, hydrogen is also balanced. The table now reads:

Let’s perform a final check to ensure that all the elements are balanced. The number of nitrogen atoms on both sides is the same, as is the number of hydrogen atoms. Thus, our chemical equation is perfectly balanced (as all things should be).

Another example of a balanced chemical equation

Let’s consider another chemical reaction and try to balance it out. After all, practice makes perfect. How about the photosynthesis reaction? In the reaction, carbon dioxide and water react with each other to produce glucose (C6H12O6) and the oh-so-necessary oxygen. The unbalanced equation is:

Leaving hydrogen and oxygen for later, let’s balance the number of carbon atoms on both sides. The reactant side has only 1 carbon atom, while the product glucose has 6 carbons. Multiplying CO2  by 6 should balance the carbon atoms for us. Thus:

Now, let’s move to hydrogen. According to the table, we have 2 atoms of hydrogen on the reactant side and 12 of them on the other side of the arrow. Multiplying H2O by 6 will balance hydrogen for us.

The only element left to be balanced is oxygen. The reactant side has 18 of them, while the product side has only 8. If we multiply glucose by any number, the rest of the elements will become unbalanced, so let’s focus on the solo molecule of oxygen instead

Multiplying it by 6 results in a total of 12 atoms; when these are added to the already existing 6 atoms of oxygen in glucose, the equation balances out.

As per the table, all the elements are now present in equal quantities on opposite sides of the arrow. Thus, our equation is balanced.

Apart from the method (inspection method) we just learned, two other methods exist to balance a chemical equation. The first requires knowledge of algebraic equations and how to solve them, while the other takes an even more complicated route by making use of matrices. However, the method of inspection is the easiest of the three and can be applied to balance all kinds of equations.

A few notes to remember when performing this method include: Do not balance the equation by changing the subscript numbers, leave hydrogen and oxygen atoms for last, start with the element that appears in only one reactant and one product, and balance single/solo molecules at the end.

Balancing a chemical equation is the first step in the computation of many chemical properties. This list includes finding the limiting reactant in a reaction and calculating product yield, among many others!