Yes, the wind does influence the speed of sound through it. A sound wave travels faster in the direction of the wind and slower against it. Apart from a speed bump or boost, wind also alters the path of sound waves by refraction.

“I want the lockdown to end now!” yelled young Tim from his window.

“Stop shouting into the wind!” replied his mum.

Confused by his mum’s reply, Tim thought “Shouting into the wind? Why does it matter? I just want the lockdown to end!” 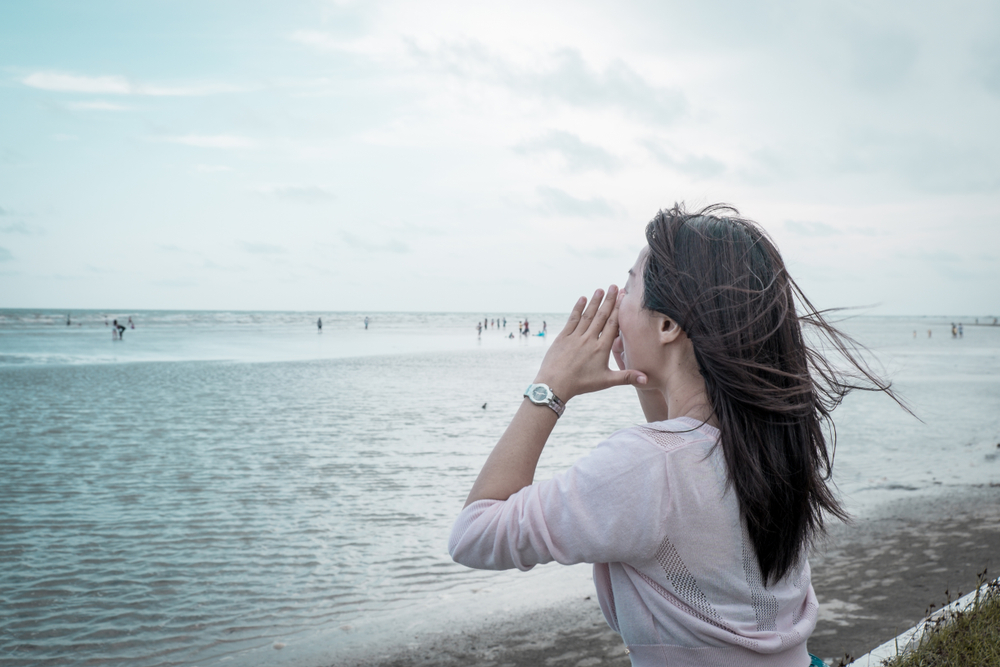 A drum produces sound when its skin is struck, guitars when their strings are plucked, and the larynx (the voice box in humans) when it vibrates because of air flowing through it. Sound in its simplest form can therefore be described as a pressure wave caused by the vibration of objects.

Since sound waves are created due to the vibration of matter, they are classified as mechanical waves and require a medium to propagate, unlike electromagnetic waves (light). This propagation occurs by the collision of vibrating particles in the direction of transmission. This is also why sound can travel through gases, liquid, and solids, but not a vacuum, as it lacks any matter. 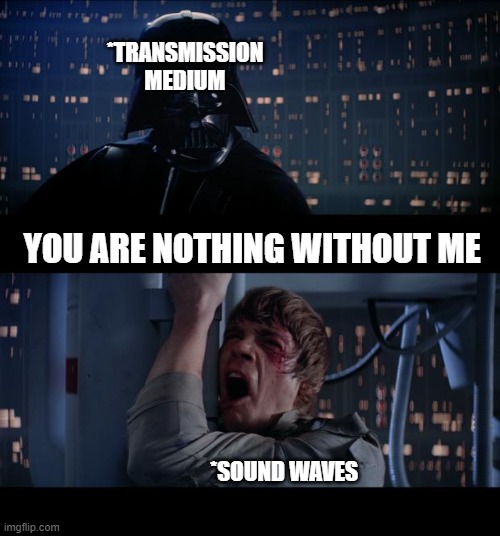 Influence Of Wind On Sound Waves

While the days of using string phones are far behind us, we often yell to communicate with someone far away from us (for example, someone down the mountain or on the other side of the lake). Here, as in most cases, the surrounding air plays the role of a medium. The wind (the bulk motion of air in a given direction) carries your sound and dictates how fast & clearly it will be transmitted to the receiver.

Wind and sound share a relation analogous to a swimmer and the water’s current. A swimmer will certainly be able to swim faster in the direction of the stream, rather than against it. Similarly, the speed of sound gets compounded by a factor equal to the speed of the wind when both are moving in the same direction, and subtracted when they are not.

Also Read: Why Does Closing A Door Help In Blocking Out Noise?

Apart from providing a slight speed bump/boost, the wind has many more interesting ramifications on sound and its transmission, one of which is the refraction of sound.

Refraction is the process of change in direction and, as a result, the speed and wavelength of a wave when it passes over from one medium to another. The phenomenon is most noticeable in light waves and is rarely seen in sound waves, as they tend to travel through a single medium (air). Nevertheless, sound waves get refracted when wavefronts travel in a medium with varying properties.

Coming back to the wind, generally, the speed of wind flow is low near the Earth’s surface, due to the presence of blockages (trees, buildings, mountains, etc.) and the speed increases as we move higher off the surface. This difference in wind speeds in the higher and lower levels results in a speed gradient. The gradient, in turn, influences the speed of sound at the respective levels. 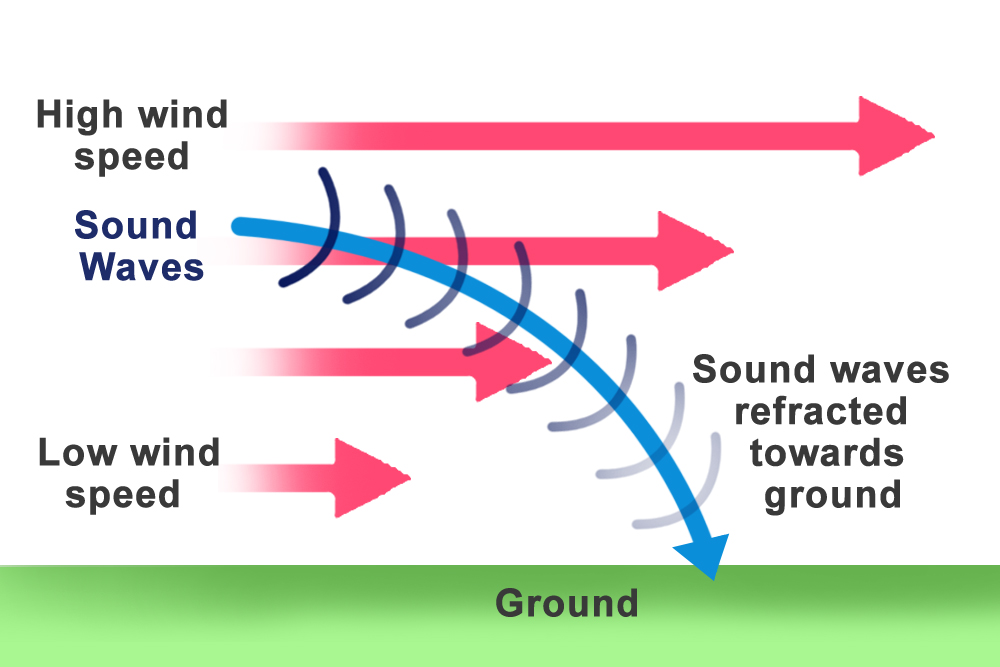 Sound waves traveling in the same direction as wind are refracted towards the surface.

When a sound wave is traveling in the direction of the wind, the top half of the wavefront moves faster than the lower half due to the difference in wind speeds. Over long distances, the difference in the position of the top and bottom of the wavefronts increases exponentially. Eventually, the sound wave is forced to change its direction and gets refracted downwards towards the ground.

On the other hand, when a sound wave is traveling against the wind, the speed of sound will be reduced. The speed of the top half of the wavefront is reduced much more than the lower half. Over time, the top half lags significantly behind the bottom half and ultimately, the sound waves get refracted upwards, away from the ground.

The bending/refraction of sound waves due to a difference in wind speeds often leads to the formation of shadow zones that remain devoid of any sound! 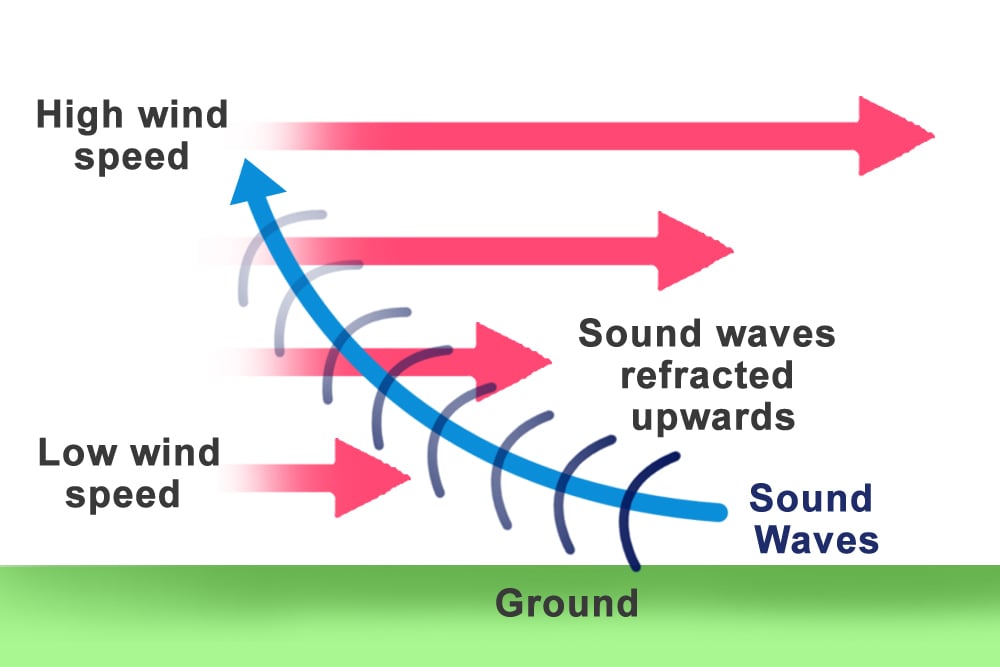 Sound waves traveling against the direction of wind get refracted away from the surface.

Thus, the difference in wind speeds results in the refraction of sound, which makes it easier to hear sounds emanating from a source downwind, and more difficult when the source is upwind.

Apart from a windspeed gradient, factors like temperature and density can also lead to the refraction of sound waves. Refractions due to a difference in temperatures of air sections are quite common near a water body (lake or pond) and are often experienced by fishermen. Since water has a cooling effect on the air molecules, the air tends to be slightly cooler near the water surface, as compared to the air far away from the surface (thermal inversion). This difference in temperatures is most noticeable during the morning period when the sun hasn’t reached a prime position to generate heat. Sound travels faster in warmer air, so sound waves get refracted towards the surface and travel a greater distance than usual.

Also Read: Where Does Wind Come From?

This extended reach/amplification of sound waves is one of the few known examples of sound refraction “in the wild”.

Nevertheless, now that you know how sound and wind interact, be sure to use it to your advantage if you ever need to call for help!