The difference in the sound of the siren (or the horn of a car or a train) is due to a phenomenon called the Doppler Effect.

Imagine driving home along a road that has a surprisingly small amount of traffic. Suddenly, you hear the distant wail of a siren. Before you even turn your head to see, your mind has already registered that an ambulance is approaching your position from behind. The siren sounds louder and more shrill as the ambulance approaches your car, but then changes its pitch as soon as the ambulance overtakes you, almost like an opera singer can change the shrillness of her voice. You can’t help but notice the unique, shifting sound of the siren.

Siren designers must be pretty clever to come up with a siren that changes its pitch automatically!

If this thought has ever crossed your mind, then you may be in for a surprise! In truth, cutting-edge sirens aren’t making you hear different pitches of the siren as it moves; instead, its an extremely simple physical phenomenon.

First, listen to the changing pitch of the siren from a fire engine (fire truck) in the video below:

Notice how the sound of the siren changes as the truck passes by the camera? That’s the strange occurrence that we want to talk about.

This difference in the sound of the siren (or the horn of a car or a train) is due to a scientific phenomenon called the Doppler Effect. Like many other phenomena, the Doppler effect is named after a scientist, Christian Doppler, who is credited with its discovery. Our world is replete with events and daily-life experiences that are associated with Doppler effect. Let’s see a bit more about what the Doppler effect actually is. 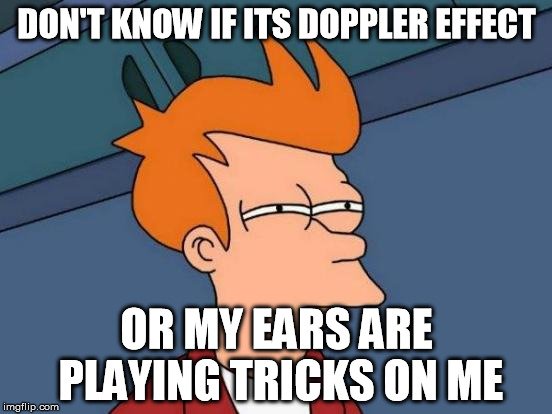 The Doppler effect is observed when the source of a particular set of waves is moving with respect to the observer. Suppose you are standing on the sidewalk, waiting to cross the street. On the far left side of your position, you see an ambulance racing in your direction. In this case, the siren on the ambulance is the source of the waves (sound waves, in this case) and you are the observer.

As the ambulance approaches you, the distance between the source of the waves and the observer decreases. Consequently, the siren sounds more shrill as the pitch of the wailing siren ‘sounds’ higher than its original value, as sound waves reach you ‘more frequently’. It should be noted that there is absolutely no difference between the frequency of the original sound waves and the sound waves approaching you; you simply perceive the sound to be higher pitched as the sound waves reach you at a more frequent rate, because the distance between you and the ambulance is closing.

This is very similar to the case we discussed above, but in reverse. As the ambulance moves away from you, the distance between you (the observer) and the siren (source of the sound) increases. Therefore, the sound waves get to spread out in a bigger area, thus making you feel as if the siren sounds low-pitched, or just different!

Other Cases Of The Doppler Effect

The example of the ambulance siren is just one of the many instances where the Doppler effect comes into play. The same case applies to a police vehicle as it passes you by, and those loud train horns you hear approaching on the tracks. These common phenomena seem to fascinate many people, especially literary minds, who make comparisons like ‘the blaring sound of a truck horn’ or ‘the shrillness of the horn of an approaching train’. Do these people realize that they are inadvertently entering the realm of physics when they describe these unique sounds?

Also Read: Why Do Voices Sound Squeaky When They’re Sped Up?

The Doppler effect is not just observed with horns and sirens, but also in some extremely boring events of daily life. For example, have you noticed that the sound of the tap water filling a bucket changes as the level of water rises in the bucket? That’s a simply DIY demonstration of the Doppler effect right there!

How much do you know about the sound of sirens?