Shock waves occur when something moves faster than the speed of sound, causing sudden variations in fluid properties.

When you hear the word shockwave, several images come to mind. The effect of a bomb going off is perhaps the most prominent one. We often say that big events, like an election, caused “shock waves” throughout the country, but those are only figurative shock waves. You might even be thinking about the obscure Marvel superhero of the same name, but now we’re getting off topic…

Let’s explore what shock waves mean in physics and how exactly they’re created.

What Is A Shock Wave?

A shock wave, like any wave, is a disturbance moving through a medium. They are thin wavefronts that cause sudden changes in the pressure, temperature, and density of the medium.

To visualize shock waves, we need special imaging techniques like Schlieren imaging to capture them. 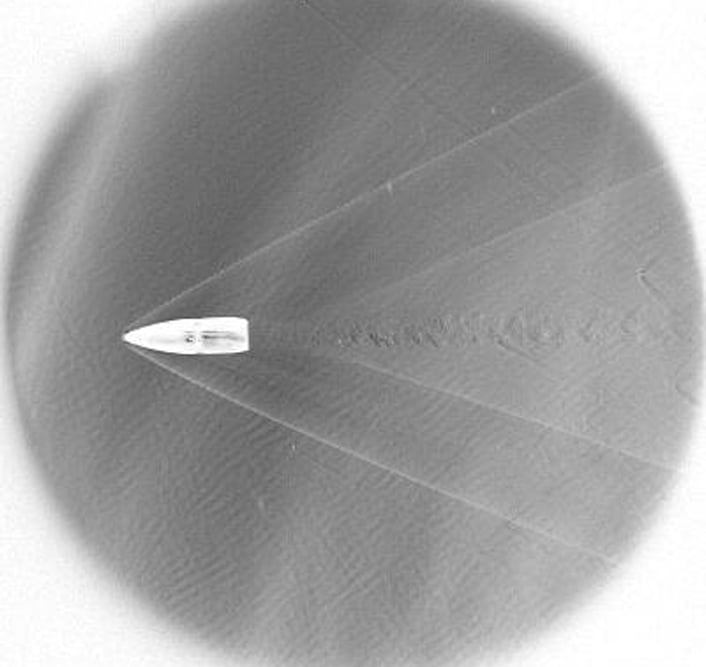 How Are Shock Waves Formed? Consider a boat moving through water. The boat is moving at a speed faster than the speed of waves in the water, so the waves have to move out of the way. This results in the wake that we see. When an object moves through a medium at a low speed, the mach number is less than one. In this case, the waves in the medium moving outward from it will be symmetrical or almost symmetrical in all directions.

At the speed of sound, the mach number is equal to one, at which point waves will be tightening and overlapping at the front of the object.

So what happens once the moving object exceeds the speed of sound? The waves are unable to adjust or catch up and are left behind, so to speak. The trailing waves create the shape of an expanding cone.

Shock Waves Around Us

What creates shockwaves? Supersonic aircrafts are an obvious answer, as they often travel at speeds above mach one. In the image below, you can see a supersonic aircraft breaking the sound barrier. The vapor cone is caused by the drop in temperature and pressure caused by the shock waves. When the shock waves get to us, we hear the sonic boom that we associate with jets passing by. The illustration below shows how the waves behave in subsonic, mach one, and supersonic conditions. 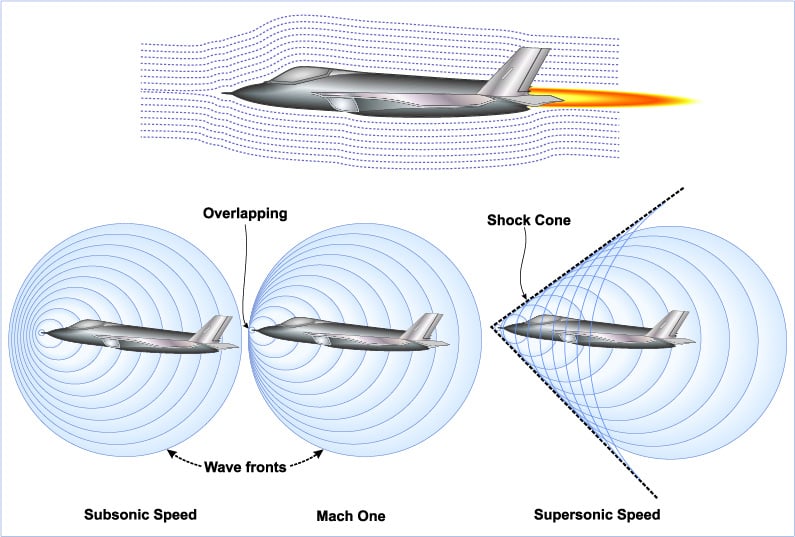 Bullets traveling at supersonic speeds generate shock waves. This is what causes the ‘crack’ of the bullet that can be heard as it passes by someone. In the awesome video below, you can see such waves being captured with schlieren imaging and then analyzed.

The sound heard when cracking a whip is the result of weak shock waves being produced by the fast-moving tip. Yes, that’s right. The tip of a whip travels faster than the speed of sound to create that crack! Also Read: Cherenkov Radiation: Is There A Sonic Boom Equivalent For Light?

The sound of thunder is also a shock wave phenomenon. The bursting of firecrackers is the result of shock waves. Bomb explosions create similar, but bigger spherical shock waves, which can knock over buildings if the explosion is strong enough. A meteorite impact would also cause such waves.

Beyond Aircrafts And Bombs