Wind is caused by the movement of air due to differences in pressure and temperature on our planet; the greater the difference, the stronger the winds will blow!

There are few things more invigorating than a stiff breeze on a chilly autumn morning, or a gentle wind blowing across the sand on a hot beach. Wind is something we experience almost every day, and it is so ubiquitous that it’s easy to ignore… until it summons a thunderstorm, a tornado, or a monsoon! From our individual perspectives, wind is a localized phenomenon, but in reality, it is a byproduct from huge global cycles of pressure, temperature and moisture. Next time you step outside to feel the wind on your face, wouldn’t it be more enjoyable to know where that wind came from—and why?

At the most basic level, wind is born because of differences in Earth’s temperature, which are caused by the uneven heating of our planet by the sun. Anther crucial factor behind wind is the air itself, the atmosphere around us, which is composed of nitrogen, oxygen and water vapor, along with various other trace molecules that can be ignored for this particular subject.  Simply put, wind is caused by the motion of this air from areas of high pressure to areas of low pressure. Air pressure is defined as the amount of force that the air exerts on a specific area. When a large mass of air is warmed by the heat of the sun, it will begin to expand, become lighter, rise and disperse, thus exerting less pressure on the area, specifically, the surface of our planet. If the air that rises happens to be full of water vapor, then its movement can also create clouds, storms and adverse weather conditions. Conversely, there are also high-pressure areas surrounding these warmer bubbles; when these low-pressure conditions are created and the air rises, the high-pressure air (cooler and drier) will rush in to fill the empty space above the ground. This movement of air is the atmosphere’s attempt to balance itself and find stability, but in the process, wind is created.

On a much larger scale, a similar thing is witnessed in the tropics, where hot air is continually being pushed upwards, where it spreads to the north and south, while high-pressure air from the north and south are summarily pulled into these tropical areas, where it will start to warm up.

How Does Wind Move?

The explanation above may suggest that wind tends to move in straight lines, from high-pressure areas to low-pressure areas in an easily predictable cycle. However, our planet is constantly rotating, which adds an interesting variable and affects how wind moves across the surface of the planet. The coriolis effect is the result of this rotational force exerted on anything moving relative to Earth. 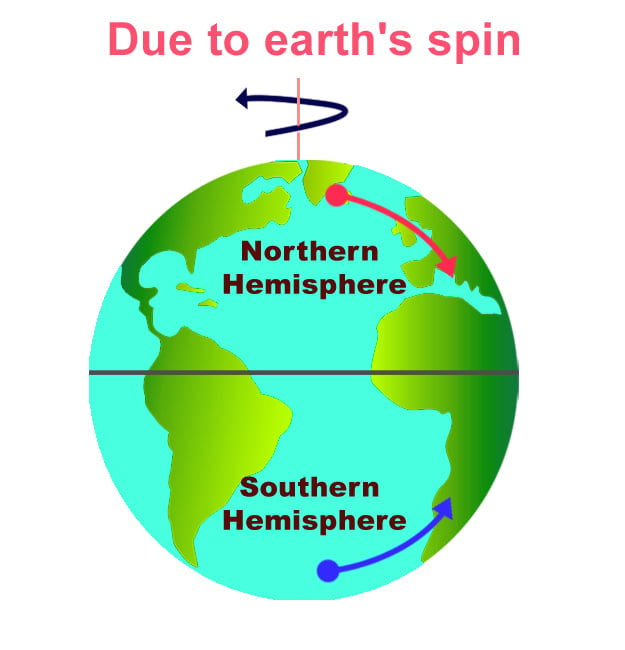 Some of you may be struggling to understand how the same movement of air that creates a gentle afternoon breeze can also create a hurricane capable of blowing houses down. When air moves across a pressure gradient (from high to low), it generates a certain amount of force.  If there is a high-pressure area and a low-pressure area very close to one another, the pressure gradient will be high, the air will shift locations more forcefully, and wind speed will increase rapidly. Across the surface of the planet, there are myriad regions of high pressure and low pressure that are constantly shifting and moving, patterns that you can see on weather reports and wind maps. A combination of the rotation of the earth, fluctuating pressure gradients, and changing temperatures all combine to create wind of varying strengths, from a breeze tinkling a wind chime to gusting gale-force winds that can knock you right off your feet!

While wind is easy to ignore or overlook, it is actually a fascinating natural system that is responsible for weather patterns and atmospheric balancing across the globe. Wind is basically how the atmosphere moves heat around the planet, representing an important cycle that affects seasonal climate, rainfall, and our daily lives!