The heat loss due to convection and sweat evaporation at the skin is greater than the heating effect due to friction with the air molecules at such a low velocity.

At some point in life, you’ve probably stuck your arm out the window of the car that you were traveling in and felt a comforting coldness surge through your arm. In fact, the faster the car goes, the colder it seems.

On rather warm days, this coldness is actually quite inexplicable. After all, when your arm is outside, it is constantly colliding with air molecules. This collision is responsible for aerodynamic friction, and shouldn’t friction with the air cause heating, rather than cooling?

Also, why does your arm cool down when traveling at 60 mph (96.5 km/h), whereas a spacecraft traveling at 25,000 mph (40,233 km/h) is equipped with a heat shield to protect from damage caused due to aerodynamic heating?

Before jumping into the crux of the matter, it’s important to understand the basics of friction, collision and heat transfer.

The Science Of Heat And Relative Motion

Friction: Thou Shalt Not Move

Imagine that two cardboard boxes are stored on top of each other. Suddenly, both boxes are pulled in opposite directions. It’s slightly difficult to pull those boxes, especially if the sliding surfaces are jagged. This is because there exists a force that tends to resist the relative motion of the boxes as they move opposite to the other.

This force that resists motion is called friction. It arises due to the interlocking of the jagged surfaces with each other, as pushing two interlocked surfaces requires microscopic physical deformations to allow for further movement.

Friction can also be observed within the flow of liquid. As you may know, a liquid flows in layers. The bottom layer, in contact with the ground surface, moves the slowest, while the topmost layer moves the fastest. The layers between the top and the bottom move with increasing speeds relative to the top surface.

This difference in speeds of layers results in relative motion between them, and thus the development of a frictional force. This force is called viscosity in fluid dynamics terminology. In common parlance, viscous force is also called drag. Similarly, when gases (like air) flow, they also experience a viscous force in an identical mechanism as liquids.

In the motion described above, the common thread is the development of a motion-resisting force between two relatively moving parallel layers.

Frictional force is a result of two surfaces coming into contact with each (collision) other and moving parallel relative to each other. Thus, some kinetic energy transfer occurs. Some of this kinetic energy is converted to heat energy. This is responsible for raising the temperature at the interface of the two surfaces. When air strikes a surface, two processes occur.

The first is the stagnation of some air molecules that strike the surface head-on due to the geometry of the surface. All of the kinetic energy of the air molecule is lost and they remain at rest (hence the term ‘stagnation’). This results in an increase of pressure in that region, and is called a stagnation point. The amount of heat transferred per unit time, q, at stagnation points is given by:

Hst = enthalpy of the fluid layer at stagnation point

Hw = enthalpy of wall (thermodynamic wall is an imaginary surface parallel to the direction of fluid flow across which mass transfer doesn’t occur, only energy transfer. In our case, the wall is the solid surface)

Tw =temperature of the wall 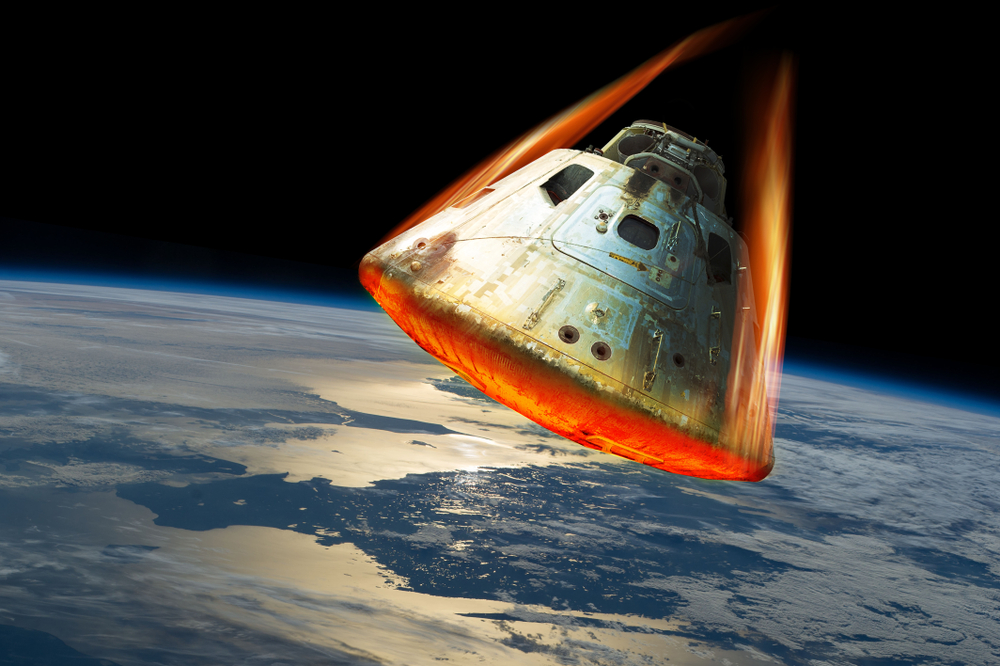 The heat shield at the front of a re-entry module glows due to aerodynamic heating caused by atmospheric friction. (Photo Credit : Marc Ward/Shutterstock)

Also Read: To Keep A Cup Warm, Should You Hold It In Your Hands Or Put It On The Table?

HR = boundary layer recovery enthalpy (boundary is the air layer in contact with the surface. Recovery measures a loss of pressure due to high velocity)

Rest of the terms are the same as in (i)

The heating effect due to air (aerodynamic heating) is the sum of (i) and (ii). 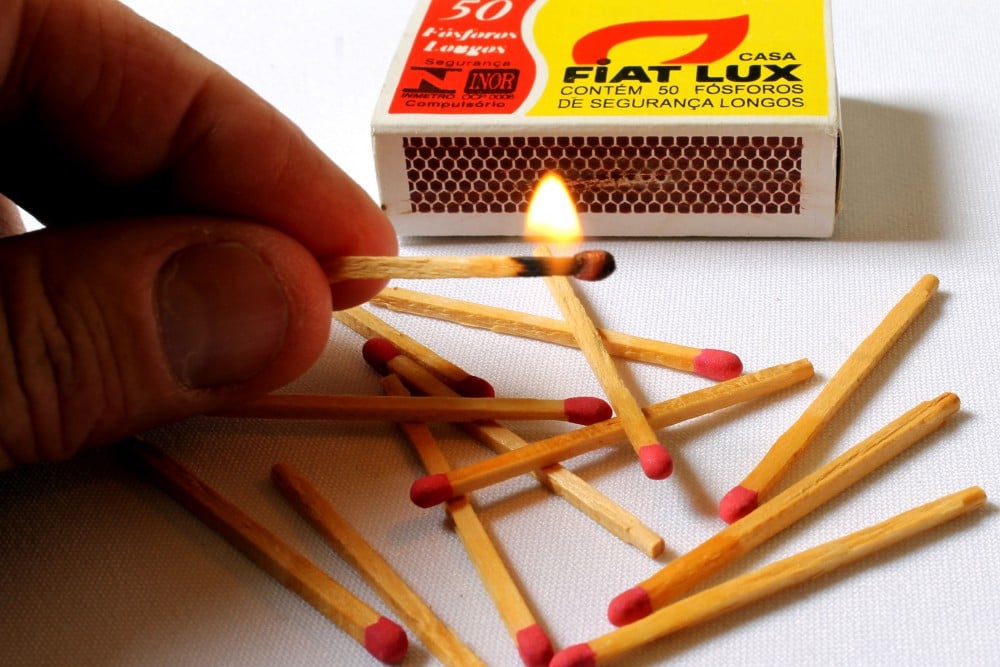 Frictional heating is responsible for igniting the red phosphorous coating on a matchstick. (Photo Credit : Pxhere)

The body maintains a core temperature of about 97oF—99oF (36.1oC – 37.2oC). Except during the peak of summer, the environmental temperatures remain near 30oC or below, which is colder than our body temperature. The air outside comes into contact with the skin and heat transfer from the body (higher temperature) to the air (lower temperature) occurs. A thin layer of warm air forms near the skin, which provides insulation from further heat loss.

However, when air flows, the warm layer is constantly pushed away by incoming colder air. A continuous cycle of heat loss occurs where the body loses heat to the surrounding air, which is then pushed away by colder air, only to be warmed up again. This results in the lowering of skin temperature and a feeling of coldness. This is called wind chill. Also, if there is sweat on your arms, fast-moving air increases the rate of evaporation from the skin, resulting in even more heat loss. 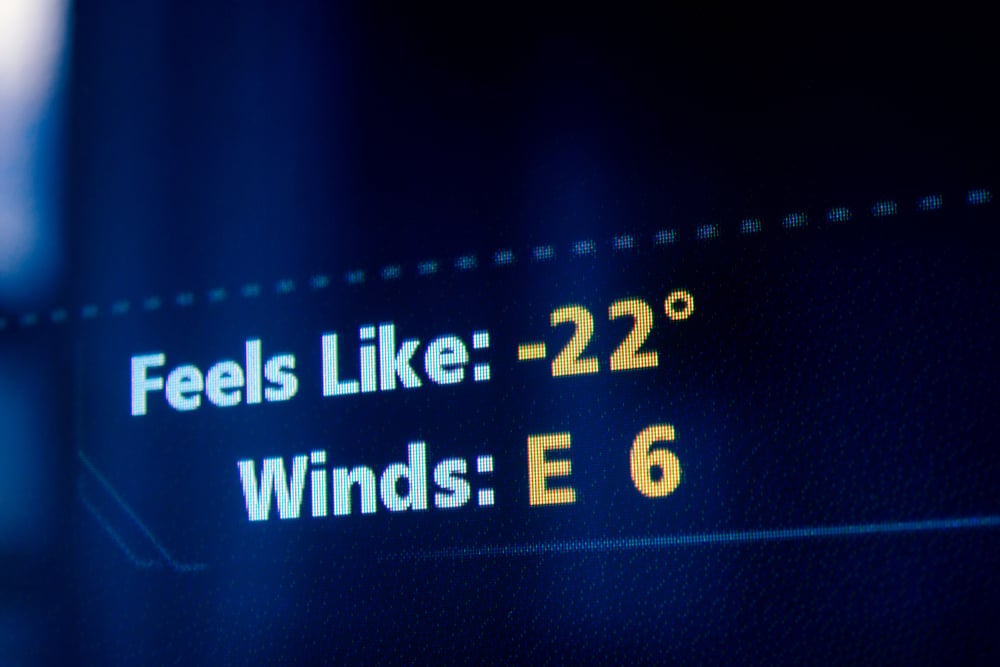 “Feels like” temperature takes into account the extra cooling of the skin caused by high-speed winds. (Photo Credit : Hadrian/Shutterstock)

The faster the air flows, the greater the wind chill.

The amount of heat transferred per unit time, Q is given by:

A = area exposed to convection,

Thot = temperature of the hotter object,

Tcold = temperature of the colder object

Having studied the basics of both, the obvious question that comes to mind is that what happens when these two processes oppose each other. What is the threshold beyond which wind chill gives way to aerodynamic heating?

Also Read: How Does The Sun’s Warmth Reach The Earth? Why Can’t It Reach Us Through Cloud Cover?

As airspeed increases, the rate of convective heat loss increases, and the body becomes colder. This loss of heat continues at subsonic speeds (lower than the speed of sound). As the supersonic limit is breached, the heating effect becomes much more dominant, and at speeds above Mach 2.0 (twice the speed of sound, 1534 m/h = 2469 km/h), heat shields are required to protect against high temperatures (400oF/204oC). There is no universal threshold, since the heating effect also depends on the geometry of the vehicle. As a general observation, at speeds above Mach 1.0 (1235 km/h or 767 m/h), the heating is significant enough to cause damage to exposed electrical equipment.

Coming back to the original question, yes, it is possible to warm up your arm while moving, but you’d have to be moving pretty darn fast to actually cause aerodynamic heating!