Yes, there are lightning strikes on other planets.

One of my favorite things about planet Earth is the remarkable weather patterns that are continuously shifting and affecting life around the globe. Watching storms is a particular favorite; nothing feels better than watching a warm summer storm roll in over the horizon—the streaks of lightning and the roaring crash of thunder. With such a complex atmospheric composition and unique climate and topographic features, our planet’s weather is extremely unique—so far as we know.

However, we know that other planets have atmospheres as well, so what does that mean for their weather? Are their hurricanes on Uranus? Floods on Venus? Massive lightning strikes on Saturn? To get a handle on the wide variety of weather in our solar system, particularly lightning in its many forms, we need to understand the science behind lightning!

In general terms, a lightning strike is a powerful electrical discharge, typically of a very short duration, that results from opposing electrical buildups equalizing and then releasing the pent-up energy. In the context of a storm, a thundercloud will have an area of negative charge near its base, and a region of positive charge that rises to the top of the cloud and begins to spread out horizontally.

On Earth, lightning strikes occur between two different clouds, between a cloud and the ground, or within two regions of the same cloud. The main conditions that are required for any sort of lightning discharge to occur include a significant difference in potential between two regions (caused, in storm clouds, by the collisions of supercooled water droplets and soft forms of hail (called graupel). As this charge continues to build up, it will eventually discharge, overcoming the atmospheric medium barrier and electrifying the air molecules on its path to the ground, resulting in them becoming plasma, and the visual aspect of a lightning bolt. The accompanying thunderclap that nearly always follows a lightning strike (except in the case of heat lightning), is actually a shockwave caused by molecules experiencing an instantaneous rise in pressure.

Basically, lightning is a natural effect of dynamic, shifting atmospheric conditions, so logic would argue that other planets with changing atmospheres would similarly have storms, and lightning, right?

Is There Lightning On Other Planets?

Now that you understand the climatic basis of lightning, it makes sense that there would be lightning on other planets, but it might look very different than it does on Earth!

The red planet has fascinated human beings since we first saw it gleaming like a ruby in the sky. Most people know that the majority of Mars’ atmosphere has been stripped away, leaving it a barren wasteland, so hearing that there are storms and lightning on Mars may come as a surprise. The massive dust storms that blow across the Martian landscape may not be filled with moisture like storms on Earth, but they are instead filled with incredibly fine Martian soil. 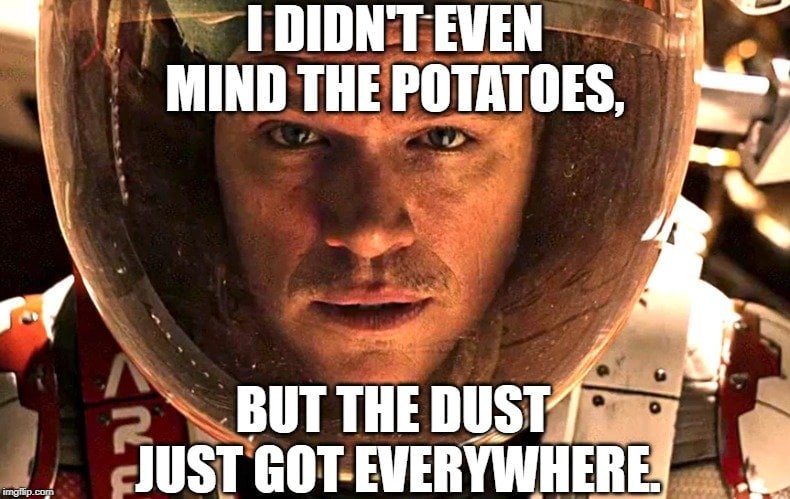 Due to the reduced gravity, this fine soil can be picked up by even a light breeze and carried for hundreds of miles before gravity brings it back to Earth. The swirling of different particles in the midst of these storms will create energy differentials, which will eventually build up within these “clouds” and be released. Whistler waves have been detected in these huge dust storms, and some visual evidence of lightning has also been found. Unfortunately, the NASA rovers that have long inhabited the Martian landscape have yet to snap a proper photograph of Martian lightning from the ground!

If you’ve ever read anything about Jupiter, the largest planet in our solar system, then you know it is absolutely wracked with storms. Jupiter is a gas giant, so swirling atmospheric conditions is logical. The largest storm system on Jupiter, one that has been raging for more than 300 years, is known as the Great Red Spot (GRS) and is about twice as large as Earth! Interestingly enough, various flybys by NASA spacecraft (Cassini and Juno) have confirmed that the lightning on the planet is very similar to the lightning we experience on Earth. Whistler waves, as explained above, have also been detected from Jupiter, in addition to visual confirmation of lightning strikes! 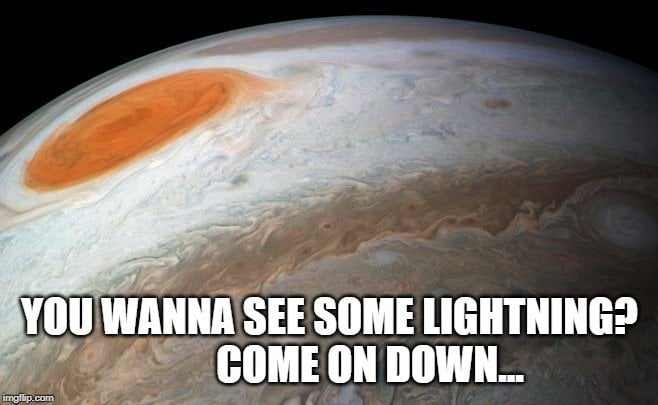 It was long thought that the magnetic orientation and atmospheric composition of Venus made Venusian lightning impossible, despite its similar size and density to Earth. However, data brought in by more recent missions has revealed Whistler waves emanating from the planet, at a similar intensity and frequency as lightning on Earth! Venus, being closer to the sun than Earth, receives a great deal of energy from the sun into its atmosphere. As that energy is distributed and begins to separate into different regions, a charge will eventually build up and be released. If the surface of Venus wasn’t so incredibly hot, watching a storm there might not be too dissimilar to watching a summer storm on Earth!

Weather on Other Planets

As you likely know, when it comes to ideal real estate in the solar system, Earth is definitely our best option. Yes, we have to deal with brutal winters, changing seasons, hurricanes and other natural disasters, but we should be grateful! We live in a veritable paradise in comparison to the other planets in the solar system. The planets closer to the sun than Earth—Mercury and Venus—are incredibly hot, about 800 and 864 degrees Fahrenheit, respectively. Mars is a barren wasteland without almost any atmosphere to speak of, so survival there isn’t exactly “possible”. As you move further away from our planet, you arrive at the gas giants, where there isn’t even any solid ground to stand on! Finally, you could choose to inhabit the ice giants, where the surface temperature drops to nearly -400 degrees Fahrenheit (Neptune). Those extreme conditions make living there impossible (for now), but studying the weather on those other planets can give us critical data about our own climatic future. Earth has the most complex weather system in the solar system, thanks to our complex planetary composition, with its atmosphere, ice caps, seasonal variations, the impact of mankind, and so much more. Since we can only predict Earth’s future climate based on our past, it is helpful to see how other planet’s atmospheres have evolved or developed, potentially providing insight for our own planet’s weather destiny!