Lightning strikes on airplanes are not rare, and usually do not have a serious impact. An airplane is designed to withstand a powerful bolt of lightning without compromising the safety of the people inside. However, it is still important to take proper precautions to avoid flying into areas that are susceptible to lightning strikes.

Every once in a while, you find yourself sitting next to a person in an airplane who just can’t seem to refrain from telling you all sorts of experiences and adventures they’ve had in their lives. They may tell you about a deadly voyage in particularly rough seas, a long trip where they drove for days on end, or about how their airplane was once struck by lightning in the air. You might have already guessed that in this post, we’re not particularly interested in the first two situations.

Have you ever been in an airplane that was struck by lightning during flight? What really happens when an airplane, much of which is metallic and therefore conducive to the flow of electricity, is struck by a bolt of lightning?

Let me inform upfront that lightning strikes on airplanes are not as rare as one might think. In fact, almost every commercial jet is struck by lightning at least once a year! There is a good chance that you’ve been in one when it was struck by lightning; you simply might not have realized that it was actually a lightning strike that hit your plane, and not just a ‘technical aberration’ in the smooth path of the flight.

A lightning strike usually hits an extremity of an airplane, like its wingtip or its nose, travels through the body of the plane, and then exits through another extremity. Since lightning carries a lot of charge and is incredibly hot, many people assume that a plane would be instantly engulfed in flames and crash. However, in most cases, lightning does not have as serious an impact as one might expect. A plane continues to function normally, even after having been struck by lightning.

How Does An Airplane Stand Such A Tremendous Onslaught Of Energy? 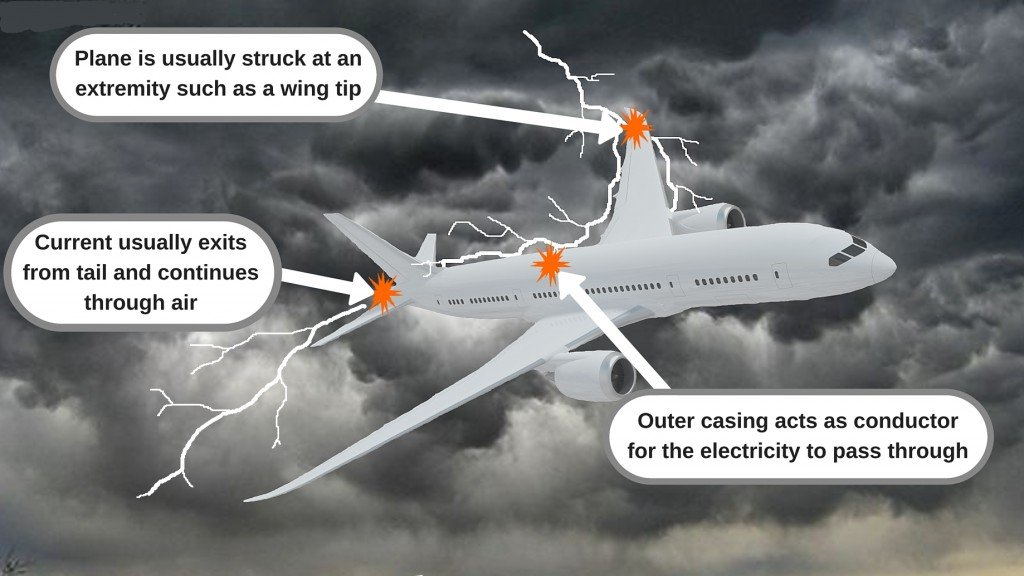 Lightning strikes occur in clouds all the time; in fact, sometimes it’s the airplane itself that causes a lightning strike when it travels through clouds. Keeping this in mind, an airplane is designed in a way that it can withstand powerful bolts of lightning at any time, anywhere, without compromising the safety of the people inside.

A bolt of lightning may wield an enormous amount of energy, but in essence, just like any other circuit, it’s just a flow of electrons in a particular direction. The best thing, obviously, is to avoid a lightning strike in the first place. However, if you happen to be in its path, your best bet is to allow it to pass through without any resistance.

This is precisely what airplanes do. The fuselage (i.e., the body of an airplane) is largely composed of aluminum and some other metals, all of which are good conductors of electricity. Some airplanes, including Dreamliners and Boeing Airbus A350s, are made from lightweight carbon composite that is then covered with a slim layer of copper (copper is an excellent conductor of electricity).

Therefore, the airplane becomes a Faraday cage of sorts, ensuring the absolute safety of the people within it. For more information regarding Faraday cages, check out Since A Car Has Rubber Tires, Are You Safe Inside During A Lightning Storm?

Although it’s true that modern aircraft are well-designed to withstand a bolt of lightning without affecting the people onboard, none of this means that planes are absolutely safe from them. At times, pilots report non-fatal snags in equipment or a brief loss of communication following a lightning strike. Therefore, a lot of time, thought, and effort goes into deciding the prospective path that an airplane is going to take before its flight to avoid flying into areas that are susceptible to lightning strikes.

While a number of famous, non-fatal incidents of lightning strikes have occurred in the past, it’s of the utmost importance to take proper precautions. Given the fact that you actually ‘fly’ at thousands of feet above the ground, it’s always best not to test the ‘protection from lightning’ feature by flying through lightning-prone areas on purpose. It’s never wise to tempt fate!