When anyone talks about human beings in space, one assumption is implicit (unless otherwise stated)… that the human in question is in the ISS or the International Space Station, a large space station that orbits the Earth at an altitude between 330 and 435 kilometers. Therefore, if we’re talking about skydiving or jumping from space, we should assume that the astronaut has jumped from the ISS.

The question is: what would happen to an astronaut who jumps or skydives from the ISS? 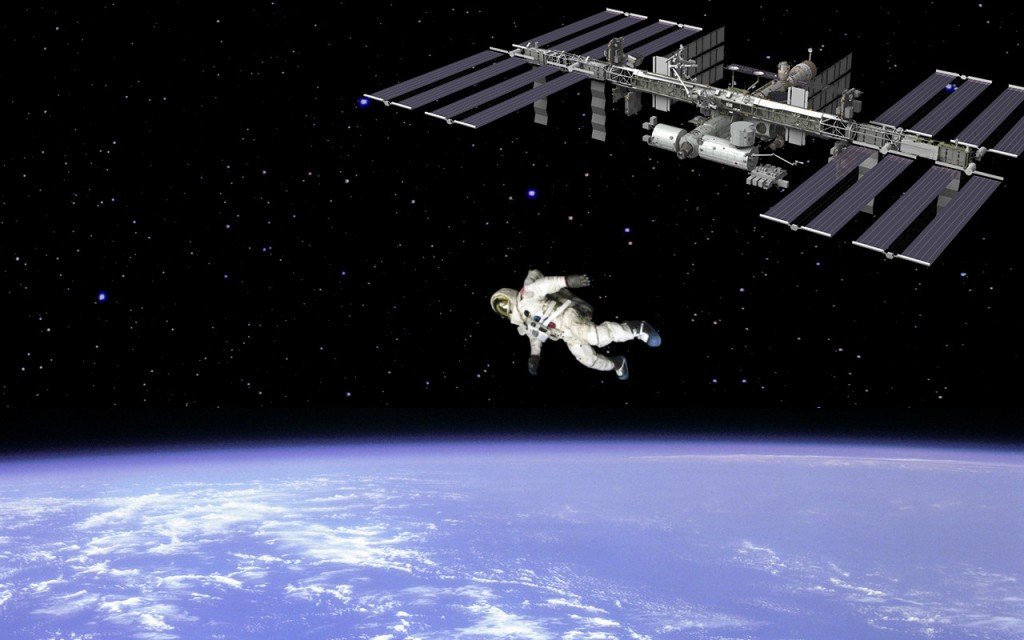 Short answer: The astronaut will orbit the planet and eventually plummet to Earth, only to burn up during re-entry* (*some conditions apply).

Differences between a ‘regular’ skydive and a space skydive

We should begin by saying that skydiving from the ISS is very, very different from regular skydives that folks attempt back on Earth. In the latter, you jump from a plane that’s usually cruising at an altitude no more than 2.84 miles (4.6 kilometers) (Source) above the ground, but if you jump from the ISS, you will essentially be jumping from a height of at least 205 miles (330 kilometers, which is the lowest point in the orbit of the ISS)! 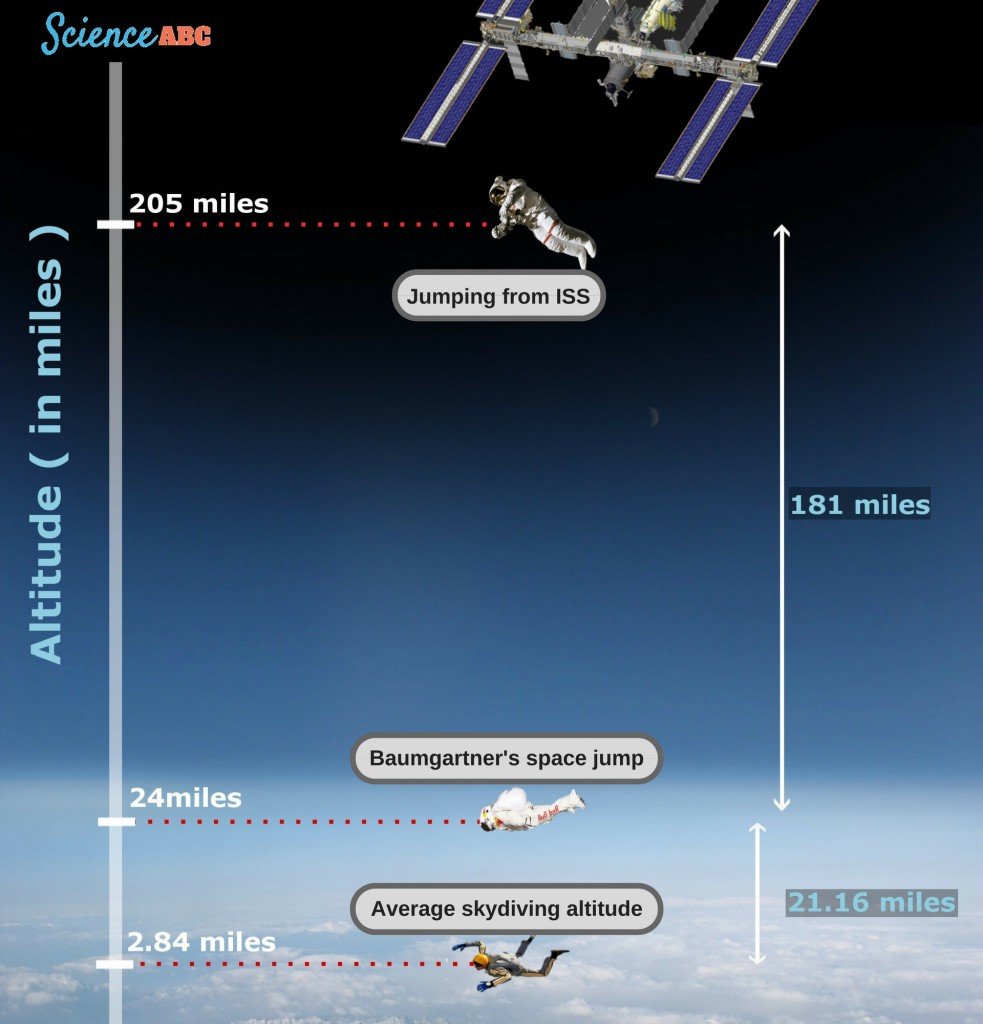 A comparison of the altitudes of regular skydives, Felix Baumgartner’s ‘space jump’ (he holds the record of the highest vertical freefall distance without drogue) and an astronaut jumping from the ISS

The difference of over 200 miles between the altitudes of these two jumps should be reason enough not to put jumping from the ISS in the same category as ‘regular’ skydives.

Speed of the craft from which the skydiver jumps

Another thing that people mistakenly assume about the ISS is that it’s a slow-moving object (some even think that it doesn’t move at all) that hovers a couple hundred miles above Earth in space. Therefore, they think that jumping from it wouldn’t be that big of a deal. However, that’s simply not true. The ISS is definitely moving – and moving very, very fast at that! Its orbital velocity, i.e., the speed at which it travels around Earth, is a staggering 17,200 mph (27,600 kmph) (Source). To get some idea of how fast this is, consider this: if you fire a bullet from one end of a football field, the ISS would cross the entire length of the field before the bullet even travels 9.1 meters (10 yards) (Source). 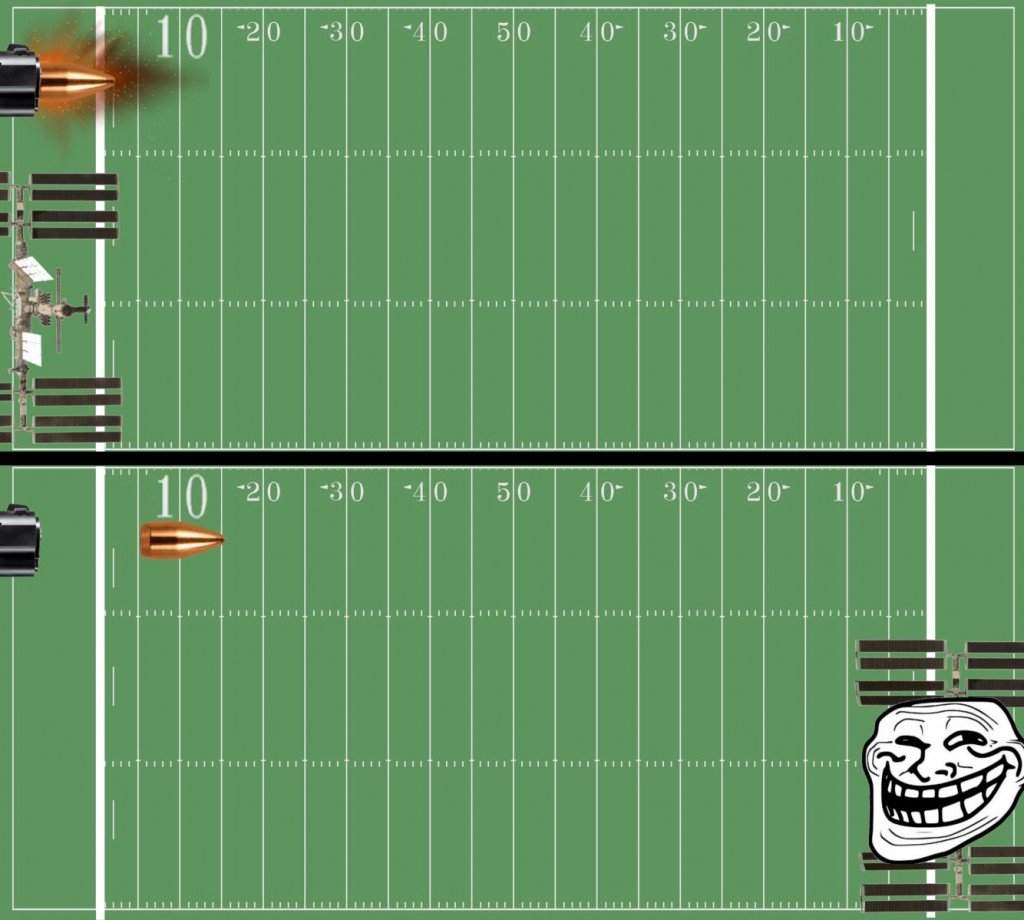 The ISS can easily trump a flying bullet in a race

It’s quite evident that the airplane that a person jumps from during a regular skydive travels nowhere near as fast as the ISS.

A person skydiving from a standard altitude of 12,000 feet (2.27 miles) above the ground falls through the sky for a minute and doesn’t require supplementary oxygen to sustain them during that fall (Source). The reason for this is simple: at that height, the atmosphere is thick enough to provide ample breathable oxygen to the skydiver during his plummet. However, this is not the case if you’re jumping from the ISS. It is so high above the surface of the Earth that the air becomes too thin (to the point of non-existence) to breathe. Felix Baumgartner, who accomplished a ‘space jump’ by jumping from a capsule 39 kilometers (24 miles) above the ground (which is still way below ISS’s altitude), needed supplementary oxygen to sustain him during his plummet.

Therefore, a person jumping off the ISS would need a very large amount of oxygen in their suit, but that wouldn’t be used during their plummet to the Earth, because there would be no FALL in the first place…

What would happen to someone who jumped off the ISS?

Despite reading through all the things I mentioned above, if an astronaut (let’s call him Dave) still decides to try the unbelievable feat and leap off the ISS, things would be very, very bleak for him.

Assuming that his ‘jump’ only consisted of springing from the door or simply letting go of the ISS (i.e., his jump is not aided by any artificial means, like a rocket), he would be traveling at the same speed as the ISS, i.e. 17,200 mph (initially) and would continue to orbit the Earth. Unlike regular skydives, he would not plummet to the Earth immediately, for the same reason why the ISS does not fall to Earth: speed.

What most people fail to understand is that the ISS is, in fact, falling towards Earth all the time, even right at this moment! 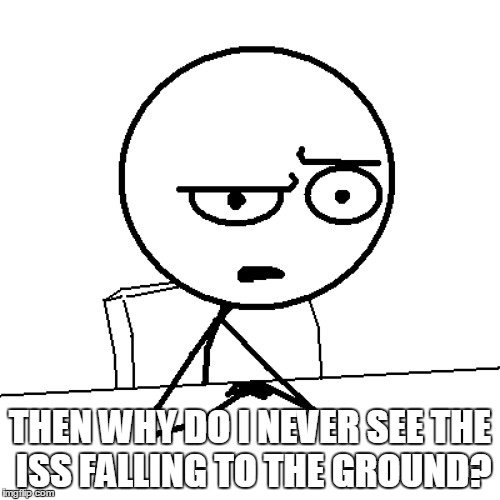 You see, the ISS is perpetually falling to the ground, but it never actually hits the ground. This is because its horizontal speed is so incredible high that when it’s about to hit the Earth, the planet curves beneath it.

Let me put it this way: suppose you throw a rubber ball at a very, very high speed (I’m talking a dozen miles/second, which is physically impossible, unless you’re the Hulk) from the ground. Now, unlike other balls, which fall to the ground fairly quickly after you’ve released them from your hands, this one doesn’t. This is because its horizontal speed is so high that when it’s about to touch the ground, the ground essentially curves away and the ball continues to move. Insert the ISS in the place of the ball and perhaps you can understand why the ISS is able to safely orbit the Earth and never come crashing down.

So, depending on the speed with which this imaginary astronaut jumped out of the ISS, Dave would settle into a slightly different orbit than the ISS itself and would continue to orbit the Earth.

Since he doesn’t have any rockets attached to him, which could boost him periodically to sustain his orbit (just like the ISS does), he would gradually start to fall out of orbit (come closer and closer to the Earth). He would be at a very high risk of running into satellites and massive objects in other orbits, and there would be no way he could avoid that! For all of that to happen, a very important assumption is that Dave has a special suit that would take care of his water, food and most importantly, oxygen requirements while he’s circling the Earth (for the record, such a suit doesn’t currently exist).

After a very long time (e.g., months), when Dave fell far enough out of his initial orbit, his orbital velocity would decrease exponentially, causing him to spiral down to Earth, likely burning up during his re-entry.

Keeping in mind the challenges and the ultimate outcome, here’s my advice to anyone who wants to perform a skydive from space… Don’t!

How much do you know about skydiving from space?