If the Sun suddenly disappeared, the planets would continue in their orbits and eventually leave the solar system. Life on Earth would become very difficult, as the planet would freeze and the atmosphere would disappear.

We’re so used to the environmental conditions that surround us (e.g., oxygen and other gases, water, sunlight and even dust) that we almost always take them for granted. Our temperament is basically stating, “Where’s oxygen going to be if not on Earth?” or “How can the Sun NOT provide light to our planet?” and so on.

However, just for the sake of conversation, have you ever wondered what would it be like if the Sun just… disappeared? Poof! Just like that… What would happen to the comets, satellites, planets, and other celestial bodies of the solar system? More importantly (and selfishly), what would happen to us?

Significance of the Sun

The sun is a gigantic star that sits right in the middle of our solar system. It’s a huge ball of fire that continues ‘burning’, due to its constituent elements, and it is by far the most important source of energy to sustain life on Earth. Not just Earth, but all the other celestial bodies of our solar system are locked in elliptical orbits around the Sun. It’s fair to say that the Sun is the supreme power of the solar system, keeping everything in a state of calm and tranquility.

As mentioned earlier, planets and other celestial bodies revolve around the Sun in elliptical orbits. To be more precise though, all planets are in a state of continuous of free fall towards the Sun. Hence, if the Sun magically disappeared from within the solar system, every planet would continue with their forward motion and eventually race beyond the boundaries of our solar system. Consider this: Earth revolves around the Sun at a staggering speed of 67,000 miles per hour (107,826.05 kmph). In the case of a sudden loss of the Sun’s gravitational pull, the Earth would shoot out of its orbit at the same speed! 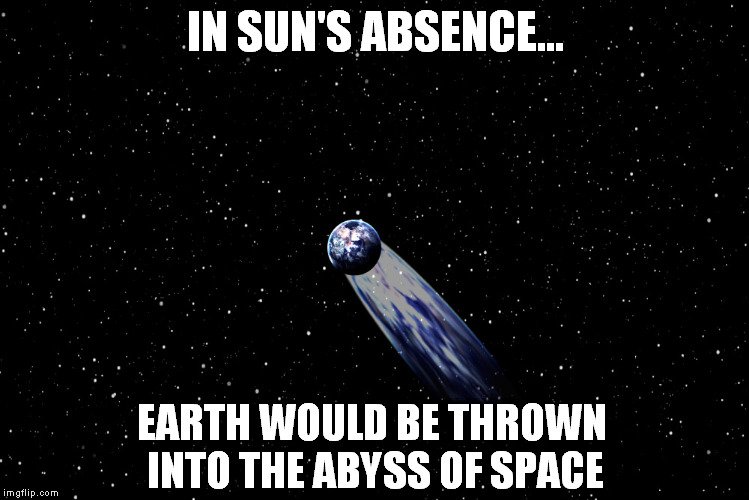 They would go on and on through the darkness of space; it would be hundreds of years before another object came into their vicinity.

The above section explained the physical state of the various planets revolving around Sun, including Earth, but what about the living organisms on Earth.

First of all, you should know that Earth wouldn’t go dark instantly. You see, light from the Sun takes around 8 minutes to reach our planet. Therefore, it would take precisely that long before every last bit of sunshine arrived on our planet before Earth was plunged in total darkness (there would still be artificial light and the stars would still shine, though). If you’re on the side of the planet that’s facing away from the Sun (i.e. it’s nighttime), the moon would go dark too, as it would no longer have the Sun’s light to reflect.

Also, it just so happens that our planet is rather good at retaining heat; so stuff wouldn’t freeze right away either.

The gaseous layer enveloping Earth would help it retain heat for a while (Credit: Vadim Sadovski/Shutterstock)

However, that doesn’t mean we would be kept warm eternally in the Sun’s absence. In a few days, the temperature on Earth would drop a few dozen degrees below freezing, and in a matter of weeks, it would be pretty close to absolute zero, which certainly would not be pleasant if you have a thing about being cold. The atmosphere would also freeze and fall down to Earth, leaving us utterly exposed to the harmful radiation waves that roam through space.

Life on such a frozen, atmosphere-lacking planet would undoubtedly be very, very difficult. Most living organisms would perish, barring the ones living beneath the surface, as they get heat from Earth’s core. As far as humanity is concerned, we’d have to clump together in large, closely-held (in the real sense of the word) groups to use the energy from nuclear fusion reactors while we figured out ways to survive without a sun!

In other words, life on Earth won’t end immediately in case the Sun disappeared… it would take a little longer than that!