Yes, theoretically speaking, a moon can have its own moon. Around every celestial body, there’s a well-defined region, called the hill sphere, within which the gravity of that body dominates the gravitational pull of a bigger and more massive, but distant celestial body.

Apart from the Milky Way, there are 54 other galaxies (a majority of them are dwarf galaxies) in a cluster known as The Local Group, which also revolve around a central mass. All of this is to say that as far as we can tell, all celestial bodies revolve around something else.

Now, if the conventional definition of a moon is considered, it’s a natural satellite that revolves around a bigger celestial body in a well-defined orbit. In that sense, it could be said that every celestial body has a moon. The sun’s moon is Earth and the Earth’s moon, is… the moon!

Can a moon have its own natural satellite? Moon lies within the Hill Sphere of our planet.

The Hill Sphere of an astronomical object is a region around it where its gravitational pull is stronger than another body, which is bigger than the first body, but too far away.

Take, for example, the Sun-Earth-Moon system. The Sun’s satellite is Earth and therefore it revolves around the former as Earth falls within the Hill Sphere of the Sun. This means that Earth only experiences the gravity of the Sun and not some other distant star.

Similarly, Earth’s satellite is the Moon. Since our planet’s Hill Sphere extends up to 1.5 million km in all directions, the Moon, which is merely 380,000 km away from Earth, easily falls under the influence of the gravitational tug of Earth. Another way to look at Earth’s Hill Sphere is that within those 1.5 million km, Earth’s gravity dominates over the gravity of the Sun, which is why the Moon orbits Earth and not the Sun. Hypothetically speaking, if the Moon were to break away from its orbit and escape Earth’s Hill Sphere, it would indeed end up orbiting the Sun, just as so many other members of our solar system do.

Note that the heavier a celestial body, the bigger is its Hill Sphere. Take, for instance, Jupiter. Its Hill Sphere extends up to 0.36 AU in all directions, which is one of the reasons why it has so many moons and why it so strongly influences the trajectory of comets that pass it by. There are 69 known moons of Jupiter.

Why doesn’t the Moon have its own moon (natural satellite)?

While the Moon can, theoretically speaking, have a sub-satellite of its own within a distance of 60,000 km from its surface, still it doesn’t have one. Why is that?

In one word: tides.

You see, the Moon follows a synchronous motion around Earth; it takes the same amount of time to complete one revolution around Earth and to rotate once on its own axis. This causes the moon to always show the same side to us.

The first animation shows how the Moon revolves around our planet

This kind of locking is a direct upshot of the tidal forces between the Earth and the Moon, which are responsible for causing the tides in Earth’s oceans.

If there’s a sub-satellite within the Hill Sphere of the Moon, it will experience a gradual decay in its orbit due to tides. Over time, the orbit of the sub-satellite will keep getting smaller and smaller, until it either crashes into the Moon itself or is shredded to smithereens due to tidal forces.

Note that such decay of a sub-satellite is gradual, and very slow. It may take thousands of years for an orbiting body to crash into its parental celestial body. 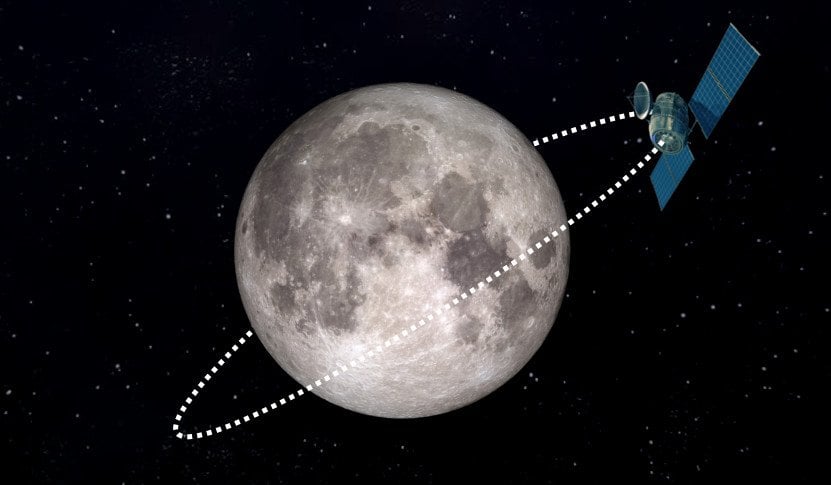 An artificial satellite around the moon

That’s the reason the artificial satellites we send to the moon stay up there for quite some time, do their work (which usually consists of taking pictures of its surface and making various other observations), and then finally crash into the lunar surface.

Why Venus and Mercury have no Moons?
References
Help us make this article better
Tags: Earth, Milky Way, Moon, Solar System, Sun
About the Author