Pick a person out at random and ask him/her a basic question… How many moons does our planet have? In most cases, people will give the obvious answer: Earth has only one moon. And yes, you’d be correct most of the time, but not all the time. 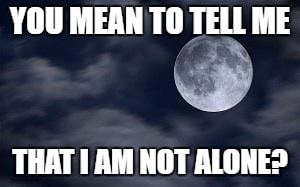 In 1997, a quasi-satellite named Cruithne was discovered. Cruithne scuttles around the inner solar system in what’s called a horseshoe orbit. Its  motion is “choreographed” in such a way that it remains stable and avoids colliding with our planet. This relationship was revealed in a paper by Paul Wiegert, Kim Innanen and Seppo Mikkola, which was published in the British-based science journal Nature on June 12, 1997.

Cruithne completes a full orbit around Earth once every 800 years, but during that same amount of time, it completes roughly 800 orbits around the Sun. The reason for is that this mini-moon  is more gravitationally bound to the Sun than Earth. To compare, the moon, which is more gravitationally bound to Earth, orbits Earth once every 27 days and orbits the Sun once every 365 days – the same as our planet. So technically, it is a moon of the Sun. As opposed to earlier claims, we cannot justify Cruithne as being Earth’s second moon.

However, don’t be too disappointed just yet…. there’s more. It turns out that there really is another moon. NASA recently announced the presence of a another mini-moon, named 2016 H03. 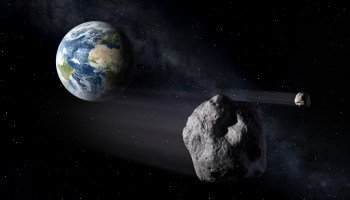 This  second “moon” is actually an asteroid that is currently locked into “a little dance” with Earth, and it has been dancing for the better part of a century. This rock’s orbit is highly elliptical, causing it to go slightly off tangent at a distance between 38 and 100 times our planet’s primary moon, making it bob up and down across Earth’s orbital plane.  NASA scientists say that Earth’s new “mini-moon” cannot be considered a true natural satellite, but more appropriately, a quasi-satellite or a near-Earth companion.

This means that 2016 H03 doesn’t loop around the Earth in a nice ellipse like the moon we know and love, or like the artificial satellites we eject into orbit. It was first spotted on April 27, 2016 by the Pan-STARRS (Panoramic Survey Telescope & Rapid Response System) PS 1 telescope in Haleakala, Hawaii. 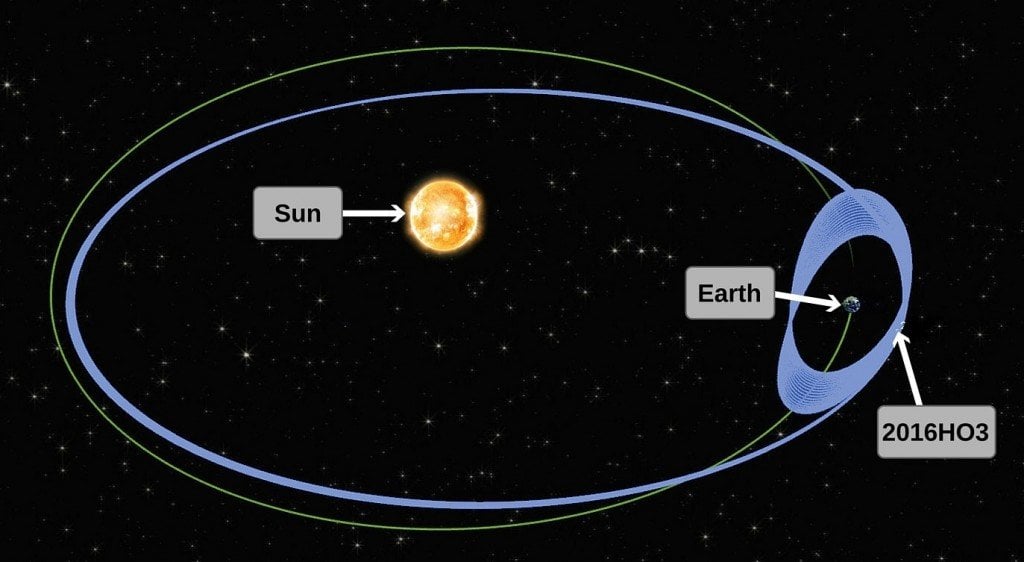 The orbit of 2016HO3 is highly elliptical.

According to Dr Paul Chodas, the manager of NASA’s center for NEO studies, 2016 HO3 is the most stable example of a quasi-satellite near Earth’s orbit. Its orbit around Earth drifts a little ahead or behind from year to year, but when it drifts too far forward or backward, Earth’s gravity is just strong enough to reverse the drift and hold onto the asteroid so that it never wanders farther away than roughly 100 times the distance of the Moon.  The same effect also prevents the asteroid from approaching any closer than approximately 38 times the distance of the Moon.

HO3 is tilted by about 8° and it circles the Sun for 365.93 days, which is slightly longer than Earth’s 365.24 day-long year. Essentially, this small asteroid is caught in a dance with Earth, and we didn’t even know about it until now!

NASA has assured the world that 2015 HO3 isn’t much of a threat to the course of motion of the moon and the Earth, and it is unlikely to collide with them when it finally leaves the orbit.  Therefore, technically, it’s a moon and not a moon at the same time.

Our beloved Moon has a little companion, but let’s just hope they never meet, because the result might prove disastrous!