The main reason it takes human babies a year to walk, when other animals walk much sooner, is because our brains don’t develop in the same way as other mammals. Our brains are much more complex, and we are learning to much from a very early age, so the skills required for humans to walk are simply not as easy or quick to develop.

If you’ve ever watched a nature documentary, you’ve likely seen a number of different animals being born. It’s one of the most beautiful and incredible events to witness, regardless of species, but you probably noticed something very odd. For many animals, from elephants and zebras down to tiny rodents, babies seem much more capable and mobile than human infants.

Newborn horses often stand up on their own two feet within an hour; many other species of mammals are walking and performing certain tasks (e.g., holding onto parents while moving, grasping objects) within days of their birth. Humans normally don’t take their first step until they are at least one year old. If we’re the “dominant” species on the planet, why does it take so long for us to take a few steps?

Short answer? Our brains don’t develop in the same way as other mammals… but why?

Hopefully everyone reading this article has some understanding of evolution and the history of human beings. Somewhere around 4 million years ago (although some researchers would argue as early as 7 million years ago), early transitional species, such as Australopithecus, developed bipedalism, meaning that they stood and moved on two legs, rather than four. Researchers believe this was largely due to their change in environment. Apes came down out of the trees and began moving through different terrain, namely the savannah, so a higher vantage point was helpful to spot and avoid predators.

Over the course of hundreds of generations, this shift to bipedalism caused a number of alterations in spinal cord structure, and also caused the pelvis to narrow, making it much more similar to the shape of our pelvis today. When the pelvis narrowed, that also made the birth canal smaller, which limited the size that a baby’s head (and brain) could be before birth. However, walking upright offered unprecedented development of these early human brains, including problem-solving and social aspects that had been previously unseen in primate evolution. At a certain point, this brain development reached a detente with birth canal size; if brains developed any further inside a mother’s womb, the baby wouldn’t be able to be born. In other mammals, from hedgehogs to horses, brains are able to fully develop before birth, whereas in human beings, the brain must develop after birth to a much larger degree.

The Helplessness of Human Infants

While it is easy to confidently call ourselves the most advanced species on the planet, that isn’t necessarily true at the moment of birth. Human babies are far less neurologically developed than other mammals, and thus rely on their parents for care and protection before they can fend for themselves. Researchers used to believe that since our brains are so complex, and we are learning to much from a very early age, that the skills required for humans to walk are simply not as easy or quick to develop. Essentially, it was believed that walking was lower on the list of developmental priorities. 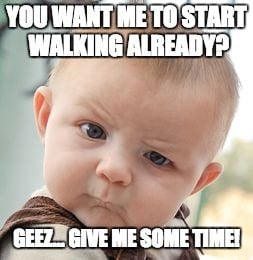 However, newer research has revealed that all mammals, regardless of body size or gestation time, gain the ability to walk at the same point in brain development. Although the main diversions between other mammals and primates/humans occurred roughly 100 million years ago, many brain characteristics remain shockingly similar. While we look very different from a horse or a rat, our genomes are surprisingly similar, suggesting that the founding principles and building blocks of evolution are still closely related between mammal species.

Aside from the slower brain development and growth in human babies, there is another factor that makes it more difficult for human babies to walk immediately after birth. It has been found that mammals who walk on the full length of their feet (or hind legs), rather than walking solely on their toes, also acquire the ability to walk much slower. For humans, who walk on two legs and use the full length of their feet, walking is a much more complex skill, requiring much more coordination and motor control.

This manner of standing and walking is called the “plantigrade stance”, and requires significantly more brain power than a horse needs to strut around on their “toes”.

The bottom line is that human beings have evolved to allot much more time for brain development. In this respect, the amount of things an infant needs to learn and develop is far greater in human beings, and the extended brain development time enables us to have such large brains with such incredible capacities.

It may be hard for certain people to swallow this truth – that an infant elephant is much more intelligent than a newborn human – but in the long run, this evolutionary end-around has definitely worked to our advantage. Provided that we have parents who are willing to care for us and keep us safe in those early months and years, the inability to walk doesn’t impact our lives to any real degree. Plus, we have the rest of our lives to run, jump, stroll, drive and pedal… taking it easy for the first year of life, and letting our brains develop naturally, isn’t that big of a deal!