Since plastic was only invented 115 years ago, there is no first-hand evidence of plastic completely breaking down, so our long-term estimates for plastic decomposition time are educated guesses based on various laboratory simulations and observations.

The planet is facing a dire environmental crisis that is being exacerbate by many different factors, but there is general global consensus that human activity is a large contributor to the problem, largely due to the ever-increasing emissions of greenhouse gases. However, while greenhouse gases and global warming receive a huge amount of attention today, the importance of recycling and the problem of growing waste and pollution has been in the public eye since the 1970s.

Despite the public awareness of this problem, the past decade has seen more plastic production than all of the plastic produced in the previous century. One-time use coffee cups, plastic bags, sanitary napkins, plastic water bottles and dozens of other readily disposed culprits have become ubiquitous in our society, leading many environmentalists to speak out about their dangers. Within these now-common refrains, we often hear a range of figures for how long it takes plastic to decompose, as an argument behind diligent recycling practices. The numbers for plastic decomposition may range from 20 years to 1,000 years, but where do these figures come from? If plastic has only been around for a little over a century, how could we possible know that it takes a millennium to decompose?

Before we explore the nuances of plastic degradation, let’s take a look at the overall idea of decomposition. After all, plastic isn’t the only type of waste that we need to find a place for on this planet. The problem of waste removal and disposal is everywhere, and when improperly managed, can affect the health and wellness of millions. As the saying goes, “buy land, because they’re not making any more of it”, and this couldn’t be more true. Human beings create a massive amount of waste, and we’re running out of places to put it. Huge and potentially toxic landfills pepper the planet and are almost full, trash is piling up on beaches, and the Great Pacific Garbage Patch is estimated to be roughly twice the size of Texas—the largest state in the continental US.

So where does all of our waste go? Well, those forms of waste that aren’t recyclable, namely non-plastics, biomass, food waste and anything else that goes “in the garbage” eventually make their ways to landfills. These landfills are essentially huge garbage cans that are designed to “hold” garbage, and properly mitigate any leakage from that waste as it decomposes (very slowly) to protect nearby ecosystems from such runoff. Landfills have been around in some fashion for thousands of years, but modern landfills employ methods of burying the waste beneath layers of soil, sealing it in with plastic, and even development on top of buried waste sites. 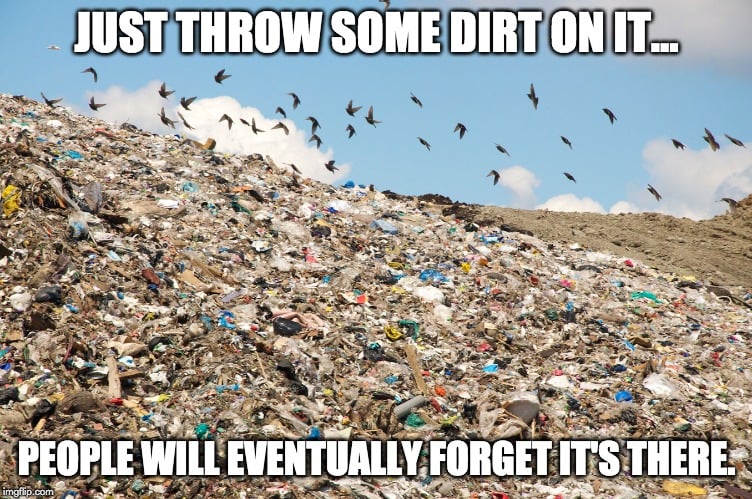 Some modern adjustments have been made, including landfills that are separated into biomass and food waste areas, which could potentially produce rich, viable soil, rather than having those untapped resources buried with the rest of the trash. However, this would require accurate separation of garbage by consumers and individuals, a broad social effort that has seen varying levels of success around the world. Additionally, advancements are being made to increase aeration and capture gas emissions, turning landfills into something akin to a bioreactor, but these steps forward are slow, expensive and not widespread.

In most landfills, decomposition is possible, but it happens extremely slowly, if at all. The waste in landfills is extremely dense, so there is a lack of oxygen, making it difficult for biological organisms to break down any biodegradable material. For those who practice composting at home, the decomposition process can happen quickly, in only a matter of weeks or months, but the conditions of water, sunlight and airflow are ideal for such rapid breakdown. This is not the case in most landfills. Most garbage that makes it to landfills will remain relatively unchanged, but will emanate methane, a dangerous greenhouse gas.

When it comes to things like newspapers, apple cores, cardboard, clothing, aluminum cans and wood, experts are able to accurately predict how long it takes for them to decompose because they take a relatively short amount of time. When properly aerated and exposed to microorganisms, a newspaper will break down in six weeks, an apple core will decompose within a month, and a cotton t-shirt will break down in about three months. On the longer side of things, tin cans take about 50 years to break down, batteries take about a century, and styrofoam will never biodegrade naturally!

Landfills handle about 50% of the waste produced every year around the world, so advancements in landfill design, management and technology are hugely important for our future. That being said, with limited real estate for any more garbage, mitigation of waste is critical, particularly when that excess waste is non-recyclable plastic, or if you are in an area where recycling isn’t widely available. The reason plastic is such a critical element of this problem will be explained below.

The serious problem with plastics is that they are often mixed in with normal garbage, but they don’t decompose in the same way as other materials. When experts want to test how long a given substance takes to be broken down, they use what is called a respirometer—a closed but aerated chamber with microorganisms in rich compost where the object can be gradually broken down. The amount of carbon dioxide emissions—as a result of decomposition—can be recorded, and the full decomposition time can be estimated, even if that figure is more than a century (i.e., an aluminum can).

However, when a plastic water bottle or plastic bag is placed in such a laboratory contraption, the microorganisms don’t begin to break down the material. Plastic is not a substance that is found in nature, and is therefore not capable of being broken down by microorganisms. That being said, certain plastics are photodegradable, meaning that the UV radiation from sunlight can cause the plastic particles to become brittle and break into smaller pieces, called microplastics. Now, while this is a form of decomposition, microplastics are another serious problem, since they can enter water sources and endanger marine ecosystems. 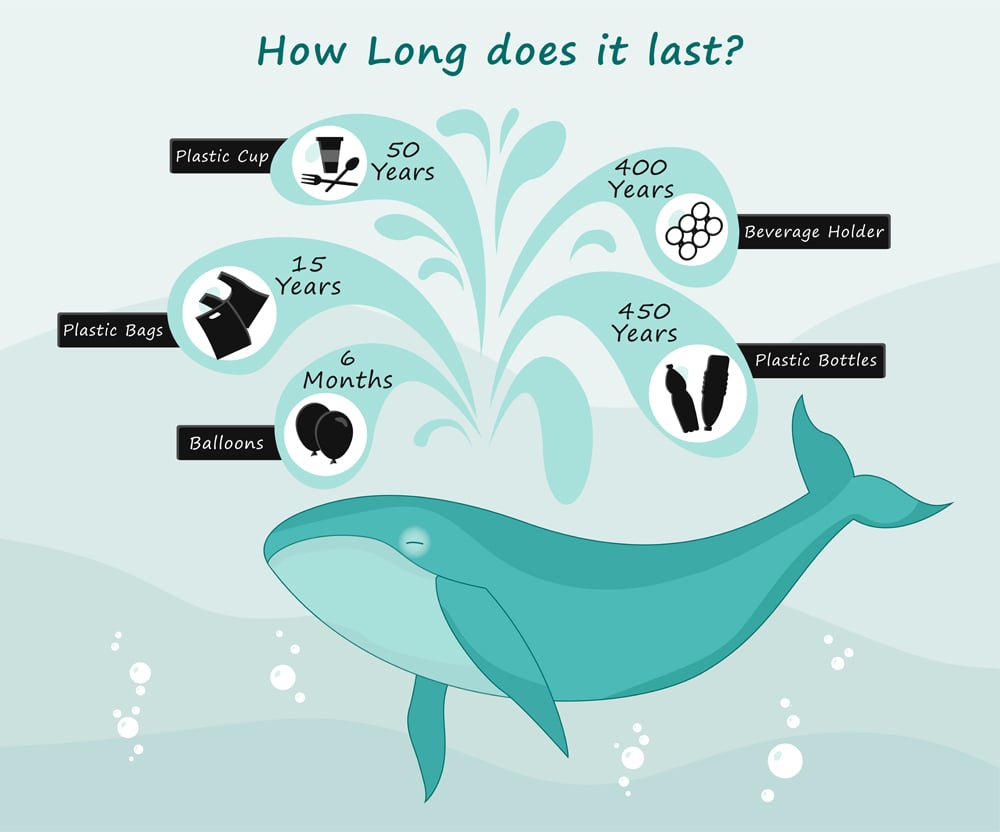 Even though plastic can be gradually broken down by sunlight, the plastic is still never destroyed, and changes into other forms that can affect the environment in new and more subtly dangerous ways. To give an example of some common plastic items, even when exposed to sunlight and degrading at a high rate, a plastic grocery bag will take 10-100 years, a toothbrush will take over 500 years, sandwich bags could last for up to 1,000 years, a cigarette butt could take a decade and a diaper could stick around for 250 years. Unfortunately, when any of these objects end up buried in a landfill, unable to catch even a ray of sunlight, they will never decompose, and will remain in place and unchanged indefinitely. 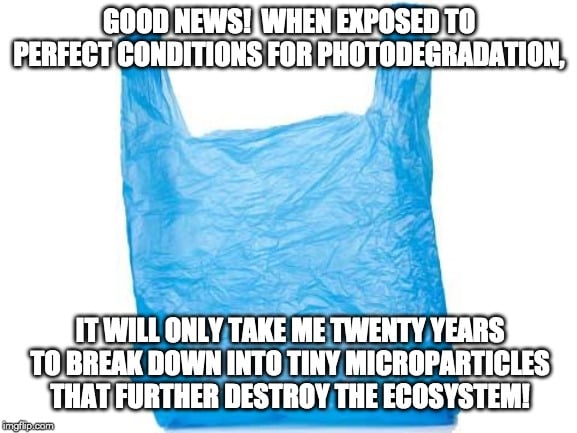 Again, these estimates are only guesses, and must be extrapolated based on the rate of photo-degrading that has been observed in closed settings. The point is, humans are producing over 300 million tons of plastic every year, and roughly 10 million tons makes its way into the oceans every single year. Considering the fact that every molecule of plastic that we have ever produced is still on this planet in some form, this is clearly a crisis.

The only way forward is to drastically limit our plastic use, particularly single-use plastics, thereby lowering plastic demand and forcing companies into more eco-friendly substitutes for such previously demanded products. Increased diligence in recycling and the widespread establishment of recycling programs is also required.

As mentioned at the top of this article, the management, treatment and storage of waste and plastic is only one element of our environmental crisis, but it is a critical one. The proper handling of plastics to reduce microplastics in the ocean, cutting down on fossil fuel use in plastic production, and eliminating our single-use plastic behaviors are all essential if we are to limit the negative impacts caused by plastic’s inability to decompose! If we don’t change our global behaviors–and fast—we won’t even be around to see the first plastic water bottle naturally photodegrade 500 years from now.