The seas are deeper than humans have yet traversed. Their apparently bottomless depth may seem like a good solution for the literal mountains of waste we’ve created on land. Some believe that the seas will simply wash away all the uncleanliness we’ve created.

In 2016, 2.01 billion tonnes of garbage was generated in the world’s cities alone. The surmounting problem of microplastic waste in our waters and the fertilizer and pesticide runoff is causing havoc while hiding in the shadows.

The scientists, environmental champions and the media worry about the seemingly infinite amount of plastic waste around us, but in that plastic paranoia, the world often forgets about another type of waste that is a major threat to public health and the future—food waste.
Food waste doesn’t appear to be that big of an issue, because food is biodegradable. It will decay as nature ordained it to, so what’s the problem? Well, the problem lies in the fact that a McDonald’s hamburger is not within the natural diet of a fish.

In her revolutionary book Silent Spring, Rachel Carson writes, “In nature, nothing exists alone”, commenting on the interdependency of all creatures in the natural world. This is particularly true when it comes to disposing of our food waste in the sea. 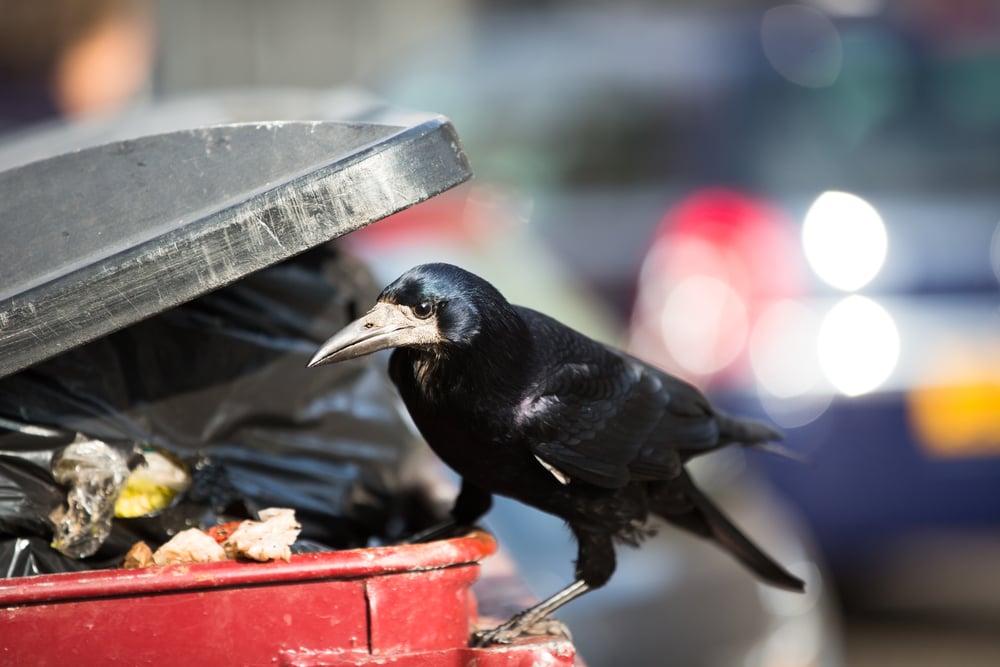 Food in our trash cans become a feast for city-dwelling animals. This not only makes them pests, but they also endanger other wildlife around. (Photo Credit : l i g h t p o e t/ Shutterstock)

The role of food waste in landfills affecting predation is subtle. A 2015 study noted that the predation pressure on steelhead trout by gulls had increased.
Predation pressure is the pressure that predators put on the prey population. When the predator population is high, this puts a strain on the prey population. Basically, the greater the number of predators, the more they will feed on prey, causing prey populations to decline.
Because of the abundant food supply at landfills, the gull population has increased. Even though gulls rely more on food waste than trout, the increased population also meant an increase in predation.
Populations of steelhead trout in Monterey Bay have been on the decline caused by fishing and a limited number of breeding sites. As a result of declining trout populations, the gulls began to prey on trout juveniles. This forms a cycle where fewer prey are able to be produced, even as predator numbers increase.
This isn’t an isolated incident. Ravens and coyotes subsidized by food scraps in the Mojave Desert jeopardize the population of desert turtles. Food waste-subsidized yellow-legged gulls in the western Mediterranean threaten the populations of many other seabirds.
The obvious solution is to decrease food waste, especially fishery waste thrown into the seas. However, that might not be viable in every case. An estimated 52% of seabirds are dependent on scraps from fisheries. Cutting off this supply of food might result in some ‘unintended consequences’, e.g., predatory seabirds might start preying on other birds. 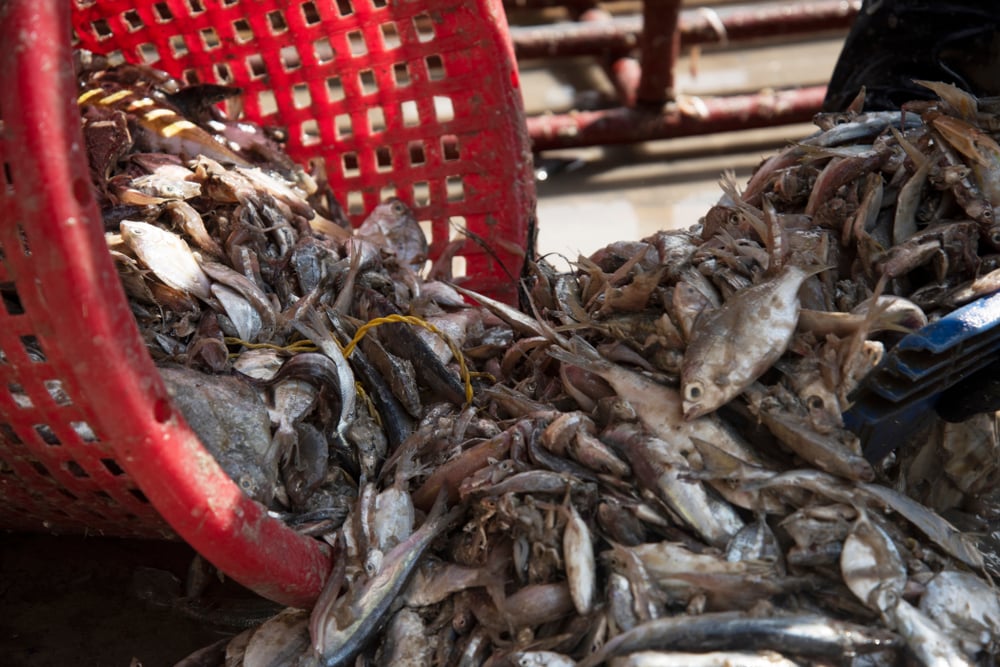 Fishing bycatch that ends up as waste. Bycatch can endanger many populations of marine animals. (Photo Credit : Improvise8survive/ Shutterstock)

Waste generated by the seafood industry amounts to 7 million tons per year. Most of this waste generated is bycatch. Bycatch is the term for non-targeted fish that are caught or killed while fishing. Bycatch is a form of waste that can lead to declining populations and downstream effects in a marine ecosystem.

Food waste can cause bioaccumulation of pesticides

What food reaches the Earth’s water bodies matters as much as the amount of food that reaches it. Throwing food into the sea might not seem like a massive problem, but it is. Food does not persist as plastic does, and fish can consume a wide variety of foods, but the food that humans eat isn’t how nature packaged and prepared it. We warp food identity by cooking it and processing it in various ways.
Our food, which is often treated with pesticides or insecticides (fruits and veggies), and hormones and antibiotics (meat) has shown to cause elevated toxicity in marine life. Pesticides have also been shown to bioaccumulate.
Bioaccumulation is the accumulation of certain chemicals in an organism. It occurs when the organism cannot break down the chemical or expel it by excretion. There is also a concern regarding pathogens that might be in our meat entering the marine ecosystem. 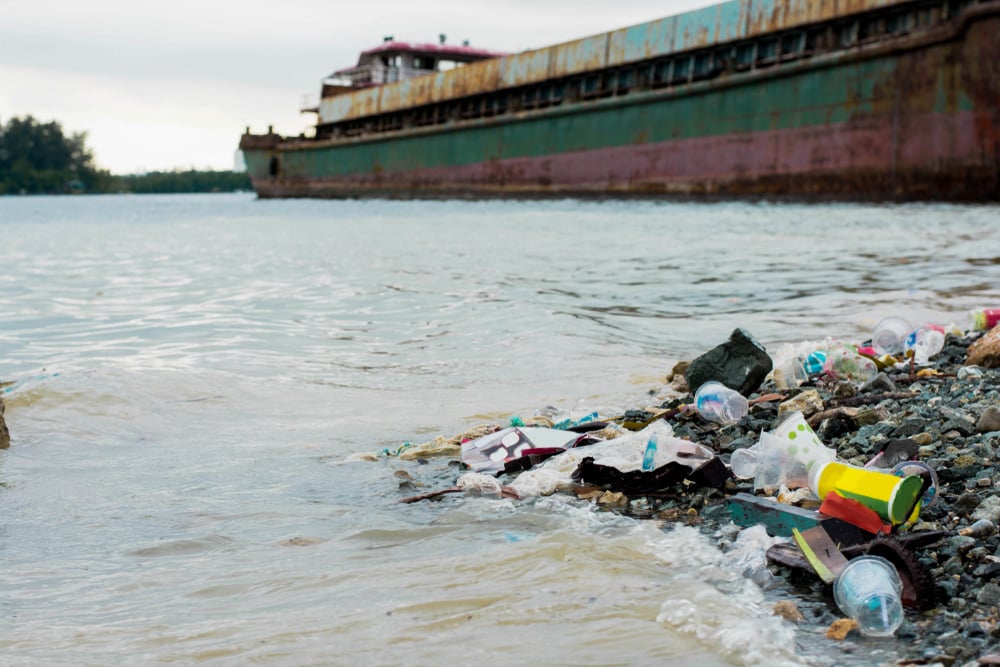 Ships have very strict guidelines when it comes to disposing of waste. Plastics and anything with toxic chemicals in it are banned. (Photo Credit : SVRSLYIMAGE/ Shutterstock)

The MARPOL has strict guidelines for garbage disposal on ships. These regulate the type and method that the food should be disposed of by. The food waste that ships are allowed to dispose of should be ground to a small enough size and adequately cleaned before disposal. Careless food waste disposal could lead to diseases in marine wildlife and damage to the ecosystem.

Food waste can cause eutrophication

Besides the effects that food waste has on larger forms of wildlife, smaller microorganisms are also affected by added nutrition in the seas. Eutrophication is the process where a high nutrient concentration in water bodies causes algal blooms. These algal blooms deplete the oxygen and nutrient density where they appear. This makes the waters uninhabitable for other marine wildlife, killing fish and reducing diversity in those waters. 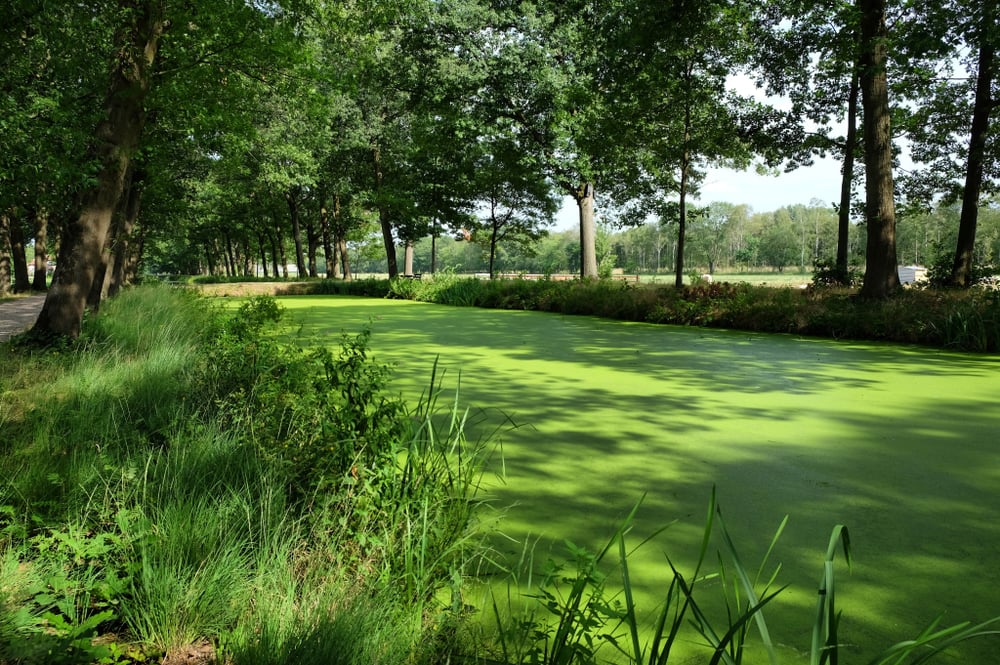 This is not a lawn of well-mowed grass. This is algal bloom in a canal in the Netherlands. (Photo Credit : Alexandra Glen/ Shutterstock)

Eutrophication might not be directly caused by food being thrown into the sea, but some food items can make eutrophication more intense. What this means is that some food might cause more nutrient runoff into water bodies during its production. For example, the production of dairy products and red meat results in a lot more nutrient runoff and loss into water bodies in comparison to cereal. Wasting foods that are eutrophication intense are indirectly unhealthy for the oceans.

Given that the population of the world is estimated to reach 11 billion by 2050, it’s inevitable that the amount of waste we generate will continue to increase. The World Bank estimates that humans will be generating a staggering 3.40 billion tonnes of waste by 2050. Considering that 1.3 billion tonnes of our current solid waste is food, it is imperative that we take action towards preventing food wastage. All that food waste will wreak havoc on life on Earth.
The marine ecosystem always seems to be in a precarious balancing act. Rising ocean temperatures, acidification, waste and overfishing are all distressing marine life in the present day. At the moment, this distress seems isolated to the ocean, but sooner than later, it will also affect life on land. We derive a great deal from the seas, including our food security. We need to stop wasting our precious food and avoid harming life on both land and sea.
References
Help us make this article better
Tags: Environment, Food, Food waste, Garbage disposal, Health, Predation, Waste
About the Author