The Great Pacific Garbage Patch is a massive vortex of plastic litter in the north central Pacific Ocean. It was formed as a result of massive plastic pollution in our oceans.

Everything about Earth is rather marvelous… how it functions, how it’s the only habitable planet we know of and how it sustains life! Also, the way it can bear the undue burden of humans is impressive and highly fortunate. However, there’s one thing about our planet that isn’t as “great” as it sounds. It has been formed as a result of the polluting activities of humans, meaning that it is very unnatural. It is a black eye on the face of our planet, and a sign of our abusive treatment of Earth… the Great Pacific Garbage Patch. 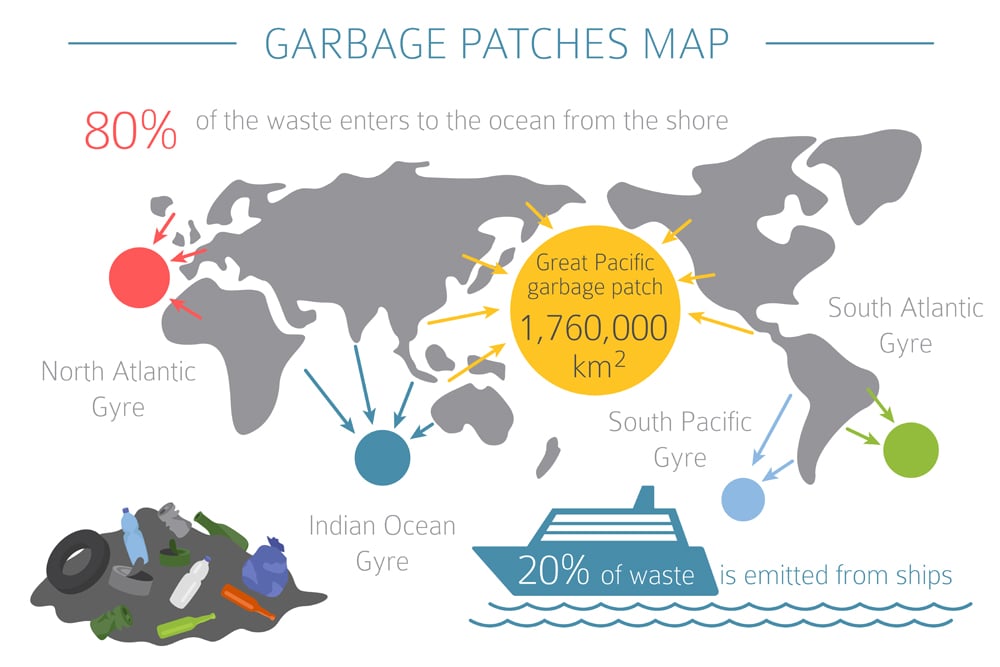 The Great Pacific Garbage Patch is an enormous gyre located in the north-central Pacific Ocean. It is also known as the Pacific Trash Vortex. Interestingly enough, 46% of the total mass of the trash found in this region is composed of discarded fishing gear!

The most straightforward reason for the formation of this patch is the constant stream of marine debris that has accumulated in this region over time. According to The Ocean Cleanup, this trash vortex is the most massive accumulation of ocean plastic in the world!

What Are Ocean Gyres?

Have you ever wondered how ships sail in the sea or how goods are transferred to far-off lands over the waves? Well, it’s all because of ocean currents. Wind, tides, and differences in the temperature of the water in oceans drive these ocean currents. 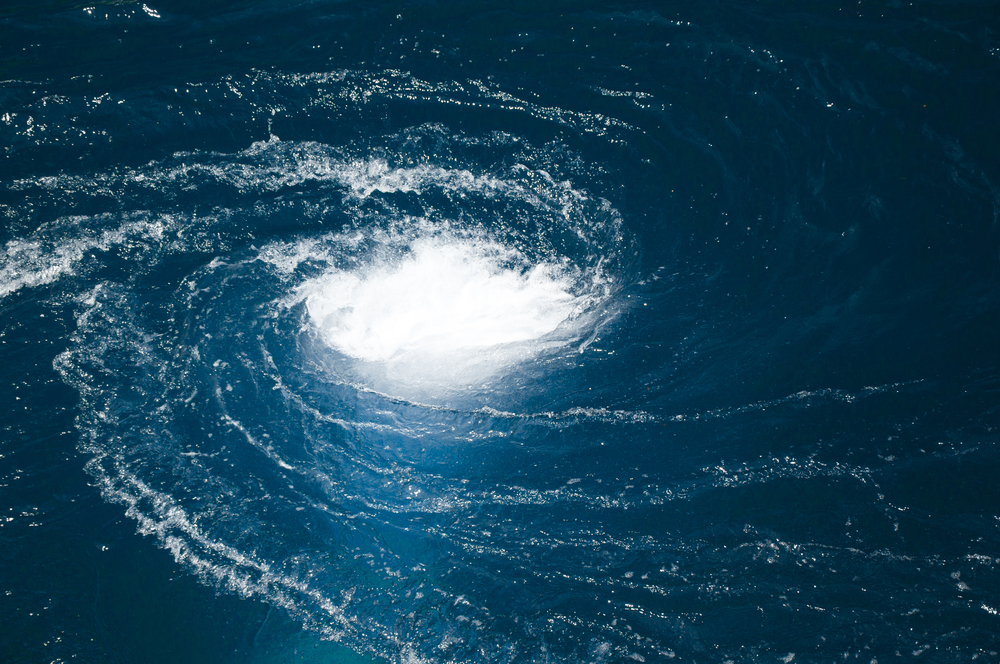 Gyres are spiraling circulations in the sea that can have a diameter of thousands of miles. They are known to be rimmed by large and permanent ocean currents, which form a bulge of rotating water a few meters above sea level.

A gyre can also be another name for a swirling vortex. These swirling vortices dominate open oceans. The gyres in the Northern Hemisphere rotate clockwise, while the ones in the Southern Hemisphere rotate counterclockwise. This is because of the Coriolis Force that the Earth experiences due to its rotation. The significant gyres include the North Atlantic, South Atlantic, North Pacific, South Pacific, and the Indian Ocean gyres; of these, the North Pacific gyre is home to about three million tons of plastic litter.

Also Read: Why Can’t We Burn Garbage In A Closed Environment That Doesn’t Let Fumes Escape?

What Is The Great Pacific Garbage Patch?

Plastic pollution is perhaps the most significant threat that the oceans face today. Apart from the normal trash that people leave near beaches and other water bodies, countries also deposit the bulk of this plastic waste into the oceans by ship. Once they reach the center of the oceans, the ships dump it there like a landfill. A great deal of this litter flows from one part of the world to the other through ocean currents.

The Great Pacific Garbage Patch was formed through the gradual accumulation of marine pollution in the North Pacific Gyre. This area, however, consists of two regions of plastic litter, namely the eastern and the western patches. The eastern patch is located roughly between Hawaii and San Francisco, while the western Patch lies southeast of Japan.

It is critical to understand that a majority of the garbage found in these gyres comes from land-based sources. The plastics that we use and casually throw away in massive amounts is non-biodegradable, which means that it can’t be degraded or broken down into harmless organic substances. It can only be photo-degraded by the energy of the sun, which breaks it down into microplastics; unfortunately, these microplastics continue to be a significant threat to the existence of marine life and the health of the ocean. 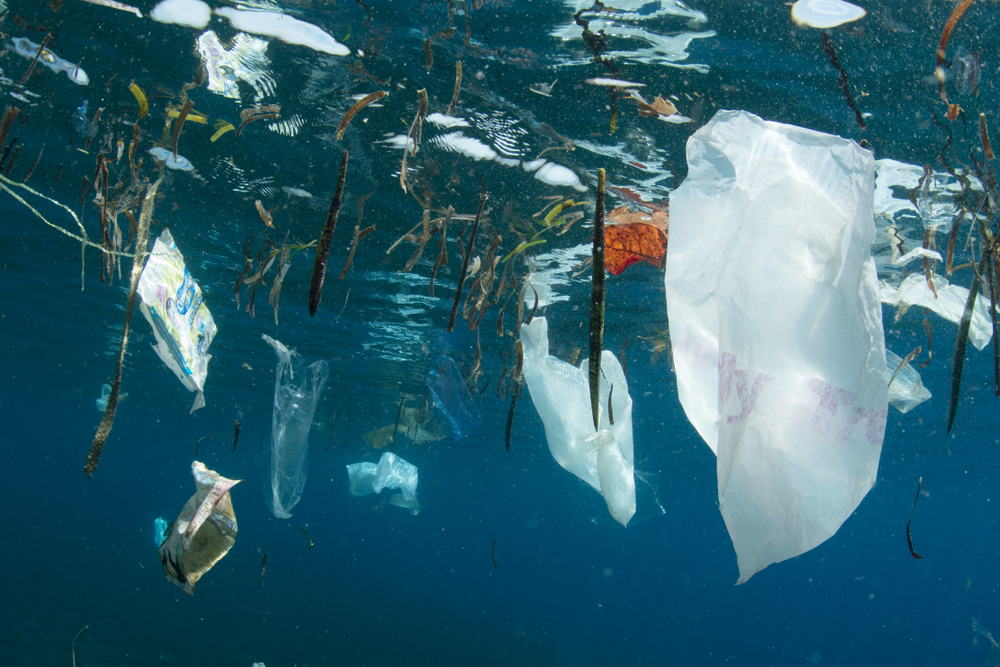 How Big Is The Great Pacific Garbage Patch?

This giant plastic dump was initially assumed to be a floating island of plastic waste about the size of Texas, but according to tests and research conducted by The Ocean Cleanup, it has become clear that the patch is not in one particular place. It is divided into eastern and western patches that rotate through the action of oceanic currents. However, the plastic litter found in these regions covers an area about three times the size of France.

While that’s a scary estimate, what is even more frightening is that we can’t analyze what lies beneath these patches. Unfortunately, there is a huge quantity of microplastics, less than 5mm in size, suspended throughout the entire column of water in this region. While the fishing nets, plastic yogurt containers, and toothbrushes can be counted, microplastics cannot be accurately quantified. Basically, even if we calculate the amount of visible plastics, the actual amount will always be greater due to the ubiquitous presence of photo-degraded microplastics.

What Is The Impact Of Plastic Litter In The Oceans?

Not only does plastic litter contribute to pollution, but it also has severe impacts on humans and wildlife. Due to its bright colors and irregular shapes and sizes, marine animals often mistake these plastic bits for food. This eventually causes malnutrition and poses a risk of entanglement for these creatures. Since the plastic contains a lot of toxic chemicals in its composition, it can indirectly enter the body of these animals, leading to their death and an increased risk of extinction for certain marine species. 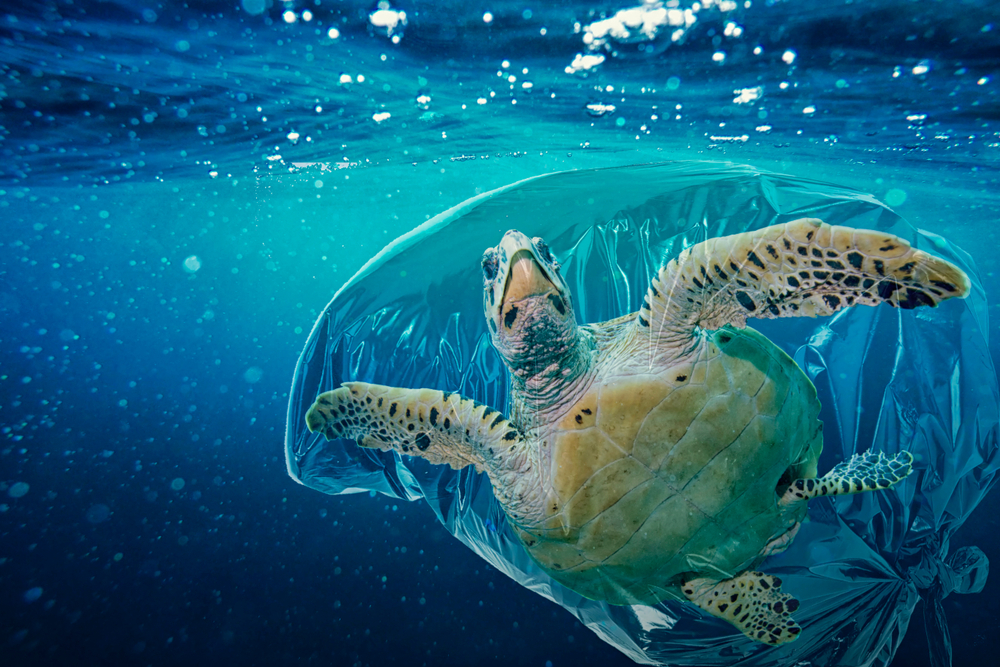 Also Read: How Does Our Food Waste Affect The Seas?

This plastic can then enter the body of humans through a process called bioaccumulation, because humans rely on seafood for their protein requirements. Therefore, once this plastic enters the body of a marine animal, it can effortlessly enter our own systems, following the food chain all the way to the top!

Studies suggest that the Great Pacific Garbage Patch has 250 pieces of plastic for every human residing on Earth. However, we must never forget that the amount of plastic floating in our oceans increases every day, as we continue to rely on our favorite necessary evil and alternatives have yet to become viable, widespread or subsidized to prevent further damage to the only home we have! 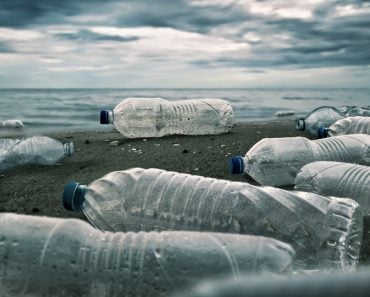