Glow-in-the-dark mushrooms are common enough in nature. The way they generate their eerie greenish-yellow hues is through a series of chemical reactions. This phenomenon is called bioluminescence.

As kids, many of us place glow-in-the-dark plastic stars on our bedroom ceiling. We also like giving mundane objects like paints and clothes a twist by adding a glow-in-the-dark element to them. However, we aren’t the species that came up with the idea of making things glow in the dark. Nature has been doing this for ages with a wide variety of animals.

Coming across a glow-in-the-dark mushroom might seem like a scene from a fantasy world, but in reality, there are quite a few mushrooms that can emit visible light! 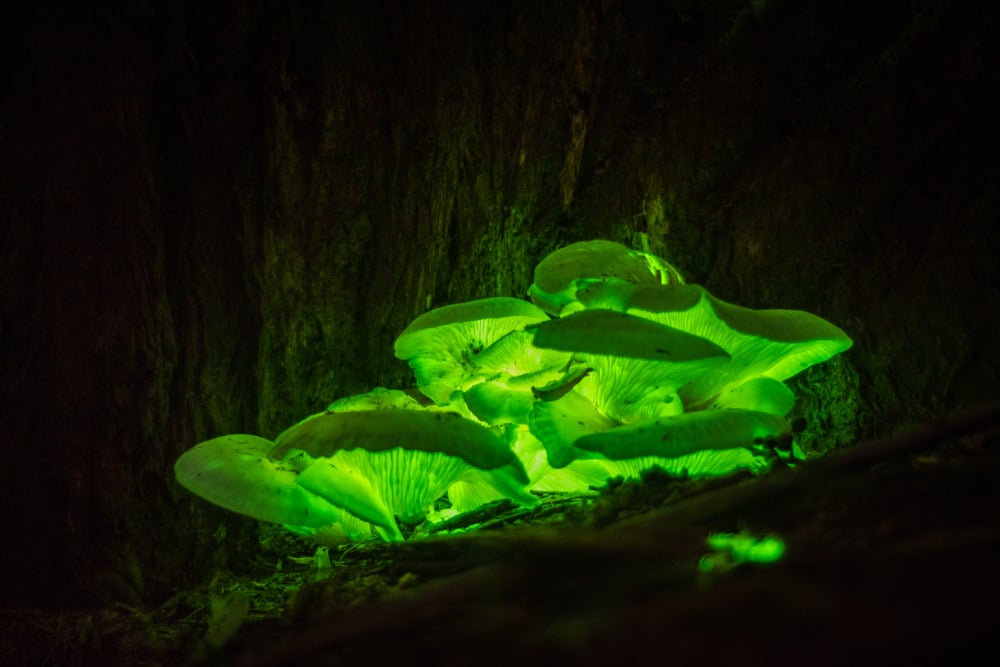 Reports of bioluminescent mushrooms were first recorded thousands of years ago. Aristotle described the mysterious glow on a piece of rotting wood due to luminescent mycelium as “cold fire”. In the 17th century, a Dutch physician noted how Indonesian natives used a mushroom with bluish light as flashlights when traveling at night.

In Micronesia, the natives wear these luminous mushrooms as head ornaments for ritual dances. They would also smear it on their faces to scare people off. In other cultures, people considered glowing fungi a bad omen and would destroy them (Source)!

What Are Glowing Mushrooms?

Out of the over 100,000 known mushroom species, scientists have identified over 80 species of luminescent mushrooms. A vast majority of these mushrooms belong to Omphalotus, Armillaria or Mycena lineage. 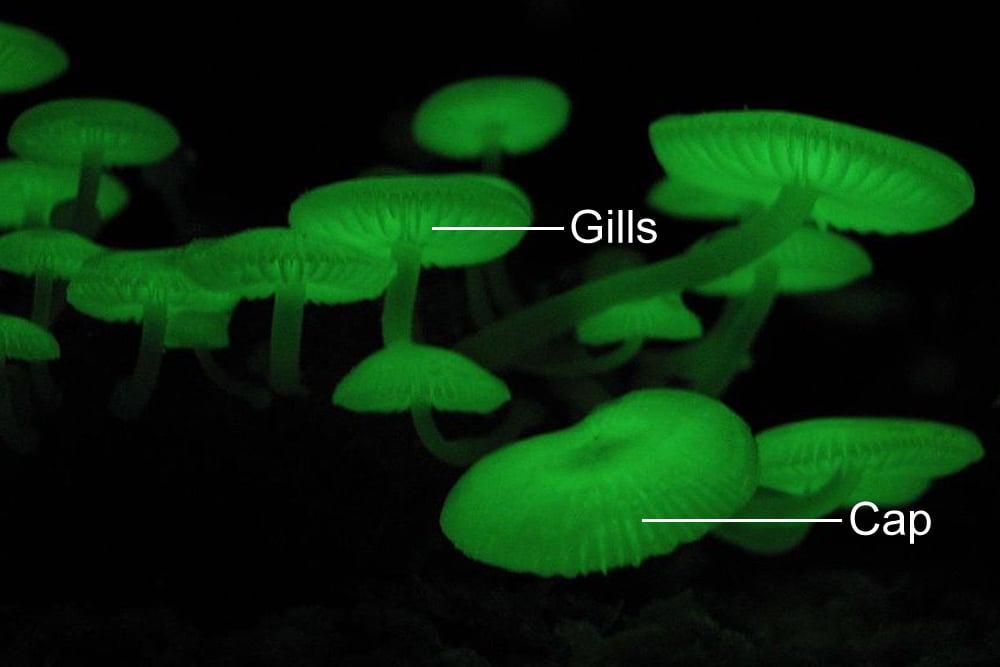 One would think that these mushrooms shine throughout their life, but that’s not the case. They emit light only for a certain period of their life cycle. For the remaining part of its life, the mushroom does not emit any glow.

Why Do They Glow?

The reason behind the glowing nature of some mushrooms is bioluminescence. This is a phenomenon wherein a chemical reaction causes an organism to produce and emit light. The energy produced during the reaction converts into light.

Fireflies, scorpions and marine animals like jellyfish and anglerfish exhibit bioluminescence by a similar mechanism.

Also Read: Why Do Some Beaches Glow At Night?

What Causes Bioluminescence In Mushrooms?

In mushrooms, the bioluminescence reaction is oxygen-dependent. It involves a reaction between a luciferin molecule and the enzyme luciferase.

Luciferin is a general term for an organic compound in luminescent organisms. It emits light by oxidation in the presence of the luciferase enzyme. The type of luciferin involved in bioluminescent mushrooms was unknown until recently. A study identified the luciferin as 3-hydroxyhispidin. The compound is biosynthesized by the oxidation of a fungal metabolite called Hispidin.

The bioluminescent reaction occurs in two stages. First, the luciferin molecule interacts with oxygen and ATP molecules in the presence of the enzyme luciferase. This leads to the formation of a luminescent molecule called oxyluciferin, which is a combination of luciferin and oxygen. 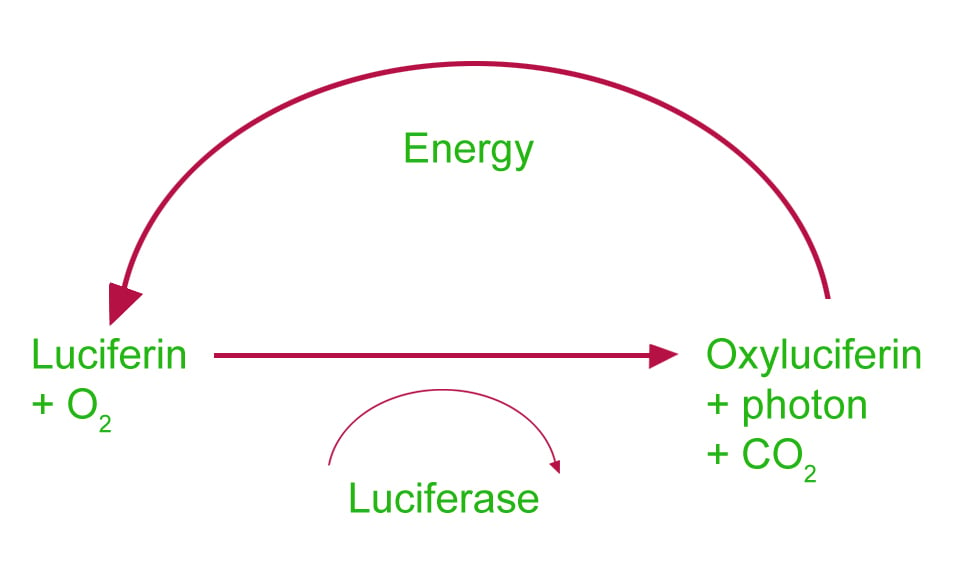 Most light sources, such as light bulbs, emit light because they get really hot. Mushrooms, on the other hand, produce light without heating up, as it is simply a product of the chemical reaction. Hence, the light radiated by bioluminescent mushrooms is called a ‘cold light’.

Role Of Bioluminescence In Mushrooms

Various theories try to explain the function of bioluminescence in mushrooms. An experiment conducted by Sivinski demonstrates how arthropods like Collembola and Diptera are attracted to light-emitting fungi. These bugs can aid in spore dispersal that increases the survival of the fungal species.

Thus, species of fungi that emit light at night have an advantage over non-luminous species of mushrooms in attracting spore-dispersing insects. This is especially true for mushrooms under the dense canopy of a forest, where spore dispersal by wind is rare.

Contrary to what some may believe, the glow of the mushrooms does not necessarily signify danger. Some light-emitting mushrooms, such as Pleurotus japonicus, are poisonous, and Omphalotus olearius is considered a toxic hallucinogen. However, not all luminous mushrooms are toxic and inedible. The Panellus stipticus mushroom works as a bitter, acidic laxative.

The luminous mycelia may also repel negatively phototropic predators (arthropods that move away from light) found in soil. Conversely, the light appeals to carnivores that are drawn towards light. These carnivores may eat the arthropods on fungi and thereby limit the presence of predators.

Another hypothesis suggests that bioluminescence has no ecological function in a mushroom. Rather, it is simply the byproduct of some other biochemical reaction. Most wood-decaying mushrooms exhibit visible luminescence and can digest lignin. This is a complex polymer that provides rigidity to the plant cell wall by binding the cellulose network in the plant. There is a relation between bioluminescence and lignin degradation. The fungal bioluminescence reaction detoxifies peroxides released during lignin digestion, in a process known as ligninolysis.

Also Read: Illuminating The Life Of A Firefly: How And Why Does A Firefly Glow?

In ancient times, light and fire were associated with Gods, such as the Greek god Apollo. Yet, the appearance of light without heat or fire (such as the cold light from luminous mushrooms) was considered to have supernatural significance. (Source)

That said, after studying various luminous species of fungi, we now know that a chemical process of bioluminescence causes this mysterious emission of light!