The number of eyes on spiders varies from zero to eight. While most spider species have 8 eyes, some spiders like Sinopoda Scurion have no eyes at all!

Arachnophobia, the fear of arachnids—particularly spiders—is one of the most common animal phobias. In fact, research states that almost 3.5% to 6% of the global population fears spiders. However, what makes these multi-legged crawling creatures so scary?
Is it the fact that they appear and disappear almost instantly? They could be there one second and  vanish in the blink of an eye. Poof! Or is it just the way the movies depict spiders? Who doesn’t remember Aragog’s sons & daughters trying to make a meal out of Ron and Harry? Or perhaps it’s the number of beady eyes staring back at you? Speaking of eyes… how many eyes are there to worry about? 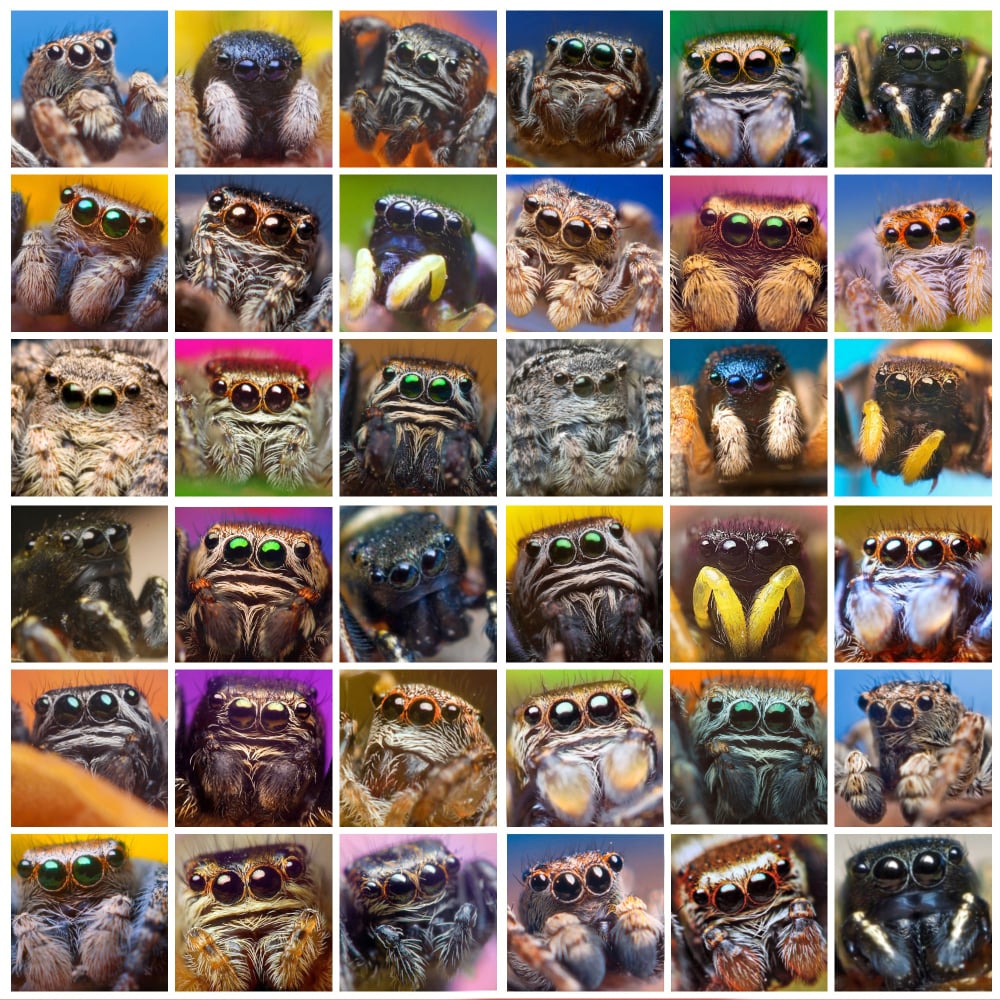 How many eyes do spiders have?

The simple answer to this question is that it depends/varies. There are over 40,000 various species of web-weaving creatures found on the planet, with more being discovered every passing day. With such great numbers comes great variety. The number of eyes on spiders varies depending on their family and species. The number of eyes and their arrangement on a spider is also often used for classification purposes.

Most people assume the answer to the question lies between two and eight eyes. Spiders can have two eyes, like most other creatures, or a grand total of eight eyes. In fact, most spiders have 8 eyes. However, spider species in the family of Caponiidae have only 2 eyes, which is an unusual occurrence among spiders. What’s even more unusual is that the Caponiidae spiders have the ability to grow an additional number of eyes as they mature. 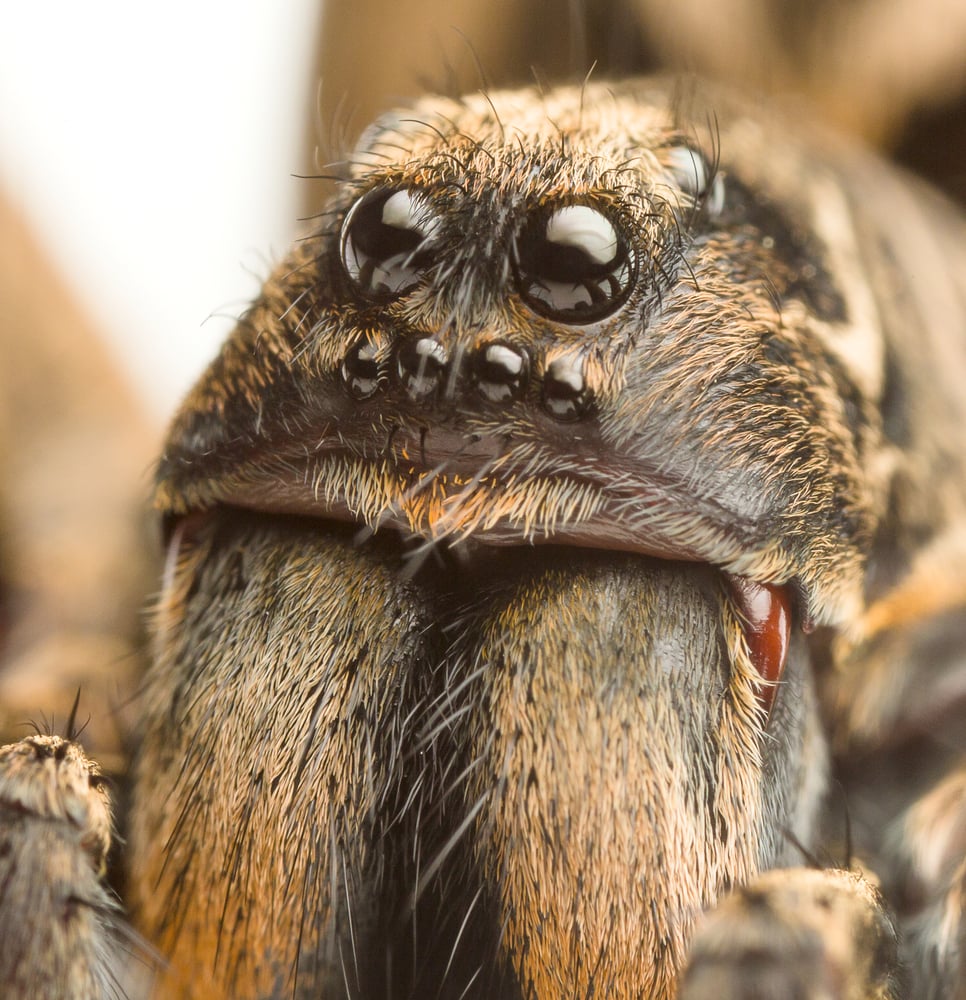 Most spider species have eight eyes, but in different arrangements. Some have a single pair of large primary eyes in the front with three pairs of secondary eyes along the side of the head. Others have very specific and unique arrangements of eyes. (Photo Credit : Paul Looyen/ Shutterstock)

What you may not know is that the answer to the question may also be none. Yes, no eyes whatsoever. In 2012, Peter Jäger, a scientist from the Senckenberg Research Institute in Frankfurt discovered the first huntsman spider species with absolutely no eyes. The eyeless huntsman spider was found in a cave about 100 km from the Xe Bang Fai cave in Laos, South Asia. Jäger named the spider species ‘Sinopoda Scurion‘.

While most huntsman spiders have 8 eyes, the Sinopoda Scurion was found to have none. Scientists believe that the spider species ditched its eyes to adapt to the darkness inside the caves. Over the years, more spider species with no eyes have been discovered in different parts and caves of the world. Telemidae, Cicurina, and Kauaʻi cave wolf spider are all examples of eyeless spiders.

Eyes or no eyes, all spiders must have a different way of observing the world. Does having 8 eyes lend them an advantage over other animals? How do all 8 eyes work in unison?

How do the eyes of a spider work?

Spider eyes are split into two types: Primary Eyes and Secondary Eyes. The principal pair of eyes found at the front are the primary eyes, also referred to as Ocelli, while the smaller outer ones along the side of the head are secondary eyes. The secondary eyes are believed to be derived/evolved from compound eyes of spider ancestors, Chelicerata. However, they lack the separate facets that are often associated with compound eyes. 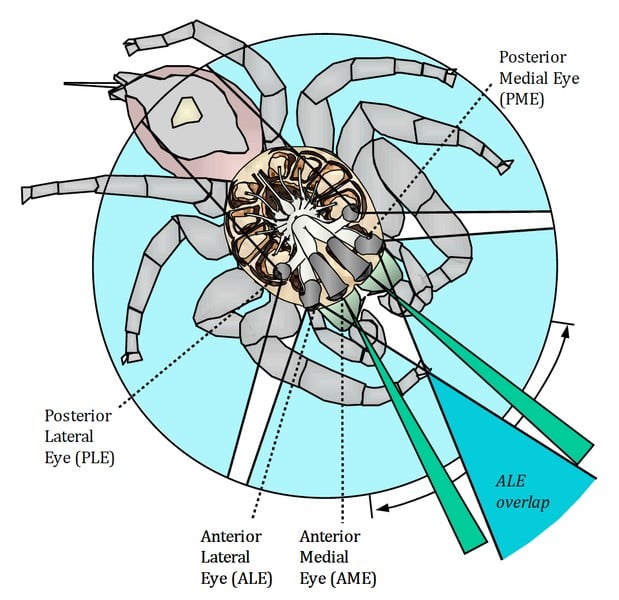 It makes sense to infer that a greater number of eyes would lead to better overall vision. However, that isn’t necessarily the case. 99% of those spiders with 4 pairs of eyes still have poor eyesight. Most spiders rely on their sense of smell and taste to hunt for food. Touch sensors in the form of hair-like or bristle-like structures called setae help them scan their environment. Setae are also responsible for helping spiders climb vertically and hang upside down. However, some hunting spiders like jumping spiders, wolf spiders and flower spiders have excellent eyesight.