Most spiders feed on insects, although some species feed on other spiders, small mammals, and reptiles. Some spiders are also able to liquify their food before ingesting it, and their digestive system is not designed to digest the cellulose of plants.

Spiders are part of a group called arachnids and are found in most places on Earth, except Antarctica. They have eight legs and two body parts: the cephalothorax and abdomen. There are thousands of spider species and their diet varies widely, largely dependent on their environment and size. For simplicity, we will generalize the diet of these species, but note that this generalization might not be fully accurate for all spider species. That being said, studies thus far on spiders have shown that the majority of species have similar dietary and digestive mechanisms with just a few variations based on the environments in which they live. 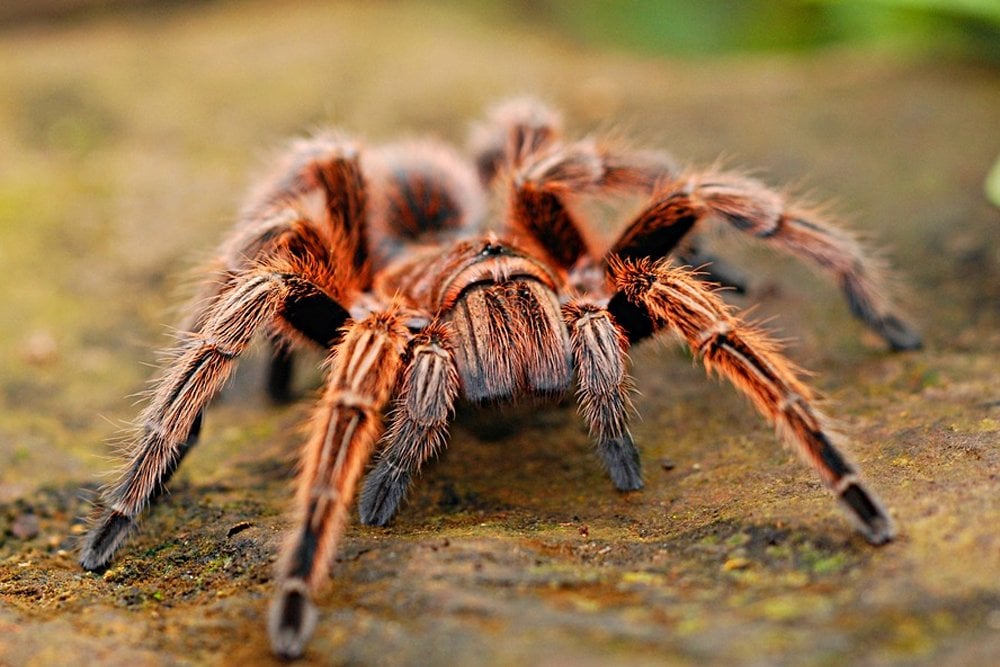 What Do Spiders Eat?

So, what do spiders like to eat? Thanks to Hollywood movies, many of us suffer from paranoia of getting bitten by a spider and dying some tragic death wrapped in a web. However, it’s important to note that humans are not a food source for these diminutive eight-legged creatures. With that being said, let’s now look into more detail about the preferred food choices of spiders. 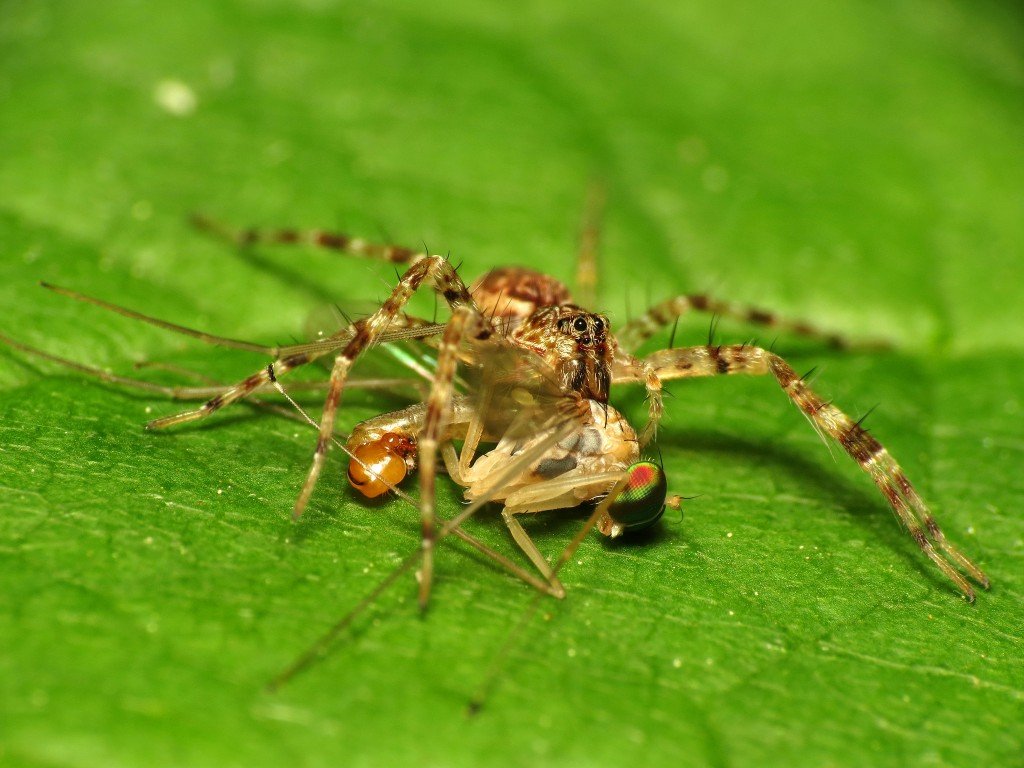 The diet of a spider depends on its type. Web-building spiders like to feed on insects like flies, moths, mosquitoes, etc. Hunting spiders are a more voracious variety of spiders. They camouflage themselves and attack their prey when it’s in their proximity. They eat grasshoppers, beetles, crickets etc. Some giant hunter species like the huntsman spider are reported to even feed on lizards and frogs. It must be noted that most spiders like to feed on live prey or prey that has been killed or died recently. Stale prey is a big turn-off for these diminutive arachnids!

Spiders don’t usually dine on plants and cannot eat solid food directly. They need to liquify their food before ingesting it, and their digestive system is not designed to digest the cellulose of plants. Recently, however, a spider species called Bagheera kiplingi was discovered in Central America whose primary food source is plant material! This plant-eating spider species dwell on the Acacia tree and feeds on the nectar the tree provides. The digestive system of these spiders can process sugar, proteins and even some fats, but whether or not they can digest cellulose remains a matter of further investigation and studies. 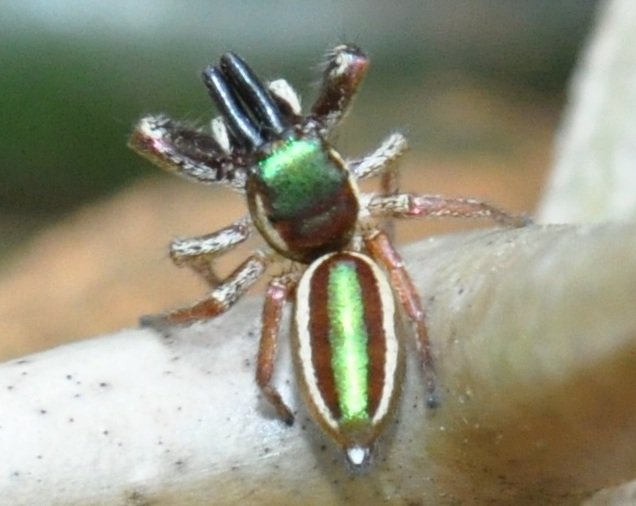 Some spiders can be described as ‘fussy eaters’, as they are very selective and only confine their diet to a particular type of prey. For example, Lampona, a white-tailed spider, only prefers to eat other spiders. They rarely go beyond foraging for insects other than spiders. Lampona are sometimes even successful in trapping elusive long-legged spiders like Pholcus. 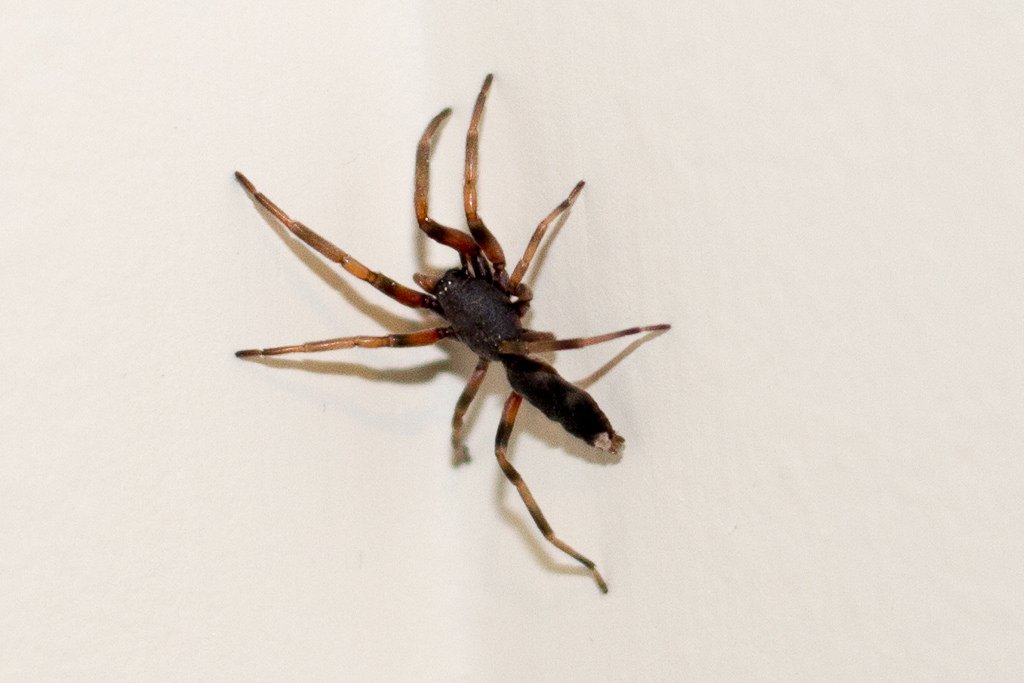 Also Read: What Do Ants Eat?

Interestingly, many spiders in the Myrmachne genus, such as the Kerengga spider, deceptively mimic ants and prefer to feed on them once the right opportunity presents itself. They have adapted themselves to look very similar to an ant, which often gives them access to the foraging ant’s stream without alarming the colony. Ordgarius magnificus, commonly called the magnificent spider in Australia, uses a different means of disguise to prey on ants. They suspend a fluid droplet containing a powerful pheromone attractant that draws insects like ants and moths toward the droplet. When the poor prey fall for this droplet trick, the magnificent spider attacks and eats them. 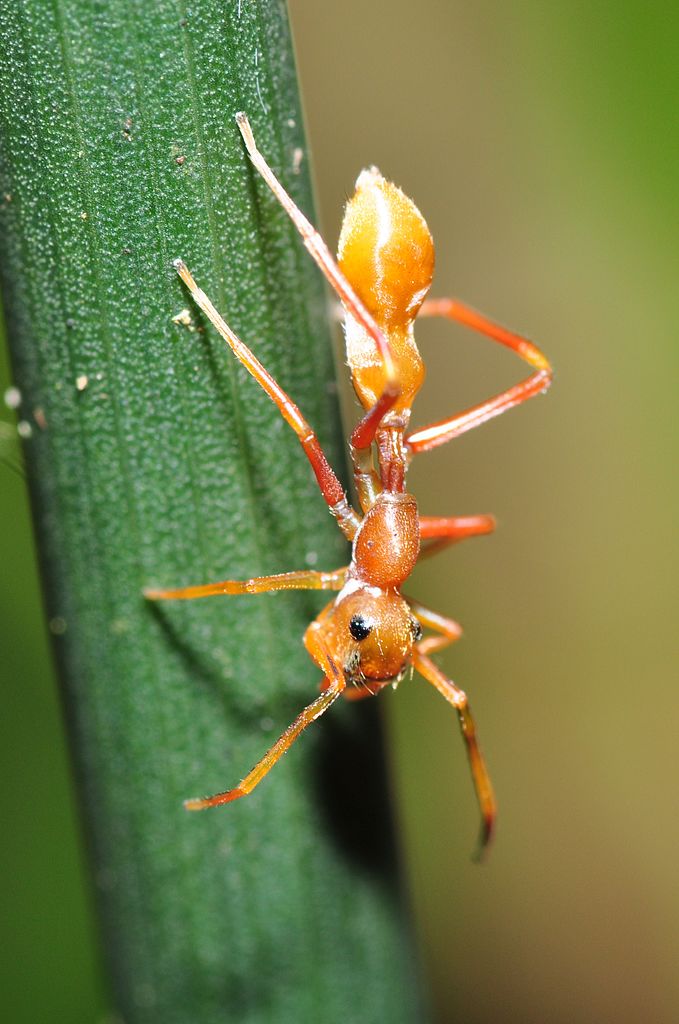 Although spiders are generally solitary creatures, if two disparate species move into close proximity, the more voracious of the two may cannibalize the other.

While female spiders do display usual maternal behavior towards their newly hatched spiderlings, it is not uncommon that a spider mother may also eat her newborns if there is an acute shortage of food. Not only mothers, but also siblings will eat their newborn kin in adverse circumstances.

What Do Spiders Drink?

We studied a great deal about what spiders eat, but what about their drinking needs? Well, spiders generally don’t need to drink water as frequently as humans do. Their water source is usually derived from their prey itself. Water is also produced as a byproduct of their metabolism.

Despite this conservative behavior in terms of water, some spiders do run the risk of desiccation; particularly those belonging to mygalomorph species. In fact, female mygalomorphs spend most of their lives in a burrow where humidity levels remain high. Adult male mygalomorphs come out of the burrow in the night when humidity is also high or in the day during the rainy season. Funnel-web spiders are so fond of moisture that they are often spotted near swimming pools or leaky garden taps.

How Often Do Spiders Eat?

The eating regime of spiders largely depends on the availability and type of prey in the vicinity. Unlike humans, spiders do not opt for a three-meal-a-day dietary routine! They are opportunistic feeders who prey on insects as soon as they come close to it. After gobbling in a good amount of prey, they might not need to look for more food for a few weeks. Thanks to their poikilothermic nature, they can manage to survive the temporary unavailability of food resources. However, a prolonged period of starvation, further worsened by unsuitable weather, may lead to the spider’s death.

Yes, but only to a small extent. Those who live through several cold months are effectively in a hibernation state, as they seem to survive without any food intake and limited internal fuel reserves.

Spiders are some of the most fascinating creatures in nature, so it’s not surprising that we have countless portrayals of spiders in popular culture. The dietary and eating patterns of spiders that we discussed are based on what has been observed and recorded through studies and research projects around the world. Even so, there is a very good possibility that there are some exotic spider species with eccentric eating habits that have yet to be discovered!

Test how well you know about spider’s diet