Mantises are classified as non-aggressive insects, and the vast majority of people who handle a mantis will never feel those mandible sink into their skin.

If you’ve ever done any gardening or forest-strolling, there’s a good chance that you’ve come across a praying mantis before. Hidden among the leaves and stems, these masters of disguise are some of the most striking and unique insects on the planet. Their unusual name is the result of their posture and the use of their front legs, but with their reputation as vicious hunters, some people who chance upon them in the wild end up saying a prayer of their own!

If creepy-crawly insects make you nervous, then the sight of a praying mantis slowly clambering up your shirt may be terrifying, leading you to ask the same question you ask every time you see a bug—do they bite??

The answer to that question is yes, but there is more to the story than that… as always.

As mentioned above, these insects are masters of disguise, but they can actually be found all over the world, as there are many different species that have adapted to varying environments, from the densest jungles to the driest deserts. 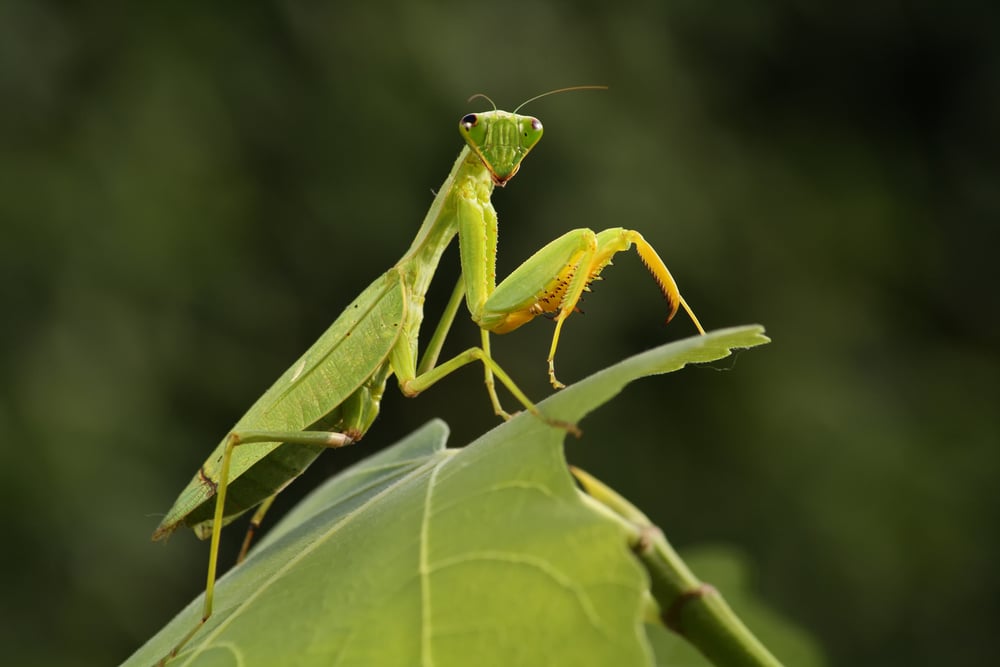 Typically ranging in color from brown or yellow to green, these insects are typically 2-6 inches in length, with three body parts (thorax, abdomen and head), like most insects.

These unique creatures have a rigid exoskeleton, six legs, two wings, two antennae, a triangle-shaped head and compound eyes that can contain hundreds of smaller eyes! One of the more interesting aspects of praying mantises is their ability to rotate their heads 180 degrees, something few other insects are capable of doing. This makes them extremely perceptive of their surroundings, thus adding to their hunting prowess.

Also Read: Why Do Orchid Mantises Look Like Orchids? 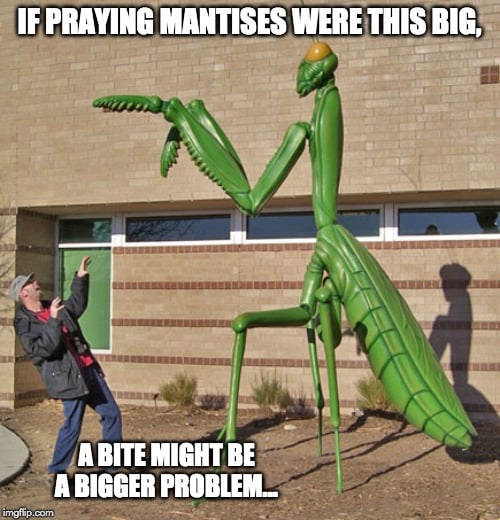 The front legs of a praying mantis are armed with barbed teeth, which can latch onto prey, making it difficult for them to escape as the praying mantis digs into dinner. Similar to a shark’s teeth being angled perfectly to lock on and hold prey, the front legs of a mantis are also deadly. They are called raptorial legs, and are used both for offense and defense. Their mouthparts also include a sharp mandible, so they can tear and rend the flesh of their prey, which includes other insects, small frogs and lizards, and even birds!

For such a small insect to have such an impressive dietary list of potential prey, it’s no wonder that people are worried about their bite. Furthermore, one of the most popular anecdotes about praying mantises is that the females will often bite off the head or legs of the males during the act of mating. While this typically only occurs in 30% of mating situations, it has given the praying mantis quite a fearsome reputation!

The Bite Of A Praying Mantis

Clearly, a praying mantis can bite its prey, but when it comes to humans, “common sense” seems to take over. In other words, a mantis is able to identify its typical food sources and preferred prey. Attacking something so much larger with provocation doesn’t make any logical sense, which is why bites are so rare. Mantises are therefore classified as non-aggressive insects, and the vast majority of people who handle a mantis will never feel those mandible sink into their skin.

However, since they are such fierce hunters and fighters, a praying mantis is more than capable of fighting back and defending itself if provoked. In such a case, the raptorial legs and the sharp mouthparts will come into play, despite the massive size differential. This “provocation” could come in many forms, either unintentionally cramping their space in a bush or branch, or even extending a finger out to lure the insect onto your hand. In the former case, you might receive a small bite, but these insects aren’t venomous, and in most cases, their mouthparts won’t even be able to break your skin. In the latter case, the insect may latch onto your finger with its spiny front legs, but they won’t be able to “latch on” very effectively, and the small barbs cause a minimal amount of pain. 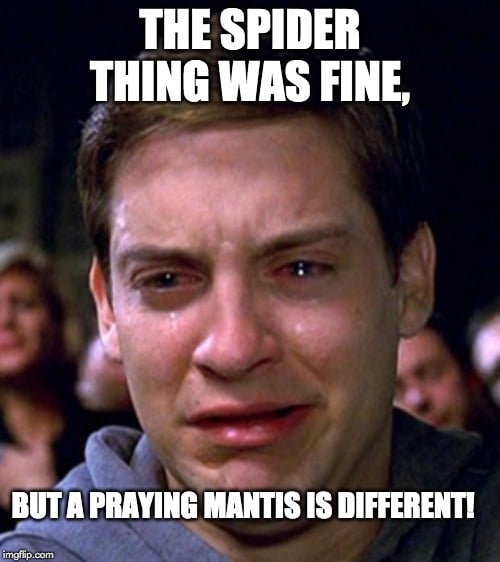 Even in the case of smaller pets, who may not have the good sense to avoid a moody praying mantis, a bite won’t do much harm, although it is possible that there could be some inflammation or indigestion if the leg-like barbs puncture your pet’s skin. In the case of a bite to yourself or a pet, you should simply wash the wound and sterilize it. There is no need to go to a doctor or make a big fuss, provided you have some modicum of a pain tolerance.

Considering that praying mantises are some of the most intriguing and oddly shaped insects around, there is a natural instinct in some people to interact with them, allowing them to go for a ride on your shirt, or even take them on as a pet! If you are deliberately engaging with a praying mantis on a regular basis, there is a decent chance of getting bitten once or twice, but generally speaking, these are non-aggressive insects who recognize and respect a much larger creature, and won’t attack unless they are provoked. In other words, stay out of their way, and they’ll stay out of yours!