A thermos flask or vacuum flask is a bit like a super-insulated jug. A typical thermos has an inner glass chamber and an outer plastic one. Between the inner and outer layers there is a vacuum. The outer material can also be made of metal, like stainless steel, for greater durability.

‘As a rule, man is a fool, when it’s cool he wants hot, when its hot he wants cool’! I have a faint recollection of this quote being on my calendar during my school days. Don’t you agree humans can be quite contrarian? When the winter is here, we long for warmth and do whatever we can to keep ourselves toasty. Then, when the summers come, we affix our eyes on air conditioners to shield ourselves from heat—the same heat that we embraced in the winter!

A thermos flask is one such invention that saves us in our contrarian needs. This is not exactly about keeping us warm/cold, but it does apply to our beloved beverages, e.g., coffee, tea, milk etc.

A thermos flask, also called a Dewar flask, is a special kind of bottle in which hot liquids like tea and coffee remain hot and cold items like ice or cold water remain cold for a long time. It is also popularly known by other names, such as a vacuum flask or simply a thermos. 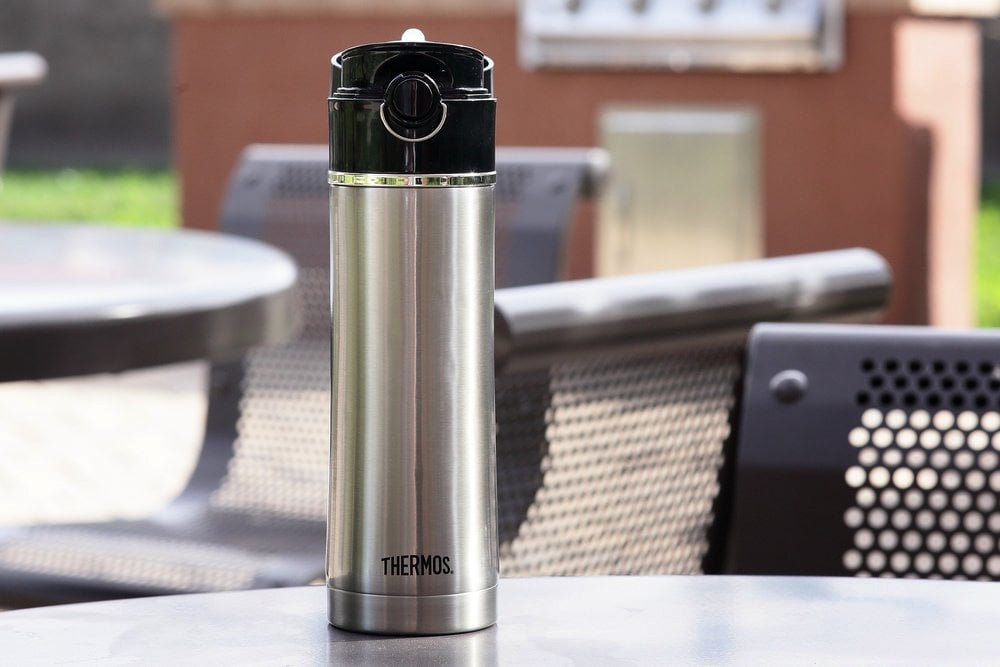 Controversial History Of The Dewar Flask

The thermos flask was originally invented by a Scottish Chemist, Sir James Dewar, in 1892. The story behind the invention of the vacuum flask is intriguing and a bit unfortunate.

In the early 1890s, Dewar built a machine that could manufacture industrial quantities of liquid oxygen. However, back then, there was no effective way to store it without losing the heat from the liquid. Normal liquids are kept in bottles, but bottles are not particularly good at thermal retention. This challenge intrigued Dewar, so he came up with the basic idea of putting a bottle within a bottle—and design the interior of the bottle such that it doesn’t touch anything in the external world. This arrangement would stop, or at least slow down, the heat transfer process through conduction. Creating a vacuum between the two bottles would deter heat flow through convection, and applying a reflective material to the interior bottle would deter heat from escaping through radiation. Basically, stopping heat from escaping through all three known methods would mean that hot liquid would remain hot. The Dewar flask was borne out of that idea and served the purpose of storing liquid oxygen in the desired thermal state. 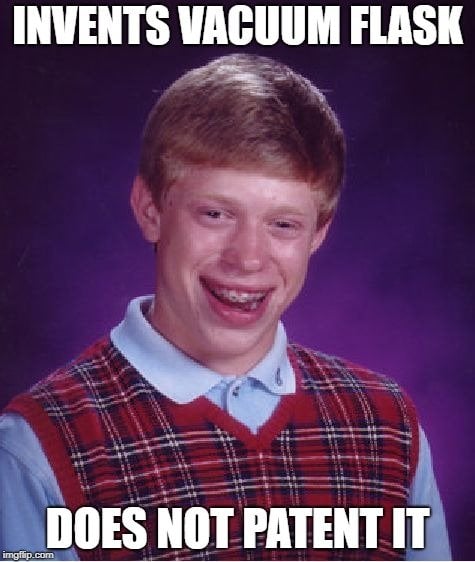 Unfortunately, the absent-minded professor (Dewar) did not consider the idea of patenting his invention! In a cruel twist of fate, the Dewar flask became the Thermos. Reinhold Burger suspected that the Dewar flask was a billion-dollar idea, so he formed a company, Thermos (hence called ‘Thermos’), that patented the design of Dewar’s flask for commercial use! Although Dewar later tried to sue Thermos, he lost in court, and the Dewar flask popularly became the ‘Thermos’.

Construction And Working Of A Thermos Flask

A thermos flask or vacuum flask is a bit like a super-insulated jug. A typical thermos has an inner glass chamber and an outer plastic one. The outer material can also be made of metal, like stainless steel, for greater durability of the flask. Between the inner and outer layers there is a vacuum. The inner glass casing is generally lined with a reflective metal layer. Finally, there’s a tight, screw-down stopper on the top of the flask. These basic features and their arrangement virtually eliminate all the heat transfer by either conduction, convection, or radiation.

Also Read: Why Does A Thermos Keep Things Cold Longer Than It Keeps Things Hot? 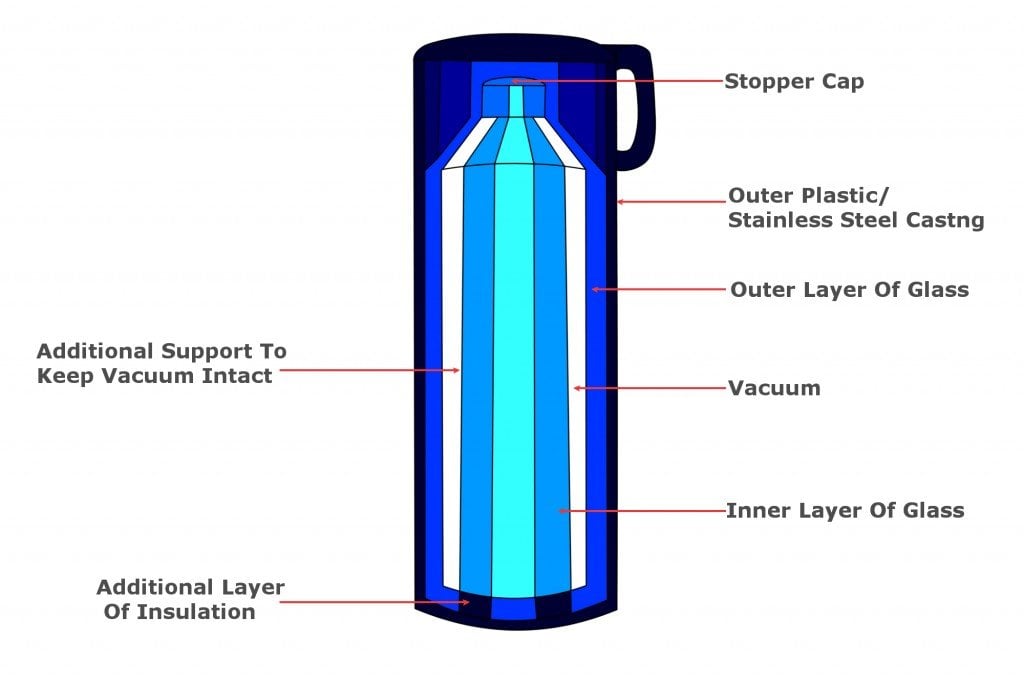 The internal construction of a thermos flask

Conduction, convection, and radiation are three modes in which heat propagates.

If you touch a hot item, heat flows straight into your body, because there’s a direct connection between you and the hot item. Touch or physical contact is the major base for heat flow through conduction.

Heat flow through convection, on the other hand, can occur without explicit touch or contact. To understand convection, consider the example of a fan heater. When you switch on a fan heater, it blows hot air through a grill into your room. This hot air is lighter (or less dense) than the cold air, so it rises. As the fan keeps blowing hot air, it starts to climb up and begins pushing cold air out of the way. Soon, this process becomes similar to a cycle, much like an invisible conveyor belt of warming, rising air and cool air being replaced by the warm air as it gradually heats up the room. The propagation of heat using a moving liquid (or even a gas) is called convection.

Heat dissipation through radiation is somewhat different from conduction and convection. When objects are really hot, they release light. Sound a bit weird? Don’t worry, think of a campfire to better understand this. On a campfire site, you not only experience the burning (heating) of wood, but also light. Campfires usually glow yellow, orange or even red. This happens because the atoms in the hot objects become ‘excited’. This ‘excited’ state implies that they are unstable and need to give away some energy, as they are inundated with ‘heat’ energy. Donating the excessive energy that atoms have when heated is a good way to bring them back to a ‘normal’ state from the excited one. These atoms give away energy in the form of light. This loss or conversion of heat to light is called radiation. 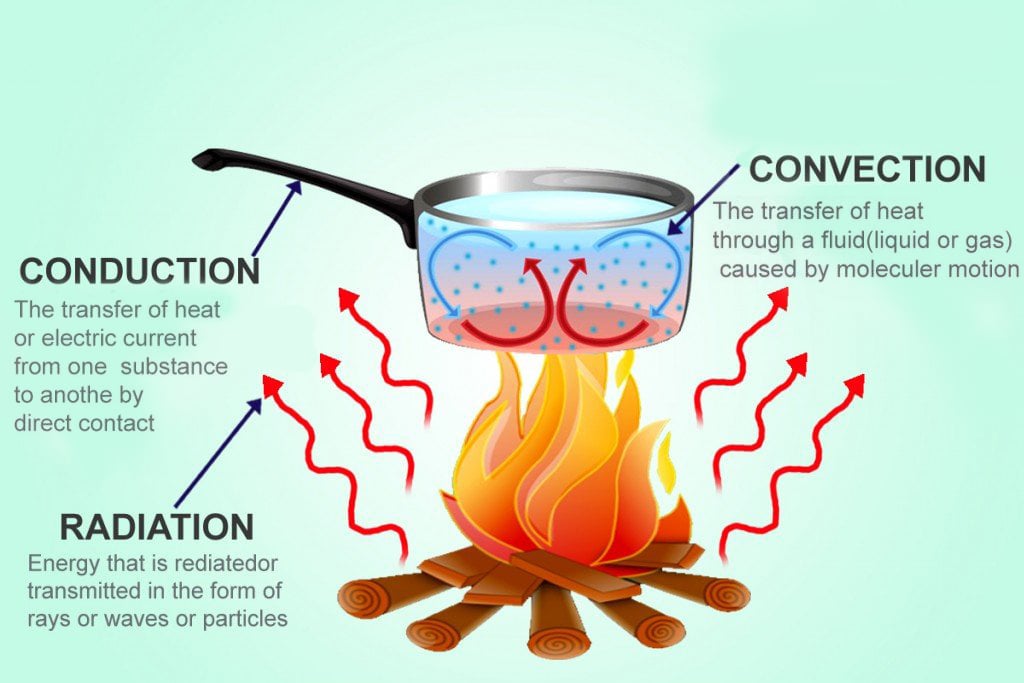 The three types of heat transfer.

How Thermos Flask Prevents Heat Leakage From The Container?

Now that you know about conduction, convection, and radiation, let’s get back to working of the thermos flask. Now, the main purpose of a thermos flask is to prevent the flow of heat to and from the flask. The inner chamber of the flask is made up of glass, which is a poor conductor of heat. Hence, heat does not flow by conduction. Since there is a vacuum between the inner and outer walls of the bottle, the flow of heat by convection becomes redundant. Finally, the silvering of the walls ensures that the heat is not lost by radiation. As a result, the liquid kept in a thermos flask continues to maintain its heat levels.

Also Read: To Keep A Cup Warm, Should You Hold It In Your Hands Or Put It On The Table? 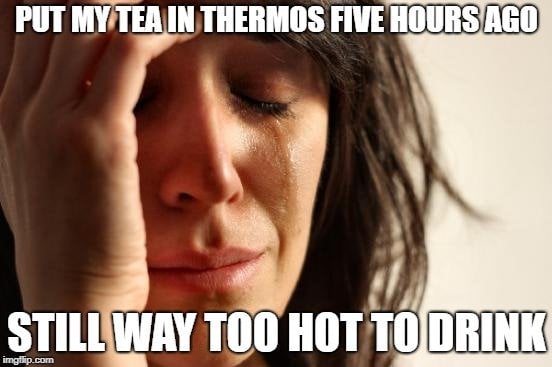