Aviation has come a long way since the Wright brothers took their first flight in the early 20th century. Airplane design was pretty basic back then and their glider-like plane could only carry a person or two. However, modern-day airplanes are gargantuan beasts, capable of carrying hundreds of people at super-fast speeds. 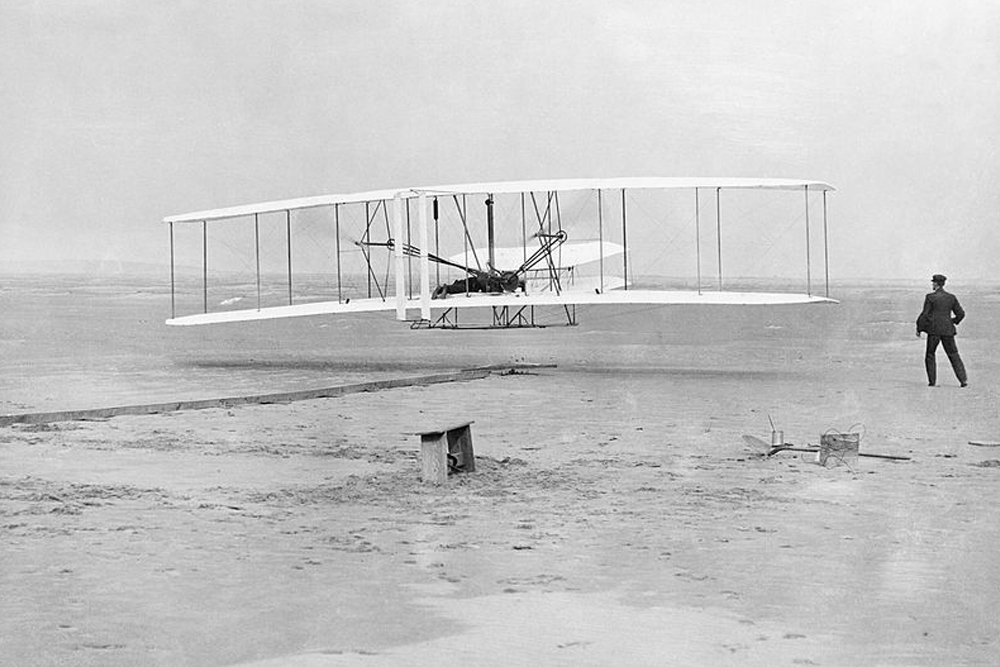 However, the present-day airline industry is also incredibly bad for the environment, accounting for roughly 3% of the global warming footprint. Considering the flourishing airline and tourism industry around the world, this number is projected to rise even higher. This is partially because people in rising economies like China and India are opting for airline travel to their vacation destinations, even if they are not too far from their home city. Thus, the carbon footprint of air travel is bound to grow to dangerous levels. Researchers and social activists in this domain keep warning us that we need to think about how we fly. Due to their efforts in creating awareness, even the multi-billion dollar airline industry is also feeling the pressure to reduce CO2 emission in order to mitigate climate change.

Bowing down to this pressure, they have begun to take some remedial steps. For example, older planes reaching retirement are promptly replaced with ones that are more fuel efficient. Similarly, artificial intelligence-based algorithms are being used to ensure that flights are being scheduled with minimum/negligible vacant seats.

Even so, it that enough? What more can be done? Should airplanes be redesigned, or could air traffic operations become more efficient and streamlined in some way? One of the leading ideas is to seek renewable sources of energy to power an aircraft. And in a utopian sense, a solar aircraft sounds like the perfect solution. So how viable is this solar plane dream? Well, let’s find out!

André Borschberg and Bertrand Piccard are two Swiss visionaries on a mission to bring a solar plane into reality. Solar Impulse was their first experimental solar-powered aircraft project intended for a long-range flight. They roped in the Swiss government and other corporations to finance their ambitious project. The Solar Impulse project kickstarted with the mission to complete the first circumnavigation flight around the globe in a solar-powered aircraft that solely uses clean-green solar energy as its fuel. To learn more about solar power, click here. 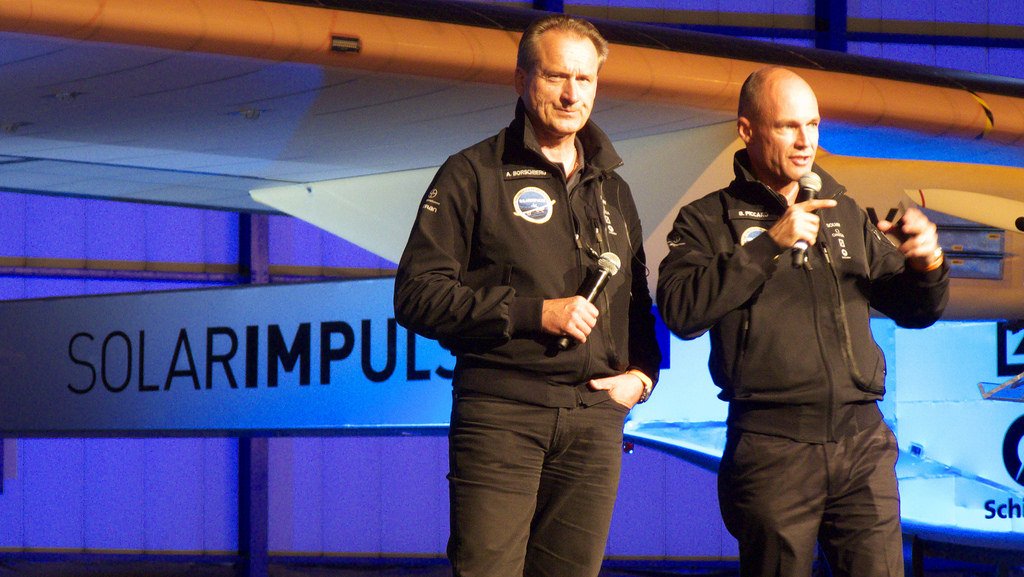 In 2010, an aircraft that goes by the same name – Solar Impulse – took to the sky for the first time. Although this wasn’t the first attempt to make a solar-powered plane, the project managed to achieve an unprecedented feat—a 26-hour flight solely using solar power. This included 9 hours of flying in the dark without any sunlight. 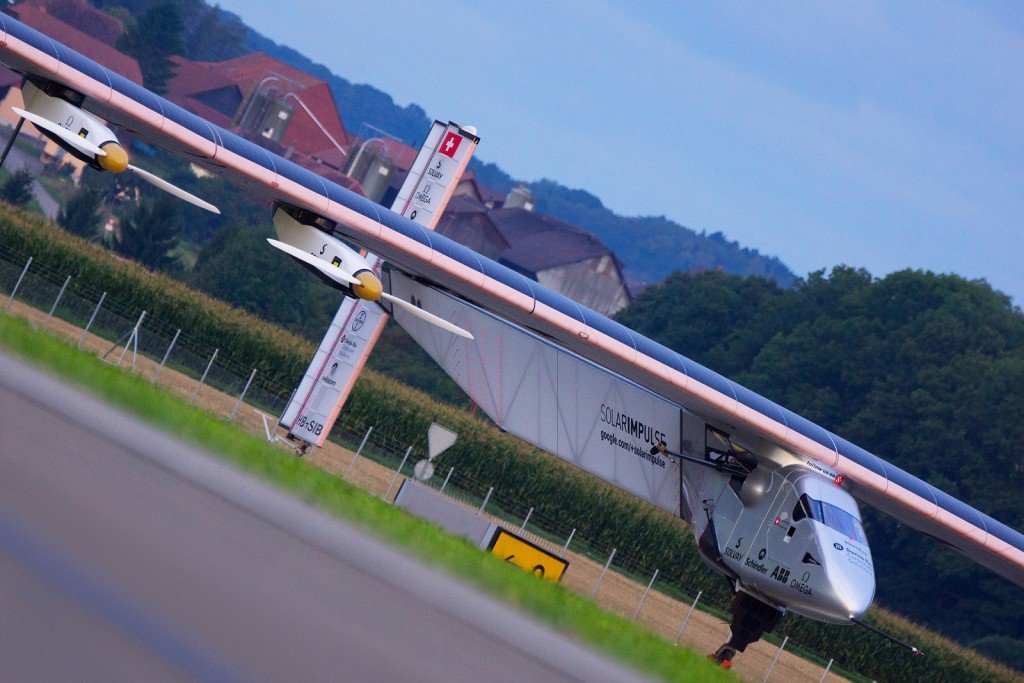 The Swiss duo didn’t stop here. They toiled hard with their team of engineers and other professionals to improve the design and working of the solar aircraft. Solar Impulse 2 was the sequel to the original Solar Impulse project and was destined to reach even greater heights. The Solar Impulse 2 aircraft, which took to the skies in 2015, covered a massive 43,000 kilometers at an average speed of 75 km/hour—all without using a single drop of conventional jet fuel.

In 2015, when Solar Impulse 2 soared through the air with a wingspan wider than a Boeing 747, it became the first solar airplane to complete an oceanic crossing, flying from Japan to Hawaii using nothing but solar power!

Construction of the Solar Impulse 2 aircraft

Just like domestic solar roof panels, the Solar Impulse 2 aircraft uses devices called photovoltaic cells or solar cells to generate electricity from sunlight. These cells are made of silicon and are very thin. Silicon is a semiconductor that conducts electricity in certain conditions, while acting as an insulator in certain other conditions. To learn more about those conditions, click here.

Now, when photons of sunlight hit a solar cell, it compels the electrons to move from one side of the silicon wafer to the other. This “flow of electrons” is what we popularly call ‘electricity’. Solar Impulse 2 has 17,000+ solar cells installed on its surface. The electricity these produce powers the aircraft’s motors, which turns the propellers and charges the onboard batteries. These batteries preserve the power required by the aircraft to fly at night. The aircraft uses 633 Kg of lithium polymer batteries, which account for roughly 25% of the aircraft’s weight.

In terms of motors, this aircraft has four electric motors, each delivering 17.5 horsepower. The Solar Impulse 2 aircraft uses clever composites, such as carbon fiber, in the plane’s airframe to ensure that it is lightweight. Making the plane lighter means that less energy is required to keep the aircraft flying.

Despite the breakthroughs made by solar-powered airplanes, there are still challenges that need to be overcome before they can be operated for commercial use.

The first challenge is the ability to carry hundreds of people. Keeping the airplane’s weight to a minimum is the basic design philosophy of a solar-powered aircraft. Carrying more people means more weight, meaning that it is infeasible for solar-powered airplanes to take off with that much load, as the present solar-powered design and technology is not equipped for that.

The second issue with solar-powered planes is their appallingly slow speed. Whereas a commercial-grade aircraft can cruise as a speed of 1000 km/hour, solar aircraft struggle by at around 100 km/hour. This implies that an 8-hour flight from London to New York would take more than 3 days to complete in a solar-powered craft. 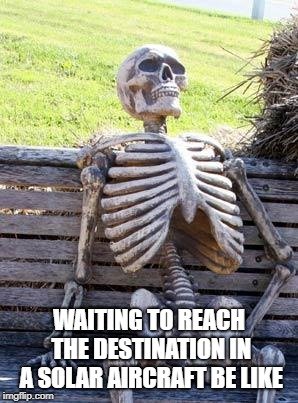 The third major challenge is that solar planes are extremely climatic. The best time for them to take off is understandably during the day – to efficiently use daylight hours and keep the battery full until dusk. Although weather is an important factor in the entire aviation industry, solar planes are extremely sensitive in this regard. Given their light weight and slow speed, it can be nearly impossible to control the aircraft in heavy winds or during particularly harsh weather. 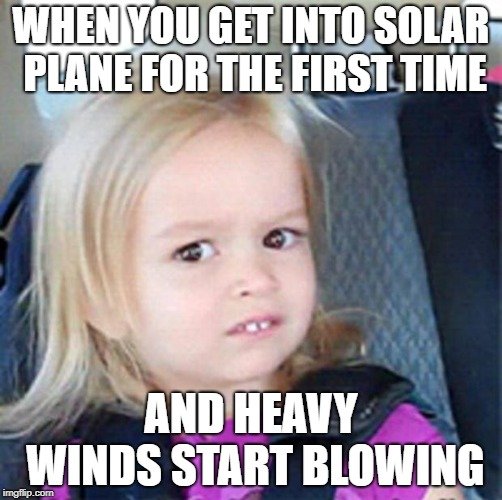 The fourth challenge relates to the pilot. The skillset required for flying a solar aircraft is much more extensive than the talent required to fly a normal plane. The pilot would first need to take off extremely carefully. Then, once the plane reaches an altitude of 8k-10k meters, the pilot would need to tactfully dodge dense cloud cover so that sunlight was not blocked.

Established airline companies aren’t very interested in solar-powered planes. Aviation is a capital-intensive industry and ensuring passenger safety can never be compromised, even for sensible or environmentally friendly reasons. Most aviation companies find solar-powered planes to presently be a risky proposal. Using a radically different airplane design would cost them billions of dollars, and if it goes wrong, those companies would be ruthlessly put out of business. Thus, solar planes – for now! – still need a lot of improvement in terms of carrying capacity, speed and safety when navigating seasonal variations.