The desert has an abundant supply of sunlight, which makes it an ideal place to build a solar power plant. However, these plants can have a negative impact on the environment.

The blaring signs of climate change have forced the world to look into green energy more intensely than ever. A source of energy that is not driven by fossil fuels and has negligible carbon emissions is essential for our long-term survival.

Let’s brainstorm some of the available options, shall we? 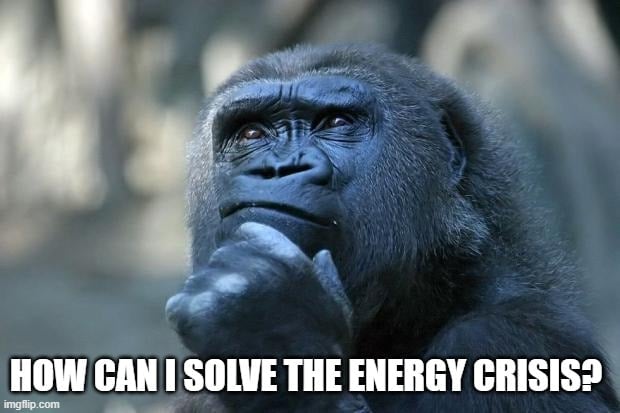 Nuclear energy can be the answer, as it has zero carbon emissions. Unfortunately, not all countries can afford nuclear plants, as they require tons of resources and pose a high risk of nuclear accidents.

So what about wind turbines? It is a sustainable and clean fuel source, but the turbines can be noisy and can be a risk to local avian life. Also, the wind isn’t a reliable source, as it doesn’t always blow.

Solar plants also have a similar problem. The sun doesn’t always shine brightly in the sky, and there are regions where sunlight is lambent or the sky is mostly cloudy. That said, there is the solution for that… Deserts! They are largely uninhabited lands with plentiful sunlight.

So why aren’t we covering deserts like the Sahara with solar panels? 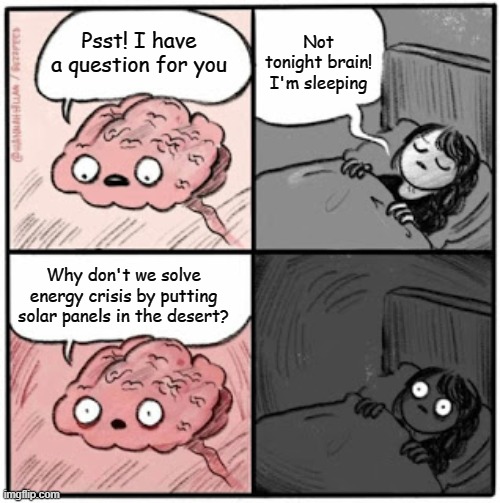 If the question keeps you awake at night, it’s a good thing you’re here.

Perks of Solar Plants in the Sahara

According to German physicist Gehrard Knies, in just six hours, deserts around the world receive more solar energy (173000 terawatts) than humans consume in a year. (Source)

The Sahara Desert in Africa is 9.2 million square kilometers in size, occupying 8% of the land mass on Earth. If 1.2% of the desert—around 110,000 square kilometers—is covered with solar panels, it would be enough to satisfy the entire world’s energy needs.

In addition to this, the desert has extremely low rainfall, little to no cloud cover, limited wildlife and negligible human populations. These attributes make the desert practically useless for any human interest. One man’s trash can be another man’s treasure, and in this case, the world’s treasure. This makes the Sahara desert our best bet for a clean and sustainable source of solar energy. So if that’s the case, is there anyone working on it?

Yes, there was. In 2009, the Desertec Foundation launched an initiative to power Europe with solar energy generated in deserts. However, soon after its establishment, the initiative began to fail due to problems related to its feasibility, transportation and cost. (Source)

Large-scale photovoltaic (PV) panels covering the Sahara desert might be the solution for our electrical requirements, but it could also cause more trouble for the environment.

An EC-Earth solar farm simulation study reveals the effect of the lower albedo of the desert on the local ecosystem. Albedo is the measure of the portion of solar energy reflected by the ground. It is measured on a scale of 0 (indicates a highly absorptive surface) to 1 (indicates a reflective surface). 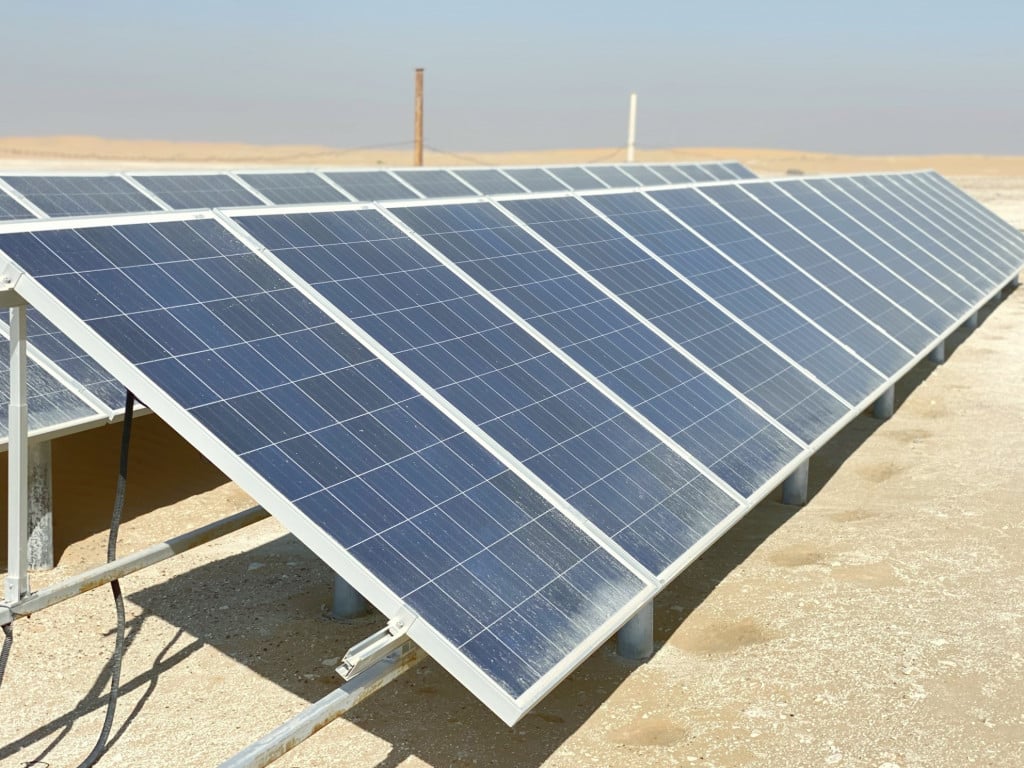 The study suggests that if the solar panels take up more than 20% of the total area of Sahara, it could trigger a vicious cycle of temperature rise. Forming a blanket of solar panels on the desert changes the albedo, as the photovoltaic cells absorb the solar radiation to generate energy. Thus, the PV solar panel has lower albedo as compared to the desert sand, which reflects sunlight.

However, solar panels do not entirely convert the incident sunlight into electricity. Rather, a portion of the solar energy converts into heat, which can alter the local temperature. Hot solar panels trigger high surface air temperature and the flow of convection currents, thereby causing precipitation. An increase in rainfall thereby promotes vegetation growth, which further reduces the albedo, as plants absorb sunlight better than sand.

As if turning the hot sandy ground of the Sahara into a rainy, green land wasn’t enough, solar panels could wreak havoc in other parts of the world too.

The simulation indicates an increase of ~1.5°C in the local surface air temperature in scenarios where 20% of terrestrial land is covered with solar panels. Likewise, there is an increase of ~2.5°C with 50% land coverage. Eventually, both scenarios can increase the global temperatures via the atmosphere and ocean currents. Greater signs of warming would be seen in the Arctic region in the second scenario. The warming of the polar region would cause a rise in sea levels due to the melting of sea ice. 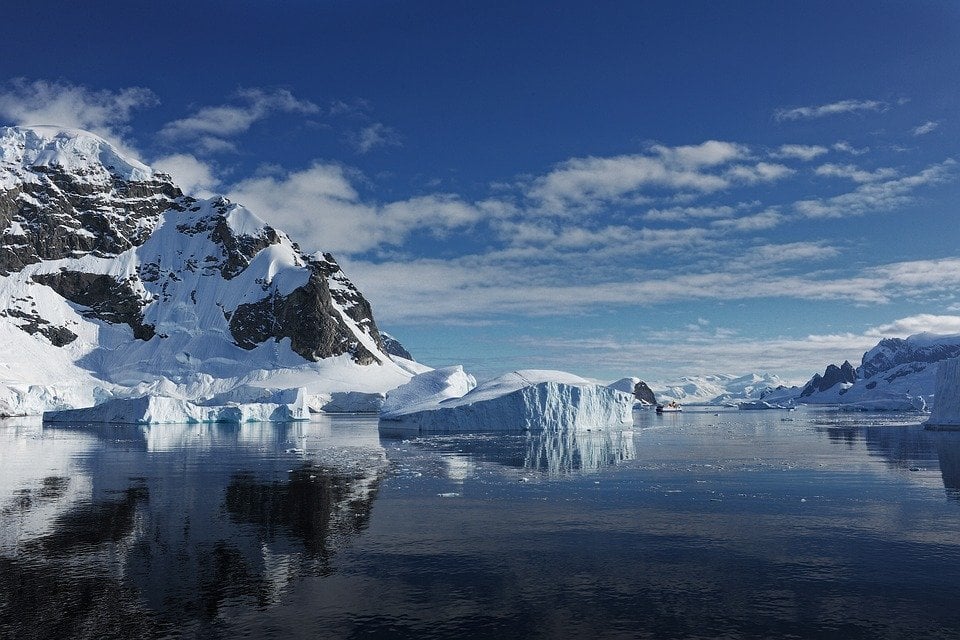 The redistribution of rainfall in the Sahara and nearby regions would reduce precipitation in the Amazon region by 10-30%. This is roughly the same amount of extra rainfall the Sahara would receive due to the lower albedo caused by PV solar panels. The reduction in moisture and precipitation would lead to drought-like conditions in the Amazon.

To put the final nail in the coffin, solar farms in the desert would promote the development of tropical cyclones over North America and the East Asian coasts.

Even if we overcame all the potentially catastrophic effects of desert solar farms, we would have to figure out the logistics to store and transport all this energy. We would require massive batteries to store the energy generated during the day to continue the power supply throughout the night. Each panel would need an individual battery for an uninterrupted power output throughout the day. This would nearly double the overall cost of the solar plant.

What about transportation? How would we supply the whole world with energy from a solar plant in the middle of a desert? Currently, Africa is running behind on the development of reliable electrical grids. Long-distance transportation of energy through power lines also comes with some percentage of power loss (up to 22.8%).

Additionally, the African region is politically unstable, making large investments (such as a solar farm) in the area risky.

Do we really need to take over acres of desert land and disturb the ecosystem to produce solar power? However exemplary the idea of harvesting large amounts of energy from desert solar plants might be, it’s still too complex to turn into reality, but we do have the technology to empower our towns and cities to generate their own solar energy.

That being said, if this concept does manifest into reality, it would be a great achievement for the world, as it would allow us to reduce our reliance on fossil fuels and move towards a more sustainable future.