Solar panels represent the future of energy. However, the maximum recorded efficiency of a commercial solar cell is 33% due to certain energy barriers at the molecular level.

“I’d put my money on the sun and solar energy. What a source of power! I hope we don’t have to wait until oil and coal run out before we tackle that.”- Thomas Edison

Everyone in the world should now firmly agree that renewable energy is the only way forward in terms of satisfying humanity’s appetite for energy. Greta Thunberg has tried to make this point on several occasions in front of the most powerful leaders of the most developed nations of this world. However, as we all saw, she was actually criticized by several world leaders, including American President Donald Trump, though calling him a “leader” feels like a stretch. The point is, the experts all know that Greta is right. However, when it comes to the various greener power alternatives mentioned by Greta, each one does have its own limitations. 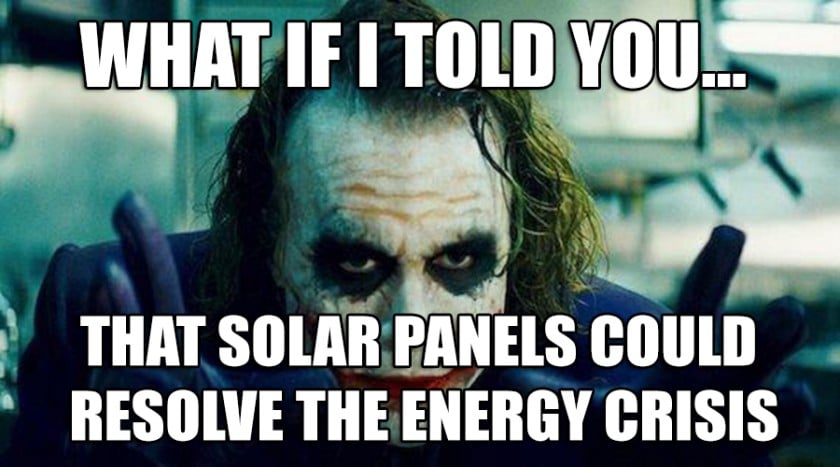 Wind velocity fluctuates tremendously, making it unreliable for much of the day. You can build dams, but you can’t power the entire world with them. Sunlight, however, is freely available during the day across the entire planet, so one might wonder… what’s the objection there? Well, the maximum efficiency of a commercially available solar cell recorded to date has been 33.7%. This has been one of the biggest challenges to the Solar industry, but why are there such limitations to the efficiency of a solar panel? We’ll get to that answer shortly, but first, it’s important for us to understand what exactly a solar cell is.

What is a solar cell?

A solar cell is a device that captures the energy of the sun in the form of direct sunlight and converts it into electrical energy. A solar cell is also known as a photovoltaic cell, which implies that it converts the photons present in the light into a voltage difference (which essentially means “electrical power”). To understand the limitations of a solar cell, we must take a closer look at its construction. Solar cells are made using p-type and n-type silicon wafers. A p-type silicon wafer consists of more holes, meaning that it lacks in electrons, whereas the n-type wafer possesses an excess of electrons. The interface at which these two make contact is known as a junction (a PN junction, to be more precise). The PN junction is the primary building block of the solar cell.

What do we mean by the efficiency of a solar cell?

Every device that we use has a certain efficiency associated with it. Consider a machine that produces 10 balloons per hour. Out of these ten, two balloons turn out to have a hole or some other type of defect. This implies that the efficiency of the machine is 80%, because the machine takes in the raw materials required to produce 10 balloons, but converts only 80% of that into useful output. Thus, the efficiency of a device represents the amount of useful output produced per unit of input supplied to it. Similarly, the incident radiation on a solar cell is not entirely converted into electricity. Only a certain fraction of that energy (a much smaller fraction, as we already saw) can be extracted as useful work. There are many different measures of the efficiency of a solar cell, but the most prevalent one is the Shockley-Queisser Limit.

What is the Shockley–Queisser Limit?

The Shockley-Queisser Limit, more commonly known as the SQ Limit, is the most prominent scientific measure for the efficiency of solar cells. It measures the theoretical efficiency of a single PN junction solar cell under standard test conditions (STC). The STC approximate solar noon at the spring and autumn equinoxes in the continental United States with the surface of the solar cell aimed directly at the sun (Solar Efficiency Limits).

The limit is measured under certain assumptions. The solar cell must be made of only one type of homogeneous material. There can be only one p-n junction per solar cell and it is assumed that every photon possessing energy greater than the bandgap will be converted into electrical energy. Don’t worry if you don’t know the meaning of photons or bandgap, we’ll be discussing those below.

Why is there a limit to the efficiency?

The process of generating electricity using solar cells depends primarily on one very important step. The jumping of electrons from a valence band (PN junction of a solar cell) to a conduction band (external circuit, such as a battery). For your reference, electrons in a normal atom with no externally supplied energy are said to be in their valence band. To produce electricity, these electrons must be transferred to an external circuit, which is referred to as the conduction band.

Electrons do not jump from the valence band to the conduction band by themselves. A certain amount of energy, known as the bandgap, must be provided in order for them to make the transition. Now, the incoming solar radiation is composed of waves of many different wavelengths, as shown in the spectrum above. The longer waves to the left are the weakest (possessing less energy), while the shorter waves to the right are more powerful. Thereby, only a few of these waves possess the necessary energy to overcome the energy barrier.

Let’s take a look at an example to get a better picture of the aforementioned process. Consider a packet of photons (particles of light) consisting of 100 waves of different wavelengths striking a solar cell made of silicon. Out of these 100 waves, 40 waves possess the energy equivalent of the bandgap of silicon, and will thus be able to produce electricity. The rest of the waves will either be dissipated as heat or will bounce back from the surface of the cell. Thus, there is a limit to the efficiency of a solar cell.

What are the other factors affecting efficiency?

As we saw, the threshold energy barrier for electronic transition turns out to be the primary reason for low solar panel efficiency. However, it is not the only factor affecting it. There are numerous other elements that play a considerable role here. The energy leaving the sun and the one that we receive here on earth is not the same. This is because radiation has to travel through the thick atmosphere that encompasses our planet. Now, different phenomena such as scattering and refraction of light reduce its intensity. The ozone layer blocks the harmful ultraviolet radiation from reaching us(these waves are harmful to us as they possess more energy and hence can damage the cells of our eyes). However, these are the waves capable of crossing the threshold energy and they reach the surface sparsely thereby again causing a reduction in the efficiency of solar panels.

Is there any solution to the problem?

Even though most commercial solar cells, currently available to us cannot cross the 33% bar in terms of conversion, the future does seem bright. Researchers working on perovskite materials for flexible LEDs and next-gen solar cells at the University of Cambridge have discovered that they can be more efficient when their chemical compositions are less ordered (something out of the scope of this article), vastly simplifying production processes and lowering cost-Physics.org.

Again, scientists around the world have been working on newer materials such as Gallium Nitride, Germanium, Indium phosphide, and others. Many believe that these materials will effectively use the complete solar spectrum to convert into electricity by changing the bandgap limits of multi-junction solar cells. All in all, the future does look bright for the solar industry.

The Australian and Amazon bushfires have released an incredible amount of carbon into the atmosphere, so much so that our planet might not be able to absorb it back until 2050. Global warming is no longer a future problem; it is a full-blown reality and there is no use denying it. Environmentalists have exhausted themselves telling the world that green energy is the only way forward, yet some leaders still balk at the truth.

The lower efficiency of solar cells has been commonly cited as the reason for not using them as substitutes for fossil fuels. However, the trouble is that multinationals and governments continue to put enormous sums into the research and development of petroleum and coal-based energy production, neglecting research and improvement to the greener and safer alternatives. For example, there have been discoveries of materials with a lower energy bandgap that can act as a possible remedy to the problem at hand, but we need the world to pay attention and invest in this type of research!

What the world needs to understand and accept is that there is only one way forward if we want our species to survive—the green and sustainable way!