Solar panels work by harnessing light emitted by the Sun and converting it into electricity. The light that the sun emits consists of tiny packets of energy known as photons. Solar panels are made of various semiconducting materials, and the most common semiconductor material is silicon. Doping is the intentional introduction of chemical impurities into the semiconductor, and when both these layers of p-type and n-type materials are combined, a p-n junction is formed between the two layers.

When it comes to renewable, clean and green energy, the first thing that often comes to mind is solar energy. Solar energy can be defined as the energy harnessed from the radiant light and heat of the Sun. Solar energy constitutes about 7% of all renewable energy. So how can the sun’s rays be harnessed in such an important way? To answer that question, let’s take a look at the inner workings of a solar panel.

Function Of A Solar Panel

A solar panel works by harnessing light emitted by the Sun. To be more precise, a solar panel harnesses the photons emitted from the Sun. Our Sun is an incredibly good fusion nuclear reactors, and starts by fusing Hydrogen into Helium. This process of fusion releases extreme amounts of energy in the form of heat and light. The light that the sun emits consists of tiny packets of energy known as photons. It takes about 8.5 minutes for these photons to travel from the Sun to the Earth, a distance of 149.6 million kilometers.

The flood of photons is converted into electricity within a solar panel by an effect known as the Photovoltaic Effect (PV). The photovoltaic effect was first discovered by Alexander Edmond Becquerel. At age 19, when experimenting with silver chloride in an acidic solution, he placed two platinum electrodes in the solution and observed that when light struck the electrode, voltage was produced between the electrodes. The photovoltaic and photoelectric effects are similar in their concept; basically, when exposed to light, a certain amount of voltage and current are present. The primary difference occurs in the use of terminology. The term “photoelectric effect” is usually used in applications where electrons need to be ejected, whereas “photovoltaic” is used to contain the excited charge within a given material. 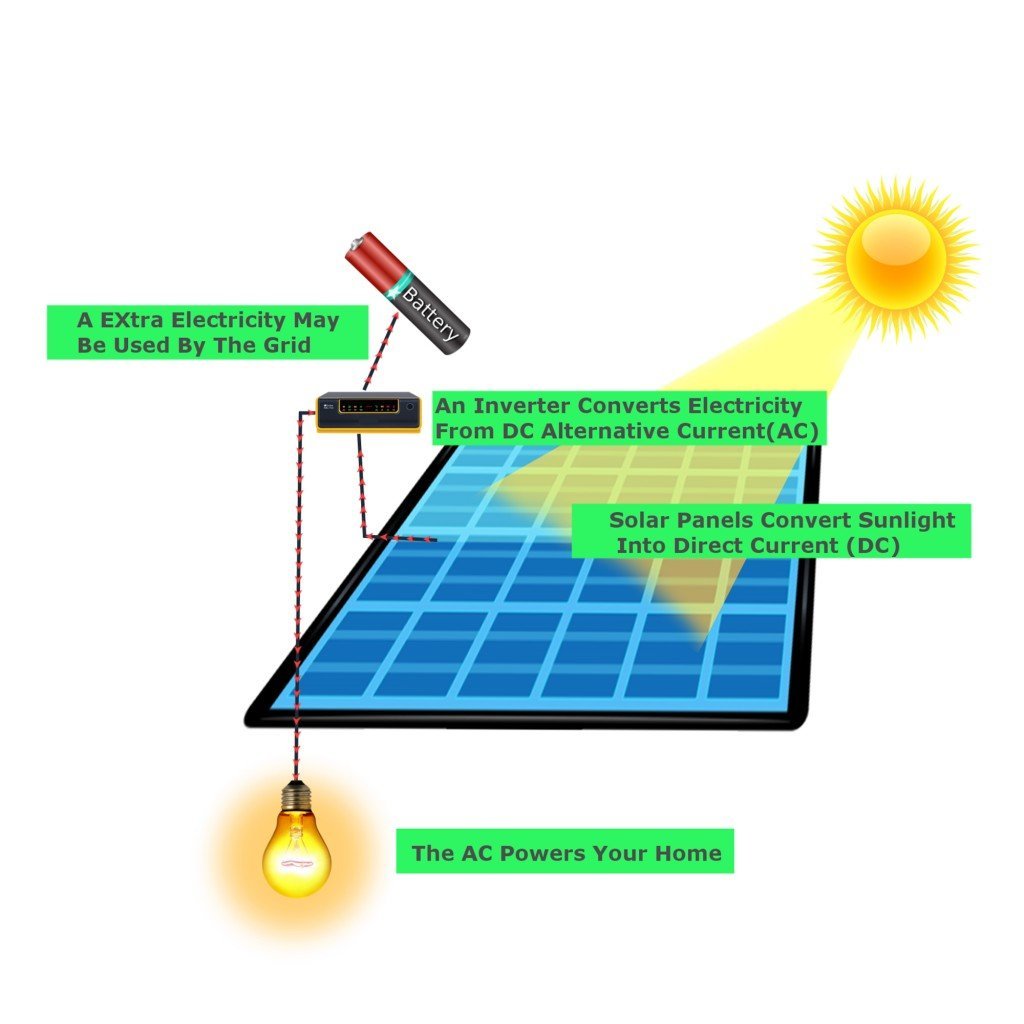 Once the electrons are emitted by a photovoltaic material, it produces electricity upon continuous exposure to light. The electricity produced by a Solar Panel is Direct Current (DC). The DC flows in one direction of the circuit. The DC electricity is then taken to a converter, where it is converted into AC. The AC power that is generated is used by home appliances, and if any extra current is available, it is stored in a battery that turns on when the Sun isn’t present.

Also Read: Why Is There A Limit To The Efficiency Of Solar Panels?

Structure Of A Solar Model

Silicon is preferred due to its abundance and availability (it’s the second-most abundant material on the earth’s crust), and the processing of silicon is also not environmentally taxing. The production of a solar cell involves the doping of the semiconductor material (in this case, silicon). Doping is the intentional introduction of chemical impurities into the semiconductor. Doping ensures that there are different layers of either a surplus of positive charge carriers (p-conducting semiconductor layer) or negative charge carriers (n-conducting semiconductor layer). When both these layers of p-type and n-type materials are combined, a p-n junction is formed between the two layers. 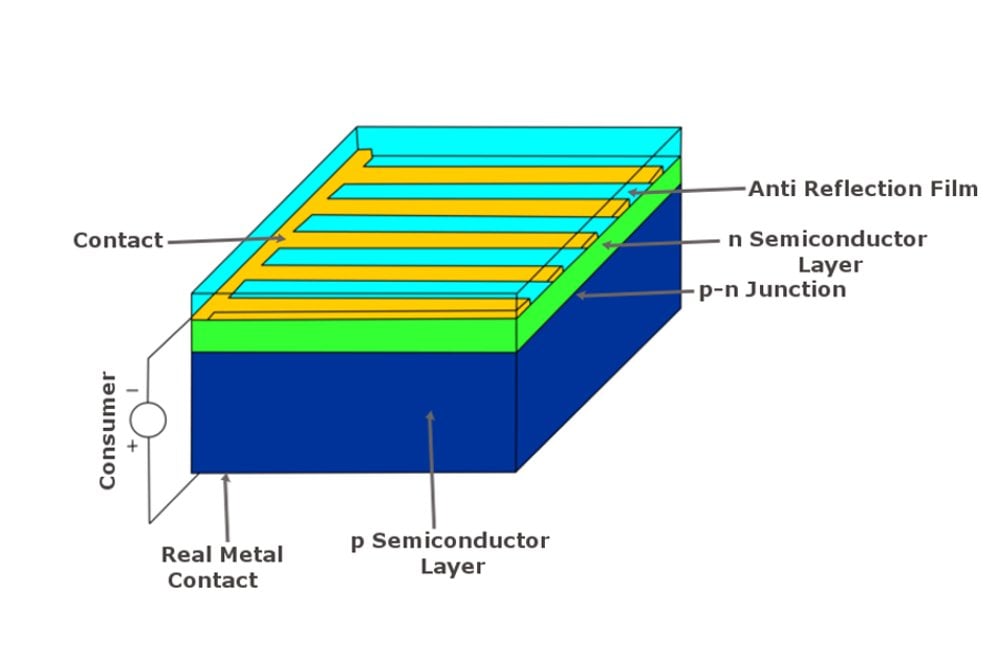 Internal Schematic of a solar panel

At the p-n junction, an electric field is developed that results in the separation of the electric charge carriers released when the light hits them. Through metal electrodes, we can extract this electric charge. The usable voltage from solar cells depends on the semiconductor material. In silicon, it amounts to approximately 0.5 V. Terminal voltage is only weakly dependent on light radiation, whereas the current intensity increases with higher luminosity. A 100 cm² silicon cell, for example, reaches a maximum current intensity of approximately 2 A when radiated by 1000 W/m².

Solar energy, in general, is still an ongoing field of research because, despite the high luminosity we receive every day (excluding weather conditions), we are unable to convert a large portion of that sunlight into useful energy. Scientists today are still trying to increase the efficiency of the solar panel, which will only become more important and critical as issues like global warming and fossil fuel dependence come to the forefront around the world.