Around the time when we began to realize the full extent of electronic circuits, the terms “computer” and “calculator” were used interchangeably due to their similar functionality.

Eventually, the former evolved into a device with wide-ranging purposes, from programming to browsing the Internet, whereas the latter was limited to something only devoted to completing calculations. However, like seemingly different animals from the same genus or family, they share a common history and operate on the same basic principles. A calculator uses several logic gates arranged in particular ways to perform complex operations on input numbers.

The first and relatively simple calculations were executed on an abacus. However, due to its slow and tedious operation, it was replaced by calculators that used gears and levers. These, as you might have guessed, were quite large and bulky.

The introduction of vacuum tubes replaced mechanical parts, but the calculators, although quicker, were still quite heavy. The world’s first electronic calculator, ANITA, used small vacuum tubes, but weighed a hefty thirty-three pounds! Compare that to your pocket calculator or the app on your two hundred-gram iPhone.

Finally, the age of digital electronics witnessed the birth of the transistor, the pinnacle of semiconductor technology, which allowed the extreme scaling down of size and made calculators cheaper and more accessible.

How do calculators work? 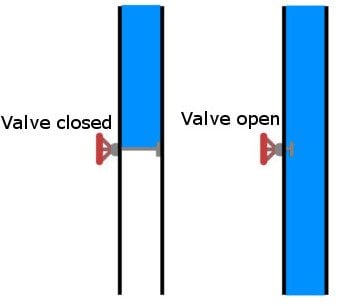 It is informative to know that the processor does not convert a decimal number into binary bits, but rather, these numbers are drawn for our convenience only.

The processor recognizes the button or an input via the circuit path and holds its binary value. For instance, 2 is written as 10 in binary. However, it converts binary to decimal each time it has to display what you have entered or the results of an operation. Explaining the conversion of numbers to different systems is time-consuming and irrelevant right now; all you need to understand is that the processor uses circuits that convert numbers and perform operations on a train of ‘1’s and ‘0’s. 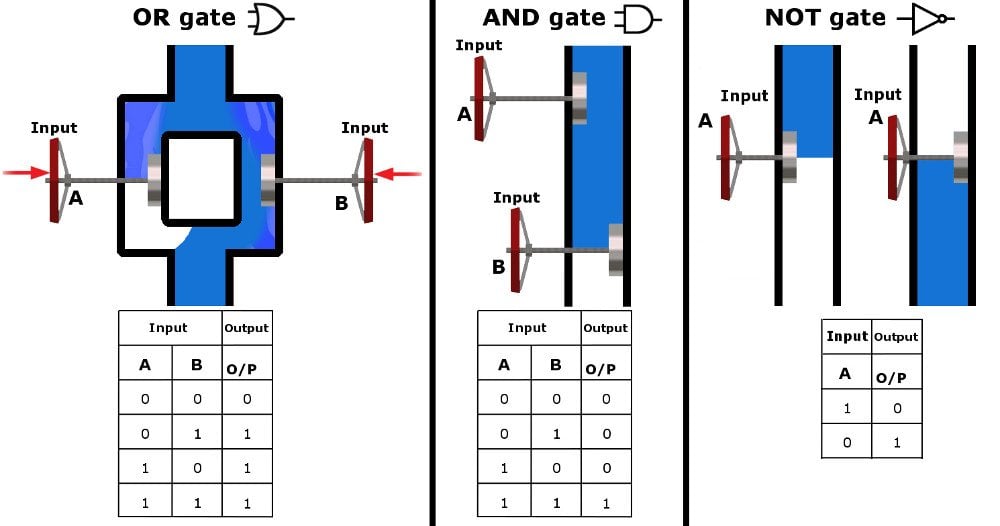 The combination of these gates can be used to form another important logic gate: Exclusive-OR gate. This gate gives the impression of adding its two inputs. The EX-OR operation is simple; it produces a ‘1’ when its inputs are different.

A calculator uses millions of such logic gates arranged in particular ways to perform complex operations on input numbers.

Let’s find out how these particularly arranged gates execute complex operations. However, our explanation is only limited to addition and multiplication to give you a general idea. Believe me, it gets much more complicated!

The adder is a logical circuit that adds two bits – A and B – but how is it any different from the EX-OR gate?

Looking at the final sequence of inputs for an EX-OR gate, one can see that although the sum of ‘1’ and ‘1’ is ‘0’, it also generates a carry bit that is not included in our table.

The circuit generates another bit that is “carried over” and stored as an extra bit in the memory. The bits are actually separated into two columns – sum and carry. Looking at the table, one sees that the sum can be generated by an EX-OR gate, while the carry over bits represent an AND gate. The two outputs can be generated simultaneously using a circuit known as a half adder.

But again, the circuit does not consider any carry over bit forwarded to it by a previous adder. A three-input adder that considers the carry-overs from a previous adder is called a full adder. . 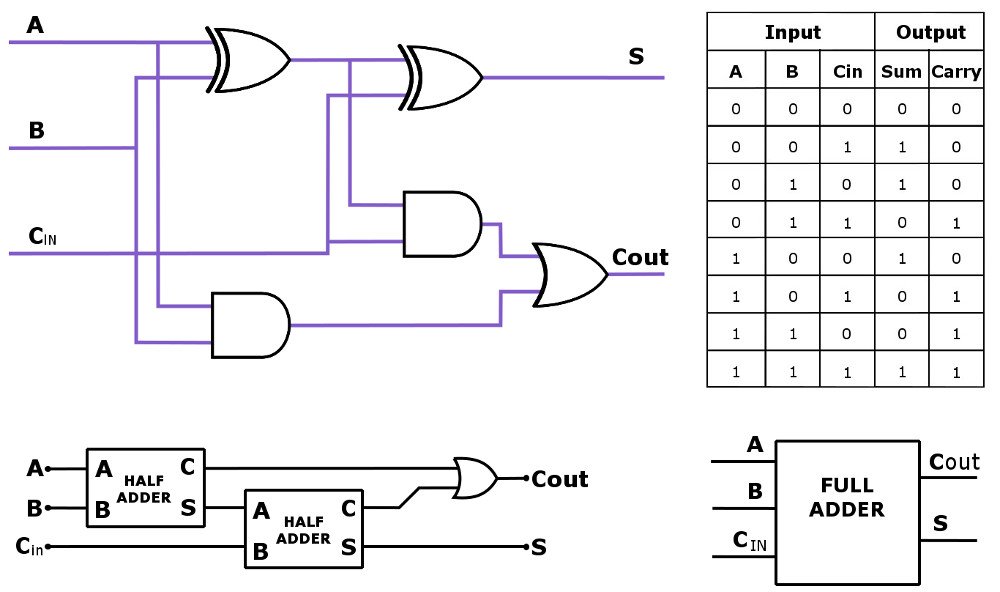 This complex circuit only adds one bit. (Yes, all that hassle for only one!)

Further, ‘n’ such bits can be added by an n-bit adder, which is a combination of ‘n’ full adders, with their carry overs passed on to the next adder. The individual sums are grouped together as the total sum, with a carry over generated by the last adder. 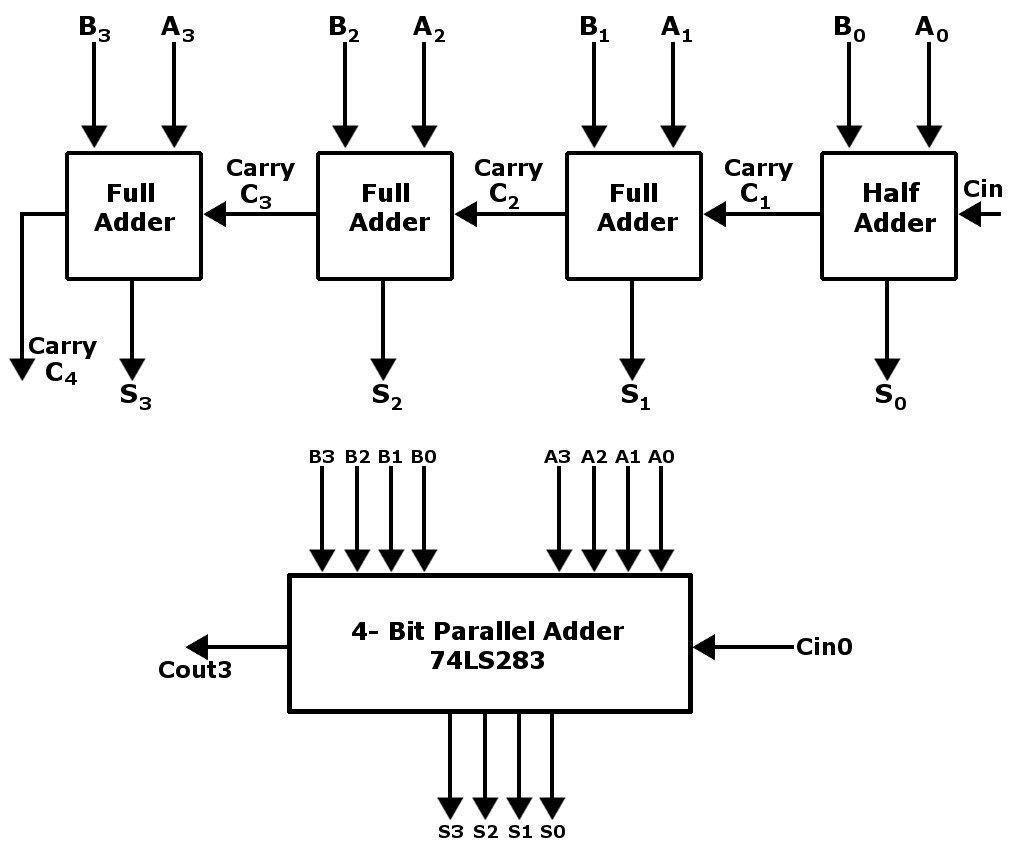 Also, the number of output bits generated are double the size of the seeded input bits. The operation can therefore be implemented by what is called partial product accumulation. The example shows the multiplication of two 2-bit numbers – A and B – which produces sums that are the products of individual bits.

The individual products are generated by 4 AND gates. Furthermore, these sums can be added with the help of half adders to produce the sums S4-S0, grouped together to form S, the product of A and B. 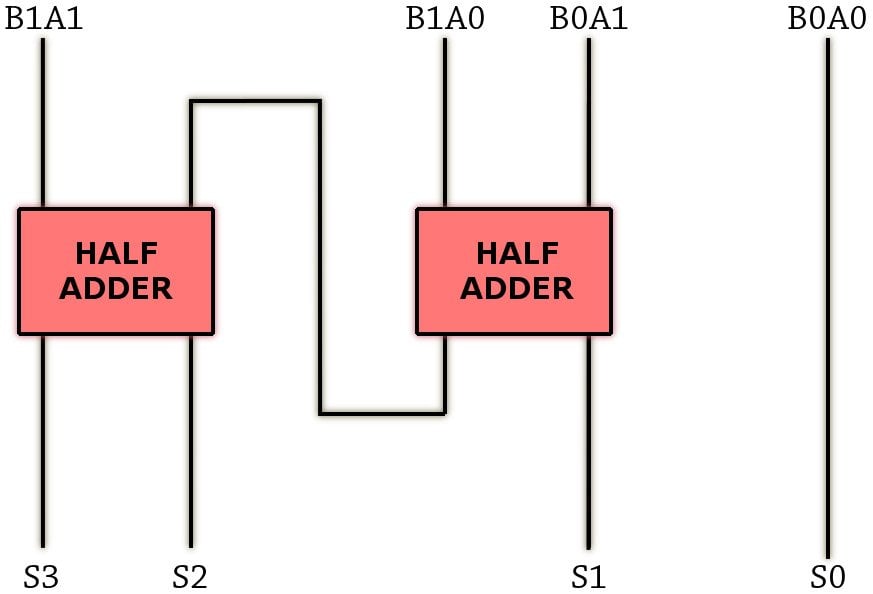 Similarly, using the same principle, 4-bit numbers can be multiplied together using 16 AND gates and 12 adders to generate an 8-bit number and so on.

The calculator also subtracts and divides numbers using similar logic gates. It is important to know that we have explained the most basic or primitive circuits to add and multiply, just to give you just a general idea. These circuits were long ago replaced by much faster and quicker circuits. A computer uses the very same logic gates for general purpose computing, which is brought about by calculating and crunching numbers at its core. The calculator only calculates; it is not programmable.

As more and more transistors were stacked on a processor, the range of operations for calculators expanded. Today, calculators are far more advanced and more scientific calculators with more memory and superior processors, and are used by professionals, such as engineers, who are therefore able to perform logarithmic calculations and calculus. And now, this device, like so many others, has been integrated with our beloved smartphones. 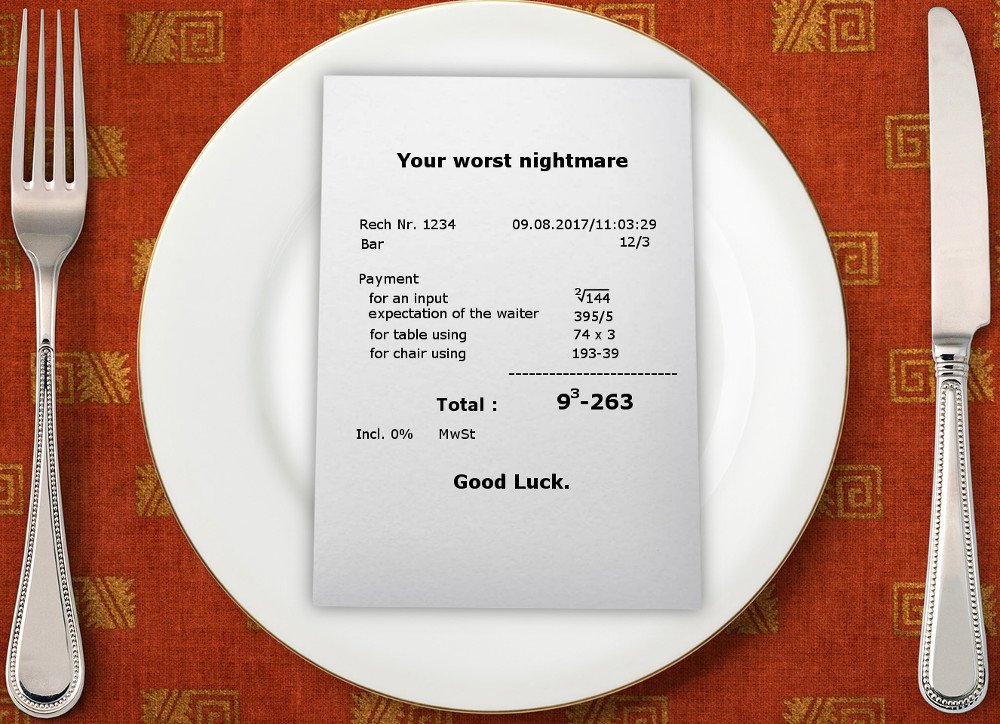 Although it has relieved us of the torments that mathematics represents for so many of us, it is believed that our dependence on such devices has made us cognitively lazy. The amount on the bill might not split into seven perfectly every time, but do it in your head once in a while just to keep the juices flowing. You never know when your phone will be dead and you’ll be forced to do dreaded math in your head – just like in the good old days!