In the movie, the comet eventually hits Earth and destroys it. The movie depicts humankind’s denial, selfishness and greed, all of which stopped them from finding a solution to avoid the collision in time. It begs the question… is such an extinction-level threat possible? This article will break down the movie’s science, apart from the alien creature biting the head off three-time Oscar winner Meryl Streep.

Can A Comet Really Destroy The Earth?

What is a comet? NASA gently describes them as giant space snowballs, except without the snow. They are made of ice, dust and rock, and are leftovers from when the solar system was forming. Currently, there are 3,743 comets documented, although there are billions estimated to be hovering around in space.

On average, a comet is a couple of miles wide, which is about the size of an average golf course. However, as it travels towards the sun, the ice melts and the vapors form a cloud around the comet. This can increase its size to as large as 50,000 miles (80,ooo kilometers)!

Now, imagine something that size traveling at thousands of miles an hour on a collision course towards Earth… you wouldn’t expect the planet to stay in one piece, right?

Even dropping a basketball from 10 floors up onto a car is enough to dent its roof. It’s not hard to believe that frozen rock weighing thousands of kilograms could destroy the Earth.

Could Comet Dibiasky Destroy The Earth?

The fictional “Comet Dibiasky” was about 5-6 miles (8-10 kilometers) wide, traveling at thousands of miles per hour, and was set to hit Earth in 6 months and 14 days from its discovery. That’s plenty of time for the comet to gather momentum. The kinetic energy carried by the comet would be tremendous, and after it hits the Earth, it would release this energy.

When the movie was being written, astronomer Dr. Amy Mainzer was consulted as a scientific advisor to the cast and writers. A credible source, Dr. Mainzer works at the University of Arizona and is one of the world’s top scientists for asteroid detection.

Dr. Mainzer believes that this sort of extinction-level threat, no matter how rare, is still quite possible. She even based Comet Dibiasky on a comet her team discovered, called NEOWISE. However, there is no need to panic, as NEOWISE isn’t on a collision course with Earth. We are safe from comets… for now! 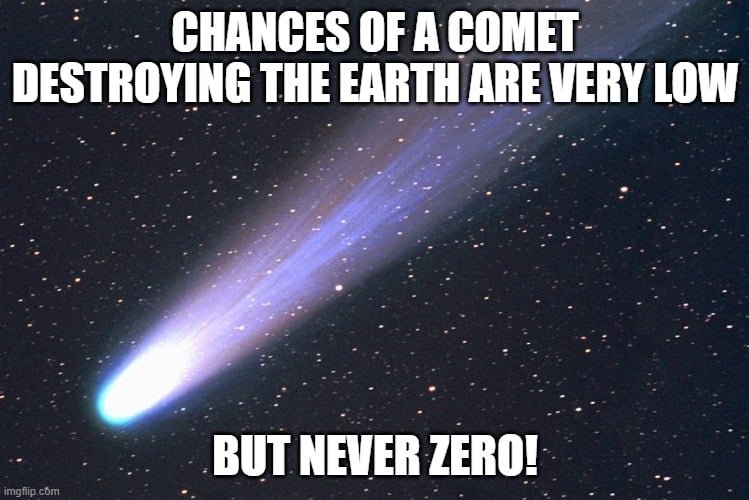 You are more likely to die from a snake bite than a comet.

Comet Dibiasky is similar to the comet that wiped out the dinosaurs, so it’s safe to assume that the comet could wipe out humans too.

To put this into perspective, NASA states that asteroids larger than 140 meters (>0.1 miles) are big enough to cause severe damage. Comet Dibiasky was 5.5 miles wide!

I’d say the movie got the Earth destruction scene spot on. When Comet Dibiasky hits the Pacific Ocean, it sends a powerful shockwave across the Earth that destroys everything in its path. The comet and its subparts are also on fire as it burns through the atmosphere, thanks to high levels of air resistance. This vastly increases the comet’s temperature. Upon impact, this causes whatever is on the Earth’s crust to burn up, essentially killing all life on the planet.

What Kind Of Damage Can A Comet Cause?

Comets or asteroids have hit Earth before, but humankind has survived those impacts. This is because not all comets can destroy the Earth; in fact, some barely cause any damage whatsoever!

The factors determining the damage intensity that a comet can cause are its size, speed and weight.

Based on these parameters, a comet can cause all sorts of damage. For starters, small comets that are a few meters large would burn up in the atmosphere before they hit the Earth. Large ones cause shockwaves upon impact. This would send ripples across the ground. If a large comet landed in the ocean, it could cause a tsunami or huge tidal waves.

Imagine throwing a rock in a pond. When it lands, it causes some water to splash and sends ripples across the pond. Picture that on a larger scale, however, one big enough where the waves could annihilate entire coastal regions.

That’s just the physical damage. The heat the comet brings with it releases very high levels of thermal radiation, enough to burn up the oxygen in the atmosphere. Along with that, there will be ionizing radiation the comet carries that could fry all electronic devices, like an electromagnetic pulse (EMP). After impact, all the debris and dust would pollute the air, making it unbreathable.

These are just the primary effects.

It’s not just the comet’s impact that is life-threatening, but also the impact’s secondary effects that continue to threaten life. There would be large fires spreading across Earth, as shown in the movie. Very large comets would burn all the oxygen in the atmosphere as it passes through, depleting it and changing the nature of our atmosphere. The atmospheric damage would be immense in such cases. Large comets would also cause substantial dust clouds to cover the Earth’s surface, blocking all sunlight for months or years! Earth would become completely barren.

To sum it up, comets and nuclear bombs cause similar types of damage… and would have similar results.

The fear of comets striking the Earth dates all the way back to 1705, when astronomer Edmond Halley voiced his concerns. However, the odds of an individual dying from a comet are the same as dying from an airplane crash or a flood in the United States.

However, as Dr. Mainzer stated, this extinction scenario is unlikely, but we have to be prepared. There are countermeasures in place. As shown in the movie, the Planetary Defense section at NASA is very much real.

They have contingencies in place, like the Double Asteroid Redirection Test (DART) mission, which can change the trajectory of the incoming asteroid. Even missiles can be launched at small comets/asteroids to break them up into smaller pieces that pose no or minimal threat.

Also Read: Can An Asteroid Knock Earth Out Of Its Orbit? 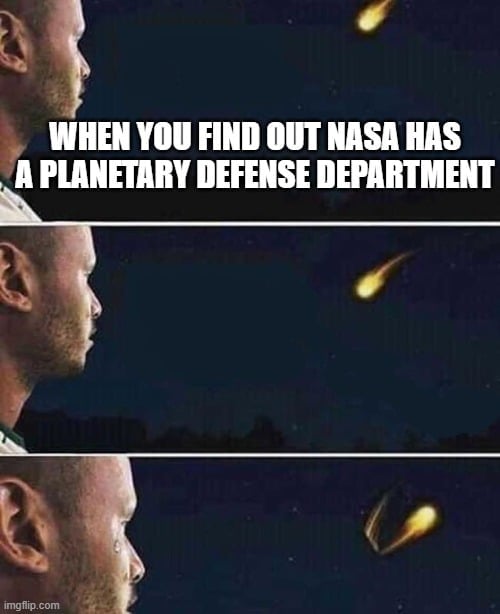 Hope for the best but prepare for the worst.

‘Don’t Look Up’ did get the science right and the scenario of a comet hitting the Earth and ending life is entirely plausible. That being said, you can rest easy, as it is very very unlikely!