A falling star, contrary to its name, is not actually a star, but a piece of space dust or rock known as a meteor.

The night sky not only brings us the beauty of all the stars, but also ignites the fire of mystery in our hearts. The vastness makes us question the small world in which we live, and no matter how young or old you are, there are always times when our minds unknowingly wander into the abyss above, as if we are designed to look up and wonder. 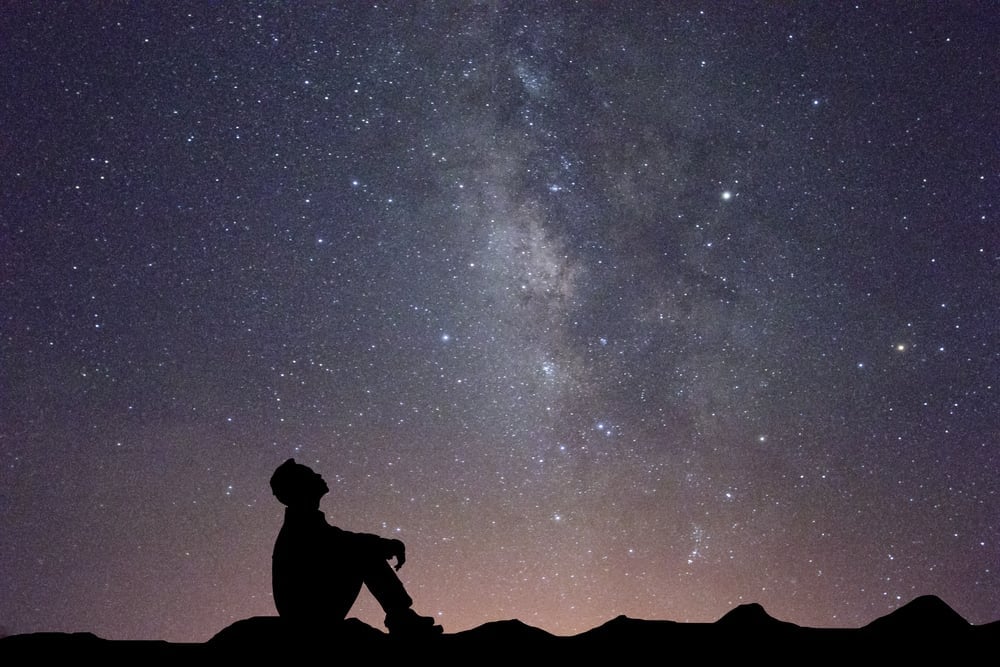 A man looking up at the vast night sky. (Photo Credit : I MAKE PHOTO 17/Shutterstock)

But there is another thing that this stunning night sky gives us… hope! In many cultures around the world, such as in Japan, a shooting star is supposed to grant a wish, and temples are even made for fallen stars (Source).

The trope has also been used in many movies, such as Zathura: A Space Adventure. 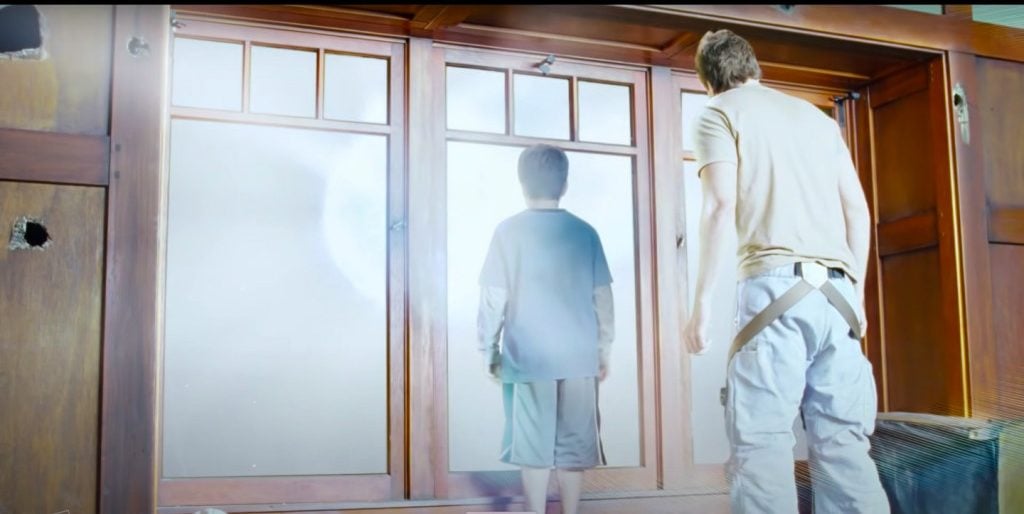 We wish from our hearts into the darkness above, and hope that the shooting star will carry our wishes where they need to go. These falling stars give us hope, but are these “falling stars” really stars at all? And why do they fall in the first place?

Is a falling star really a star?

There are millions of celestial objects in the night sky, the most abundant of which are the stars. When we look up at the sky and see all the bright little spots shining in the midst of the black, we consider all of them to be stars.

This is clearly not the case, but it is impossible to distinguish between different objects without a telescope, and not everyone knows all the different kinds of objects present in space. We are all familiar with the stars, so we tend to call everything glittering in the sky a star. 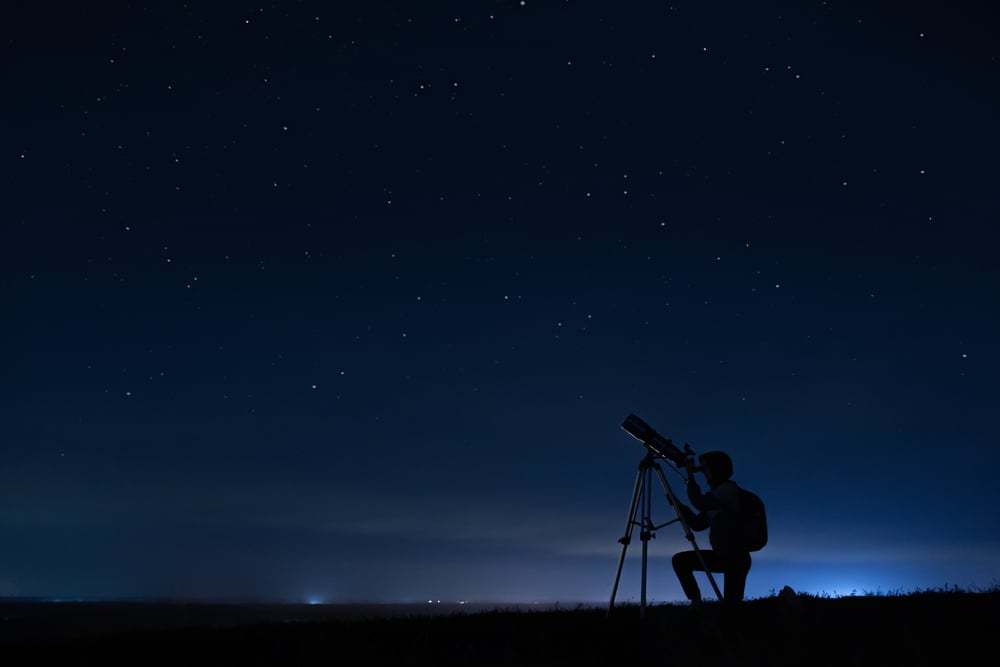 A person observing the stars through a telescope. (Photo Credit : Peakstock/Shutterstock)

A star is a huge ball of gas that burns with nuclear fusion and gives out light. Stars have their own light, so they shine bright in the night sky. Now, if the stars are basically huge fireballs, how do they fall and why don’t they destroy us in the process?

Well, here’s the thing… a falling star is not really a star. A star cannot fall for several reasons. Firstly, the closest star to us is the sun, which certainly never “falls” down; and secondly, even if there were a star nearby, the earth does not have enough gravitational potential to make it fall, as a star is thousands or even millions of orders more massive than Earth. 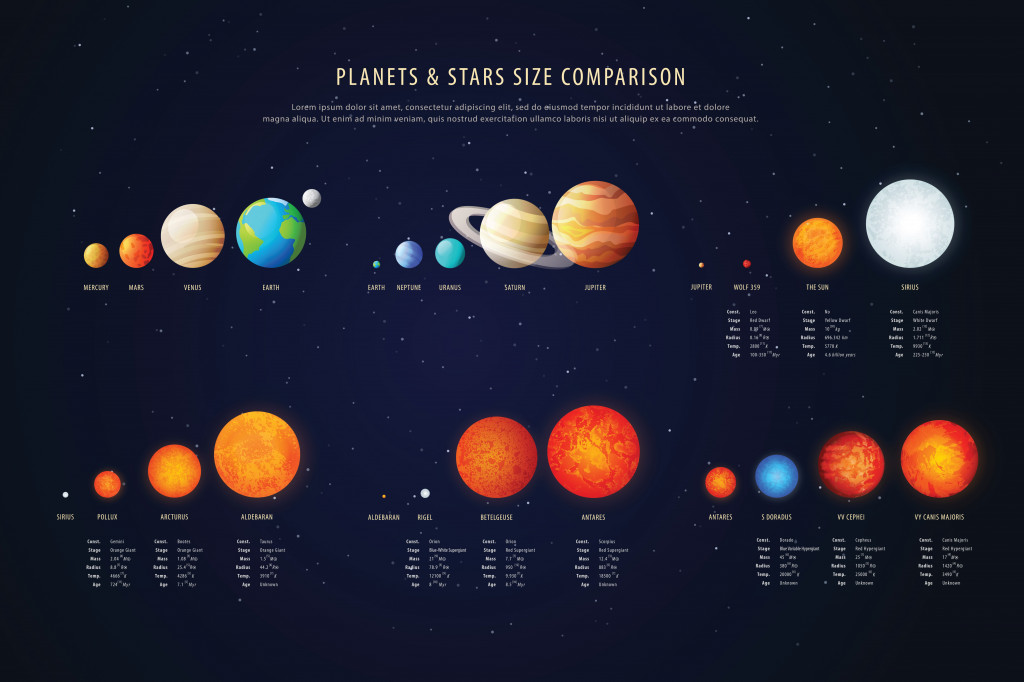 What is a falling star?

As explained earlier, we humans have a habit of calling every shiny thing in space a star, but if that’s not true, what is that thing we sometimes see streaking across the sky?

Space is full of small objects, such as rocks and dust. These rocks and dust might come from comets, asteroids, or other bigger objects that move around space, losing their mass in the process. Sometimes these small rocks are also made of metals.

These space rocks or dust are called meteoroids. Thousands of meteoroids are always traveling around the empty spaces of our solar system.

When these meteoroids get too close to the earth, they become attracted by Earth’s gravity and thus begin falling down to the ground. Due to the friction they experience as they pass through the atmosphere around the earth, the temperature of these meteoroids increases and they begin to shine with a tail dragging behind them as they burn.

This meteoroid with a burning tail is what we see as a “shooting” or “falling” star, but it is technically known as a meteor. When these meteors enter Earth’s atmosphere, they fall at an astounding speed of roughly 60 km/s (or 37 miles/s). To put this in perspective, the fastest car in the world drives at 0.12 km/s (or 0.08 miles/s). 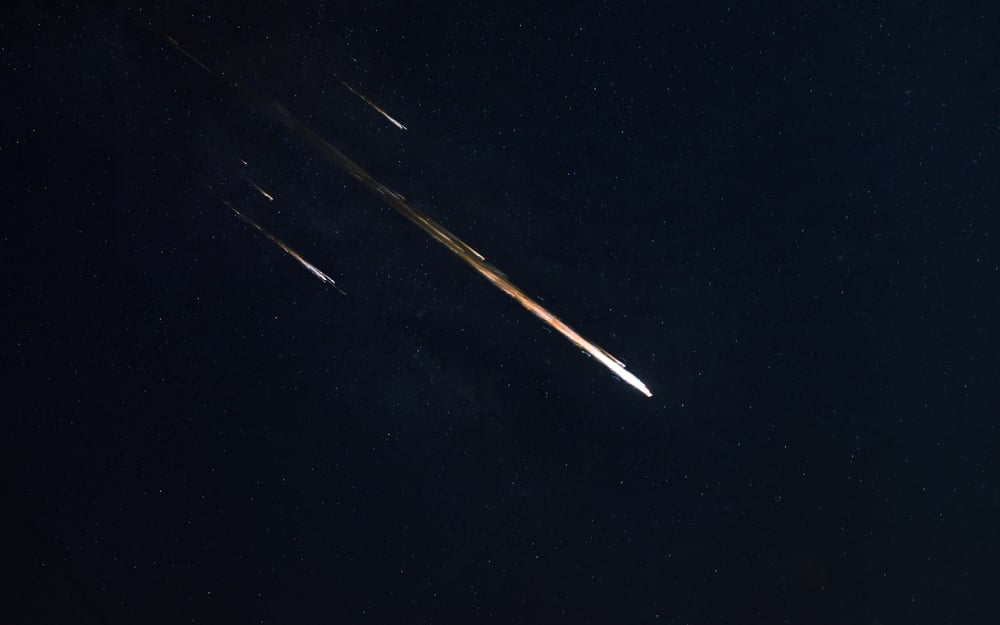 Because they are moving at such high speeds, these meteors burn fast, and before they can even hit the surface of the earth, they burn up completely, leaving no trace of them behind. Some meteors are comparatively larger and may survive this onslaught of friction (yet they end up being extremely small, usually smaller than our thumb, by the time they hit the surface of the earth). These little rocks from space are known as meteorites.

These meteors don’t usually fall individually. One can sit and see hundreds of them falling one by one if you’re at the right place at the right time. This constant rain of meteors is known as a meteor shower. 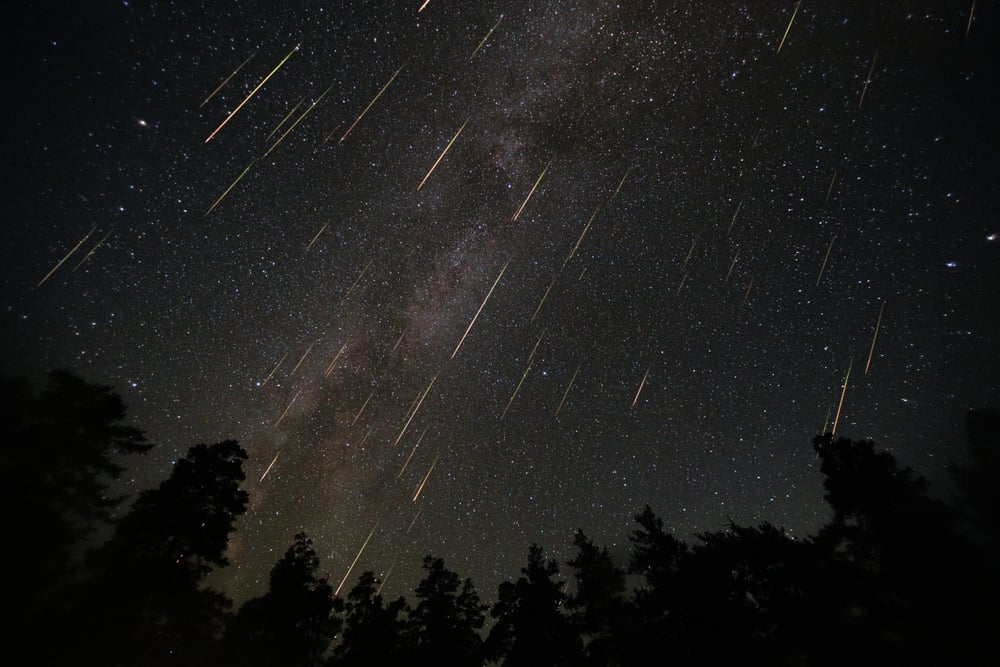 A meteor shower usually takes place when a comet passes relatively close to us, so its dust enters the planet’s atmosphere, creating a beautiful rain of light.

For example, one famous meteor shower coming from the area of the Orion constellation is named the Orionids (the Orionid shower usually occurs between October 16-27). 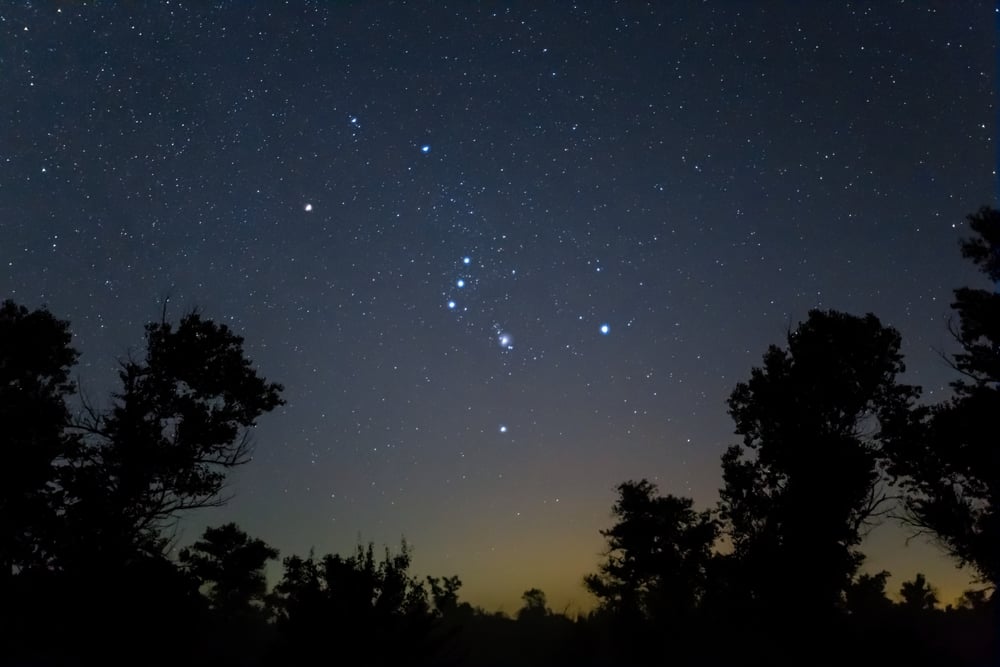 The friendly and beautiful genies of space, which we fondly know as falling stars, are not actually stars at all, but dust from space that gets too close to the earth and lights up due to atmospheric friction, thus turning into meteors. 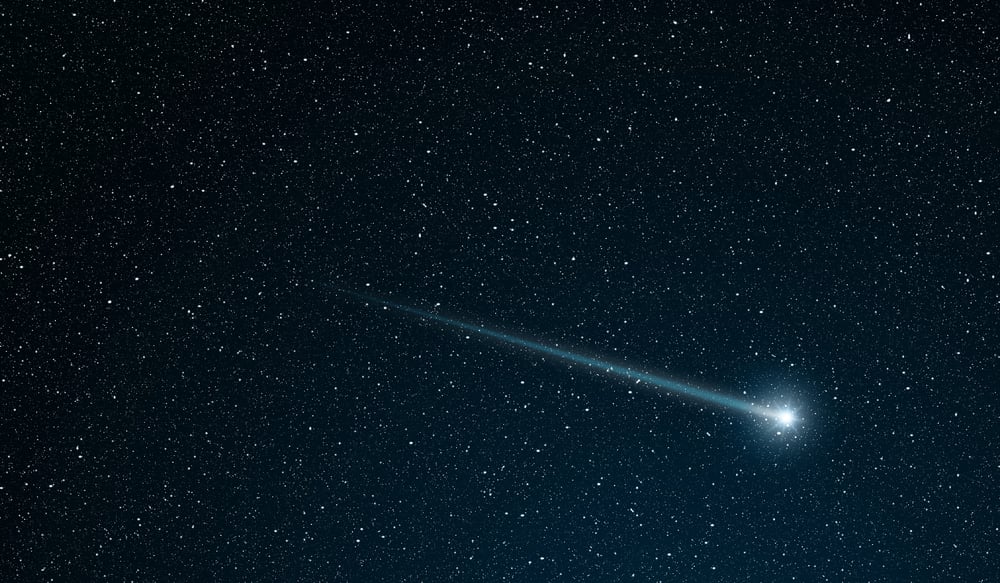 A meteor streaking across the sky. (Photo Credit : paulista/Shutterstock)

They might not sound as dramatic or magical as falling stars, but they make up for that with their own stunning beauty as they streak across the night sky!