While destroying a hard drive using magnets is very plausible, ‘The Magnet Scene’ from Breaking Bad is unfeasible, and there are a few very good reasons behind that.

“Yeah, b****! Magnets!” is one of the most iconic lines in television history. A jubilant Jesse Pinkman vocalized those three magical words after he and his partner in crime, Walter White (aka Heisenberg), successfully destroy a laptop using a junkyard electromagnet—the same kind used to lift cars.

The friendly meth manufacturers then proceed to destroy another laptop, which they believe contained footage of them cooking methamphetamine, locked inside a fortified evidence room using the same electromagnet. However, a thick wall stands in their way.

Nonetheless, as the episode concludes, we learn that the duo was actually successful in destroying the laptop and therefore, getting themselves off the hook.

These events transpire in the first episode of season 5 titled ‘Live Free or Die’ of the popular drama series and became one of the most talked-about scenes in the show’s 5-year run. While it made for great television, how scientifically accurate was the scene? Could you really destroy a laptop, more specifically, the data stored in a hard drive inside the laptop using a powerful magnet?

The key lies in knowing how a hard drive stores all of our data… spoiler alert, magnets!

How do hard drives store data?

If you’ve ever messed around with your computer, you might already know what a hard drive looks like. The two primary components are a silver platter (disk) and a read-write head. The platters are generally made of an aluminum alloy (or metal-coated glass) and are coated with a thin film of ferromagnetic material on both sides. The read-write head is composed of a thin magnetic blade and is responsible for encrypting (and decrypting) data on the platter surface. 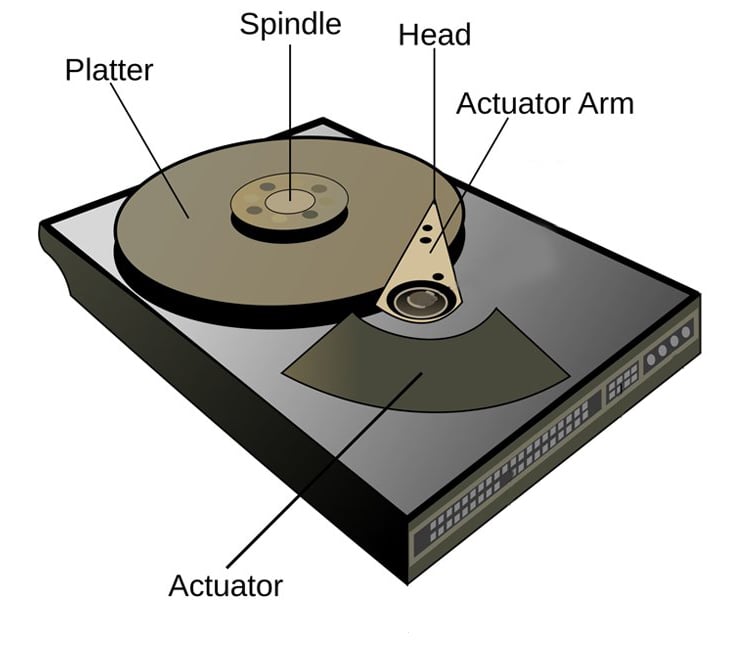 The ferromagnetic material deposited on top of the platter surface can be magnetized in any specific direction. The surface is divided into pie-shaped sectors and concentric tracks. Both are further sub-divided into billions of smaller regions, formally known as domains. Each region holds a single digit of binary (all of our data is stored in binary) and can be magnetized to be either positive or negative. A positive polarization usually represents 1 in binary terms, while a negative represents 0.

Every time the user hits Ctrl + S to save something or installs an application, an electric current flows through the read-write head, which in turn polarizes a specific region on the platter and encrypts data in binary form. On the other hand, when a read request is made (when you open a file or an application), the region’s magnetic field induces an electric current through the RW head.

Specialized software installed on the motherboard instructs an actuator arm to move the RW head to a specific position on the platter where the required data is stored or is to be stored. Apart from the actuator arm, platters are mounted on rotating spindles that aid in aligning the platter surface and the RW head.

Also, some hard drives incorporate multiple platters (the physical difference between a 1TB & 2TB hard drive) and in them, each platter has its own RW head.

While magnetism helps us store all our data in compact pouch-sized drives, it can also be used to destroy the data permanently!

As explained earlier, data is stored in binary form by magnetizing microscopic domains on the platter surface. However, if another magnetic field of appropriate magnitude is introduced within a specific distance from the hard drive, the alignment of these tiny domains can be altered. This process of altering or deleting an unwanted magnetic field is called degaussing and the instruments used for the process are called degaussers. The method can be implemented on various magnetic media devices, including CRT monitors, hard disk drives, floppy disks, reels, tapes, etc. 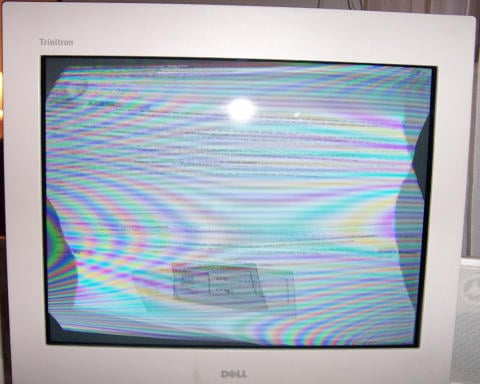 Merely deleting stuff of your computer or physically destroying the hard drive doesn’t guarantee the complete erasure of your data. Firstly, your data is never really deleted (Where do all deleted files go?) and second, advancements in forensic science have made it possible to recover data from broken shards of a hard drive platter.

However, data can be altered beyond recovering/identification and degaussing does just that.

Every hard drive is characterized by a property called coercivity, the resistance of a material to any change in magnetization. An efficient degausser is capable of creating a magnetic field several times greater than the coercivity value of a hard disk drive.

The application of such a high-intensity magnetic field permanently changes the alignment of magnetic domains on the platter, thus destroying the data beyond recovery and rendering the hard drive unusable. There are various types of degaussers available in the market (coil, capacitive, and permanent magnet) depending on the media equipment to be cleansed and the strength required.

Also, degaussing is an NSA-approved method for the data sanitization of magnetic media (Source) and can be performed within a few minutes.

Scientific accuracy of the magnet scene from Breaking Bad

Now that we have established that a magnet can indeed destroy the data on a hard drive beyond restoration, it’s time to put the ‘Magnet Scene’ through the wringer.

By hooking a magnet to several car batteries (21 in series and 21 in parallel to be precise), Jesse and Walter White created an electromagnet that could work as an improvised degausser. As soon as the electromagnet is turned on, things start flying across the evidence room, and a computer in an adjacent room is shown to go haywire. Eventually, the suspected laptop crashes into the wall and the duo scamper off with their heads held high, once again narrowly escaping a tricky situation.

While specific technical details about the electromagnet and its distance from the evidence room wall are unknown, Rhett Allain of WIRED made a couple of assumptions and ruled in favor of the scene. One would also assume, if the electromagnet was strong enough to tip the whole truck, that it could also destroy a tiny hard drive.

However, despite Allain’s review, there aren’t enough facts/details available to draw a conclusion on the plausibility of the scene.

A typical electric degausser works off of 110-115 volt current and the hard drives to be sanitized are placed inside the degausser or under it (in the case of a degausser wand). There exists a cubed relation between distance and the current required (if the amount of magnetic field required to degauss is held constant).

So, a great amount of current would need to be fed to the coils in the electromagnet to generate the necessary magnetic field.

Even if the electromagnet created a magnetic field strong enough to degauss the hard drive, factors like the thickness of the evidence room wall and the shielding effect produced by the metal door would reduce the overall strength of the magnetic field.

Furthermore, the type of storage device used in the laptop also wasn’t clear. If the laptop incorporated an SSD instead of a hard disk drive, degaussing wouldn’t have worked. Solid-state drives or SSDs make use of integrated circuits instead of magnetically storing data, so methods like degaussing have no effect on them.

The same scene was also investigated by MythBusters in the final episode of their spin-off series MythBusters Jr. In their case, the electromagnet they used was unsuccessful in moving a single object, let alone destroying a laptop!

In other words, it wouldn’t be far-fetched to say that the magnet scene from Breaking Bad is indeed a myth!

How much do you know about the magnets scene from Breaking Bad?