People usually breathe more through one nostril at a time, with the dominant nostril switching periodically. This is known as the nasal cycle.

Let’s try something: hold your index finger horizontally, right below your nose. Now exhale and note the airflow pattern on your finger. Do you find that one nostril is exhaling more air than the other?

It is a little-known fact that the human body has unequal airflow between the right and left nostril, with one being dominant, meaning that it has more free-flowing air than the other.

This flow of air alternates periodically, at intervals anywhere between one hour to seven hours, with more air flowing through one half of the nose than the other.

The reason why this switching goes largely unnoticed is that the total airflow resistance remains the same, and the volume of air supplied remains more or less constant.

Nasal Cycle: How Does It Work?

A small erectile tissue found in the nasal septum creates a slight obstruction that partially blocks the airflow on one side of the nose. This obstruction changes periodically, alternating between nostrils, and is the key component of the nasal cycle—a phenomenon that occurs in 70-80% of healthy adults. 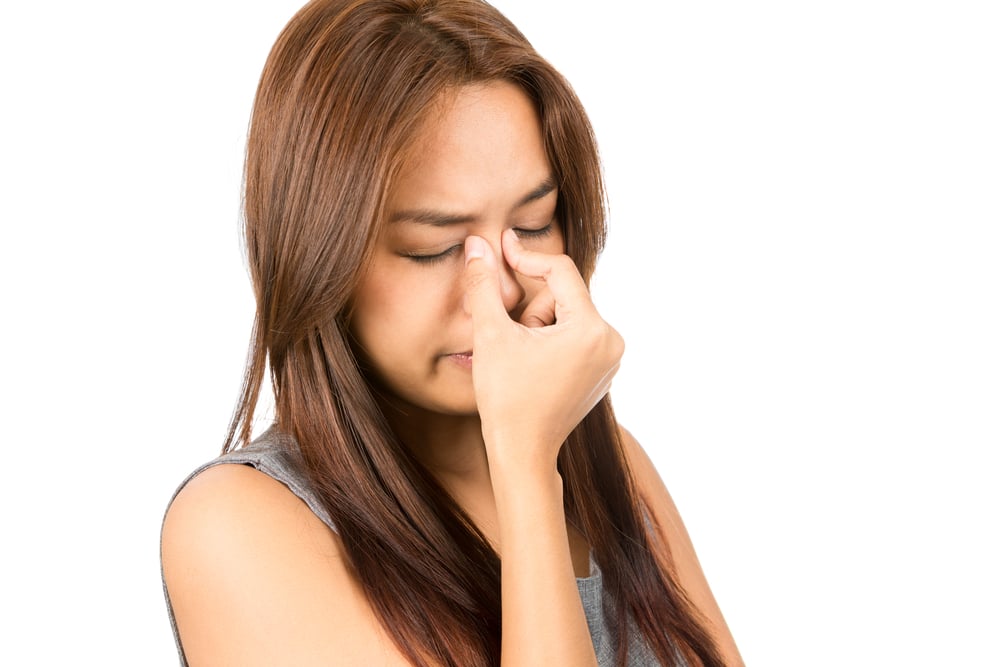 We never truly appreciate our free-flowing state of breathing until we have a cold, our nose get blocked and we end up sounding like orcs from Lord of the Rings! (Photo Credit : Daily Travel Photos/Shutterstock)

What Is The Science Behind This Phenomenon?

The nasal cycle occurs due to the swelling of the erectile tissue. This tissue is located in the anterior part of the nasal septum and the inferior turbinate.

The nasal septum is the bony structure located in the middle of our nose that separates the two nostrils. The inferior turbinate is a small bony structure covered with soft tissue located inside the nose, along the sides of the nasal cavities. The swelling of this tissue restricts airflow through one nostril over the other.

The autonomic nervous system is believed to influence the nasal cycle.

The sympathetic nervous system controls our “fight or flight response”. It increases blood pressure, heightens alertness and releases sugar to the muscles, readying them to move into rapid action. It also raises the heart rate and increases respiration rate and oxygen consumption.

The parasympathetic nervous system manages our body in the opposite direction; it is in charge of our “rest and digest” state. It lowers heart rate, relaxes the muscles and repairs cells and tissues. It also increases blood supply to the digestive system to absorb food and cleanses our body from the effects of stress. 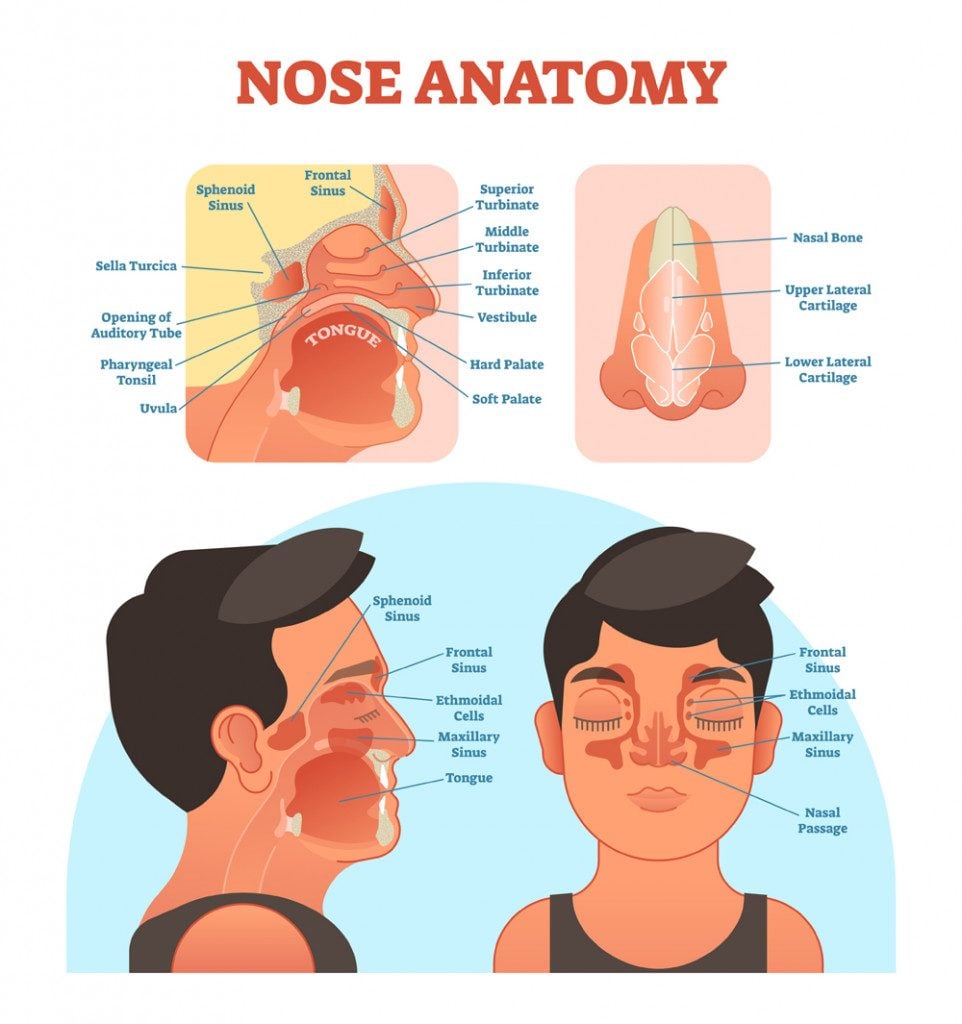 Our noses are quite complicated, considering how small they are! (Photo Credit : VectorMine/Shutterstock)

While the physical mechanism of the nasal cycle is known, the whys and hows are still a bit unclear.

What Is The Purpose Of This Nasal Cycle?

Though a definitive reason for the nasal cycle is yet to be understood, many theories have been postulated. Two of the most popular ones put forth revolve around cleansing and a range of smells.

We are constantly breathing in dirt and germs from our environment. One study suggests that the nasal cycle is important for the elimination of trapped dirt and germs. Alternating the dominant nostril causes a congestion-decongestion cycle on each side, resulting in a cleansing of mucus, along with the dirt and germs trapped within it.

Another study hypothesizes a smell-oriented theory. This means that as the nasal cycle progresses and the airflow keeps changing between nostrils, one becomes receptive to a particular smell. This allows our brain to process a greater range of odors.

When airflow varies in each nostril, the molecules of odorants drawn in through each side also vary. This affects the way our olfactory mucosa (located in the upper region of the nasal cavity) captures smells.

Also Read: Should You Breathe Through Your Nose Or Mouth While Exercising?

How quickly an odorant is absorbed by the olfactory mucosa influences our sense of smell.

When an odorant is one that can be absorbed easily by the olfactory mucosa, but the airflow rate is low, fewer odorant molecules are picked up and sent to the receptors, thus provoking a weaker perception of smell. Conversely, when the airflow is greater, more molecules are available for absorption by the olfactory mucosa, resulting in our experiencing a stronger smell.

In the case of a not-so-easily absorbed odorant molecule, the perception of a strong smell requires the additional time provided by the non-dominant nostril’s slower airflow, in order to be absorbed by the mucosa. When slower absorbed odorants pass through the airflow of the dominant nostril, they are not taken up fast enough to be passed on to the receptors, resulting in a weak perception of that smell. Smelling is quite a complicated process. (Photo Credit : Dean Drobot/Shutterstock)

What Influences The Nasal Cycle?

Curiously, the nasal cycle is rarely seen at birth and seems to develop as we grow. Children show shorter cycles with faster switching of dominance between nostrils. As we age, the duration of the nasal cycle increases, then grows quite erratic in the elderly.

This is believed to occur due to our autonomic nervous system maturing as we grow into adulthood and in our prime, and then deteriorating functionally as we age.

Other factors that influence our nasal cycle include sleep (lengthens the duration of dominance, with fewer switches in the REM cycle), posture (lying on your left makes the right nostril dominant, and vice-versa), exercise (post-exercise switches are faster), and humidity.

Estrogen levels peak (when blood levels of estrogen are at their highest) during ovulation, which is why women on their periods experience ‘stuffy noses’

Yoga And The Nasal Cycle

One of the practices of Yoga, India’s ancient science for health and wellness, is Pranayama (practice of breath control).  A basic Pranayama technique is Anulom Vilom, or alternate nostril breathing, which is said to balance your autonomic nervous system.

One fascinating study reported that breathing through a particular nostril can have a stimulating or relaxing effect on the nervous system.

In this study, 48 male subjects between 20-48 years of age were divided into three groups. They were told to breathe either through their right or left nostril or alternate between the two. This was followed for 27 cycles of inhalation and exhalation, four times a day, for a duration of one month.

The findings showed significant and measurable differences in the oxygen consumption and metabolism levels between the three groups. The practice of pranayama is known to influence the nasal cycle. (Photo Credit : fizkes/Shutterstock)

Yes, we do not breathe equally from both sides of our nose; one side usually has more free-flowing air than the other, and this dominance of airflow alternates many times a day for most of us.

While we still have a lot to learn about the true purpose of this phenomenon, we have discovered a clear relationship between this nasal cycle and our brain activity, oxygen consumption and metabolic functions.

Also Read: How Does The Human Respiratory System Work?

Even as you read this, further research is being carried out to determine how this switching of airflow dominance between nostrils influences our nervous system and our lives!

Respiratory System: From Inspiration to Expiration Explained in Simple Words
If you wish to buy/license this video, please write to us at admin@scienceabc.com.
References
Share This Article