The body is symmetrical on a vertical plane, with some organs being on the right side and others on the left. This is due to the way the organs are interconnected and the way they function. For example, the liver is on the right side because it is connected to the small intestine via bile ducts.

After a few decades of life, most people are very familiar with the appearance of their body, but that is primarily just from the outside. In other words, while people are aware of their critical organs, they don’t always have a firm grasp on where exactly they are. I have spent the better part of my life thinking that my kidneys were near my hips, on the front of my body, when in actuality, one kidney is situated on either side of the spine, at the back of my torso, beneath the rib cage!

Some of our organs (internal and external) also come in pairs, and are often symmetrical in the body, such as the lungs, kidneys, eyes and ears, while others do not have a matching pair and appear on either the left side, the right side, or the center of our bodies. The question is, what determines this placement, and is there a reason why some organs tend to the right or left? Before we can get into this explanation, we need to do a quick review of the anatomy of the body, as well as the most important organs and organ systems.

The human body is one of the most remarkable achievements of natural selection and evolution that nature has ever produced, but basic concept of human anatomy is similar to the underlying principles for other creatures as well. Our most fundamental structural unit is cells, which makes up tissues, which make up organs, which belong to specialized organ systems. The specialization of these organ systems is what allows us to have such an amazing range of abilities. The major organ systems in the body are as follows:

Our respiratory system handles the exchange of gases that we breathe in, disseminate to the rest of the body, and exhale. Every organ system requires that oxygen, so getting it to those organs systems is dependent on the circulatory system. Our nervous system is in charge of communication between every point in the body and the brain. Our reproductive system ensures that we are able to reproduce and pass on genetic information in a reliable way. Our urinary system works to separate and remove toxins from the body, while also regulating the balance of salts and other compounds in our blood. 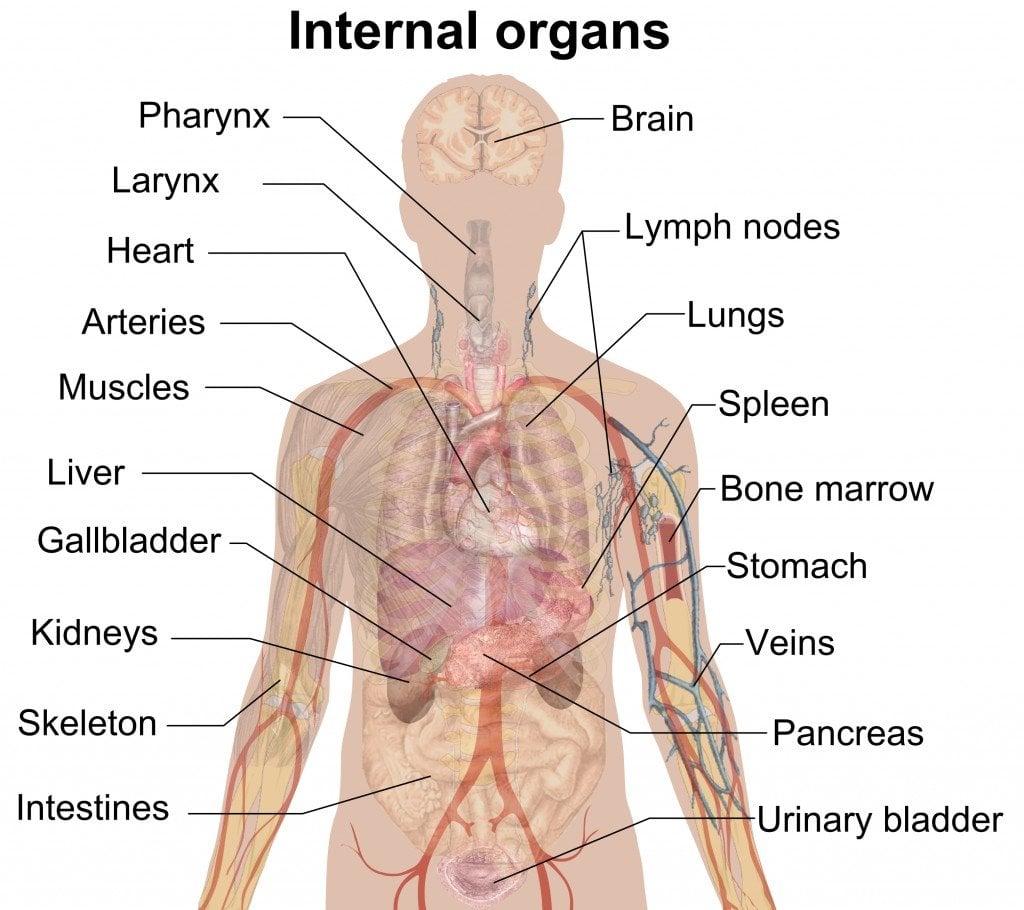 However, despite the intricate nature of these organ systems, they cannot stand alone. Each organ system relies on others to function properly, i.e., all organs and tissues and cells require oxygen, but the main access point for oxygen lies in the respiratory system. The cardiovascular system pumps blood throughout the body, but that blood is cleaned by the liver and kidneys, which are a part of the digestive and urinary systems, respectively.

Due to this interconnectedness, the placement of all these organs is quite important, primarily for efficiency. Fortunately, nature has the ultimate trial-and-error method, and millions of years to make progress, so most anatomical development is quite pragmatic. In other words, it wouldn’t make any sense for the heart to be located in your feet, or any lower in the torso, as it would require more effort to pump blood up into the rest of the body, and the brain, rather than rely on the force of gravity. Similarly, having the bladder up near the lungs or liver wouldn’t make any sense, given the proximity of the bladder to the urinary and excretory organs.

Some organ systems are interconnected, such as the digestive system, which forms a pathway for food from the mouth, down the larynx, into the stomach, past the kidney and pancreas, into the small intestine and then the large intestine, where it will eventually be stored in the rectum and sigmoid colon before being excreted through the anus. The order of these organs, from the top of the torso, down to the bottom, is decided largely by their function throughout the digestive process.

Also Read: Why Are Some Internal Organs On One Side Rather Than The Other? 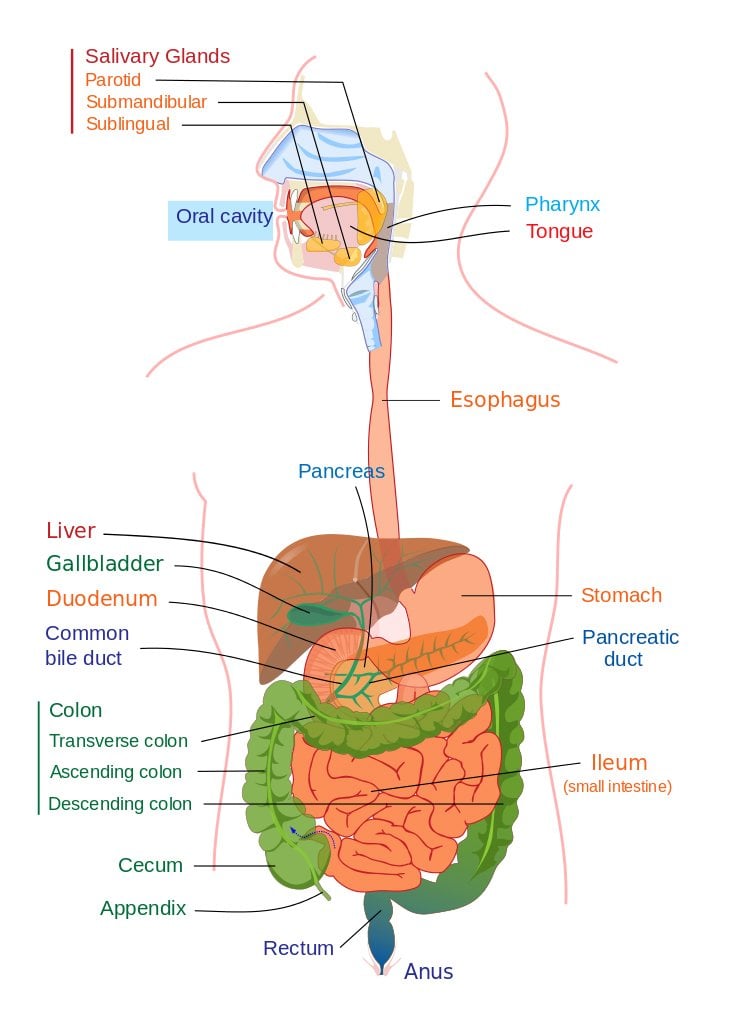 Not every organ is located in precisely the same place within a human body, as there will always be variability based on size, genes, previous surgeries, physical fitness and many other factors, but generally speaking, all humans have the same body cavities in the same places, which contain the same organs. Any variations in organ placement are minor, unless there is some sort of genetic condition causing abnormal development.

Why The Different Sides?

Generally speaking, the organs of the body are arranged symmetrically, either with a pair of organs on the Coronal plane, or an organ arranged on the center line of the body (also known as the Sagittal Plane). However, there are a few exceptions—namely the liver, spleen, stomach, gallbladder and pancreas. You only have one of each of these organs, and they tend to lie slightly off the midline of the body, either to the right or the left. The liver, gallbladder and pancreas are all a part of the digestive system, while the spleen is associated with the blood system. As mentioned above, the major parts of the digestive system are interconnected in a row, but these other organs are more peripheral in nature. The liver is connected to the small intestine via bile ducts, by which bile can be released to help in the breakdown of fats. The gallbladder is attached directly to the bile ducts, as this is where the bile produced in the liver is stored until it is triggered to release it by the stomach. Finally, the pancreas, which is a rather long organ located beneath the liver and gallbladder, is responsible for producing a number of enzymes for digestion, as well as insulin and many other critical hormones needed for bodily function. The spleen is a small, 4-inch wide organ behind the rib cage on the left side of the body.

The organization of these four organs—the liver, gallbladder, stomach and pancreas—are dependent on their function. The liver is an oddly shaped organ, the largest in our body, and there is more space on the right side of the body than the left, as the stomach is often situated more on the left side than the center. The gallbladder must be in close proximity to the liver, hence its right-side placement. The pancreas isn’t “centered” in the body, but simply fits in behind the stomach, below the liver, generally on the left side of the body.  The spleen filters blood and stores white blood cells and platelets, so its proximity to the splenic artery is key, which passes near the back of the stomach. Essentially, vertebrate species tend to develop in a bilaterally symmetric way until a particular point—a symmetry-breaking event—at which point the organs detailed above can begin to develop asymmetrically with respect to their placement in the body. Mutations in the genes that control left-right asymmetry may cause laterality defects, such as body parts being reversed, i.e., the spleen and stomach being located on the right side of the body, while the liver, pancreas and gallbladder will appear on the left. While this condition—situs inversus totalis—only happens to 1-in-10,000 people, and is not necessarily dangerous or fatal, it can make it easier for doctors to make a misdiagnosis based on your presenting symptoms.

Also Read: 2 Eyes, 1 Nose… Why Do Some Organs Come In Pairs? Organ placement in the body is a product of genes, logic and physical space. The human body is also an adaptive and dynamic place, guided by general rules, but not afraid of its own plasticity. In other words, organs may shift and move over the course of our life, but overall, our critical body parts will remain in their familiar organ neighborhood, whether that happens to be on the right or left. What really matters is that everything works properly!