While the normal order of your digestive system consists of food moving from your esophagus into your stomach, and eventually passing into the small intestine for further digestion, nutrient uptake and eventual excretion. Without a stomach, however, that path needs to be shortened, so the esophagus is connected directly to the small intestine via the duodenum. This allows the pancreatic and bile ducts to continue draining into the duodenum.

Yes, you can live without your stomach, but the story is much more interesting than you might expect.

There are a number of organs that you can live without and survive, and while life may be challenging in certain ways, you can generally live normally, provided the surgery is a success. However, removing some organs is more complicated and risky than others. Taking out a pancreas, a kidney or a spleen is relatively simple, and lifestyle changes and medication can often return you to your regularly scheduled life.

However, what about your stomach? It seems like such an integral part of… well, consuming food, that the idea of not having a stomach is pretty terrifying. Is it possible to live without your stomach? And if so… how the heck does that work?

There are relatively few reasons why a person would ever want to have their stomach removed, and most disorders of the stomach can be fixed with medication or more minor procedures. Even partial removals of the stomach are chosen before a complete removal, but when it comes to cancer, doctors don’t like to mess around. There is a particularly tricky form, called hereditary diffuse gastric cancer, which is often signified by a mutation of the CDH1 gene.

What makes this such a dangerous form of cancer is that the early cancer cells are diffusely spread throughout the stomach, making it very difficult to catch early on, and also making it nearly impossible to guarantee a complete elimination of the cancer cells. As a result of this, one of the preferred methods for treatment is actually a preventative measure – the complete removal of the stomach. 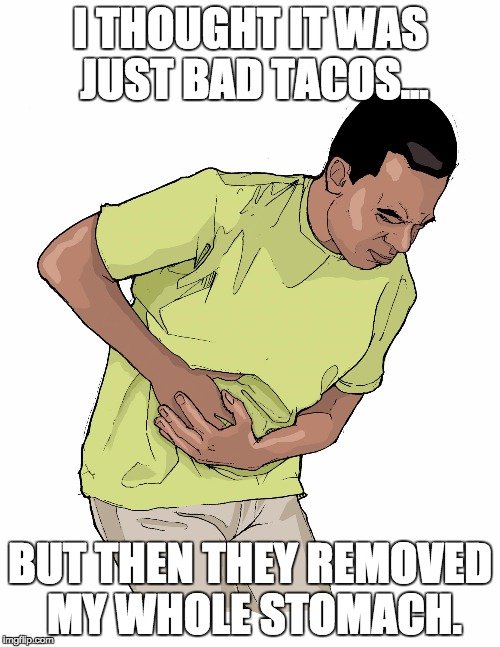 The cancer cells may be scattered throughout the stomach, but if it isn’t present in other organs, why not simply take the entire stomach out? The procedure is called a total gastrectomy (TG), and as you might expect, you leave the OR without a stomach. However, your internal organs are also “repurposed”, for lack of a better word, during the same surgery.

While the normal order of your digestive system consists of food moving from your esophagus into your stomach, and eventually passing into the small intestine for further digestion, nutrient uptake and eventual excretion. Without a stomach, however, that path needs to be shortened, so the esophagus is connected directly to the small intestine via the duodenum. This allows the pancreatic and bile ducts to continue draining into the duodenum.

Life Without a Stomach

When people consider the function of the stomach – digesting the majority of our food so we can get nutrients – it seems impossible that the small intestine could take on that whole responsibility. However, the miracles of the human body are in large supply, and people can return to a relatively normal life after having a total gastrectomy.

For the first few weeks after the operation, patients will primarily be fed intravenously to allow their body and organ systems to heal. At the sites of the incision of the small bowel, small intestine and esophagus, any leakage that occurs there can actually be lethal, so patients will typically be kept in the hospital for 1-2 weeks following the procedure. It can be a painful time, and eating anything may hurt initially, but this is important to get the body back to a “normal” schedule of nutrients.

Following this transitional period, most foods are “back on the table”, and people can function rather normally. Most of the time, smaller meals are suggested, as digestion is not as efficient or rapid when it is all being done in the small intestine. Furthermore, many people suffer from slight nutrient deficiencies following a total gastrectomy, so supplemental vitamins are commonly needed.

Many people suffer from rapid weight loss following a total gastrectomy, so even though it might be painful, and meals must come in small doses, it is important to consume excess calories if possible. Your body also has a lot of healing to do inside, which requires energy, fats, vitamins, minerals and calories to accomplish! Sometimes, patients of a TG are more susceptible to gallstones following the rapid weight loss, and osteoporosis is a larger concern, simple due to the frequency of nutrient deficiencies. It is essential that you pay attention to your body after a traumatic event like an organ removal.

The small meal suggestion is due to something called “dumping”, where the body rapidly deposits food from the esophagus into the small intestine, and the symptoms of this action in the body can be severe. Typically occurring 30-60 minutes after you eat, recovering patients of a TG might experience, nausea, vomiting, cramps and general stomach discomfort, including feeling full very quickly.

Another two hours after this occurs, your body might experience a sudden rise in blood sugar, accompanied by a blood pressure spike, sweating, weakness or even cognitive confusion. To avoid both of these periods after every meal, smaller meals are recommended, and if your diet continues to be a problem, you may want to speak to a nutritionist to plan out the healthiest possible diet and consumption rate, based on your individual case.

Within a year or two, most patients who have undergone a total gastrectomy can get back to living their normal lives, albeit with slightly adjusted eating habits. Once you fall back into a routine, and listen to the needs of your body, life without a stomach may be just as good as before, or even better, since your risk of stomach cancer has completely disappeared!