Before nail clippers, human fingernails were likely worn down through regular daily use, similar to how canine nails are worn down when walked daily on pavement or sidewalk.

Animals have many grooming habits that help them stay healthy and look good to a potential mate, and the same can be said of humans! We have incorporated grooming into every aspect of our appearance, from combing our hair and showering to scraping dry skin off our feet and trimming our beards. Some people spend hours and hundreds of dollars getting their nails done every month, shaping, polishing, and even extending them! Most people simply trim back their nails with rudimentary trimmers that can be found in almost every bathroom in the world. 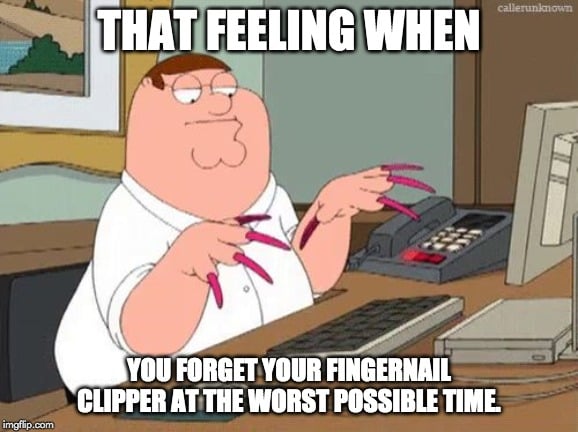 Nail care often differs between men and women, but the bottom line remains the same – our nails grow, and they need to be trimmed back or managed in some way. The question is that tens of thousands of years ago, people still had fast-growing nails, but without our modern tools, how did they keep their fingers looking fresh? What did early humans do before nail clippers?

The History Of Nail Clippers

the clipper on the left is in the plier style; the center and right clippers are in the compound lever style (Photo Credit: Evan-Amos/Wikimedia Commons)

Before we go too far back in time, let’s take a quick look at the nail clippers that we have, whether you use them or not! These days, when you snag a nail on an article of clothing or notice that your crescent-moon fingertips are starting tock annoyingly on your phone screen, there are a few obvious solutions.

Most people go to the bathroom drawer and find the nail clippers, which typically come in two forms: pliers and compound lever. As the name of the former type suggests, this small stainless steel tool looks like a set of pliers, with two metal levers connected at a fulcrum to create a set of “jaws” that can be precisely placed over a nail to trim it. The compound lever type is more commonly seen, with a manipulable lever that can be rotated into place with a concave clipping end.

Both types of nail clippers are highly effective, but they have only been around since the 20th century. Even more rudimentary tools had emerged in the late 1870s, but before that point, the history of this grooming tool becomes much murkier. There have been various literary references to people cutting their nails throughout history, but the tool of choice is almost always a small penknife or a blade. Depending on social status, cultural tradition, and place in history, carrying a knife may have been as common as putting on clothes. Therefore, it makes sense to trim the nails with this readily available tool carefully.

Going back even further, the references to nails being cut or cut dates back to the 8th century BC, so clearly, this has been a point of concern for humans for at least 3,000 years! From Roman satirists pondering the nature of trimming one’s nails in their plays to Cleopatra carefully trimming her fingernails and painting them red, fingernail style and grooming have existed for as long as recorded history.

But what if we want to go even further back? Before humans developed blades or social expectations of hygiene, how did we handle the inexorably growing nails at the ends of our fingers?

The answer to this question is quite simple… fingernails probably took care of themselves. Fingernails are largely made of keratin, a hardened protein that is also found in skin and hair. While keratin is hardy and durable, it is far from unbreakable, as any woman with a chipped nail will attest.

Now, think back 100,000 years, when early humans behaved like hunters and gatherers, engaging in strenuous physical activities to survive. Over the course of their normal days, they might have dug tubers out of the earth, sharpened a rudimentary spear, carried makeshift shelters, or tried to light a fire. With all this manual labor, it is believed that the fingernails would have naturally been worn down and chipped away. The daily demands of survival would have kept the fingernails from growing to unruly or unmanageable lengths. As mentioned above, we also see this passive maintenance in other species, such as dogs, which often walk on pavement, which gradually wears down their nails, thus requiring fewer nail trimmings at the vet. 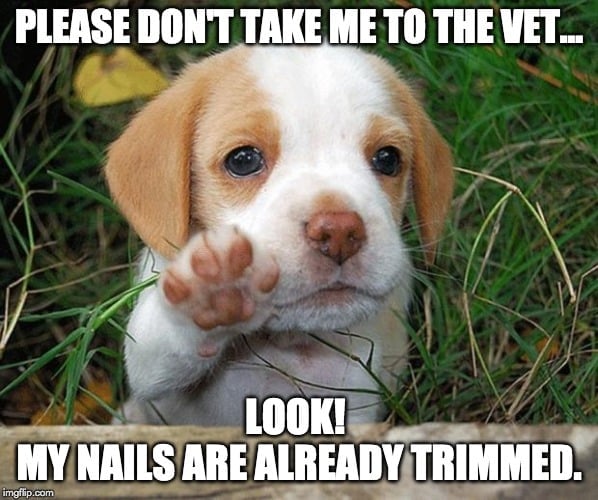 If the fingernails of these early humans did break or chip, they likely solved the problem as we do today – giving them a nibble and maybe tugging off the occasional irritating hangnail. Again, we see the same behavior in other species that lick at, soften, and bite their nails when they grow too long.

Also Read: Why Do People Bite Their Nails?

Everyone has their own personal preferences regarding grooming, but the practice itself has been present throughout evolutionary history. Animals have countless ways of keeping themselves clean and looking good, even trading grooming duties in their hard-to-reach places! There is no denying that grooming is an essential part of our nature. Whether we get our nails carefully manicured every week or anxiously nibble on our cuticles all day, everyone participates in some form of nail maintenance. Grooming is a hygienic practice that dates back millions of years and has cultural significance and social foundations, so if you’re often worried about the condition of your nails, don’t worry… it’s perfectly natural!

Do you remember how humans trimmed their nails before the advent of the clippers?