Human fingernails are actually flattened versions of claws. All primates, including ancient ancestors of humans, had claws that supported their broad fingertips. The broad fingertips helped primates maintain a strong grip around objects, including trunks and tree branches.

We appreciate a lion’s sharp claws, or how an eagle’s talons can clutch and pierce through its prey, but we rarely admire our own nails. They sit on the backs of our hands, inconspicuous, unless we adorn them with nail art or need to trim them. Human nails don’t appear to have much of a purpose, unless it is to relieve an itch or when you need to peel something off. However, they do have a purpose you might not have considered. Human nails are part of the reason for our hand’s dexterity. 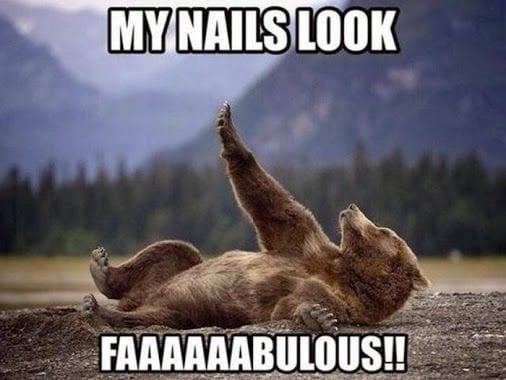 The evolutionary origins of nails

Humans are distinct from other animals in many ways—cognitive capacity, hairlessness, and our opposable thumb—but having nails isn’t one of them. Our ancestors, primates, also have finger and toenails that look like ours. In fact, mammals, birds and reptiles have similar features at the ends of their appendages, such as claws and talons.

These nails or claws or talons are made of a protein called keratin. This is the same protein that makes up your hair, the horns on cows and sheep, and the hooves of horses, zebras, bulls, and other ungulates. 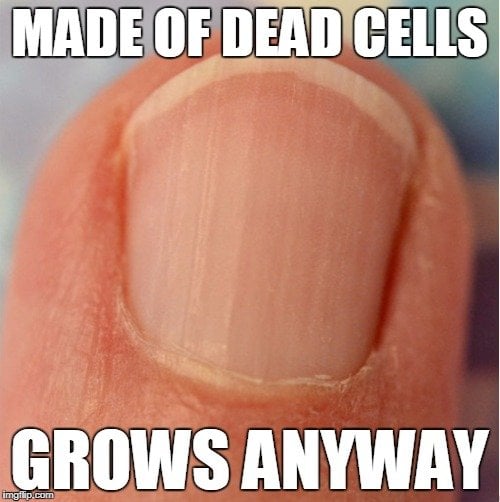 Cells in the matrix called keratinocytes produce the protein keratin that go on to form the nail. The actual nail is therefore composed of layers of dead, compacted cells, along with keratin, which makes it strong and rigid, as well as flexible. As the nail grows and pokes out from your skin, the cells it contains actually die, which is why trimming your nails doesn’t hurt. The same is true for hair.

These keratin extensions evolved sometime between 400 million and 300 million years ago, when four-legged water animals, tetrapods, were venturing onto land. I say ‘sometime’ because fossils between those years are rare. This dark shroud over the time between 360 and 335 million years ago is called Romer’s gap, after the palaeontologist Alfred Romer.

The transition from water tetrapods to land tetrapods is a little fuzzy for this reason, which makes the evolutionary origins of claws, talons, and our own nails a bit fuzzy too. Most of the early evidence for claws comes from track marks left behind by our four-legged ancestors or from a clawed frog, the African bush frog that has claws, which is unusual for frogs and amphibians.

However claws emerged, they proved extremely handy (pun intended). It allowed creatures to grasp better, everything from penetrating the bark and branches of trees, clutching food, and digging. The claws, along with the structure of the limbs, gave terrestrial animals an advantage to climbing trees and diversifying to many other niches.

Our own human nails evolved from claws. Many tree-climbing animals, like squirrels, have claws to clutch tree bark. Similarly, ancient primates that lived approximately 50 million years ago also had claws, new research has found. Teilhardina brandti, the oldest known primate, also had claws, called grooming claws. These grooming claws were used to get rid of parasites that live in the hair and skin, hence the name.

How do fingernails help us?

Our claws, it seems, transitioned to nails for several reasons.

One was to get a better grip on branches, especially smaller and thinner ones. With smaller and flatter nails, it becomes easier to grip these branches, whereas long and sharp claws can get in the way of getting a good grip.

Animals like apes, monkeys, lemurs and others spend a decent part of their day climbing trees, hanging from branches and grabbing things. To do all of that, they need broad fingertips so that their grip stays strong. Fingernails primarily cover the top surface of their fingers and offer some protection. Also, these nails can help the animals scratch and dig for things.

In the high forest canopy where our ancient primate ancestors lived, having wide finger bones and expansive finger pads was useful in gripping narrow branched of trees. Nails enhance that grip even more, by providing a rigid surface to press against. Having fingernails enabled those primates to splay out their pads to create even more contact with the trees.

Nails also enhanced sensitivity by providing an extra surface that could discern changes in pressure even more granularly. This made it easier for primates to climb and hop among the trees. 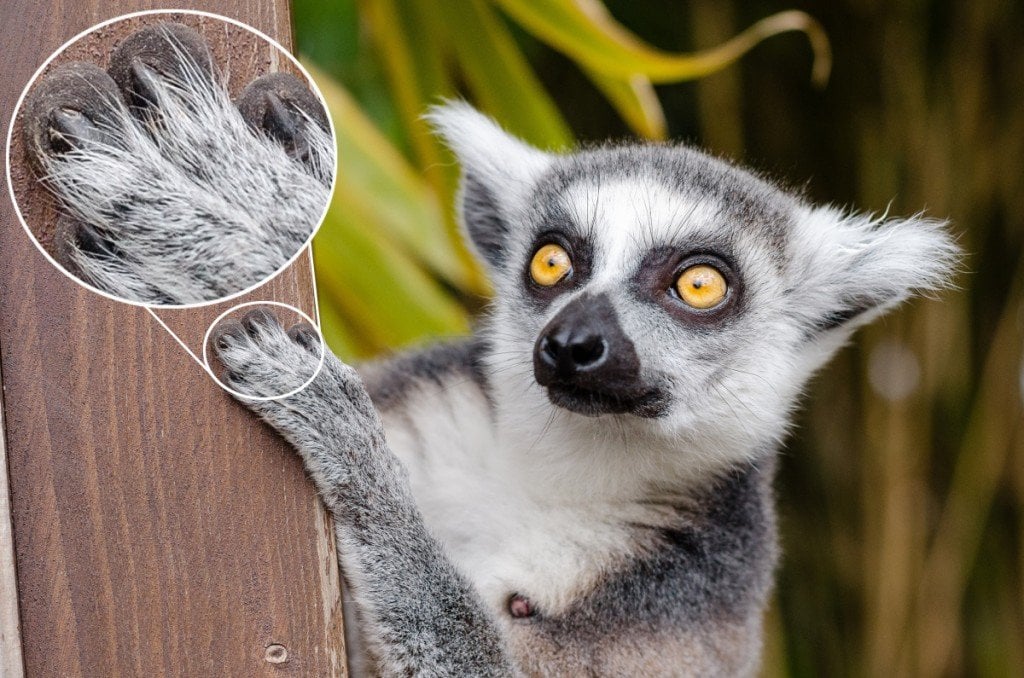 Notice the broad fingertips of a lemur. (Photo Credit : Pixabay)

Fingernails primarily serve as a cover for the top surface of our fingers and offer some degree of protection. Fingernails and toenails on our limbs are quite similar to the claws found in arboreal animals. Primates, including humans, have broad fingertips, and nails help them support those fingers.

These nails also allowed early humans to begin wielding tools. Early Homo sapiens first started using stone tools around 2.5 million years ago. In response to this tool use, our hands have fingernails that are even broader than their predecessors. This is because striking stone tools together requires a very firm, strong grip, something that only broad fingertips can provide.

The fingernail increases the sensitivity of the finger by acting as a counter force when the pulp of the finger touches an object. The hard outer covering of fingernails make our grip around the object much more firm and precise. This is why we can easily pick up even tiny things like screws, needles, peanuts, etc.

Fingernails allow us to peel fruits like banana, oranges, and lemons with ease. Furthermore, it helps in certain cutting or scraping actions, and acts as an extended precision grip for the finger. 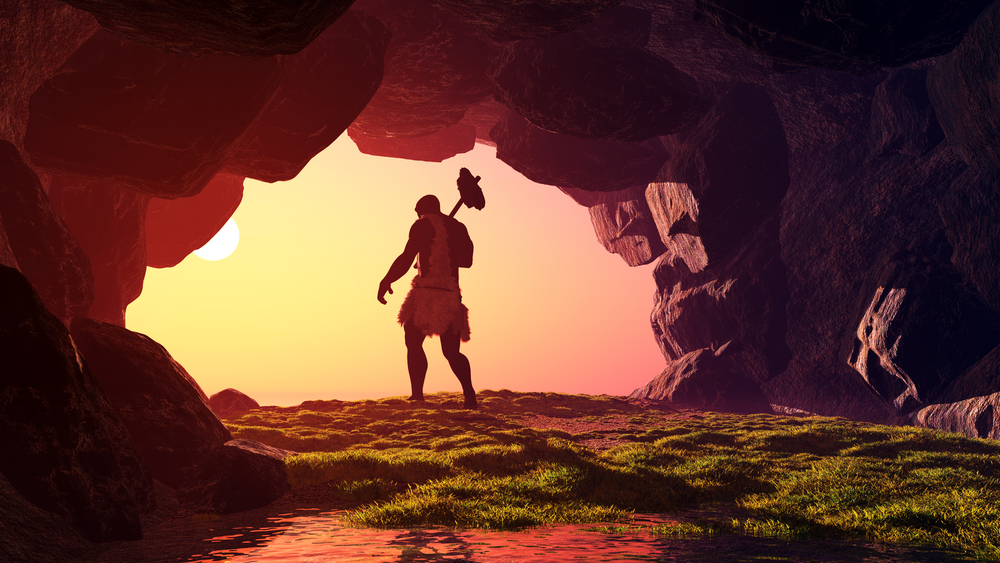 Tool use has change the shape of our hands and our fingernails. (Photo Credit : iurii/Shutterstock)

What about toe nails?

The tops of our toes are susceptible to injuries. The nail layer on the toe serves as a protective cap for the toe to prevent injuries and infections. The hard covering of toenails protects and fortifies the dense network of blood vessels, muscles, and flesh beneath them. Toenails also exert counter pressure on our toes that help us with balance while walking and improves our spatial awareness. People who have lost toenails have reported having problems with their gait.

For our apes, bonobos and other primates, toes and the nails on them help to grip things. Humans, with our biped gait, have lost the ability that apes still have—gripping and grabbing things with their feet. Similarly to fingernails, toenails perform the same supportive function for gripping!