When ice cream melts, it loses much of its air content. Thus, when you refreeze it, it doesn’t look how it looked before melting. The size of the ice crystals also change when ice cream is thawed and refrozen, which makes it look and taste different.

Once upon a time I was invited for dinner at a friend’s place. The food was delectable, but the one thing that really stood out was the ice cream that they served as dessert. I ate as much as I could fit in (after a full meal).

Seeing the way I was going to town on the ice cream, my friend suggested that I take some home. Although my ‘civil instincts’ told me not to, as it might seem too greedy of me, I really didn’t care. After all, he was my best friend, and the ice cream was just too delicious. He packed a box for me.

However, when I reached home and unpacked it, I saw that much of the ice cream had now become a thick, whitish gel-like substance. ‘So what! That’s no big deal. I’ll keep it in the freezer and return my prize to its former glory,’ I thought to myself, and kept it in the freezer. Yet when I took it out to have a spoonful, I observed, to my utter despair, that not only did the ice cream look different (it had become all frosty), but it even tasted somewhat different than how it had tasted back at my friend’s place. It then dawned on me that the majestic taste of the ice cream was gone forever. 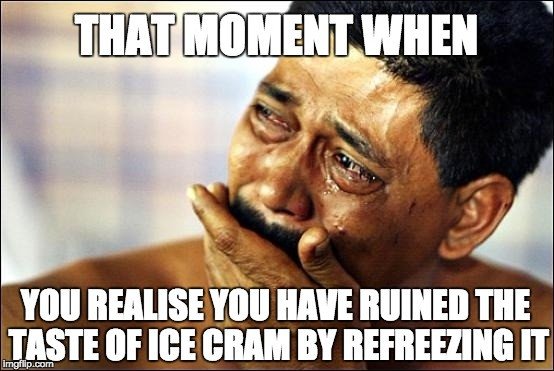 That was the day I learnt my lesson: if you thaw ice cream, and then re-freeze it, it will neither look nor taste the same as it did before you thawed it.

But, why does this tragedy occur? Why should thawed and refrozen ice cream look or taste any different?

As it turns out, the answer lies in the way that ice cream is made.

Ice cream is essentially an emulsion (a mixture of two or more liquids that are normally immiscible or un-mixable), which is ultimately converted into foam by incorporating air cells that are frozen to form dispersed ice cells. 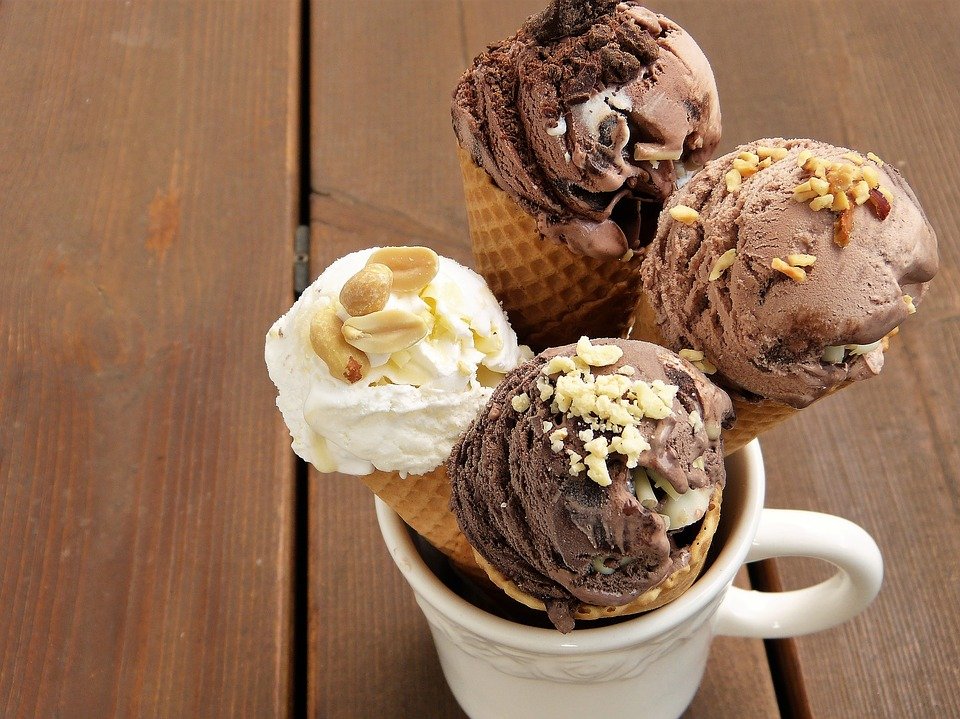 One of the best inventions of mankind (Photo Credit: silviarita / Pixabay)

Regardless of where ice cream is being made (in a humongous factory or your own tiny kitchen), the basic ingredients and the underlying process remains pretty much the same. The standard ingredients of ice cream include water, ice, sugar, milk, milk fat, protein and air (yes, air is also an ice cream ingredient!). There are also some other additives and sweeteners, depending on the kind of ice cream you are going to make.

These ingredients not only decide how ice cream tastes, but also how it looks, smells and even feels inside your mouth.

How is ice cream made?

The process of manufacturing ice cream on an industrial scale consists of several steps, but that’s beyond the scope of this article. We’re going to look at precisely what causes ice cream to lose its original glory once it’s thawed and refrozen. 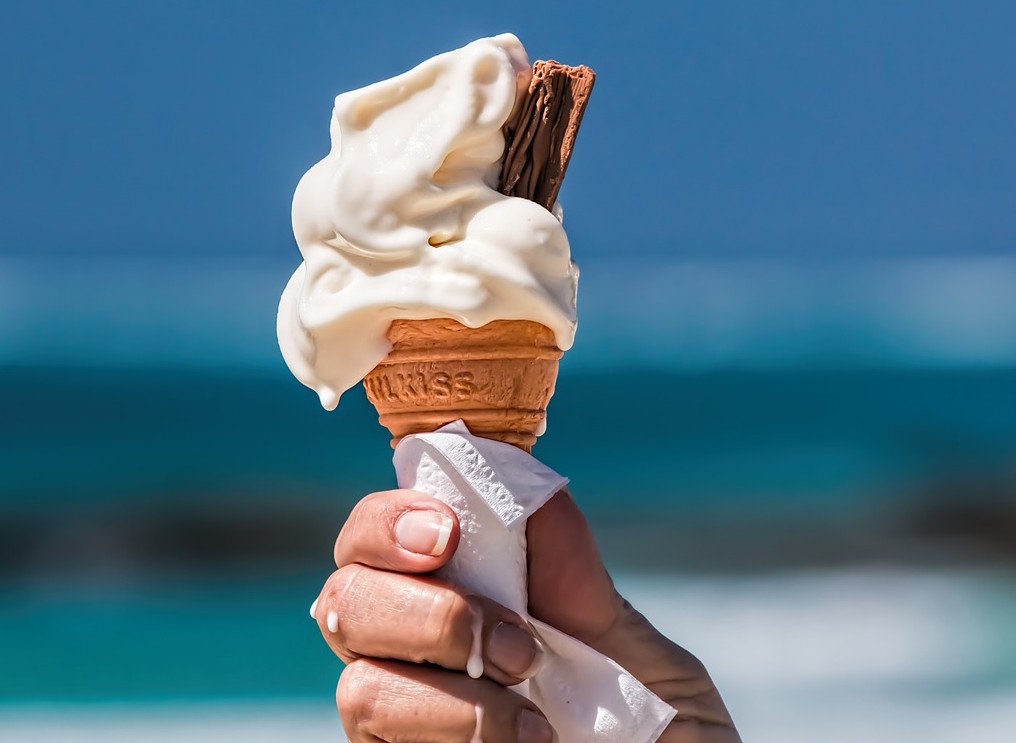 The composition of an ice cream decides a lot of things about it’s going to turn out to be (Photo Credit : Pixabay)

Once you have an ice cream mix with you, containing all the desired ingredients, you first pasteurize it to kill bacteria and then add flavors to it. Once you’re over that part, then comes the part that is relevant to our discussion.

The amount of air in ice cream

You see, the ice cream mix is frozen in an ice cream machine. However, in addition to being frozen, it’s also whipped at the same time, such that both the freezing and whipping of the mix occurs simultaneously. This is very important, as this whipping/churning process is what gives ice cream its characteristic fluffiness and pleasant feeling in the mouth.

When the mix is whipped, small air bubbles are introduced in the mix. The air content in ice cream is called overrun. Technically, it’s defined as the percentage increase in the volume of ice cream over the amount of mix used to produce that ice cream. In simple words, it means that if you start off the process with 10 liters of mix, and after the whipping process, you have 15 liters of ice cream, then you have increased the volume by 50%, so the overrun is 50%. 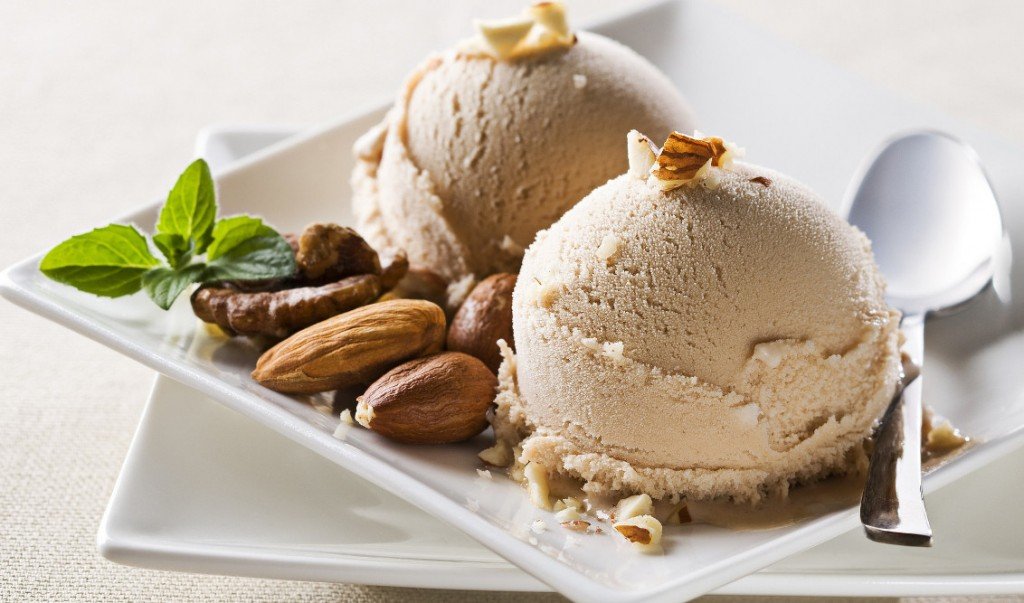 Expensive ice creams usually have less than 50% overrun, whereas cheap ice creams may have as much as 80-90% overrun, which means that they have a great deal of air whipped into them.

Note that air is an important ingredient of ice cream, because without it, it would be similar to a frozen ice cube. When ice cream melts, it loses much of its air content. Thus, when you refreeze it, it doesn’t look how it looked before melting.

There is one more aspect to this: during the manufacturing process, the ice cream mix is chilled and simultaneously stirred. As a result, it freezes quickly and forms numerous small crystals (as opposed to large crystals). However, when you freeze melted ice cream in a refrigerator, the freezing occurs at a slower pace so the melted portion of the ice cream just freezes back into larger ice crystals. That’s why thawed-then-refrozen ice cream is noticeably different from its original form.