On a hot summer day, there are few things as satisfying as a tall glass of lemonade, but a key ingredient of that refreshing beverage is the ice in the glass. If you’ve made yourself a cocktail or two, then you already know that ice can be a strange thing, even though it is a relatively simple and common substance we often overlook. Nothing more satisfying than a glass of lemonade on a sunny day (Photo Credit : Africa Studio/Shutterstock)

You have certainly heard it before—the clear cracking of the cubes as you pour water or any other liquid over them. If you tried to tear them apart in your hands, you would fail, yet pop them in a glass and fill it with water, and suddenly they can’t seem to break fast enough! The question is, what causes this surprising phenomenon, and is there any way to prevent ice from splitting in this way?

Water is arguably the most important substance on Earth, as it provided the pathway towards life as we know it, and is an essential component of survival for every living thing. Not only is it important, but it is also quite unique in comparison to other substances. It is a tasteless and odorless substance that can act as both an acid and a base, and it is a universal solvent, capable of dissolving many other natural substances. Found in solid, liquid and gaseous states on the planet, it is versatile and dynamic, and even has a few surprises up its sleeve. 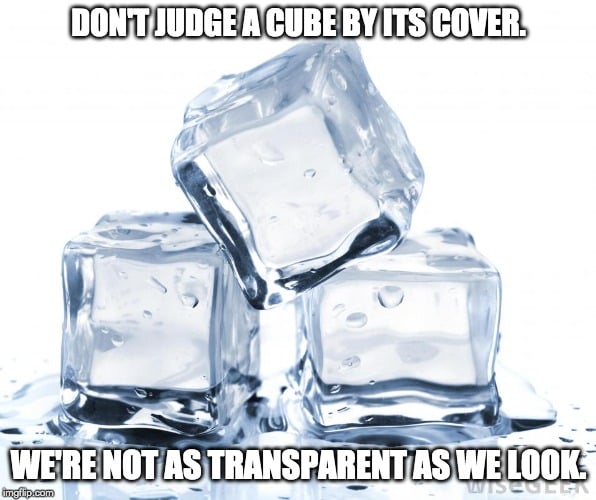 In its liquid phase, the composition of the atoms (two hydrogen and one oxygen) in each water molecule create a dipole moment, wherein there is a partial positive charge on the hydrogen atoms and a partial negative charge on the oxygen atom. This charge differential causes the constant formation and breaking of hydrogen bonds in liquid water as the molecules perpetually shift and move around one another. These hydrogen bonds increase the boiling point of water.

Water hardens into ice (solid phase) when exposed to temperatures below 0 degrees Celsius. However, this is the point where some of water’s unique properties begin to appear. Most other substances take up less volume when they move into a solid phase, meaning that they become more dense as a solid. Due to the crystalline lattice structure of ice, there is actually more space between the molecules in the solid phase than in the liquid phase, which explains why ice floats in water!

This detail concerning the structure of ice under changing temperatures goes a long way towards answering the original question of this article.

Why Do Ice Cubes Crack in Liquid?

As we just explained, ice maintains a rigid crystalline structure when its temperature is kept below 0 degrees Celsius, but when you pour a liquid at a higher temperature over the ice, something unusual begins to happen. As is true in every system, the temperatures of the two substances will begin to equalize, i.e., the ice will begin to warm up and melt, while the liquid will drop in temperature.

The outer edges and surface of the ice cube will be the first areas to experience the drastic temperature shift and begin to engage in heat exchange. The “cracking” sound you hear when you pour that liquid over the ice is caused by a phenomenon called “differential expansion”. More specifically, the outer edges of the ice will begin to contract as the temperature rises, essentially melting and breaking the firm bonds that are maintaining it in a solid state.

On the inside of the ice cube, however, the temperature remains below 0 degrees Celsius, and there is no immediate change to the structure or integrity of those bonds. As the famous saying goes, “a house divided cannot stand”, and a physical rift forms within the ice cube. The contracting outer core snaps off from the immobile inner core, often splitting an ice cube into pieces, or at least delivering that satisfying crackle in your glass. With two different parts of the cube trying to achieve different things in the process of differential expansion, a break is inevitable. After that first crack, you won’t hear as much noise from your ice cubes, but the smaller pieces may also undergo a similar scenario and continue fracturing.

Is There Any Way To Prevent This from Happening?

If you feel intensely triggered by the sound of cracking ice, you may be wondering if there is some way to avoid this entirely natural phenomenon. Well, as you know, it’s rather hard to defy the laws of science, but not all water is created exactly the same. Pure water that is lacking in impurities will result in completely clear ice cubes, whereas tap water and other forms of water that have some impurities will have a cloudy central area in the ice cube.

These impurities include various salts and other minerals, things that don’t perfectly fit into the crystalline lattice structure of the ice cube. If there are small pockets of these impurities, it could actually make the structure of the ice less brittle, and more likely to melt gradually, rather than fracturing. Pure mountain spring water, however, which forms a perfect lattice in its solid phase, will almost always crack and fracture when exposed to warmer liquid.

Even the simplest mysteries in life can be explained by the rigidity of science and our understanding of the natural world. Something as basic as ice cracking when liquid is poured over them may not tickle your curiosity, but you’ve read this far in the article, so that’s a good sign! Next time you’re serving up drinks at a backyard barbecue, try dropping this new ice-related knowledge to your friends and fulfilling your destiny as the life of the party.