Repeated incomplete, unfinished yawns are often manifestations of underlying anxiety or stress. When you are stressed or anxious, you can’t “let go” enough to relax fully and achieve that full muscular stretch, causing a feeling of annoyance or dissatisfaction with the yawn.

The word “yawn” itself is capable of making people yawn. It goes without saying that yawning is contagious, perhaps most obviously because most people yawn when they see someone else yawn!

However, as pleasant as yawning feels, sometimes it is not “completed”, leaving us uneasy or even annoyed.

As you sense an incoming yawn, you close your eyes, open your mouth and feel the familiar tingling in your throat, but then your mouth closes involuntarily, before the yawn is complete, before you have the yawn, so to speak, “out.”

And this isn’t a one-time affair. Incomplete yawns might happen at intervals of 2-3 minutes, partly to complete the yawn. 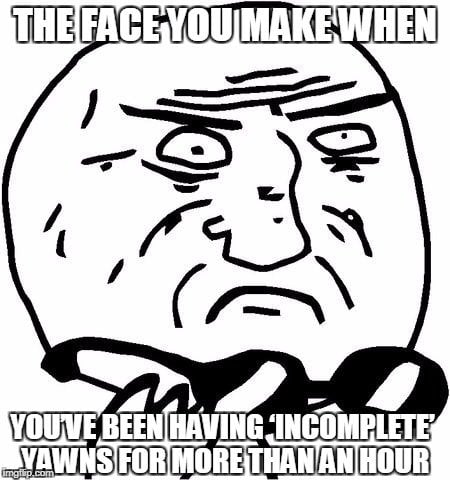 All of this is to say that sometimes you don’t get the sense of relief that you normally enjoy following a “good” yawn.

So why does this happen? Why do yawns not ‘complete’ sometimes?

What is yawning anyway?

If you have pets, then you know that humans are not the only creatures that yawn. Throughout the animal kingdom, from birds to fish, reptiles to mammals, all display the characteristic open mouth and body stretch of a yawn. 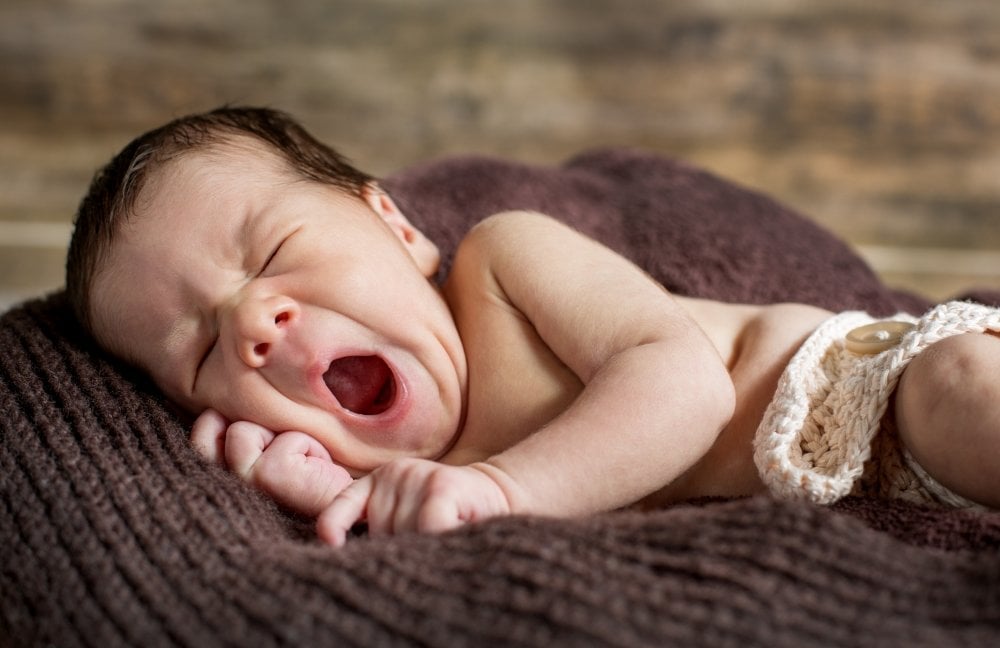 From a purely biological point of view, a yawn is a physiological cascade of movements over a period of 5 to 10 seconds. A yawn is mainly characterized by opening the mouth and stretching the jaw muscle, deeply inhaling followed by a slow exhale. (Source)


You may not notice it, but yawning is not just about opening your mouth. It involves stretching various muscles in the face, neck, and airways. A yawn is a full-body experience.

Yawning is not just about sleep.

Interestingly, 60-70% of people yawn when they see another yawn.

Earlier, experts thought yawning was a sign of sleepiness. When a person yawns a few times, it means that they are ready to go to bed. However, recent evidence shows that yawns aren’t always linked to sleep or even being tired. 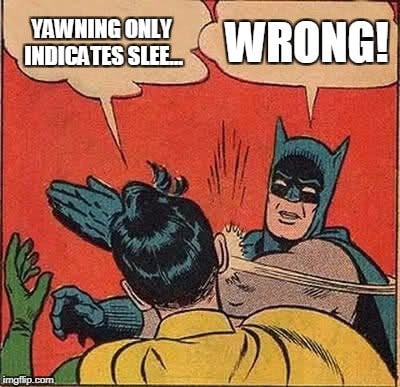 The question of “why we yawn” dates back to the ancient Greeks. Hippocrates believed that yawning was a way to remove “bad air” from the lungs.

Later, 17th and 18th-century scientists thought yawning had something to do with alertness since the action increases blood pressure and oxygen levels in the blood. This would explain why people stretch and yawn after waking from a nap, but studies have not shown that after a good yawn, either heart rate or electrical activity in the brain increases.

Researchers are still studying the question. The late Robert Provine thought that yawning signaled a transition from sleep to wakefulness, or vice versa, from boredom to alertness.

Others suggest that we yawn to lower the temperature of the brain.

A 2010 study by researchers Deborah Fein and Inge-Marie Eigsti, professors of psychology at the University of Connecticut, and their colleagues Molly Helt and Peter Snyder, found that contagious yawning can be an unconscious sign that a subject is attuned to the emotions of others.

Why can’t I complete yawns?

This may sound a little unbelievable, but repeated incomplete, unfinished yawns are manifestations of underlying anxiety or stress coupled with an inability to “let go” fully. The frustration that results has even received a name – anhedonia. 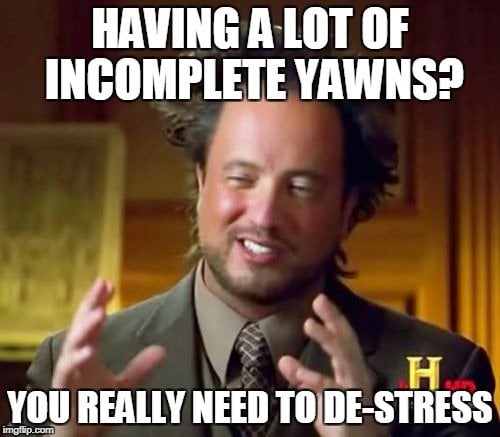 When you yawn, you end up stretching a lot of muscles in the face and the chest, limbs, and abdomen. This stretching sends signals to the part of the brain associated with experiencing good sensations. Being stressed or anxious can prevent completing these actions.

The Thompson Cortisol hypothesis suggests that cortisol, a hormone that plays an important role in stress, is briefly elevated when one yawns. Excessive yawning may be a sign of stress and anxiety, leading to an incomplete yawn in conjunction with an unconscious inability to let go.

If you are stressed or anxious, you will not fully relax and achieve this full muscle stretch, which will make you feel angry or dissatisfied with yawning.

You may be stressed at any given time for various reasons, so it is important to know that the real culprit in incomplete yawning is not the yawn itself but the stress/anxiety you experience at that time!

How well do you understand incomplete yawning!