The act of a sneeze involves a lot of nerve communication and muscle contract throughout the body, causing involuntary actions in the gut, sphincter, throat, sinus cavities and even the eyes, among others. This makes it difficult for the body to resist the instinct to close the eyes before sneezing. However, some people can keep their eyes open when they sneeze, so it is far from impossible. It is simply uncommon.

When something tickles your nose, when you inhale a bit of pepper, or in the midst of the common cold, sneezes are almost unavoidable. These forceful expulsions of air, fluid and foreign particles are the body’s way of reacting to an irritant or substance that it wants to eliminate. The great mystery, of course, is that few people have ever seen themselves sneeze. For generations, there has even been an urban myth saying that if you sneeze with your eyes open, your eyeballs would pop out. That has since been proven to be untrue, but that doesn’t provide a clear answer to the original question… Why can’t we keep our eyes open when we sneeze? 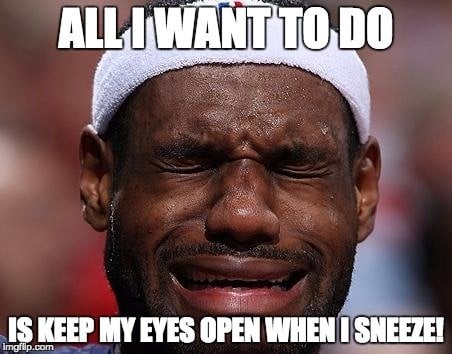 Short Answer: The act of a sneeze involves a lot of nerve communication and muscle contract throughout the body, causing involuntary actions in the gut, sphincter, throat, sinus cavities and even the eyes, among others. This makes it difficult for the body to resist the instinct to close the eyes before sneezing. However, some people can keep their eyes open when they sneeze, so it is far from impossible. It is simply uncommon.

The Science of a Sneeze

A sneeze is the common term for what happens when your respiratory system expels unwanted particles from the nose, typically preceded by some sort of irritation or inflammation. However, the scientific term for a sneeze is a sternutation, and this is a violent expulsion of particles, accompanied by an audible expiration of breath, from both the nose and mouth.

These sternutations are closely related to the immune response of the body, as well as the presence of histamines and other particles/chemicals that are linked to the body’s allergic reaction process. When these chemicals are released, typically by inflammatory cells detecting an unwanted foreign substance, it sends out strong nerve signals, which are received and processed in the brain, causing a reflexive action, i.e., a sneeze. This can be caused by common allergens, smoke, pollutants, chemicals, mucus, perfumes and a number of other particles or irritants in the air.

In the moments before and during a sneeze, a lot of things happen in the body. First of all, your chest muscles tighten in preparation for a massive exhalation of breath, and then pushes it upwards. At the same time, the throat shuts, forcing the air through your nose at high speed. While many people used to claim sneezes could travel at up to 100 mph – or even faster – the majority of the expelled particles move at roughly 10 mph. However, a single sneeze can push out up to 5,000 droplets, some of which are filled with bacteria (particularly if the sneeze is caused by a cold).

Aside from the those obvious physical actions that make up a sneeze, there are also some involuntary reactions by the body. Muscle systems affecting the esophagus and facial muscles tend to flex unconsciously, the sphincter usually tightens when the chest muscles push up that huge amount of air, and the eyes squeeze shut an instant before a sneeze hits. In fact, some sneezes can even cause the eyes to water. The eyelids closing in preparation for a sneeze is a bodily reflex, that is not a necessary aspect of sneezing. Experts have shown that some people can forcibly keep their eyes open without any damage or danger. In that case, why do the eyes close at all? 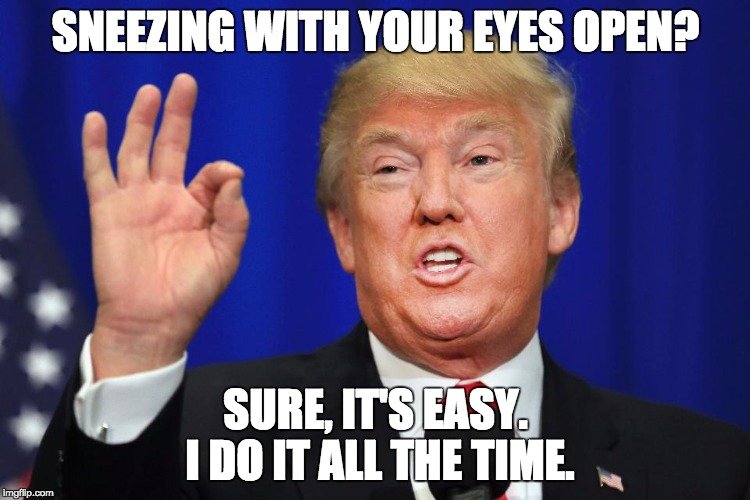 One of the most common explanations for why the eyes close during a sneeze is because they are trying to protect themselves against whatever is being expelled from the nose. Just as a cough is meant to expel irritants from the throat, sneezes expel irritants from the nose, including pollutants, perfumes, smoke, allergens and pathogens. The eyes are extremely susceptible mucus membranes where many of those same substances could cause problems or irritation. Basically, the body doesn’t want to sneeze out a cloud of irritants only to have them immediately end up in the eye.

The force of a sneeze is also a factor in why the eyes close. In preparation for a sneeze, your facial muscles tense involuntarily, in preparation for the powerful expulsion of air. Pressure in the sinus cavities is intense in the seconds during a sneeze, and while this force is far from powerful enough to pop the eyes from your head (as so many playground stories warn), it is enough to be painful, and possibly even cause capillaries or blood vessels in the eye to rupture.

The eyelids closing before a sneeze is likely a reflexive trait that has been developed over thousands of generations, but it is important to remember – it IS POSSIBLE to sneeze with your eyes open. Either by holding the eyelids open or simply controlling the muscles enough to overcome a reflex, some people are able to witness the grand (and gross) event of a sneeze.

However, for your health, and for the health of others, we recommend your cover your mouth and keep your eyes closed; if you’re really curious what your “sneeze face” looks like, simply flip your smartphone screen around and take a video!