The reason you should always cover your mouth when you sneeze is because when you sneeze, you are ejecting small particles and germs into the air. These particles can then land on other surfaces or be inhaled by other people, thus spreading potential infections.

As children, it’s rather common for our parents to chastise us when we forget to cover our nose when we sneeze or cough. Obviously, by covering your mouth, you are blocking the flight of small particles and germs that are expelled during a violent sneeze. Remember, sneezing and coughing are typically the result of irritation in the throat tissues and sinuses, often caused by foreign objects or pathogens.

When we sneeze or cough, we are essentially ejecting these particles out into the world, free from our bodies, but that means they can land on other surfaces or be inhaled by other people, thus spreading potential infections. For decades, researchers believed that the “germ radius” of a sneeze wasn’t more than a few feet, with the larger droplets being the most dangerous, as they experience ballistic motion and had significant momentum, due to their mass. Unfortunately, that belief has recently been proved incorrect. The question is… how far can a sneeze really travel?

Short Answer: Unlike earlier beliefs of a few meters, small droplets can actually travel up to five times father, while the very smallest drops (less than 10 micrometers) can travel up to 200x farther than previously believed.

The Science Of A Sneeze

When you feel that tickle start to come at the back of your nose, you probably don’t think much about science or mathematical models, but when researchers were trying to understand the true aerodynamics of a sneeze, they needed to make some calculations. See, in the past, the droplets that are shot out of your nose when you sneeze were treated as independent particles, with no interaction. Therefore, their trajectories and distance could be calculated based on their mass and velocity.

A recent study at MIT, however, using high-speed imaging to capture the detailed activities within the cloud of molecules and particles that you expel during a noisy sternutation (fancy word for a sneeze). Aside from the particles themselves, which you can usually catch in a tissue or the crook of your elbow, there is also a large gas cloud that is pushed out during a sneeze. Within that cloud, there are actual currents, which can sweep many of the smaller drops up and circulate them back through the cloud as it moves in a given direction. By re-suspending these drops and carrying them further, germs and micro-particles can travel dozens of meters, if not hundreds, by effortlessly riding the gas cloud.

Also Read: Is It Better To Cover A Sneeze With Your Hand Or Elbow? 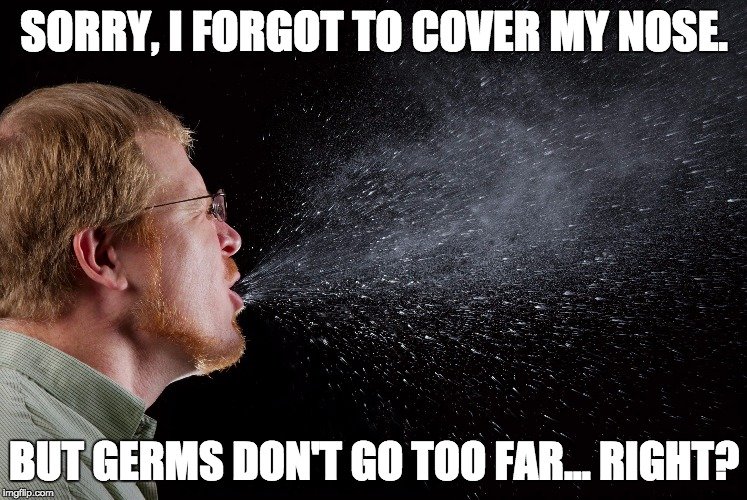 The gas cloud is scientifically referred to as a multiphase turbulent buoyant cloud, since it is not solely composed of gases expelled during the sneeze. This gas cloud will then interact with the ambient air, mixing and blending with it, and also being affected by any currents of airflows within the surround atmosphere. This gives the germs and particles released during a sneeze an extremely unpredictable travel pattern.

Researchers used to think that the “germ radius” only consisted of droplets that could be physically seen, so the range of potential infection was rather limited – a few meters at most. This recent discovery proves that the range for containment and possible spread of germs is much larger. In other words, if you have the sniffles, or a hacking cough, forgetting to cover your mouth isn’t just gross for the people sitting next to you, but for everyone in the entire room!

While this isn’t a world-changing revelation, it does have certain ramifications for people worried about the spread of germs, particularly in a professional setting. In places that rely on air filtration systems to cut down on airborne pathogens, such as airplanes or hospitals, this information changes their perspective completely. The “pathogen footprint”, namely where a pathogen goes once it is released from a person’s body, is incredibly important to understand in the battle against infectious diseases and their spread.

If these microscopic droplets can spread across an entire room in a matter of moments, they can also be sucked into air vents and spread to other locations, potentially infecting people in other rooms or wings of buildings. By understanding how germs are spread, defenses can be tightened, such as more regular cleaning of air vents or the development of air filtration systems that can capture tiny droplets as small as 10 micrometers. 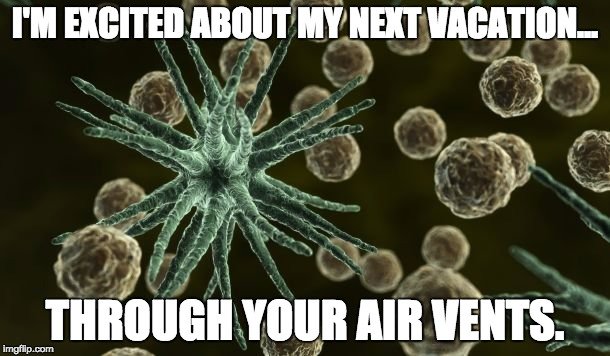 Using the crook of your arm or a tissue is certainly preferred, but now that researchers understand the true range of a germ-filled sneeze, they may be able to take steps to further minimize the spread of infections diseases! Who knew that the world of sneezes was so dynamic! Gesundheit!