Pepper contains a volatile compound called Piperine. Piperine is released when pepper is crushed. When this compound reaches the nose, it irritates certain receptors in the nose. These receptors initiate a sneeze respond to get rid of the irritant, piperine, from the nose.

As a kid who loved Tom and Jerry, watching Jerry fall into a sneezing fit inside the pepper shaker is a classic, but that obviously brought up a few questions in my head.

I went to the kitchen and tried to make myself sneeze using pepper in the same way (I was a weird kid, I know). To my initial amusement, I sneezed and sneezed… and then sneezed some more. Let me just say, by the time I was finished, it was no longer such a pleasant experience.

If you spend any time in the kitchen, chances are good that this grey-black dust of the peppercorn has likely caused you to sneeze once or twice, forcing air out of your nose at about 100 miles (161 km) per hour!

Have you ever wondered what it is about pepper, in particular, that makes us sneeze so readily? What makes pepper so special? There aren’t many spices that have this effect. One spice with a somewhat parallel effect is red chili, which induces a similar sneeze reflex, but there is one difference—it is also accompanied by pain!

Peppercorns, whether whole, crushed or powdered, are a commonly used spice in almost every cuisine of the world. The peppercorns we eat are actually fruits of the Piper nigrum plant, which is part of the Piperaceae family, a flowering vine native to the tropical and subtropical regions of India. Piper nigrum is the most common source of black pepper.

Helen of Troy’s face may have launched a few hundred ships, but these tiny insignificant-looking red and green balls have, to their credit, launched a few ships in their time too, including the Nina, Pinta and Santa Maria! These were Christopher Columbus’ ships that set out west to find spices like pepper, but ended up finding America instead! A basket of different types of peppercorn. (Photo Credit : Gethin/Shutterstock)

There are many organic compounds present in pepper giving it that typical pungent odor and its tasty properties. Almost 600 compounds have been isolated and identified from black pepper thus far. That’s a whole lot of punch packed into one little peppercorn!

One of these compounds is responsible for triggering the sneeze reflex…

The main component of black pepper and the secret to its spicy and pungent qualities is piperine. This alkaloid (organic compound containing nitrogen) is what makes pepper one of the most widely used spices in the world. The concentration of piperine per peppercorn varies, depending on the strain of the pepper, between 2% and 7.4% of its constituents. Naturally, the higher the piperine content, the greater the resultant irritation in the nose, meaning a more intense bout of sneezing. Piperine engages certain receptors in the nose and irritates nerve endings. When these receptors are stimulated, they trigger a biological reflex response to push out the irksome pepper that has gotten inside.

Sneezing is basically a defensive response to ensure that the nose and the receptors are free from the discomfort of piperine as fast as possible. This is how our noses “scratch themselves from the inside”, so to speak.

Just as dust irritates sensitive noses, it is the finely ground powder of peppercorns that triggers an irritation response. When the piperine is bound in the whole peppercorn, it cannot enter the nose nor interact with the receptors. However, grinding the peppercorns to a fine dust releases the piperine into the air and the fine dust of pepper further exacerbates the irritation, simultaneously triggering an extensive number of olfactory receptors that then induce a sneeze.

Another similar nose aggravator is red chili, with capsaicin as the main culprit. This compound found in the chili family irritates a different set of receptors. These receptors are directly connected to one of the main nerves of the brain, the trigeminal nerve. Stimulating this set of receptors not only leads to sneezing, but also the sensation of pain.

This phenomenon is even exploited by scientists. When participants are required to sneeze for experimental purposes, such as to test how good masks are at catching bacteria or viruses (e.g., the coronavirus), scientists make them sniff pepper powder, which is sometimes called the pepper stimulus.

If scientists waited for participants to feel a spontaneous sneeze coming on, it would take forever to complete a single study! It’s much easier to just shove some pepper in their noses. These participants should be grateful that we have a painless option! 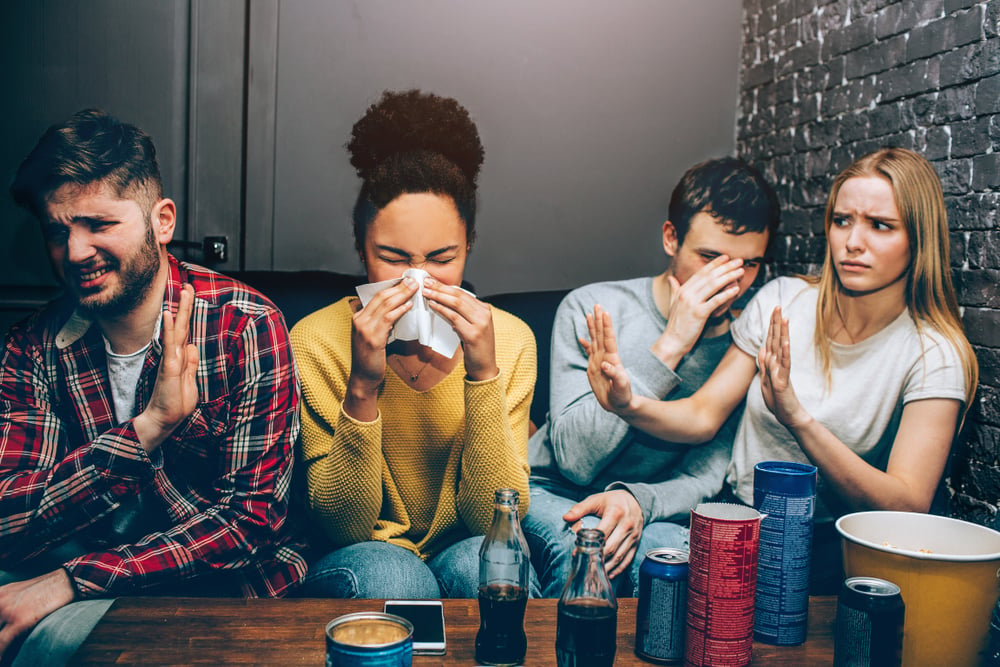 Pepper is a key part of many recipes, so don’t be surprised if you start sneezing if a recipe calls for some. Just take care not to sneeze into your food—or anyone else’s!

Pepper, no matter how irritating it is when inhaled, is quite delightful on the tongue, so swearing off pepper to avoid its effects is unrealistic.

If you’re out in public these days and need to sprinkle some pepper on your food, just be careful not to inhale it; these days, COVID-19 has made sneezing in public the ultimate social faux pas, even more than belching or farting in public!