The main reason that the abdomens of malnourished children are bloated is because they are not getting enough protein in their diet. This protein deficiency disrupts their lymphatic system, which is responsible for pushing fluids from tissues into the bloodstream. Without enough protein, the body has no energy to carry out these metabolic processes, leading to an accumulation of fluid in the gut and tissues.

In the thriving West, corpulence is typically associated with only one thing – excess food… excess fat cells to be more precise. However, pictures of impoverished children living in not-so-thriving nations seem counterintuitive. The children’s appearance run contrary to the most common of adages voiced by parents to guilt-feed their picky children. Malnourishment and a bloated abdomen don’t seem to go hand in hand, so the disturbing images induce what is called cognitive dissonance. 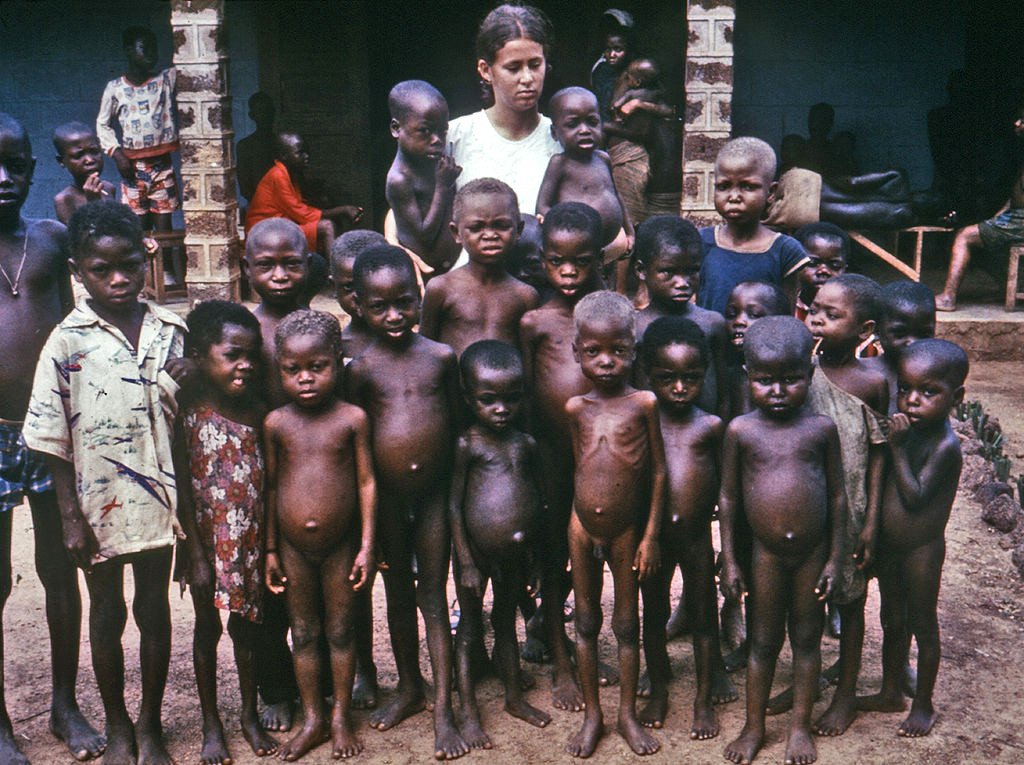 There is no doubt that these children are malnourished. This is evident from their gaunt, twig-like arms and their skin, which wraps their bones so tautly that it seems incapable of being pinched. However, their malnourishment is not like a severe case of anorexia. Malnourishment accompanied by an unusually distended belly is caused by the deficiency of a highly crucial nutrient – protein. This type of malnourishment is known as Protein-energy Malnutrition (PEM).

Undernourished children can be subject to two primary PEMs – marasmus and kwashiorkor. However, it is the latter that leaves children with a swollen abdomen. Kwashiorkor is severe protein-energy malnutrition that is characterized by edema — an unhealthy accumulation of fluids in the cavities of the body — and a liver filled with fatty infiltrates. It is most frequently diagnosed in children dwelling in societies fraught with poverty and famine.

The term was coined by Jamaican pediatrician Cicely Williams, one of the first female graduates of Oxford University and a lauded pioneer in the studies of maternal and child health. Although she had previously introduced it in her academic papers, the word made its first public appearance in a Lancet article written by her in 1935. It is derived from the Ga language of Ghana and roughly translates to “the sickness the baby gets when the new baby comes”. It is named as such because it reflects the development of a condition in an older sibling who is weaned away from breast milk due to the birth of a newborn younger sibling.

Breast milk is an infant’s primary source of protein and amino acids, vital nutrients whose deprivation could gravely threaten physiological and mental development. Despite consuming a diet replete with carbohydrates, it is the scarcity of protein in their diet that makes them a victim of this malady. The children’s calorie intake mainly constitutes the consumption of food like rice, cassava and yams, foods that are rich in carbohydrates, but possess lmost no protein. This lack of protein disrupts their lymphatic system.

The lymphatic system is responsible for three critical functions. The first one is the recovery of fluids, the second is the monitoring of our immune system, and the third is ensuring the absorption of lipids. Owing to their undernourishment, the patients of kwashiorkor are denied all three of these functions. Fluid recovery is the process of pushing fluids, such as water, from tissues into the bloodstream. The pressure to push these fluids is generated by proteins, which, due to their larger size, become stuck and cannot escape through the crevices in the capillary walls. The pressure of proteins must overcome hydrostatic pressure and draw water out of the gut via osmosis.

However, in the absence of any protein, the pressure is lacking, leading to an accumulation of fluid in the gut and tissues. Deprived of protein, the body essentially has no energy to carry out these seemingly menial metabolic processes. This pooled liquid in the gut impels it to bloat, while the retained fluid in the tissues spurs edema. Other than edema and a distended abdomen, kwashiorkor patients also suffer from the premature loss of teeth, thinning of hair and depigmentation of the skin. Diagnosis and treatment often leave patients with stunted growth; however, this is much better than a delayed diagnosis, which can be fatal.

Treatment usually entails the reintroduction of a diet that is rich not only in protein, but also in other essential elements, including mineral salts and vitamins. A dietary deficiency disease can only be treated by adopting a well-balanced diet, something that is currently out of the reach for many of these indigent families.