Lionel Messi is an incredible soccer player and is considered by many to be the best player in the world. There are a number of reasons why Messi is such a prolific dribbler. Firstly, he has a low center of gravity, which allows him to stay on his feet even when he is surrounded by opposing players. Secondly, he is extremely quick and has great endurance, meaning he can sprint for long periods of time without tiring. Finally, Messi is also a very creative player, often coming up with new and innovative ways to beat his opponents.

Lionel Messi is dubbed to be the greatest footballer of all time. Born in Rosario, Argentina, Messi currently plays club football for FC Barcelona. Initially, Messi began as an out-n-out right-winger who would dribble or cut inside with his dominant left foot to either shoot or play an incisive, defense-splitting pass through the middle.

Eventually, under Pep Guardiola’s reign, Messi operated as a false-9, a striker who drops deep and receives the ball a little deeper, to interlink with his midfielders. Nowadays, Messi can be found operating almost anywhere on the field, either cutting in from the right or sauntering in the center of the pitch. This roaming role can be partly attributed to his footballing vision and creativity, and partly to his peerless dribbling ability. Messi often maliciously trespasses the defenses of his opponents by expertly dribbling past people and opening spaces behind them. In this vacant space, even a tiny window of seconds is enough for Messi to look up and find his teammate with a darting pass.

His signature move is the feint, a move where he performs a shimmy and shifts the ball swiftly on to the other leg such that the opponent, now mesmerized, misjudges the movement, commits to the wrong direction and tumbles to the ground due to his inertia. However, lately, he’s more admired for his cheeky nutmegs.

As a 10-year-old, Messi was diagnosed with a growth hormone deficiency, which rendered him with a very small stature. It prevented him from growing as much as other children would. The treatment would cost his father at least $1,000 per month. Recognizing Messi’s audacious talent, however, FC Barcelona signed him following his trial. The contract included the payment of his remedial costs as well. Today, Messi still slightly stout, stands at 170 cm. 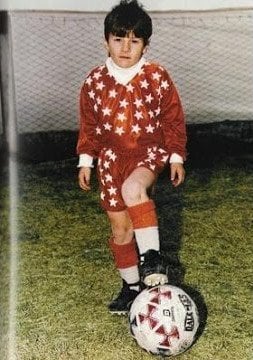 Despite this medical adversity, Messi’s genetic predicament serendipitously made him one of the greatest footballers of all time. He is scientifically designed to be the best. This is certainly a very bold claim, but simple physics will show that it’s true.

I also want to assert that height doesn’t necessarily imply high-quality footballing ability. A number of footballers other than Messi are short, but they have accomplished far from what Messi has. This discrepancy, of course, comes down to other factors, which I will discuss in the last section of the article.

Commentators often describe Messi’s dribbling by resorting to platitudes such as “the ball is glued to his feet.” Despite being physically disadvantaged, Messi seldom topples or tumbles to the ground after being jostled in a crowd of sturdy opponents. His command over the ball is indisputable. This tenacity can be attributed to his low center of gravity. 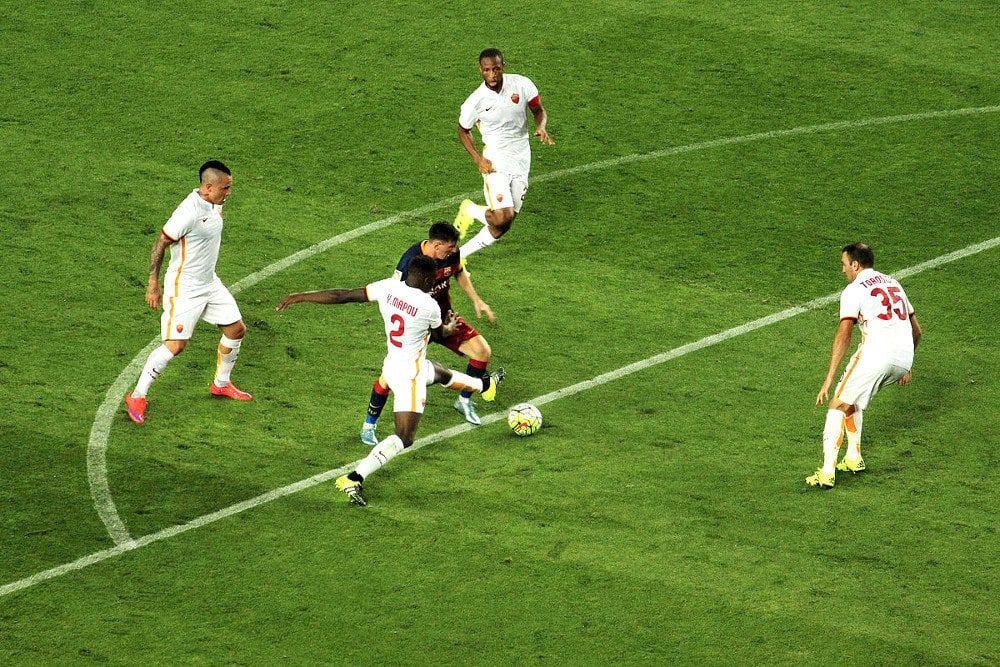 When the force of gravity acts on a body, every constituent particle of this body is attracted towards the earth. The resultant force is the body’s weight. However, through which point does this resultant force act? To put it in another way, the individual forces can be summed into a single force that acts on a single point on the body. This hypothetical point at which all the body’s weight is concentrated is known as the body’s center of gravity (COG).

COG is a point where all the individual weights are balanced. It is not fixed and varies depending on the weight and distribution of this weight within a body. For a perfect sphere, this point lies in the center. However, gravity acts in more complex ways as the shape of the body changes.

Still, despite a distorted shape, there exists a point where all the forces are balanced, but it is not located at the very center of this body. The COG of human beings is estimated to be roughly around the waist. One important finding is that it is lower for shorter and stout bodies, and higher for taller bodies.

A person’s center of gravity is intimately related to balance and stability. Imagine gradually bowing your head towards the ground. At every step of tilting forward, your COG shifts upwards, where the weight increases. Without any shift in footing, the pull of gravity on this new point will act as a torque and “turn” you on your heel, forcing you to fall down.

The tumbling force depends on the distance between this new point and the original center of gravity. This implies that taller people will have a hard time balancing when assailed by numerous pushes. On the contrary, because this distance is smaller for shorter people, their balance is more difficult to disrupt. Even though taller people may find it more difficult to bow, they can achieve stability by reducing their COG by, say, sitting on a chair. Low COG is the reason why the army’s vehicles are short and stout. This allows them to turn at swift speeds without tumbling over. (Photo Credit: U.S. Navy photo By Photographers Mate 3rd Class Shawn Hussong / Wikimedia Commons)

This principle becomes easier to apprehend when we make an analogy to doors. A door can be forced wide open with the slightest of pushes when the force is applied on its edge. Whereas, opening it becomes progressively more difficult as our point of contact moves closer to the hinge. The zenith of resistance is observed when this point is directly adjacent to its hinge. As the point of contact moves further from the hinge, the door becomes easier to open.

Returning to Messi, perhaps now we can understand why, despite the incessant kicking and pushing, Messi manages to stay on his feet. His low COG also allows him to decelerate and accelerate in short bursts. It is fairly acceptable to claim that Messi was genetically built to become if not the greatest, then one of the greatest footballers to ever embrace the game.

No athletic analysis would be impartial without acknowledging the Nature vs Nurture debate. Yes, Messi has a lower center of gravity and persists in staying on his feet, but more importantly, despite the nudges, he manages to hold onto the ball. Thus, the “glue” metaphor, but does this apply to every stout footballer that has stepped on the pitch? Eden Hazard, Sergio Aguero, and Alexis Sanchez are other prolific dribblers whose abilities can be partially attributed to their short stature and consequently, their low COG.

The attribution of this incredible dribbling ability to his genetic makeup, his nature, is unfair to the years of vigorous training he put himself through during his adolescence. Even though Mozart was genetically designed to understand music, without practice, it would’ve all gone down the drain.

Without deliberate practice, Messi couldn’t possibly achieve greatness, as is true for anyone! Being physically weak, Messi wasn’t going to outmuscle his way through a defense. His passion and desire for winning led him to develop a unique form of strength and train harder to compete with the elite of the sport.

However, back to the aspect of nature, Messi illustrates a lethal combination of endurance and speed. One research concerning dribbling a football revealed that dribbling a ball significantly aggravates the energy cost and exertion of motion, as well as augmenting blood lactate when done at high speeds. Blood lactate levels refer to the production and accumulation of lactic acid. This is the same acid that is responsible for the burning and fatigue we experience in our muscles following an intense work out session. Moreover, Messi’s abrupt bursts of deceleration and acceleration to execute his feints are more physically taxing than merely sprinting, as these movements “accentuate metabolic loading.”

Why is this important? A study revealed that the characteristics of speed and power were influenced 30% to 90% by genetic factors, while peak oxygen uptake or endurance was influenced 40% to 70% by genetic factors. Messi was naturally gifted with these traits, although again, it would be highly unfair to dismiss nurture and put nature on top of the pedestal.

Following his trial in 2000, first team director Charly Rexach wanted to sign the child prodigy immediately. In an absence of legal documents, Messi signed his first contract on the back of a paper napkin. The slim, taciturn — to the extent of being perceived as mute — child helped Barcelona win a myriad of accolades and went on to win a record five Ballon d’Or awards. Messi has wone practically everything, except the crown jewel of football, the World Cup, something that Maradona did. 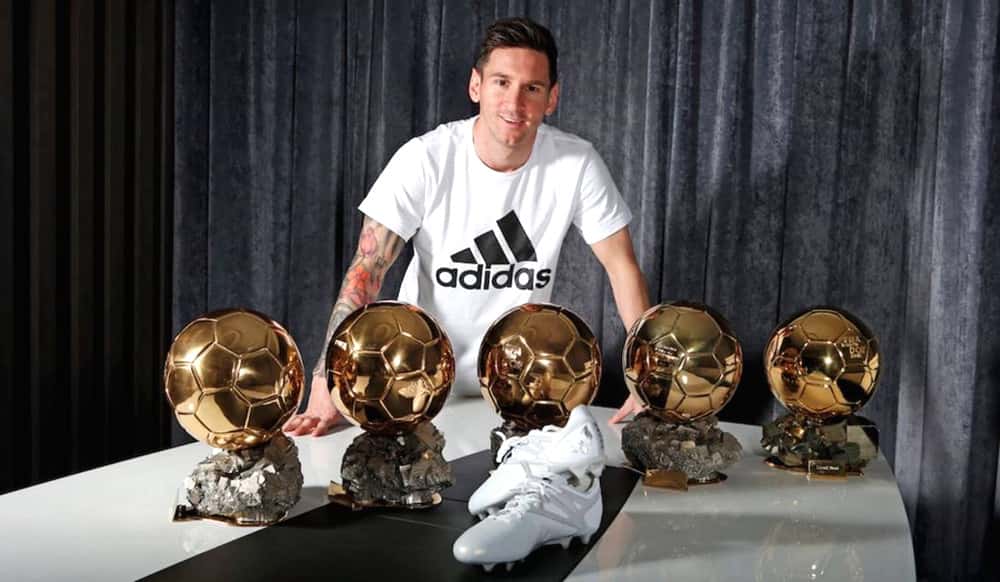 With over 600 senior goals, Messi is the highest goal scorer in the history of FC Barcelona. Celia, his maternal grandmother, accompanied him to training and matches as a child. Celia died shortly after his eleventh birthday, which gravely affected young Messi. He celebrates his goals by looking up and pointing to the heavens, as a tribute to her.